‘It May Simply Seem Like a Lamp, But Her DNA is Inside It’: A Tribute to Zaha Hadid 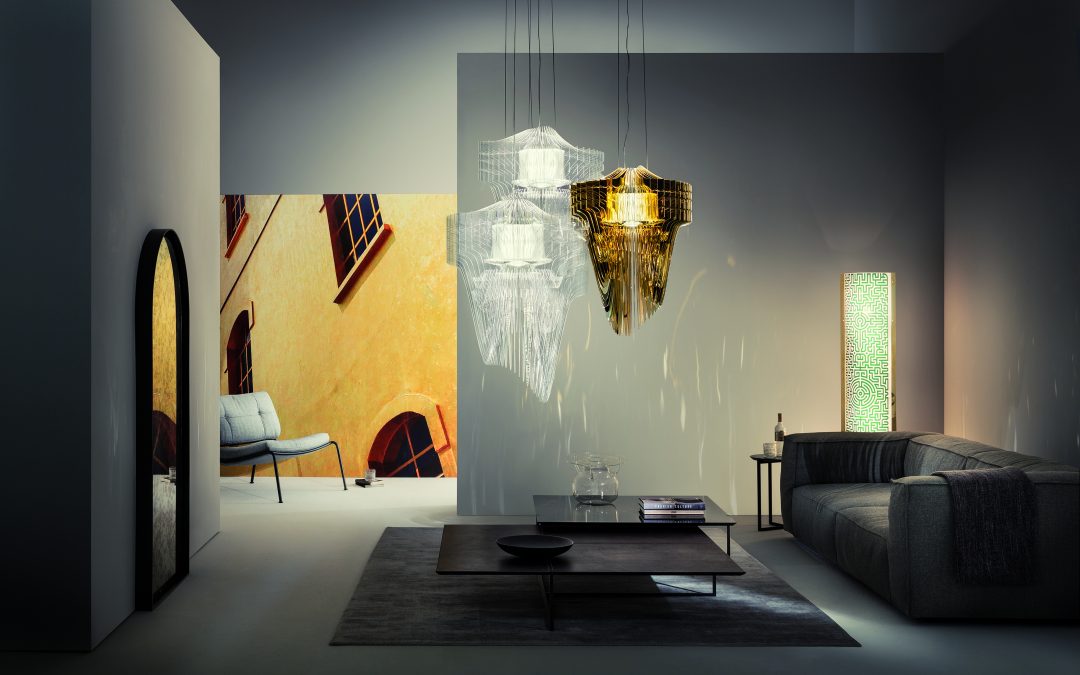 It all began on April 27, 2012, when architect Nigel Coates, Slamp’s Art Director, wrote colleague and schoolmate Zaha Hadid, inviting her to create a lamp for the company.

A few days later, Nigel found himself in Hadid’s London neighbourhood to discuss the offer in greater detail. He wrote in his diary: ‘It has a monastic atmosphere of quiet concentration. I’m shown into a boardroom where we are at least eight around the table, including Zaha’s partner Patrik Schumacher, her head of design Melodie, her contract advisor Maha, and Zaha herself. I think, OK, we’re getting serious.’ After showing them several catalogues to give them a taste of Slamp’s original, romantic soul, and explaining a bit about their approach to manufacturing, Hadid gives Coates her personal seal of approval. 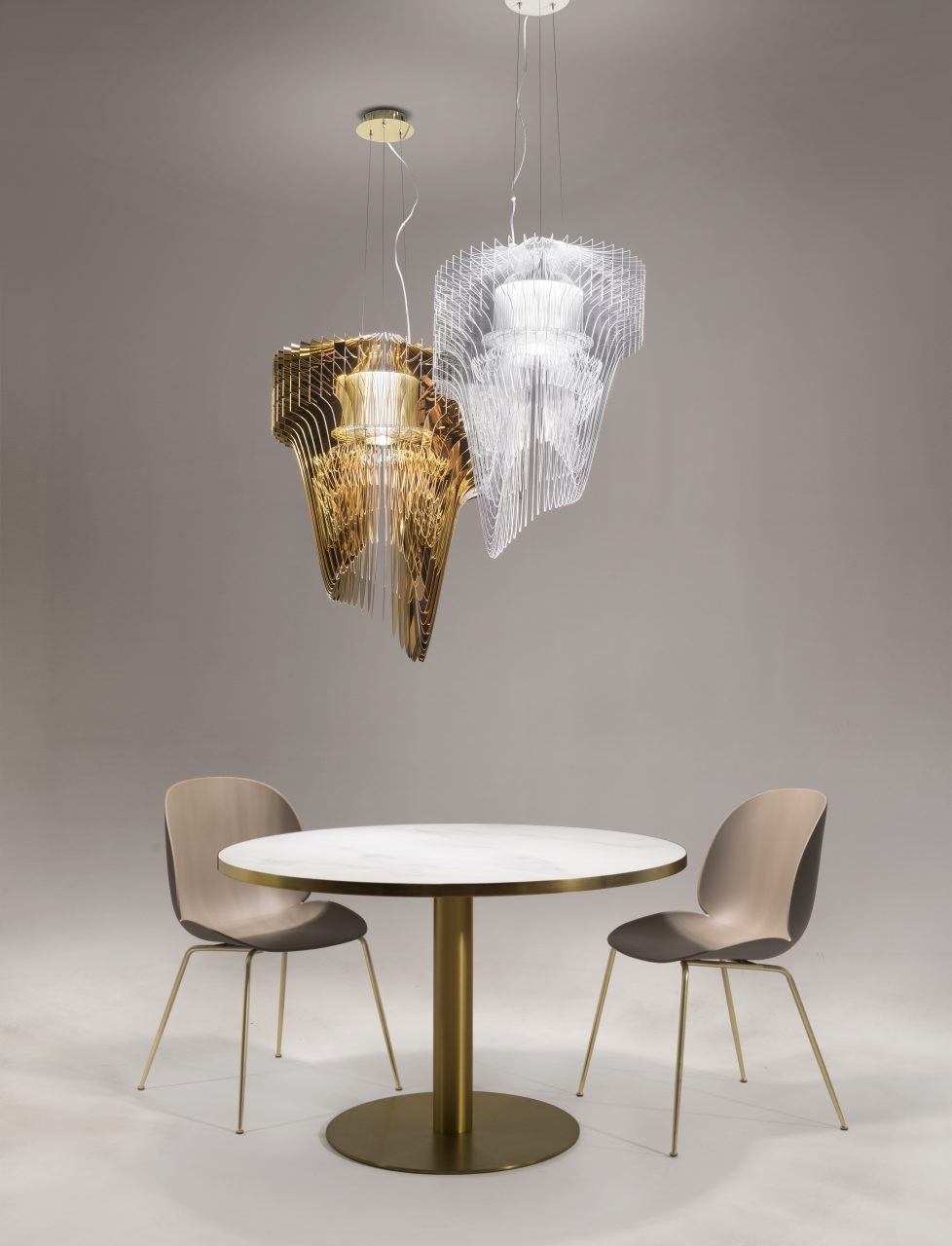 On May 22, 2012, a few days after their encounter, research and development begins. As with every collaboration with a designer, the first step was to send a kit of Slamp’s exclusive materials, as well as an assembled lamp to take apart. By doing so, it’s easy to understand how unique these technopolymers really are; resistant and ductile, passing from a thin, ‘flat’ sheet to an opulent, dramatic, and inimitable lamp.

The wait is excruciating, and a day doesn’t go by that Slamp’s CEO doesn’t ask Mr. Coates, ‘has anything come back?’, referring to sketches, proposals, designs.

Finally, on June 15, 2012, an email arrives from ZHD head of Designs Melodie Lueng, the Project Manager for the Slamp collaboration. Melodie sends sketches of a glowing sculpture with radial, almost palaeolithic arms surrounding the light source.

That’s when the back and forth between Rome and London begins: Zaha Hadid’s team works on perfecting the shape and giving the lamp a revolutionary, avant-garde soul, while Slamp works on developing the engineering and illumination aspects. 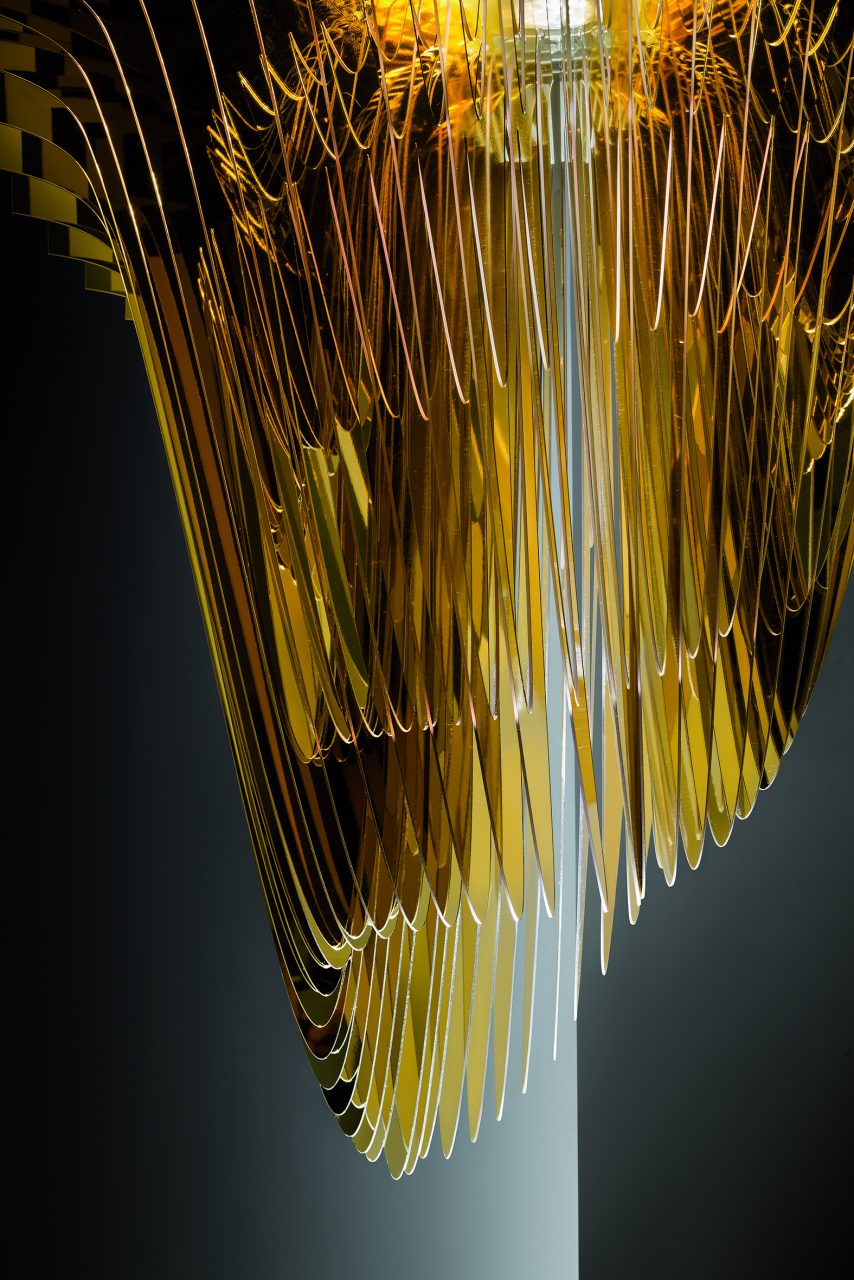 Only four days later, Melodie visits Slamp’s hub in Rome, Italy. After touring the showroom and production area, she moves to the Creative Department to see some the initial controlled-number cuts in prototyping. They work on different shapes over the next month.

Halfway through July, Melodie and Coates meet in London again, in the Art Director’s South Kensington’s studio. She works with scissors in hand, cutting, moving around, and stepping back to examine with a critical eye until she transforms a prototype into a satisfying shape.Meanwhile, the team in Rome continues their research and within 10 or so days, finds the best technical method to produce the lamp.

On October 23, another email arrives from Zaha with an elongated version of the previous design, asking to replace it. Slamp’s CEO Roberto Ziliani, someone who loves a challenge, has a stroke of genius: ‘Why not make both?’

They hang the two options in her Goswell Road studio, both the wider version, and the elongated version. Zaha Hadid and her partner Patrik Schumaker show up with others, and the tension was palpable. 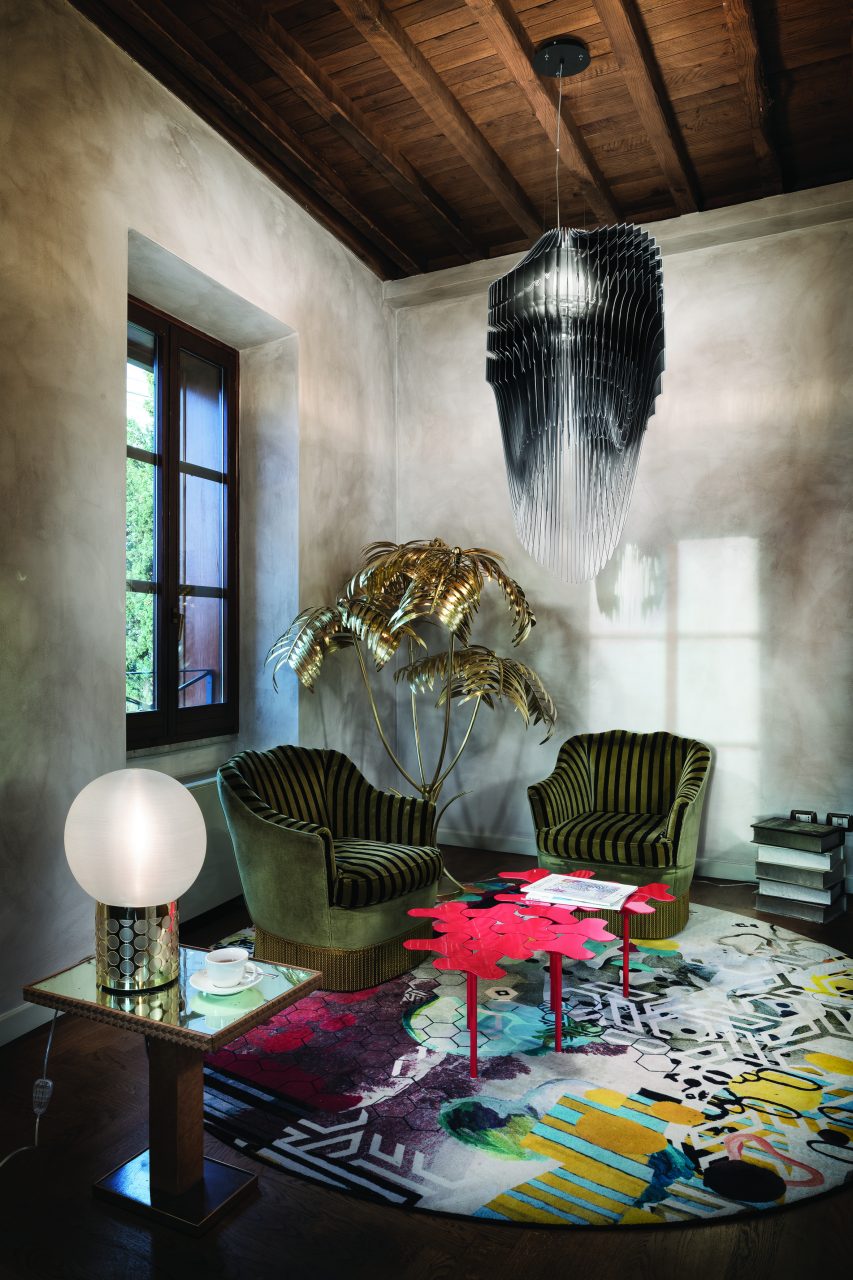 Luca and Nigel explain the engineering and illumination techniques, aspects Studio Hadid fully entrusted to Slamp’s know-how. The products have something magic about them, and the light gives them extraordinary energy. They generate a sophisticated atmosphere while casting the right glow, even over tabletop surfaces Zaha is especially fascinated by the wider version, with black shaded edges. 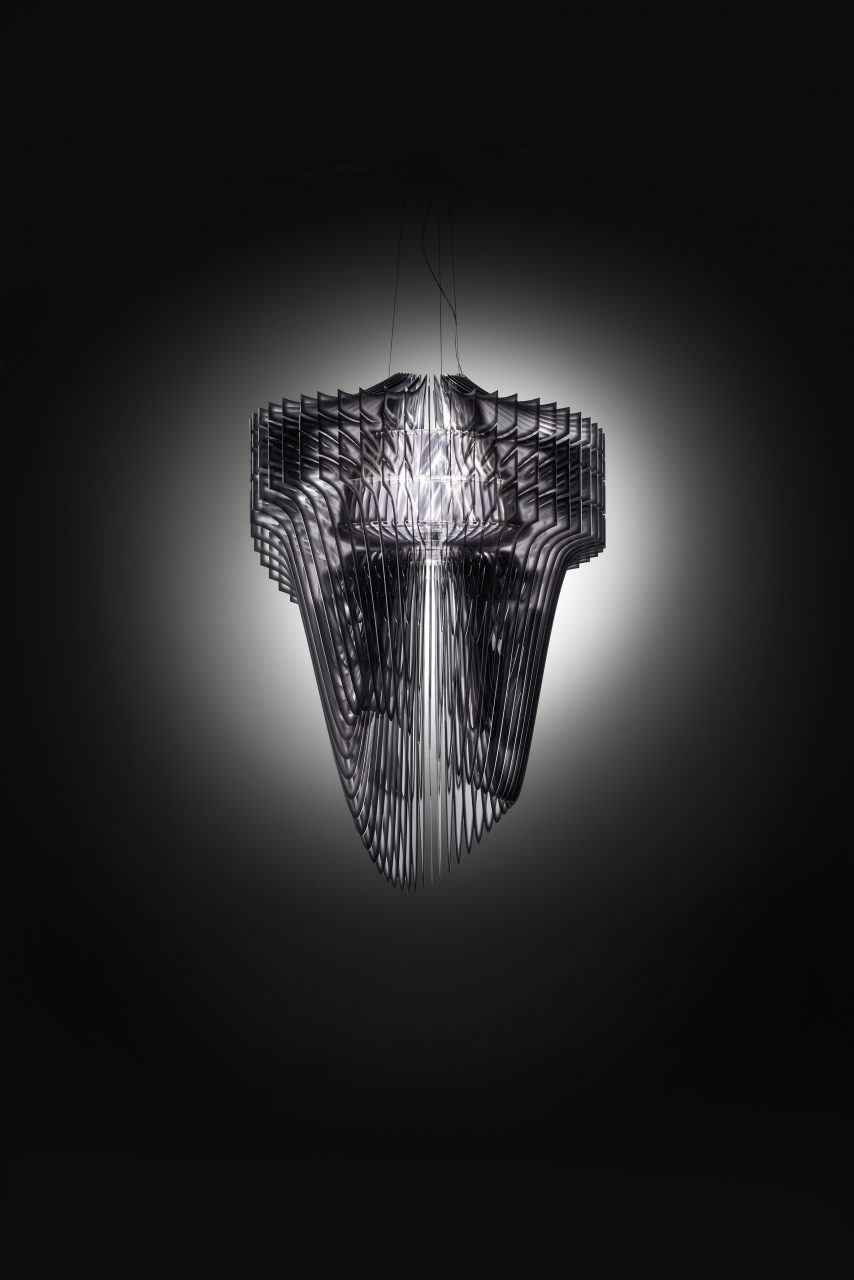 We can say that on November 17, 2012, in London’s Goswell Road studio, Aria and Avia come to life. Between the end of February and the beginning of March, a month before the official launch during Milan’s 2013 Euroluce, four prototypes to be seen by the public are approved.

Avia comes in four sizes, both in all white and all black, and Aria in one size, in transparent polycarbonate with printed, shaded black borders. When asked to comment on the final product, Zaha says, ‘Sweeping motion lifts and turns both Avia and Aria. Like billowing clouds, light ripples across their blurred interplay of solid and void, evolving, compressing and contracting from every angle.’ 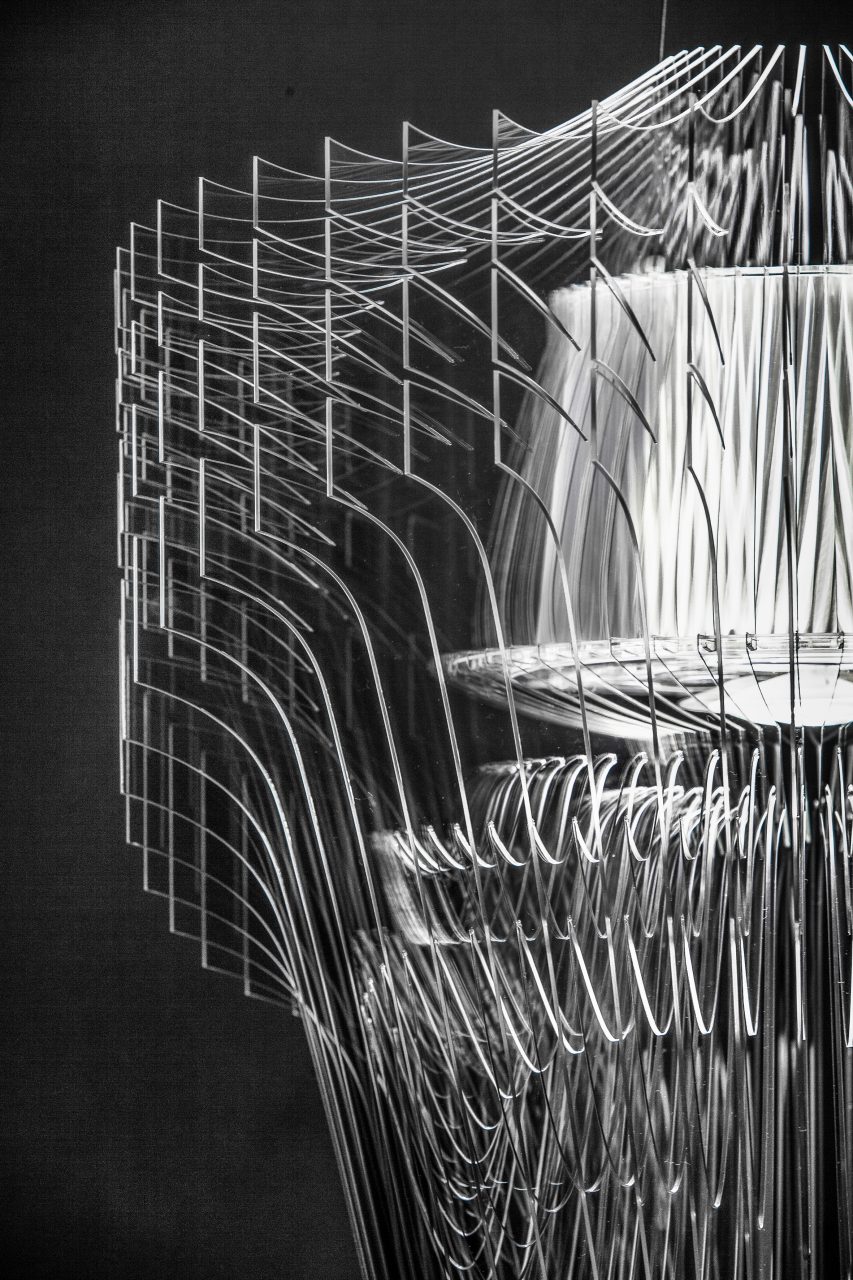 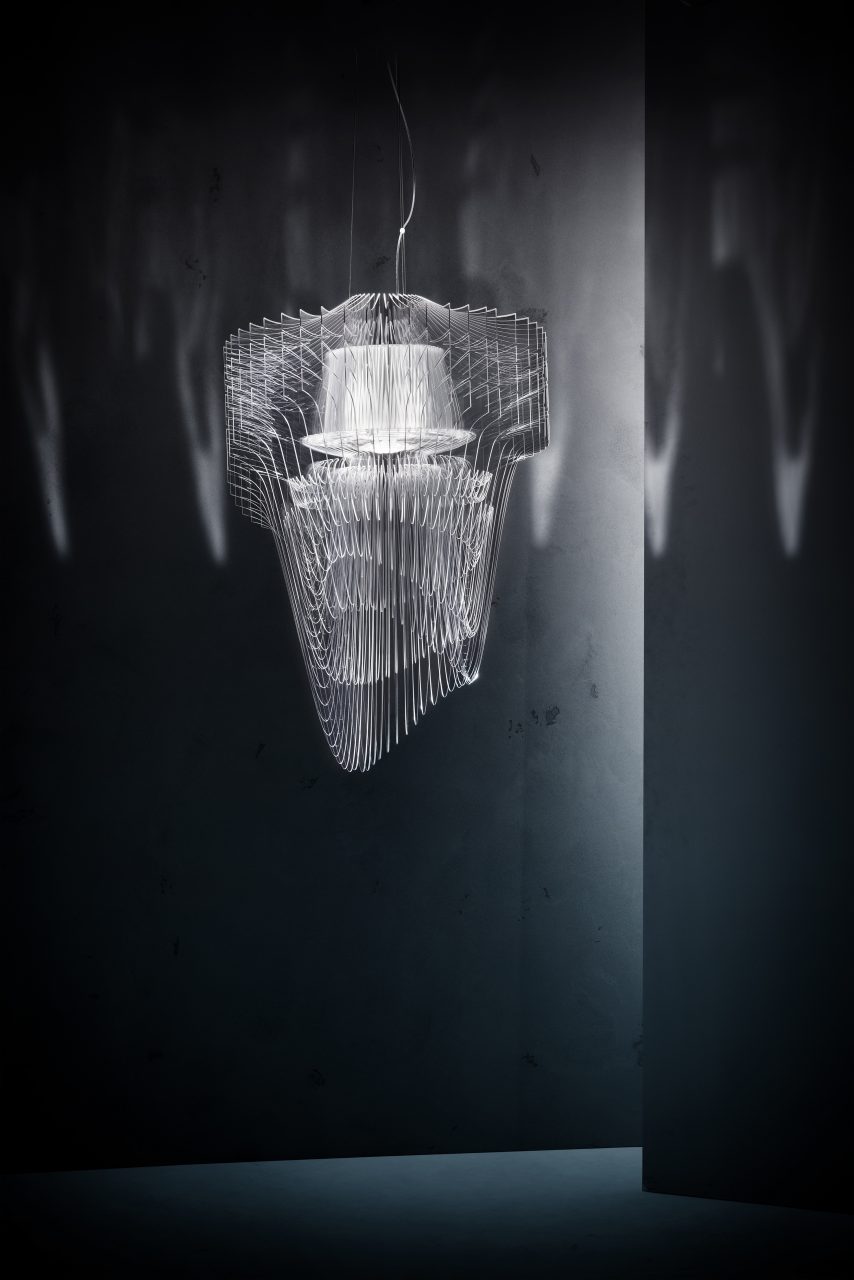 On April 11, 2013, right in the middle of Milan’s Euroluce, Nigel receives a call from Melodie to let him know that Zaha may visit the stand herself. The stand is buzzing with designer interviews, clients interested in the newest collections, journalists taking photos to publish them later in their blogs – but no hint of Zaha.

The closer it gets to closing time, the more hope permeated for her visit. The Slamp team, disappointed, confesses the day after that they were sure something had come up. Instead, she shows up minutes before the stand closes, in a black coat and her sunglasses holding back her hair from her face.

With every step she takes, the crowd separates, and everyone asks themselves if it’s actually her. Some take photographs. It’s not everyday that one is a metre away from Zaha Hadid.

Imposing, yet delicate and open, smiling for an extra moment at anyone who catches her eye.

Everyone from Slamp welcomes her. Luca Mazza shows her the space, bringing her to the centre where her creations, Aria and Avia are on display. She sits on a sofa and silently observes alongside her closest friend and longtime collaborator, Camiran Rasool, owner of the marble company Citco.

In 2015 the collection expands with Aria Transparent, available in three sizes and fitted with an integrated LED source. It’s presented in the 2015 Euroluce stand by Patrik Schumaker himself. 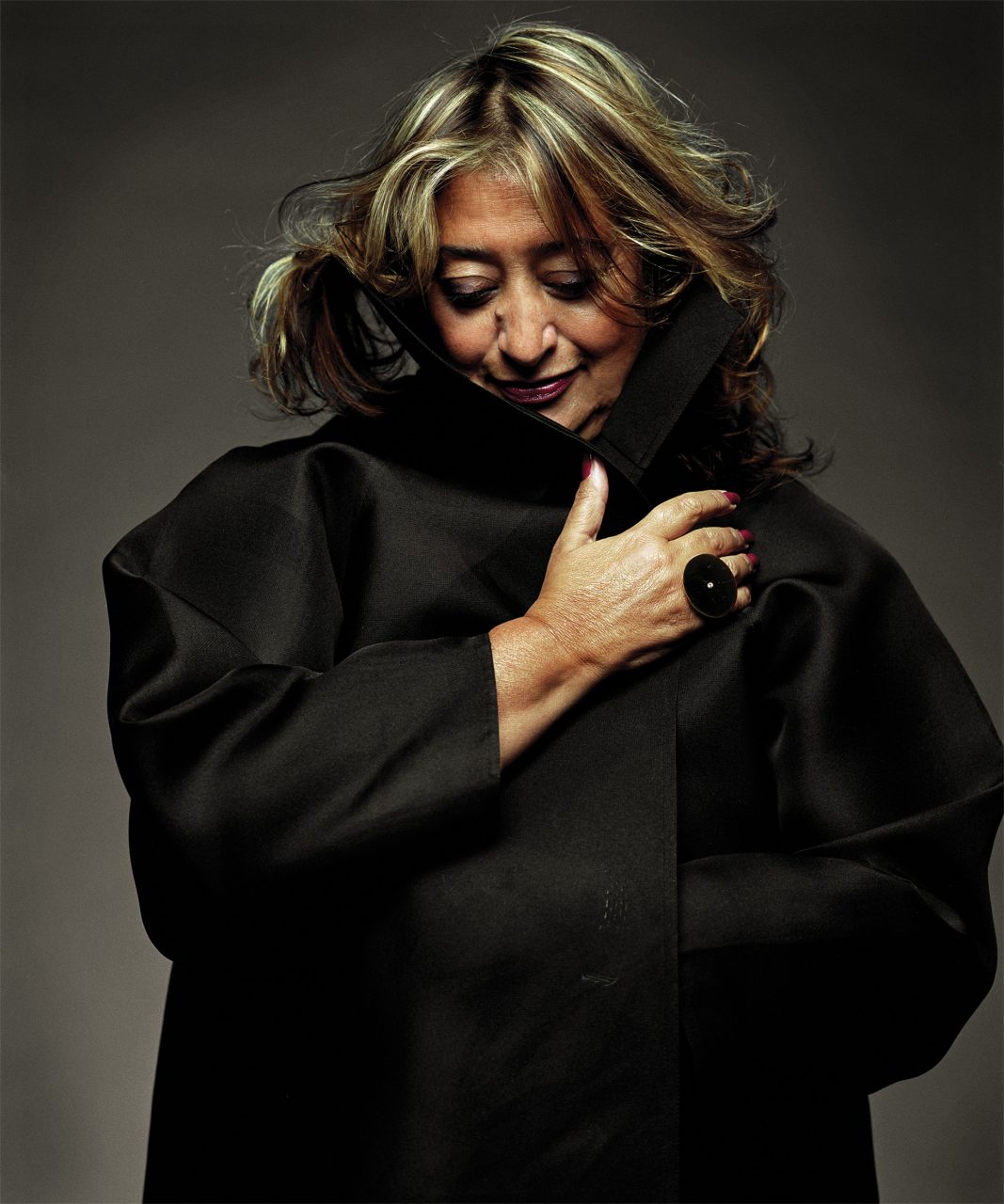 The creative affinity between Slamp and Studio Hadid, the extraordinary people like Melodie Leung, Maha Kutay, and Woody Yao, the constant respect and kindness throughout every step of the design process – allow for a continuing relationship, richly evolving to the point of moving beyond simply that of professional to esteemed, personal.

In March 2020, the Avia collection evolves with black and white versions that fade from top to bottom, replacing the current versions in the catalogue. The fades are offset 5mm from the borders, that when illuminated, trace the same ‘irregular, almost palaeolithic arms’ that Zaha designed in 2012. A tribute to her genius, her visionary, glowing architecture, on a smaller scale. As an emotional Maha Kutay noted in speech after wining the DesignEuropa prize: ‘it may simply seem like a lamp, but Zaha’s DNA is inside it.’