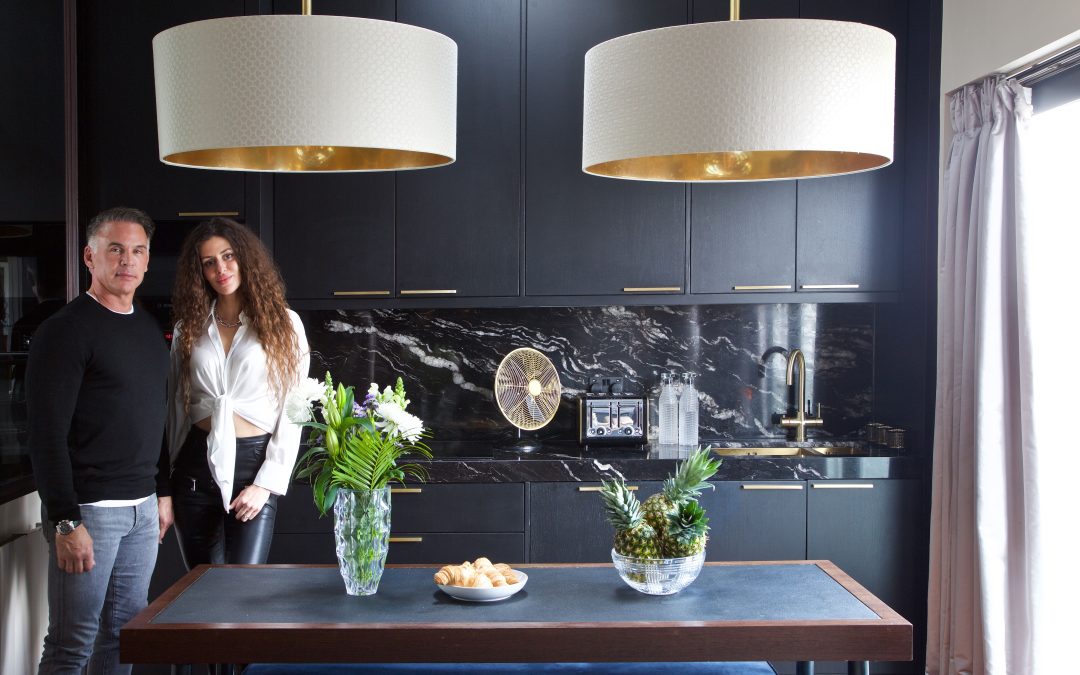 Two penthouse apartments were built on an existing site at the highest point of this London suburb, allowing for an impressive view across the city. The carefully tailored units were joined to become one and the project was recently completed by interior designer Sean Cochrane. 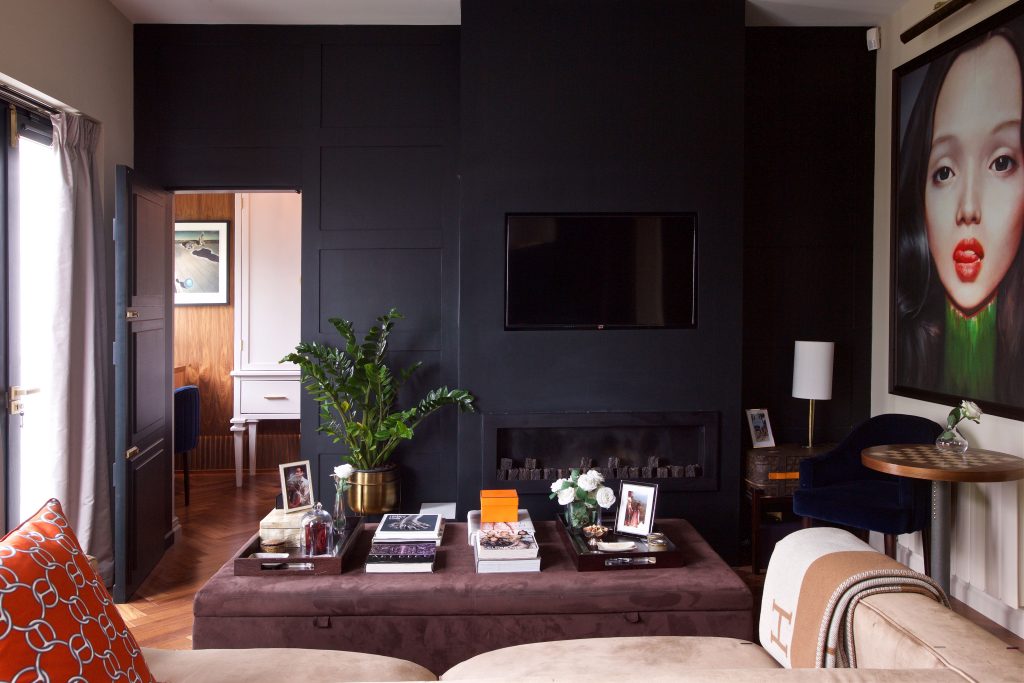 The designer’s brief was to produce timeless, comfortable spaces within the available 70 square metres. The concept of comfortable has consistently translated as luxurious across almost all projects in Cochrane’s studio portfolio. The signature expression of luxury in this project is, however, struck with an edge of cool and the wow factor impression grabs guests from the get-go at the entrance. Brief prerequisites included a predominant presence of warm elements to induce a sensation of comfort in which to unwind and recharge, whilst contrasting with a balanced measure of more energising, progressive fixture examples and a contemporary interior configuration. 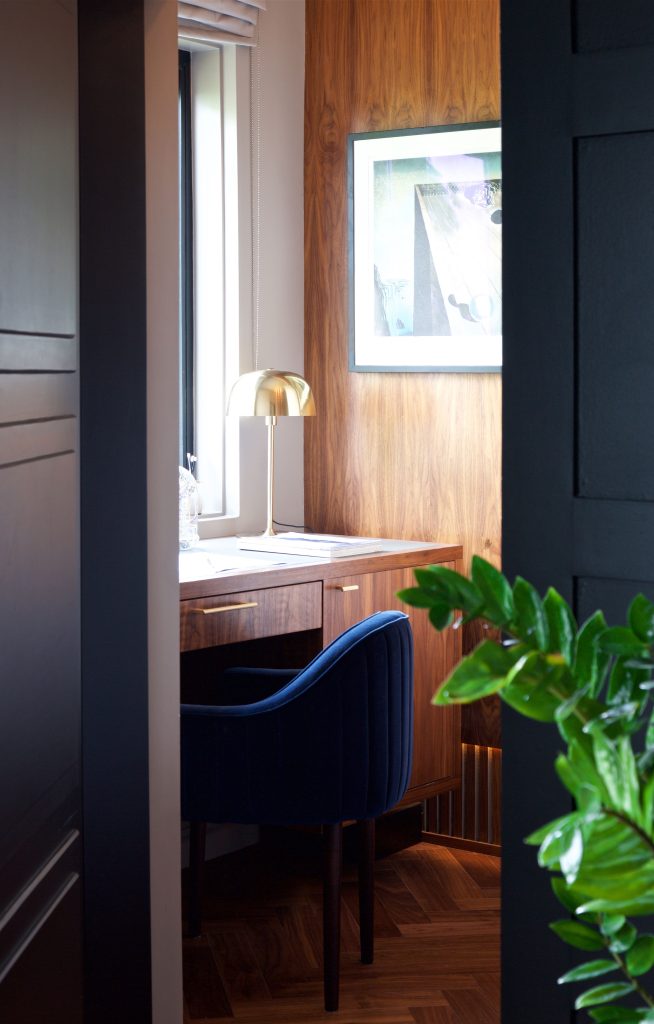 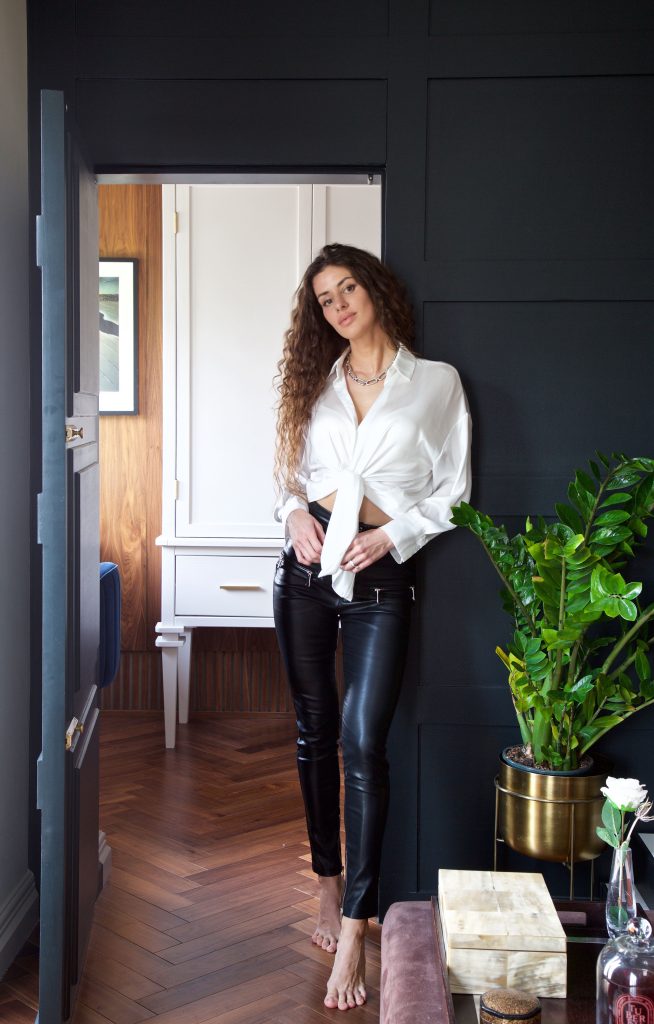 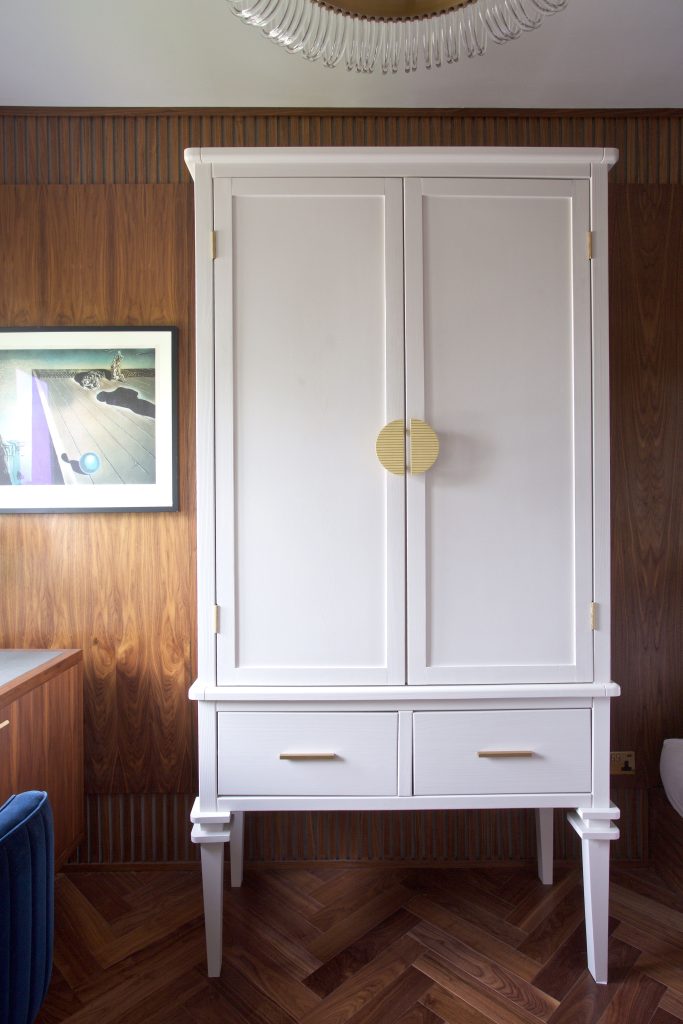 The interiors of several favourite and finest nightspots and private clubs in London were used as references. Specific materials and fabrics here represent their design and décor. The available space in such a compact project dictates that every centimetre within the various rooms be meticulously considered, meaning that virtually all the items in this penthouse are bespoke and form follows function. 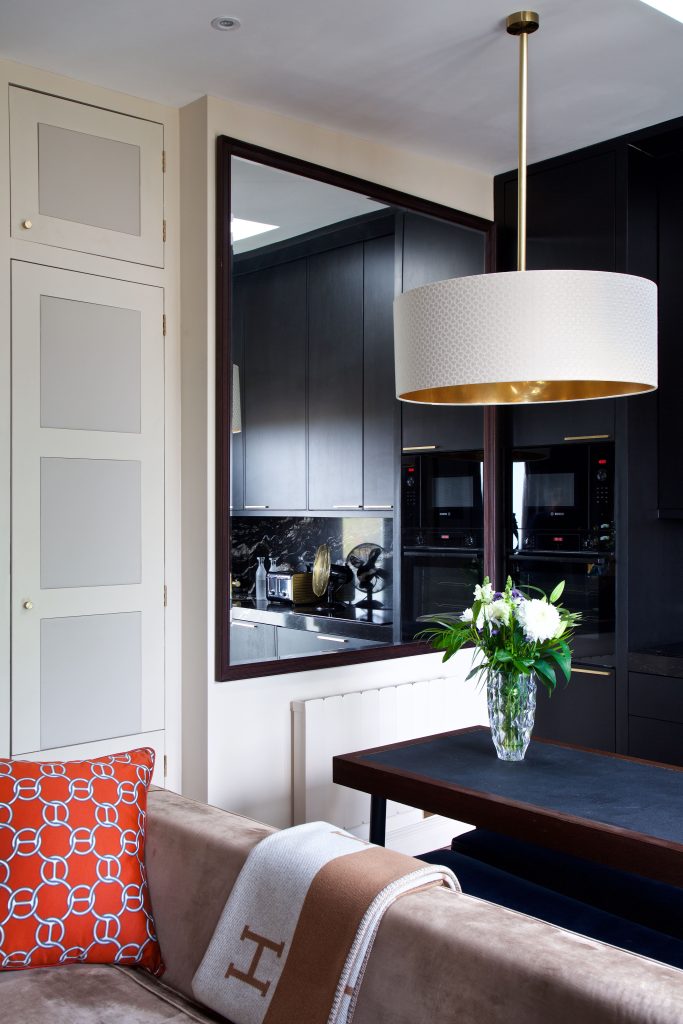 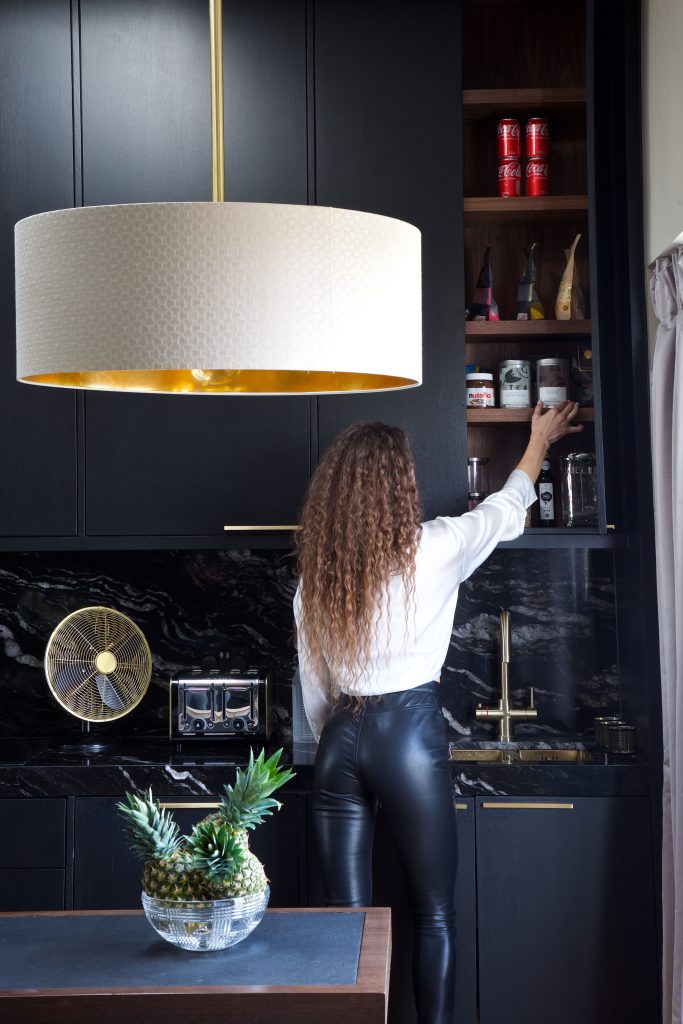 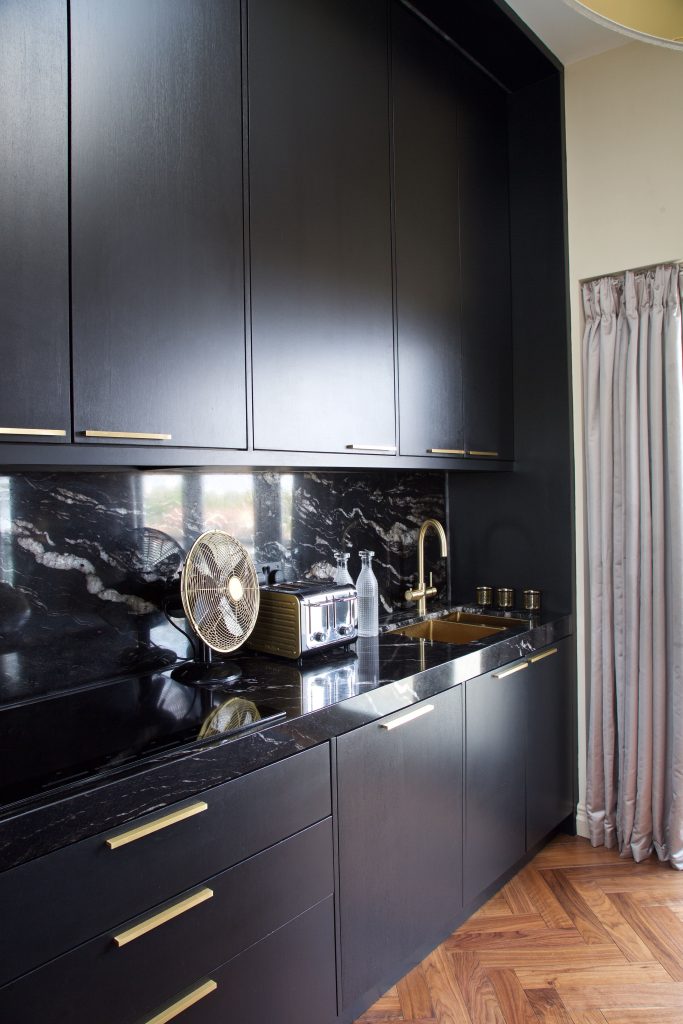 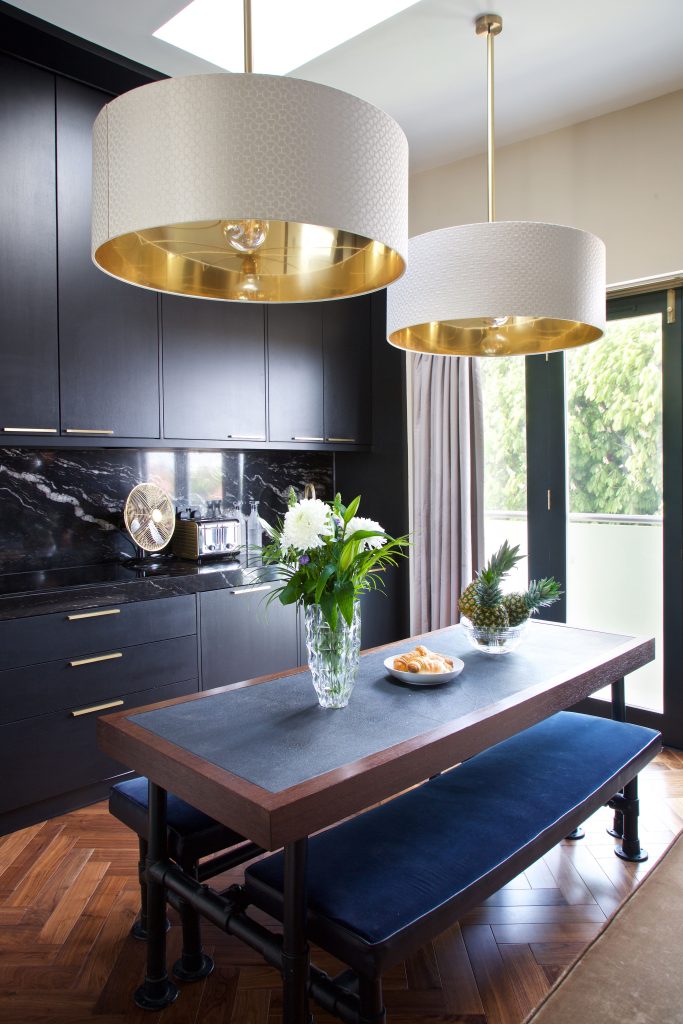 On a professional level, clients are involved in the creative world: one as a designer and the other as a fashion model. The couple have a young daughter and the apartment has two bedrooms, two bathrooms and an office space to provide a work-from-home solution. It also has secure off-street parking. 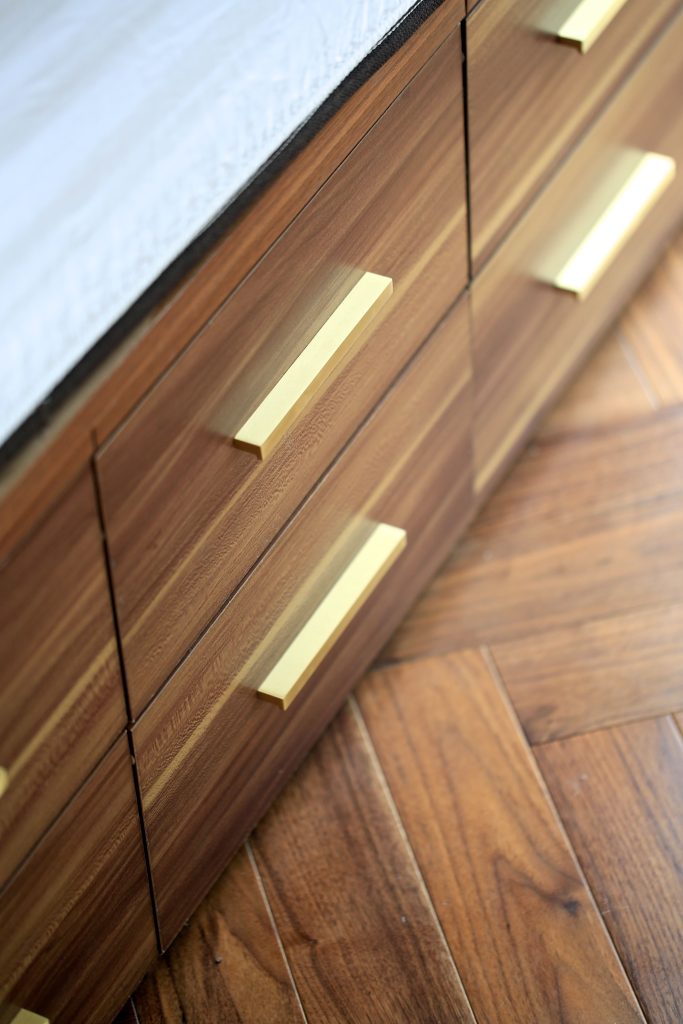 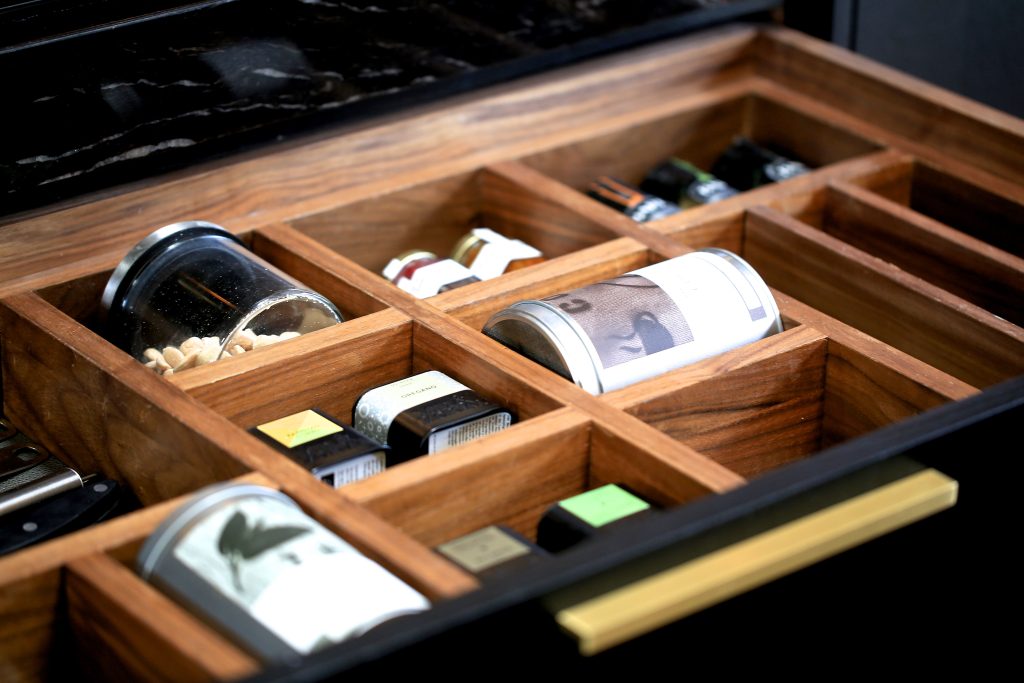 Notable is the artwork, largely comprising of family shoots, which makes sense as the client is a successful fashion model. Tim walker photography and his expertise has successfully added to the overall cool, edgy signature. Storage and wardrobe-wise, the bottom half of the cabinetry encompasses custom-made walnut drawers, each of which is individually separated to accommodate the clients’ wardrobes.

Structural additions include a new chimney that was installed to conceal the television and to introduce a useable fireplace. After the necessary built areas were altered and completed, the decoration and interior design of the apartment took five months to complete. 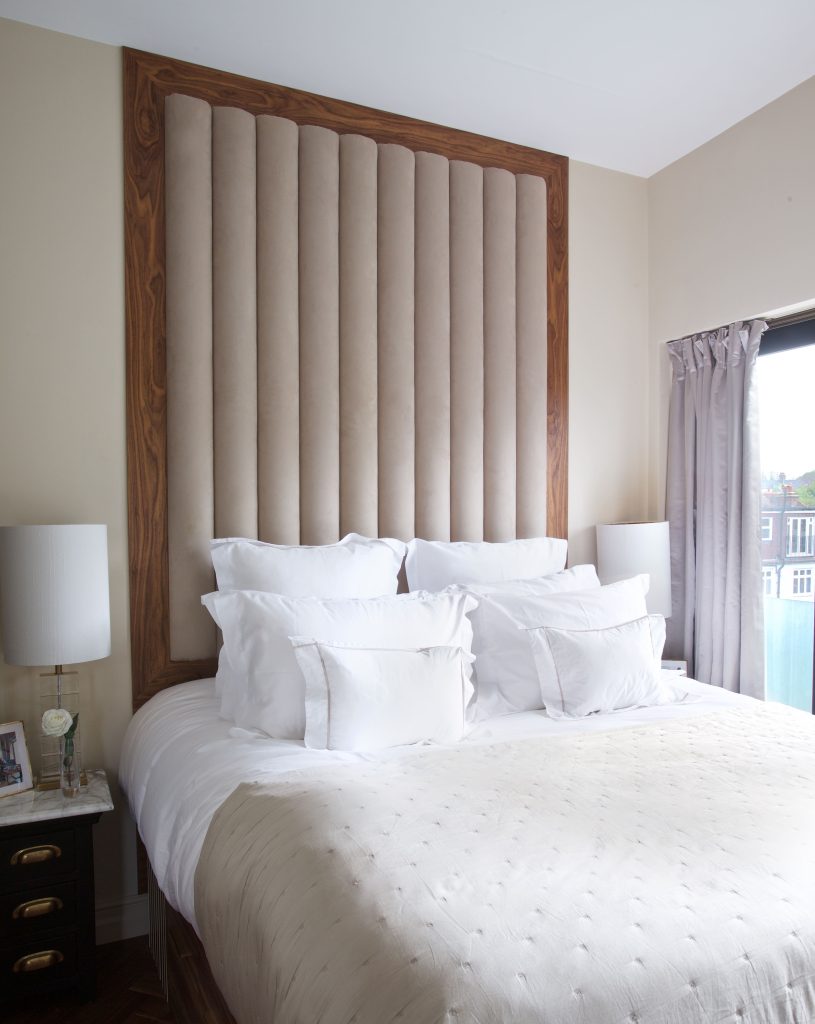 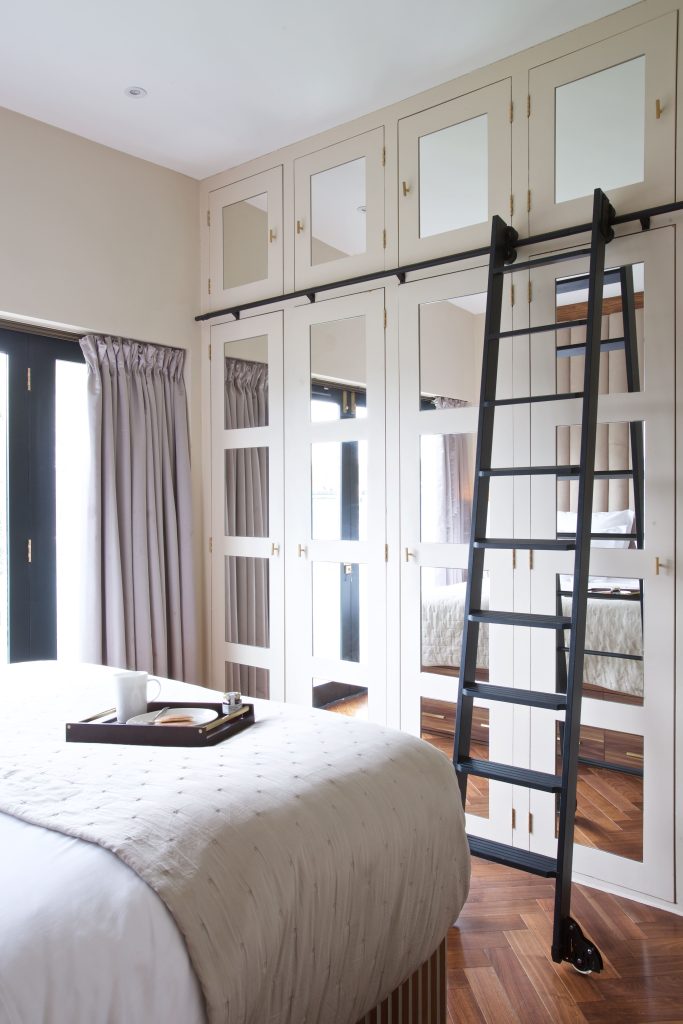 Says Sean Cochrane: ‘We knew we needed to maximise the use of space. Detail was important as was the use of mirrors to take advantage of the movement of light and the volume, while also accentuating the height of the penthouse.

‘Architecturally, we were very fortunate to have ceiling and full-length window heights and the only real challenge was to make the most of the useable space, while still being able to deliver seamless movement throughout.

‘The resulting reflection of simplicity in this penthouse, which we find is the fundamental, go-to client goal in our more recent projects, totally satisfied this family.’ 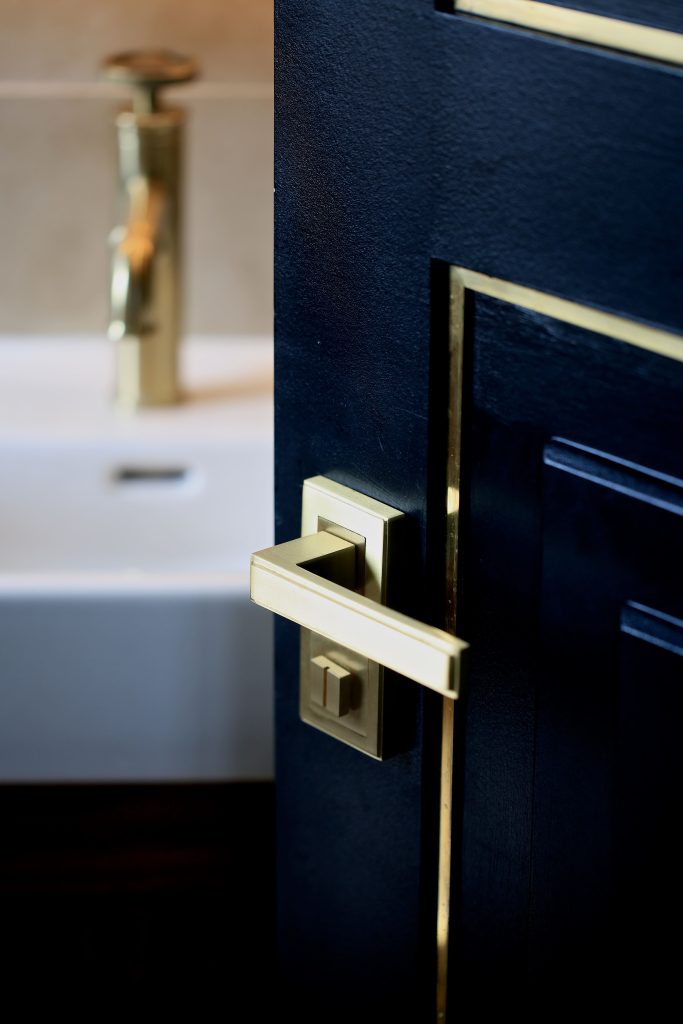 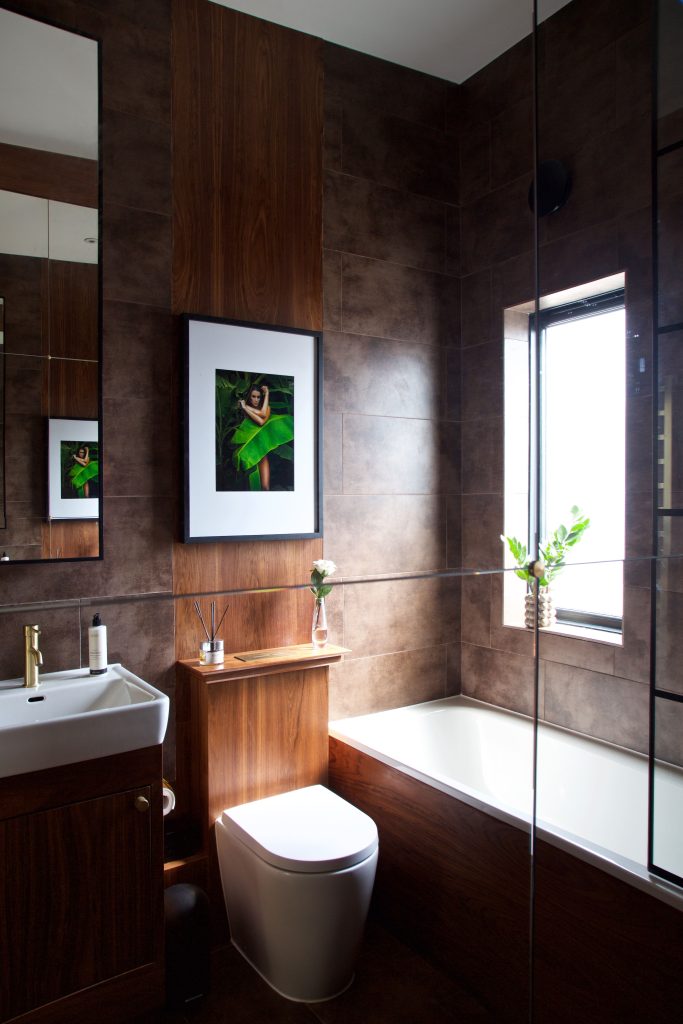 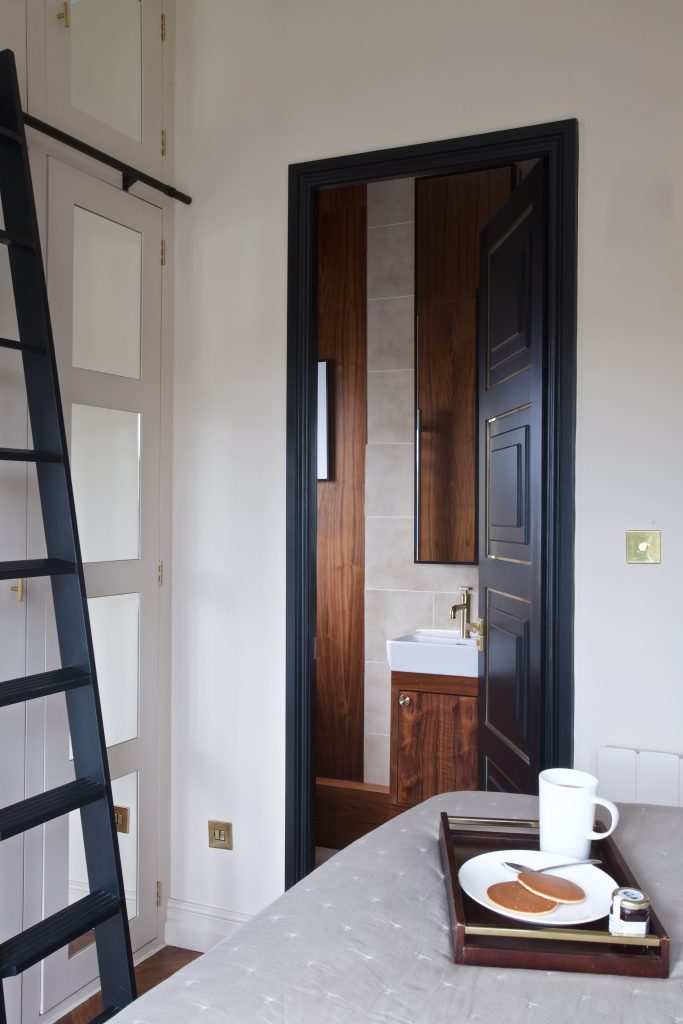 Founded in 2004, Cochrane Design provides a comprehensive design, architecture and development service for private clients, developers, hoteliers and investors throughout the UK and abroad. The practice specialises in exclusive high-end properties and CEO and Creative Director, Sean Cochrane and the dedicated team of talented designers, handle every carefully considered detail; from space planning to lighting, bespoke joinery and cabinetry, furniture and soft furnishings.

Cochrane Design projects are known for their innovative use of space and light and their modern, fresh approach to colour and texture. Sean’s work is infused with influences from his travels – bringing inspiration from South Africa, where he lived for two years, as well as from Asia. It is creative vision, attention to detail and exacting standards which are the driving force of the company. 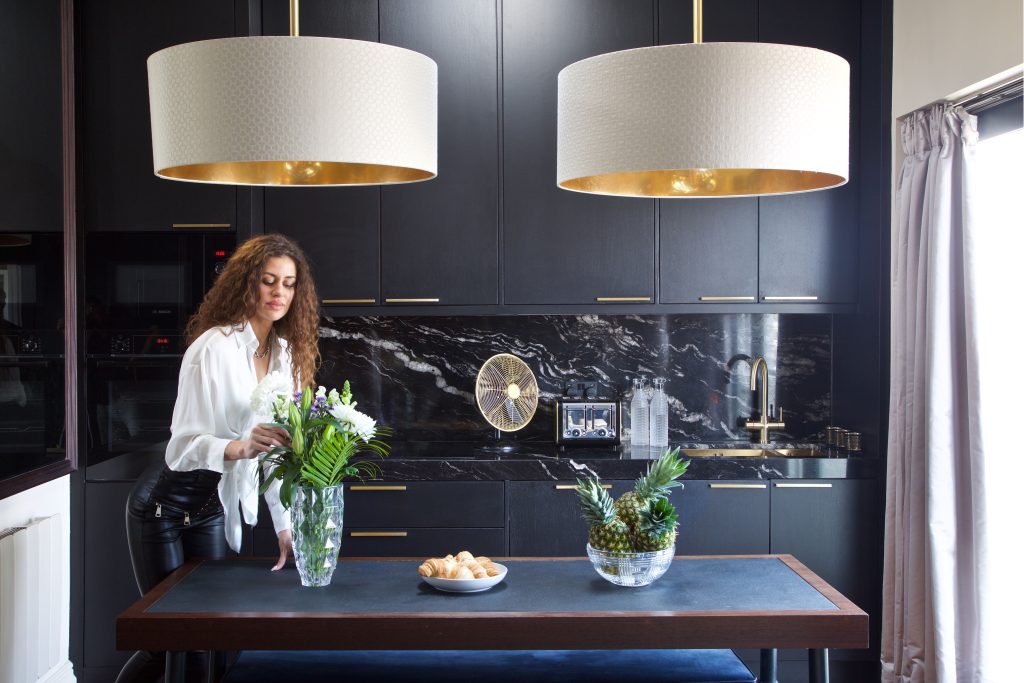