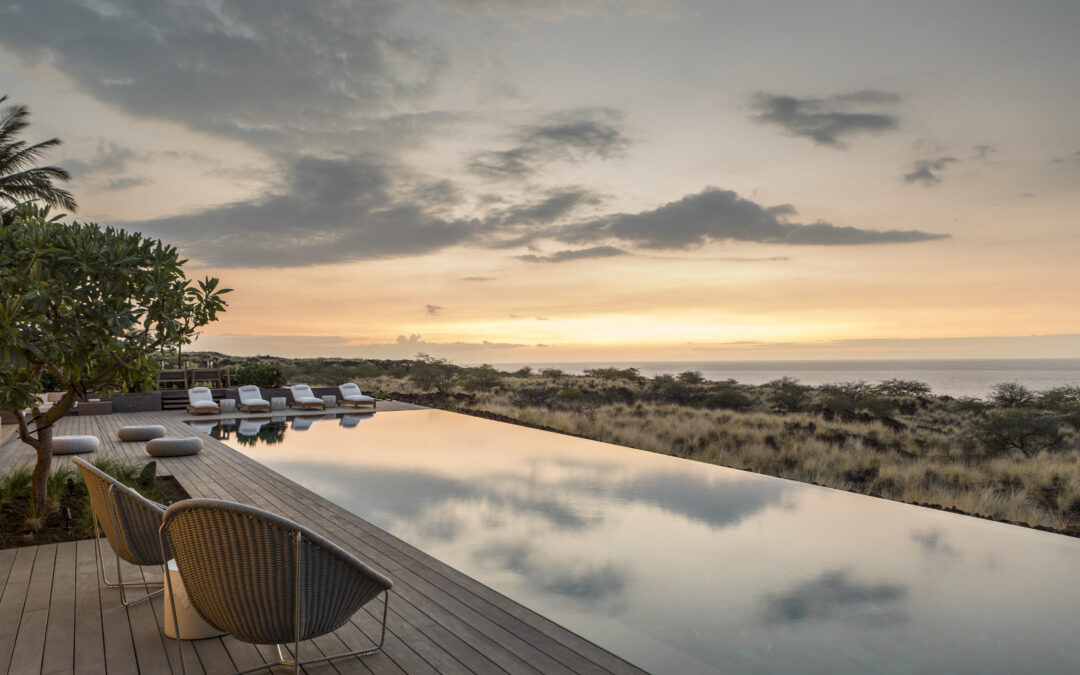 Situated along a rugged stretch of coastline, this getaway family retreat embraces the spirit of Mauka-Makai – the symbolic flow of lava from mountain to sea. This site in Manini’owali Beach, loosely referred to by islanders as Kua Bay in Kona, captures the stark contrasts between land and sea in the Hawaiian topography. The house is embedded into the lava field to create a private retreat with direct connections to the volcanic landscape and dramatic vistas of the Pacific Ocean, while simultaneously minimising its exposure upon the landscape. 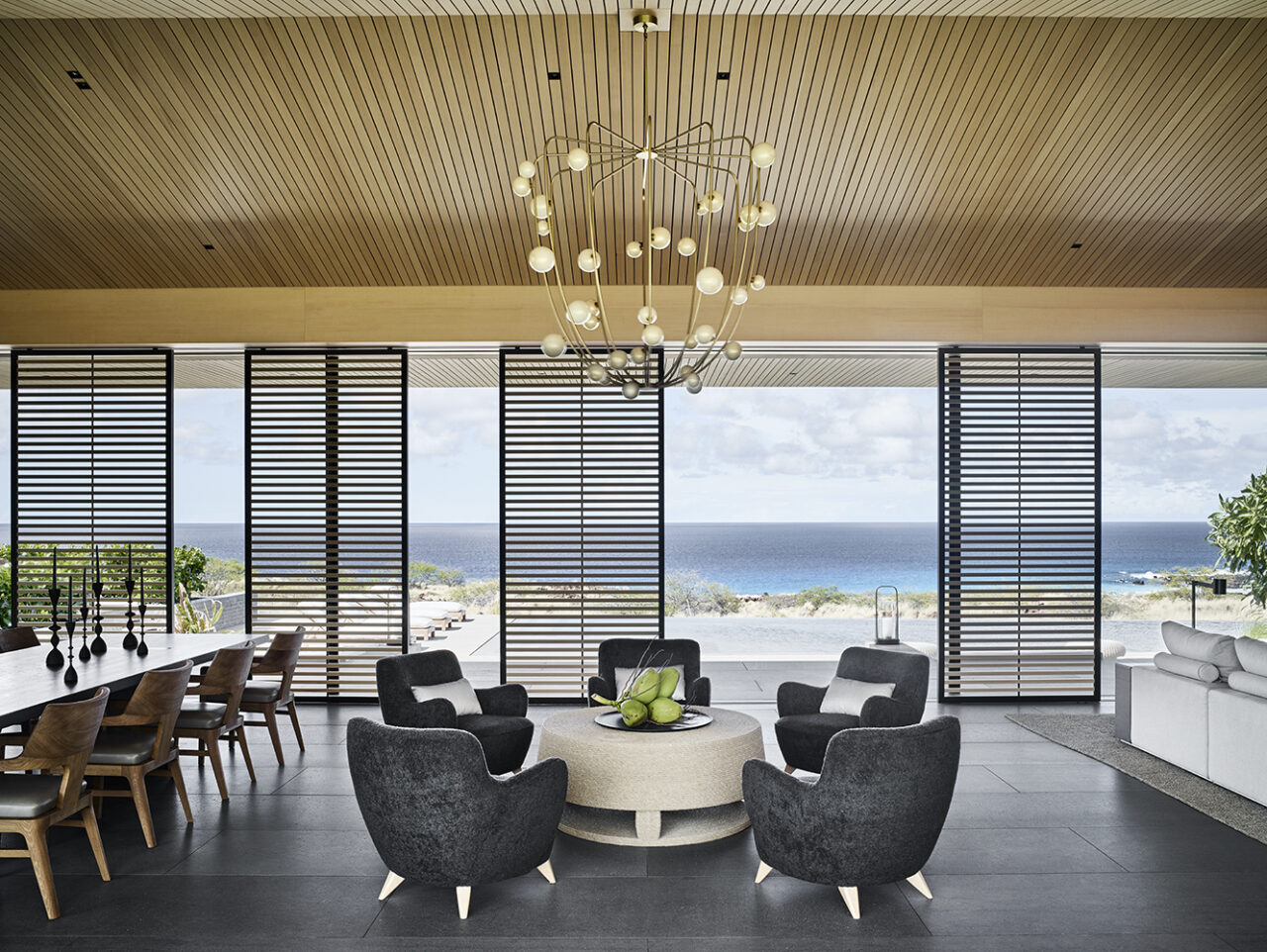 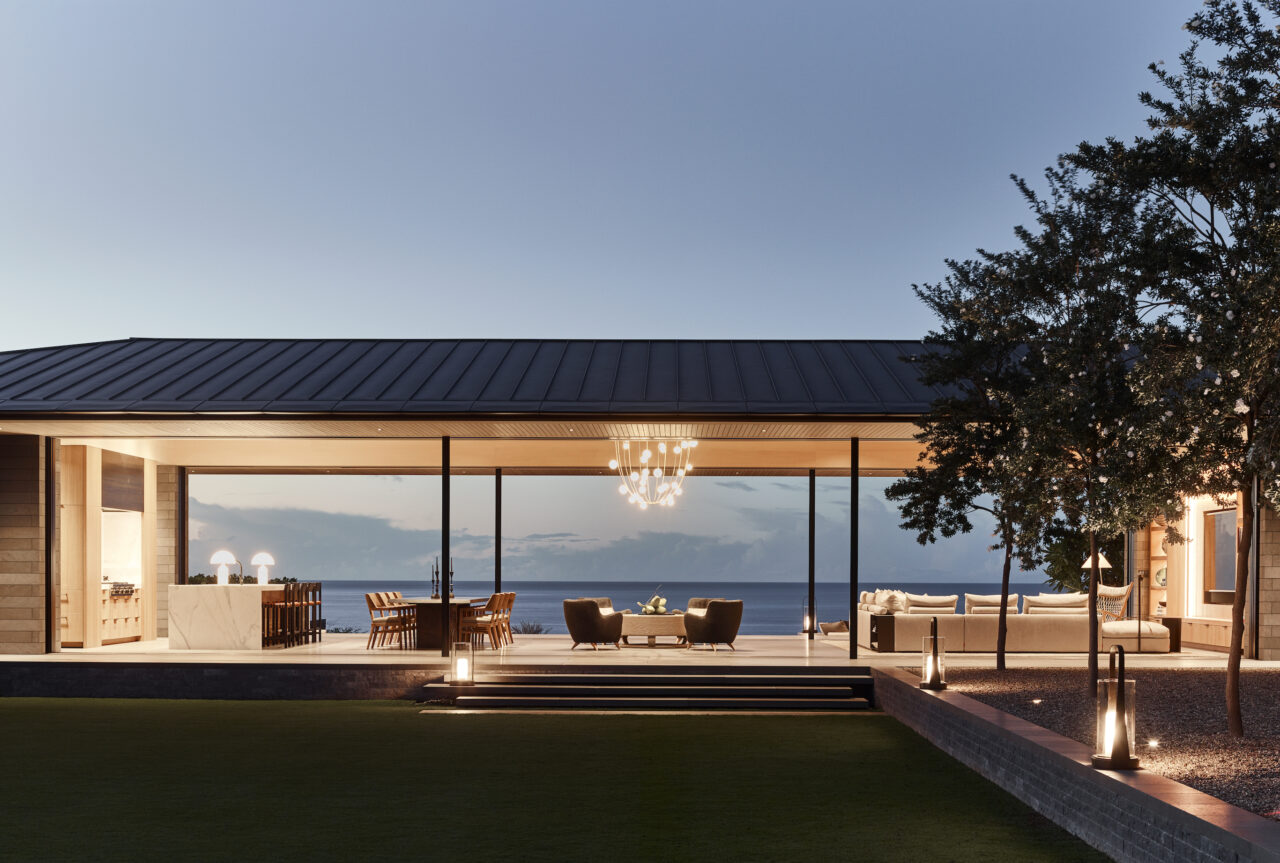 Decorative corten steel panels screen the autocourt from the rest of the property and direct guests toward the courtyard and ocean views beyond. This entry sequence provides a transitional experience from the sunken autocourt surrounded by lava, stepping up on axis to the elevated courtyard and dramatic reveal of the oceanic panorama at the main hale (in the Hawaiian language, hale (pronounced hah-leh) means house or building, augmenting the sensation of vast openness that initially drew the clients to the site. 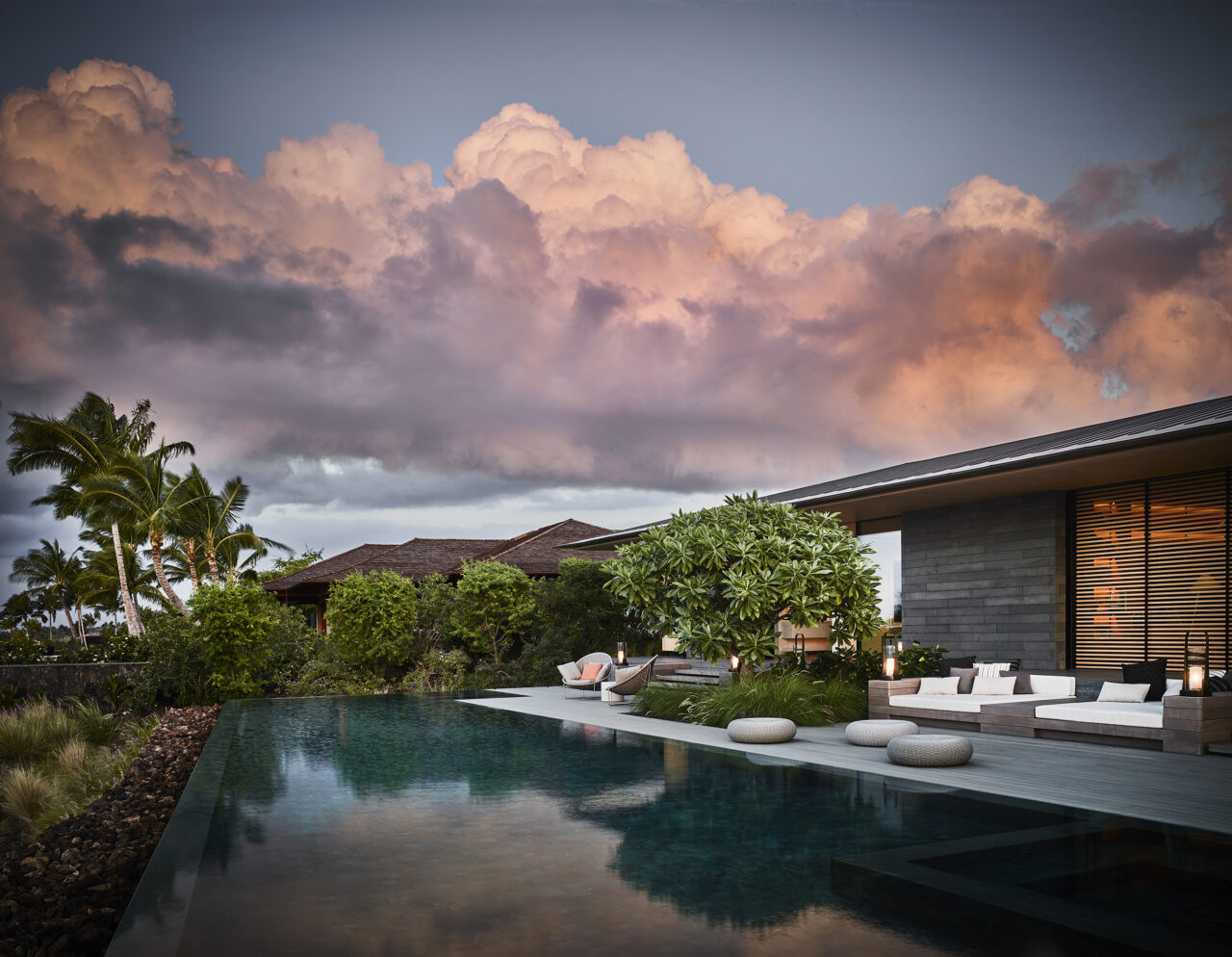 The sunny Kailua-Kona District stretches almost two-thirds of the entire west side of the island of Hawaii. Along this expansive area, you’ll find everything from coffee farms to historic Hawaiian landmarks. King Kamehameha actually spent his final years in Kailua-Kona. Shielded from winds by Maunaloa, south Kona’s calm and clear waters are perfect for snorkeling, diving, sailing and spotting dolphins and honu (Hawaiian green sea turtles). 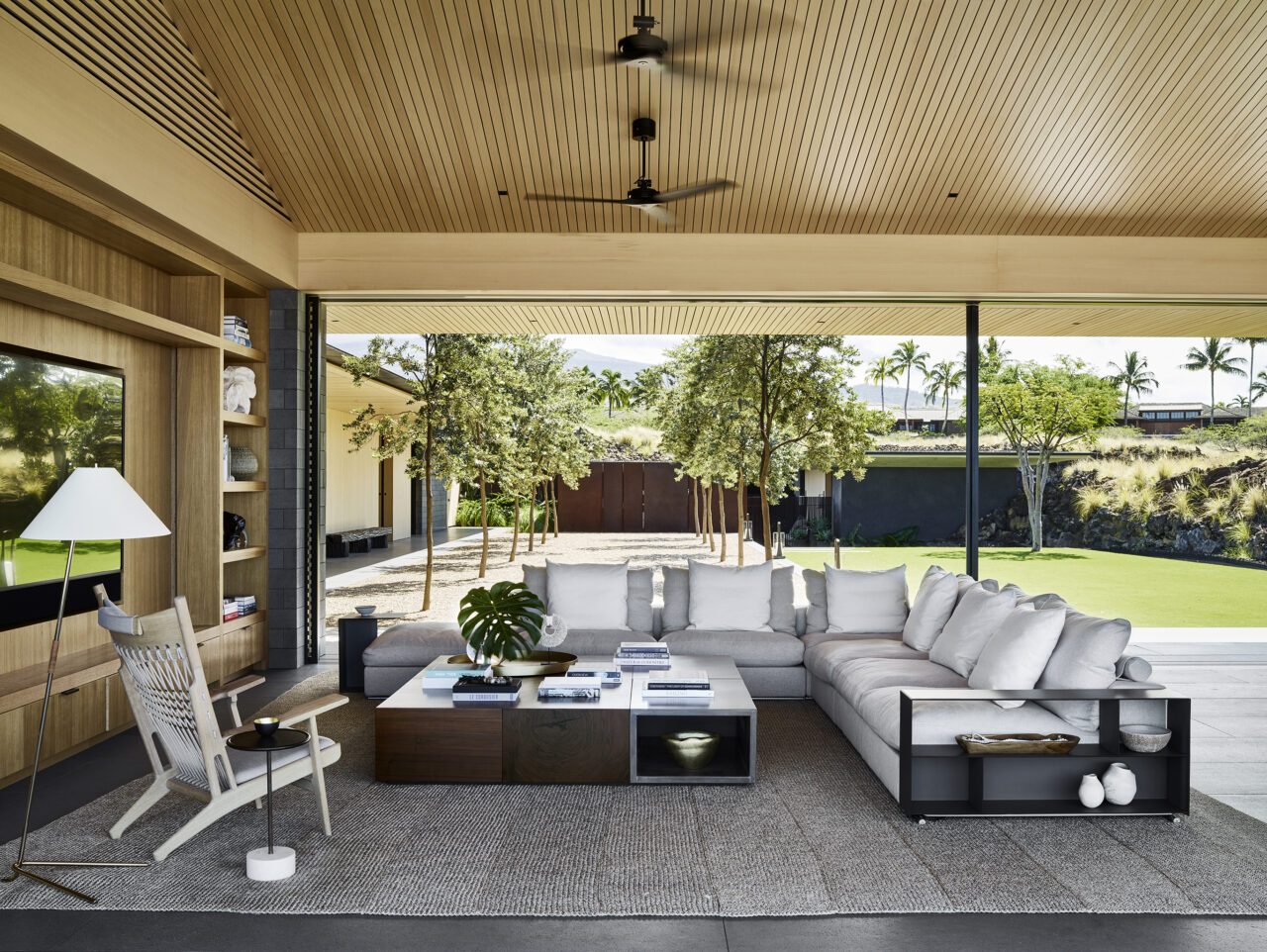 The main hale seamlessly frames the ocean views with expansive floor-to-ceiling pocketing glass doors. A separate system of pocketing wood screens is designed to soften the sunlight without compromising the views. Materials – including basalt, Alaska Yellow Cedar and steel – are simple, tailored and unadorned, and used for both interior and exterior surfaces. Furnishings are casual, favouring lightly-coloured sofas and chairs that act as a counterpoint to the dark lava and basalt. An ocean facing lanai descends to an infinity-edge pool with intimate outdoor gathering spaces. 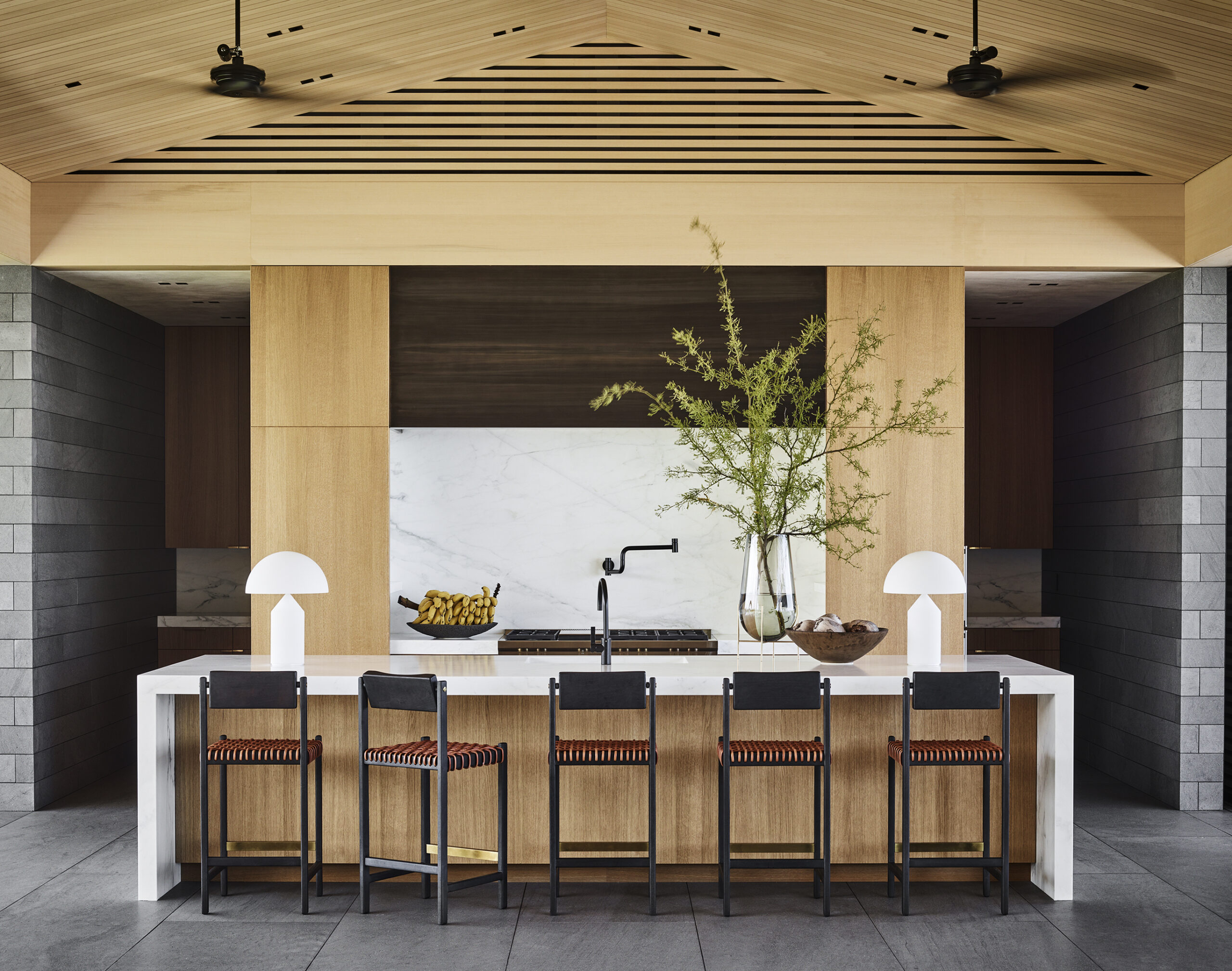 On the mountain side of the property, dark lava formations create a dramatic backdrop. On the ocean side, the immediate adjacency to the turquoise oceanfront makes you feel as if you’re standing on the edge of the earth. The challenge was to manipulate the site so that the buildings would blend with the landscape, while providing a graceful and multilayered experience from mountain to sea.

The private driveway on the mountain side of the property cuts into existing 4,5-metre high lava rock formations, shielding the property from surrounding neighbours and reducing its visual impact from the roadway. Descending into the autocourt, the garage and guest hale structures are embedded into the natural lava topography. The living roof, renaturalised with lava rock and native grasses further emphasises the building’s direct relationship with the site. 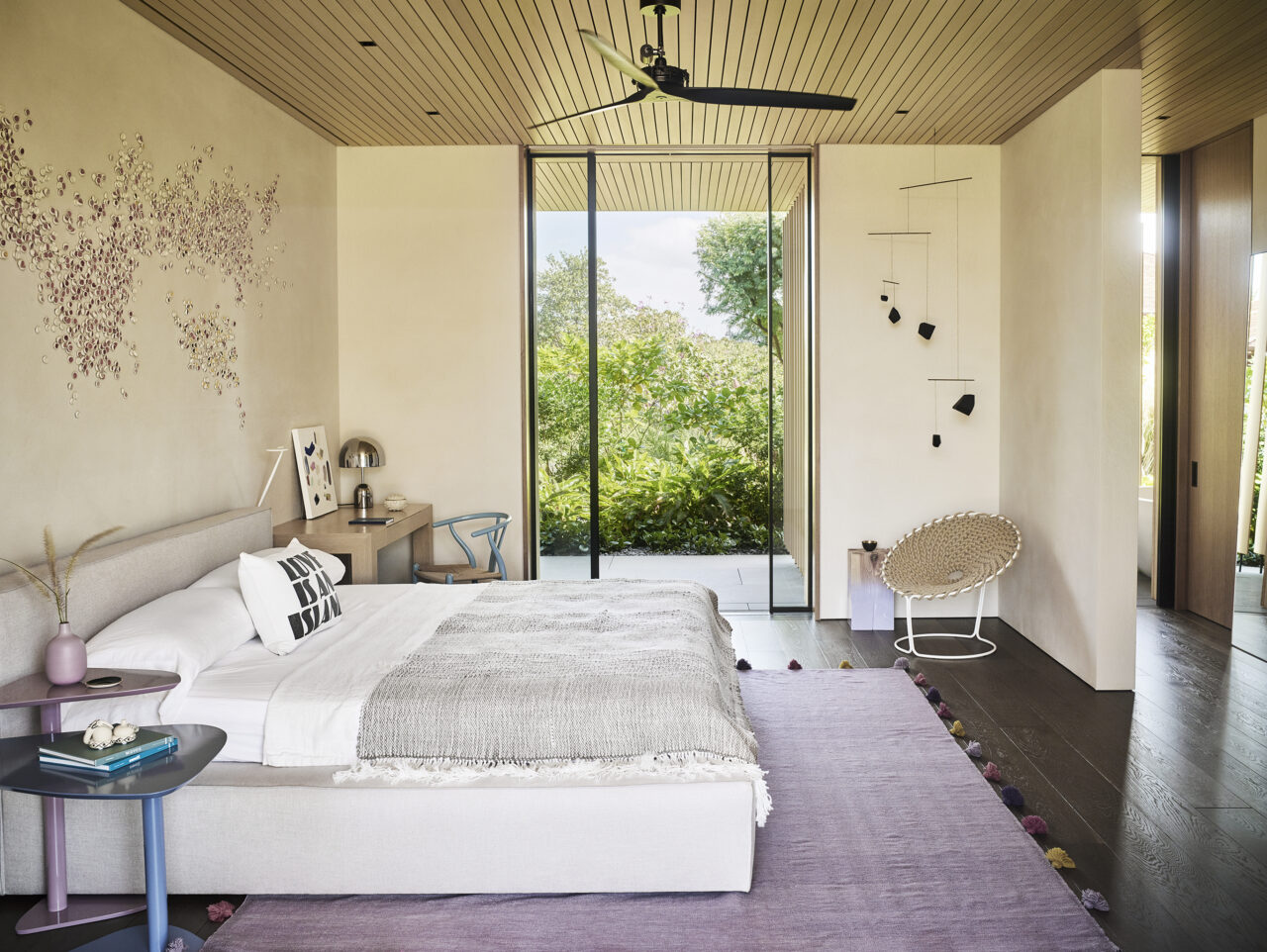 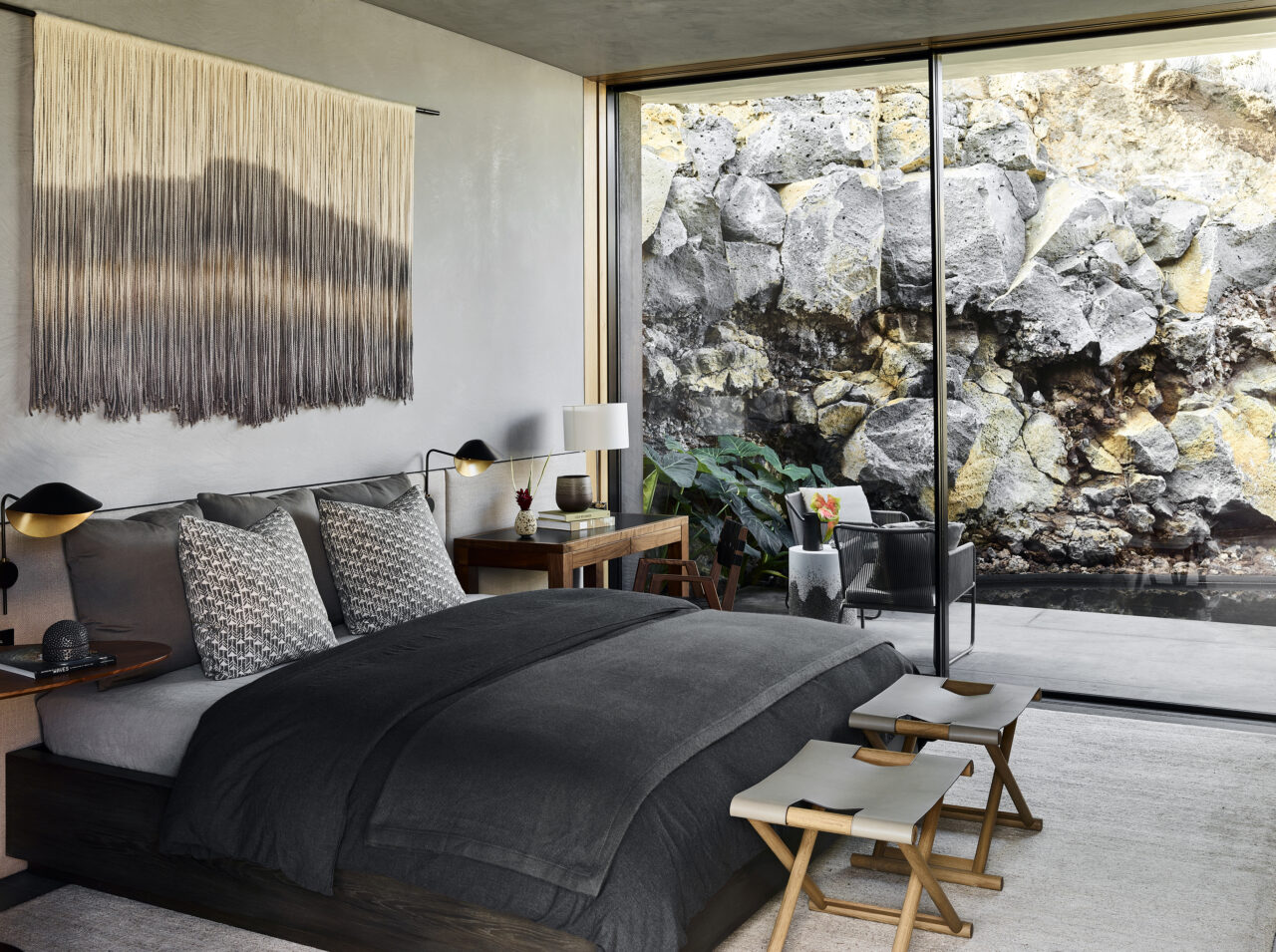 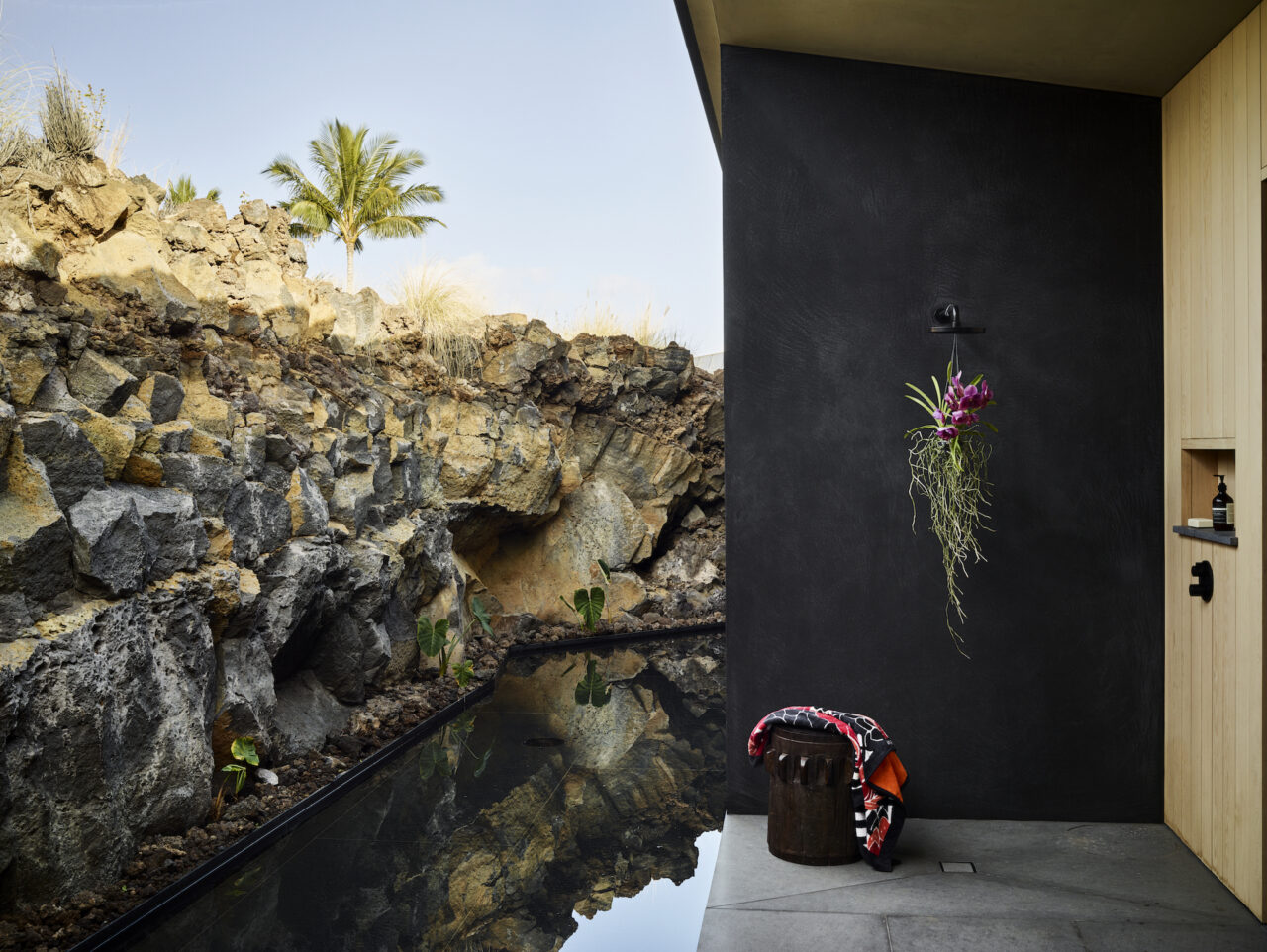 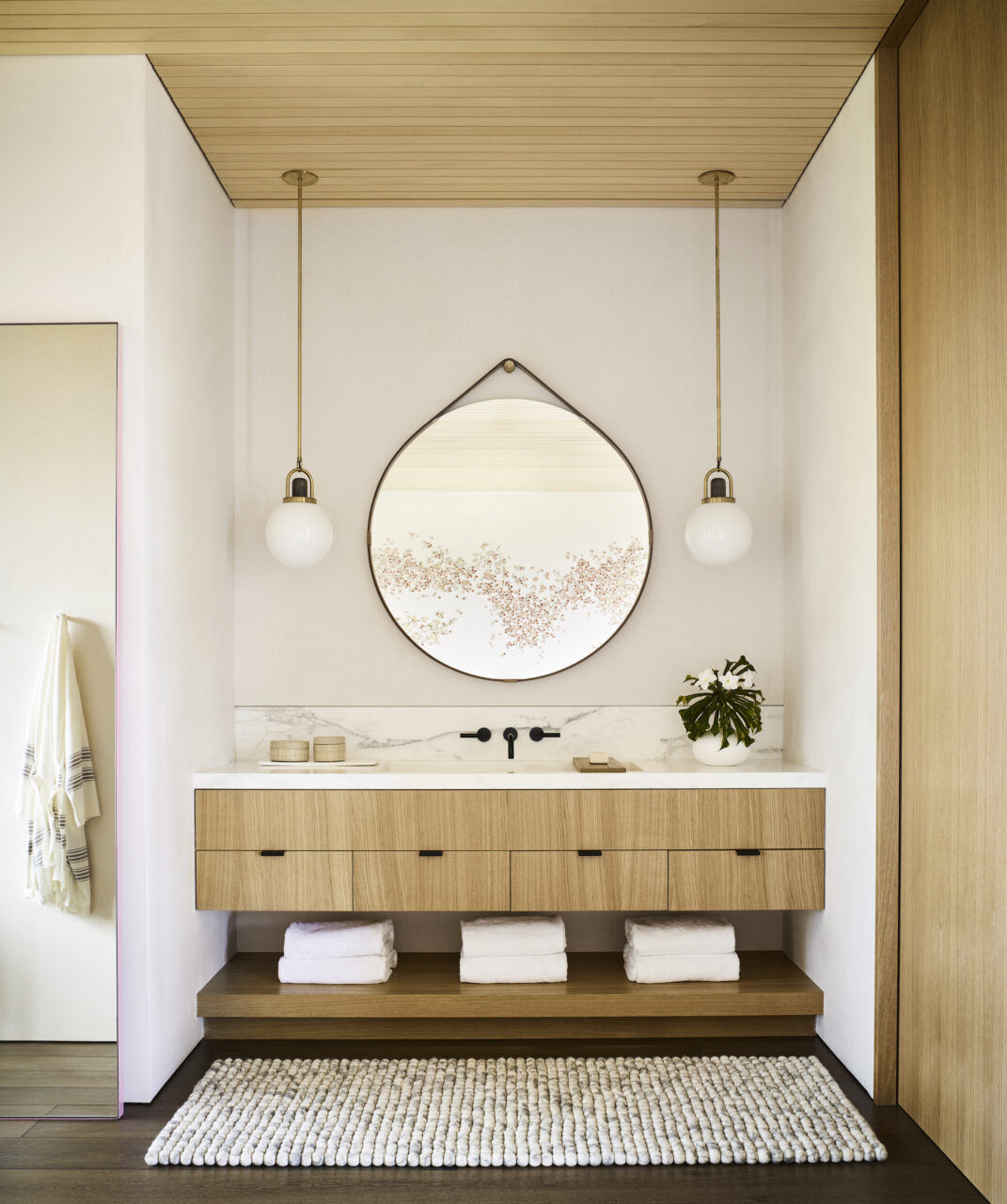 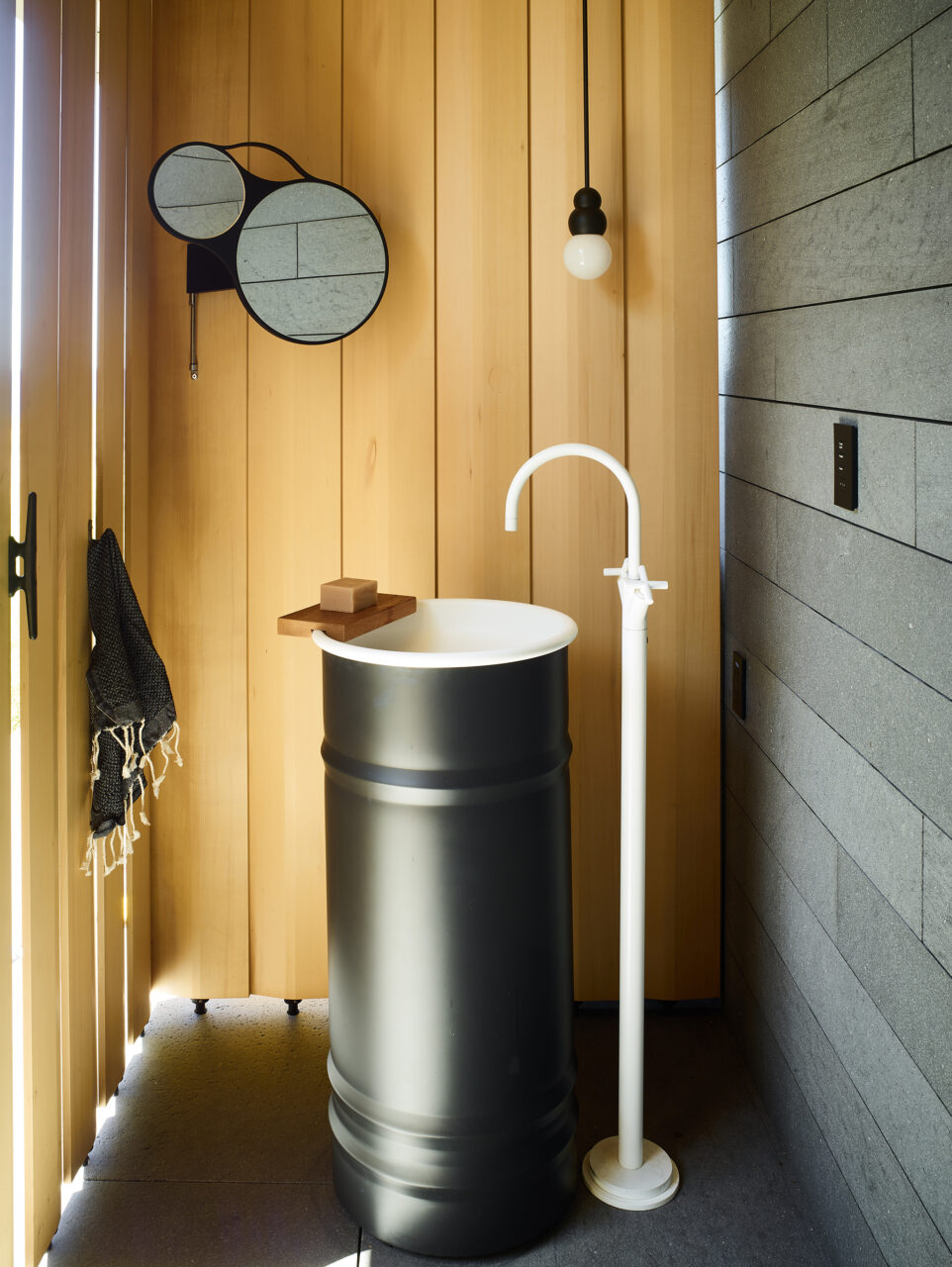 Blending the line between inside and outside, the courtyard is framed by a raised tree bosquet and lava outcrops mirrored by a series of reflecting ponds. The courtyard serves as a private gathering space shielded from trade winds where guests can take in and appreciate the views of the mountains and the sea.

The guest hale on the mountain side of the property places an emphasis on the natural beauty of the layered lava formations. To create a sense of seclusion and privacy, decorative corten pickets enclose a furnished entry courtyard, while the living roof helps the building discreetly blend into the rugged landscape. As you enter the guest bedroom suites, the focal point of the experience becomes a striking outdoor lava grotto space, deliberately pulled away from the building to create a sophisticated and moody private outdoor terrace where guests can admire the beauty of the natural lava and bathe in privacy. 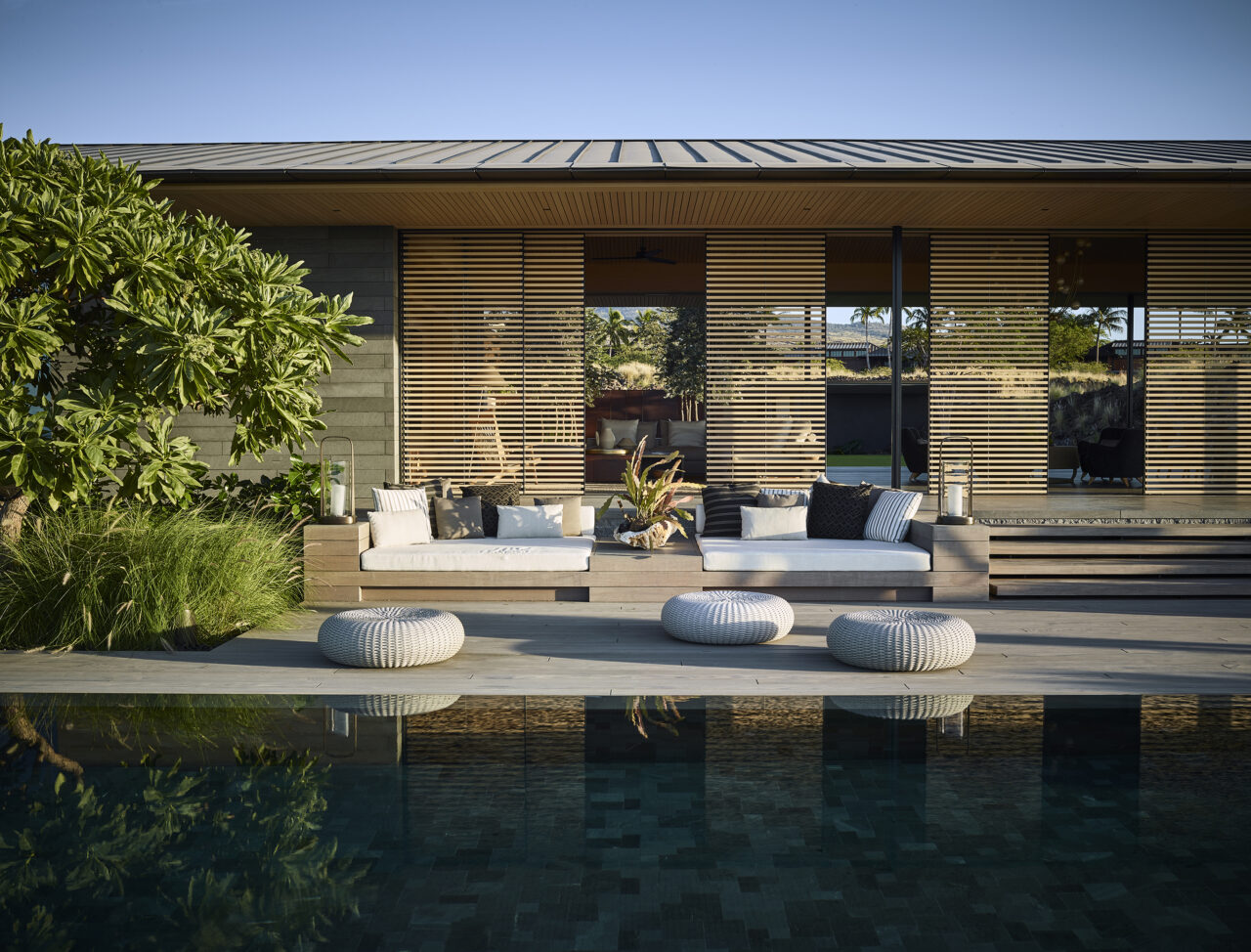 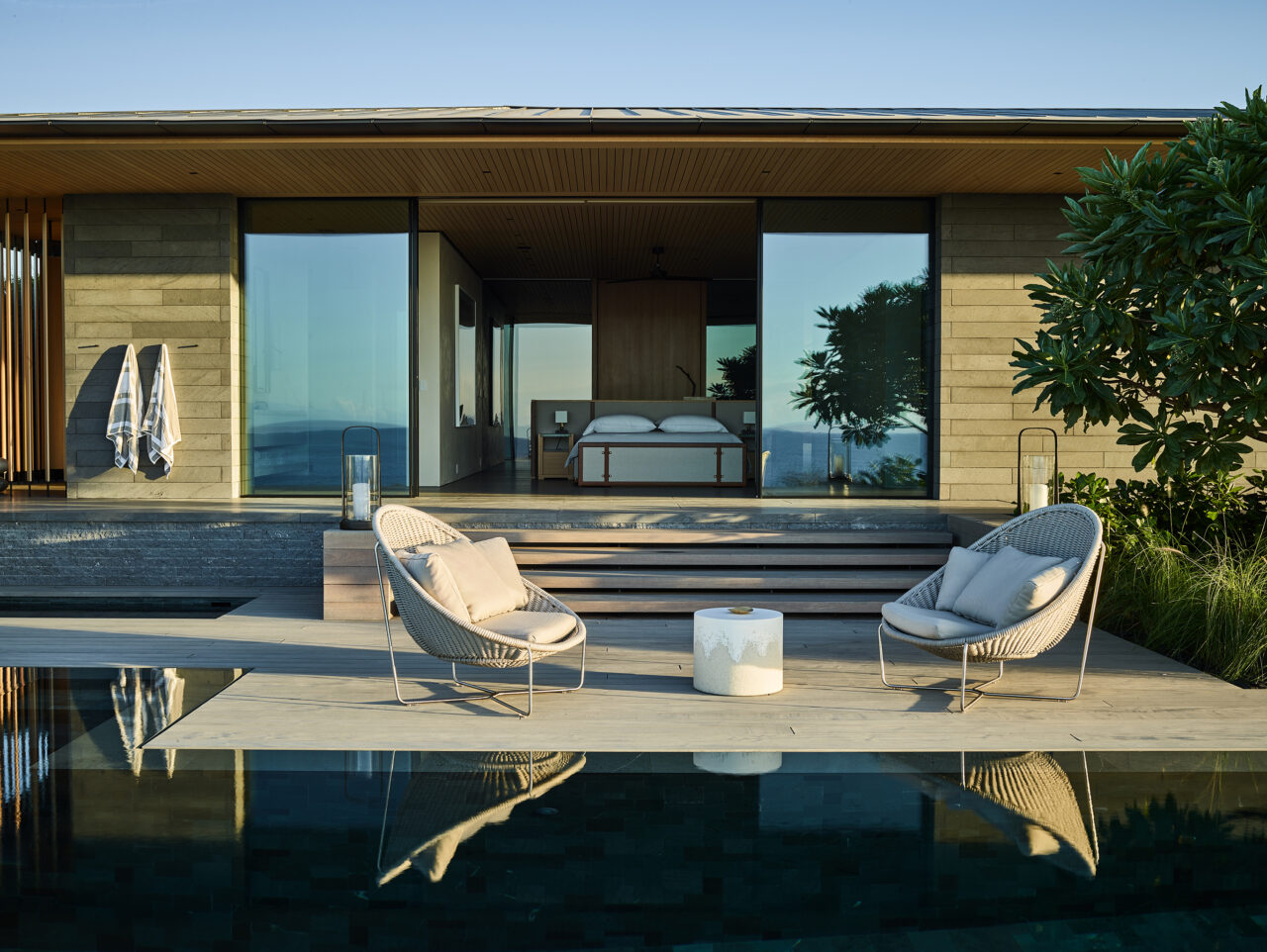 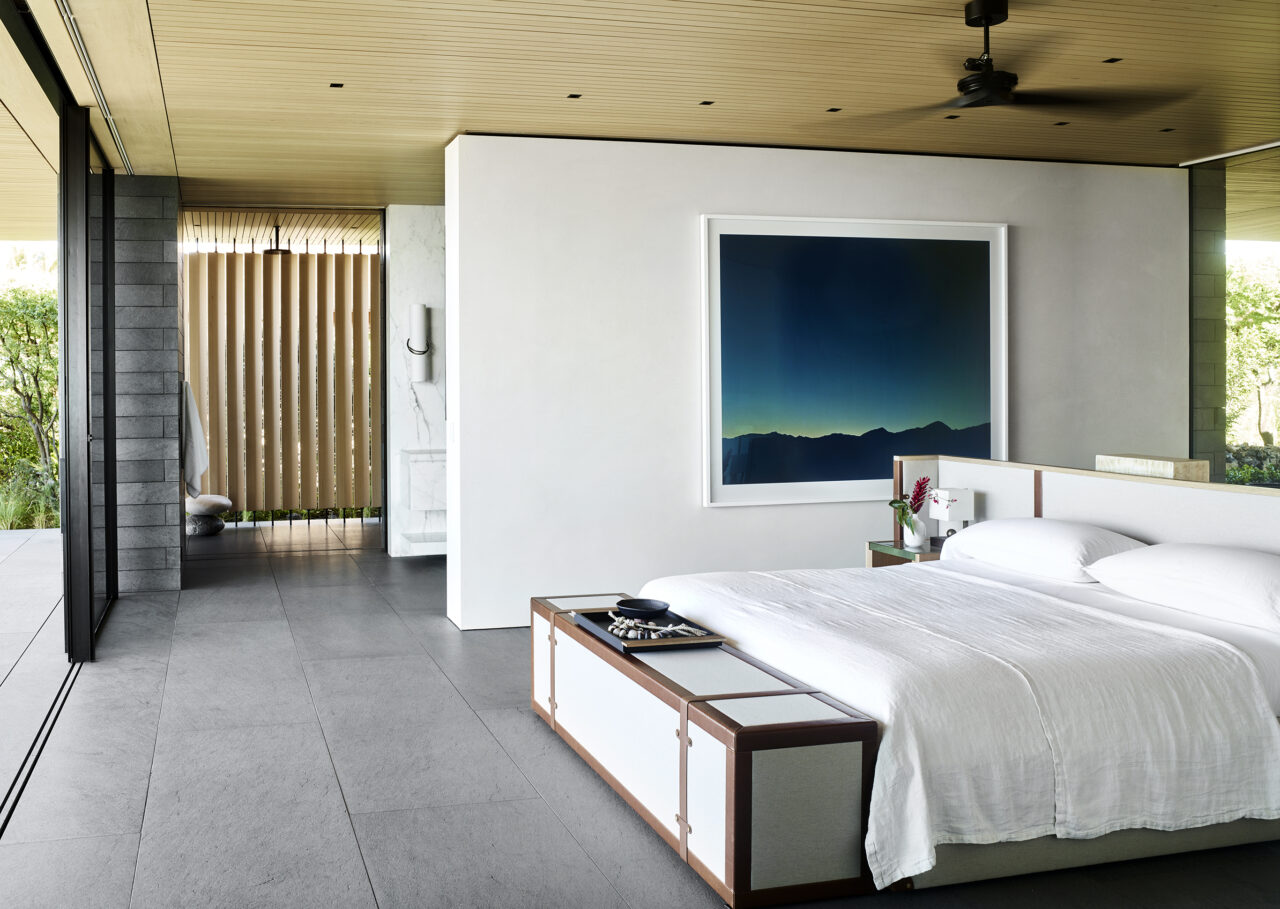 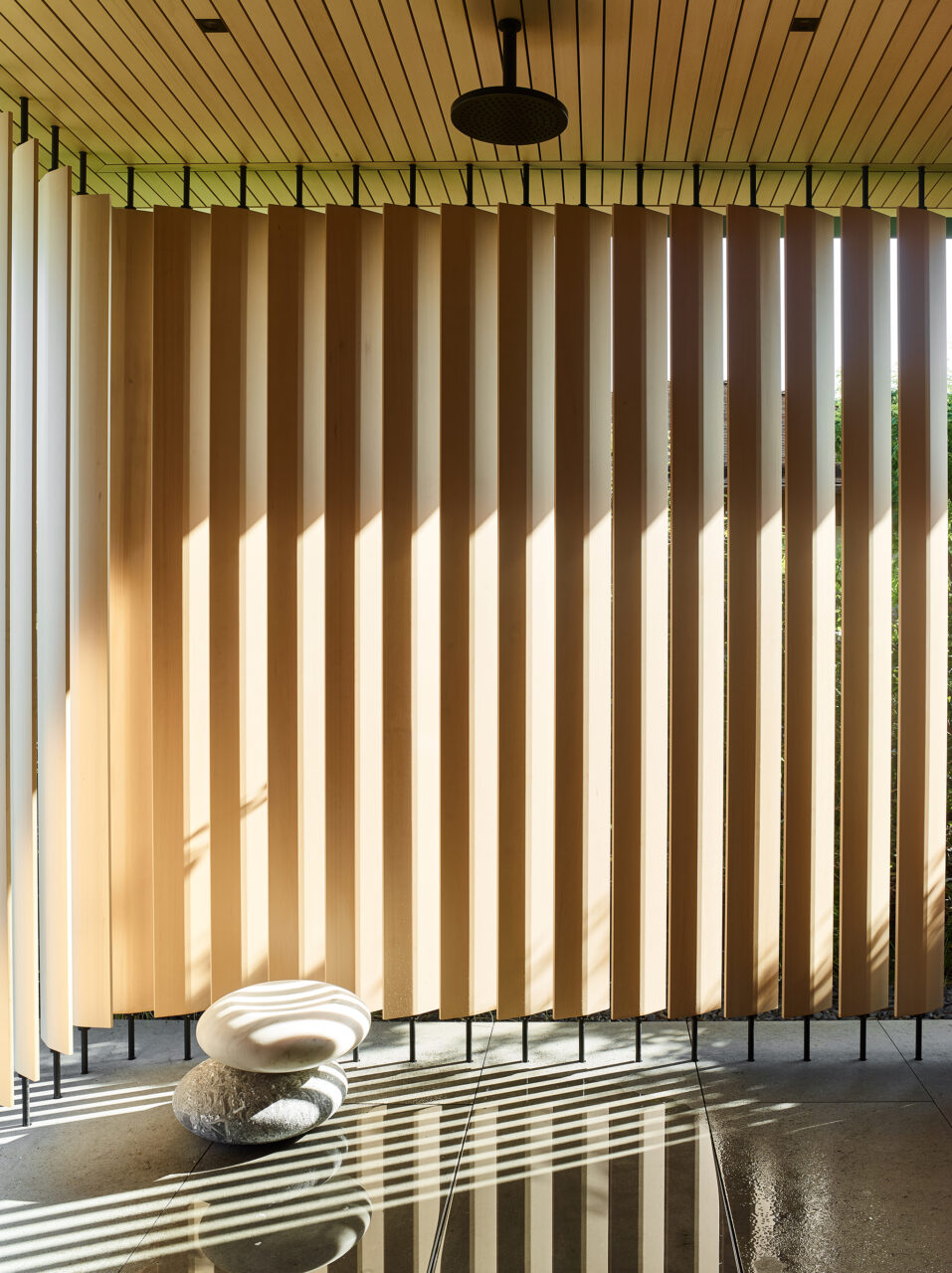 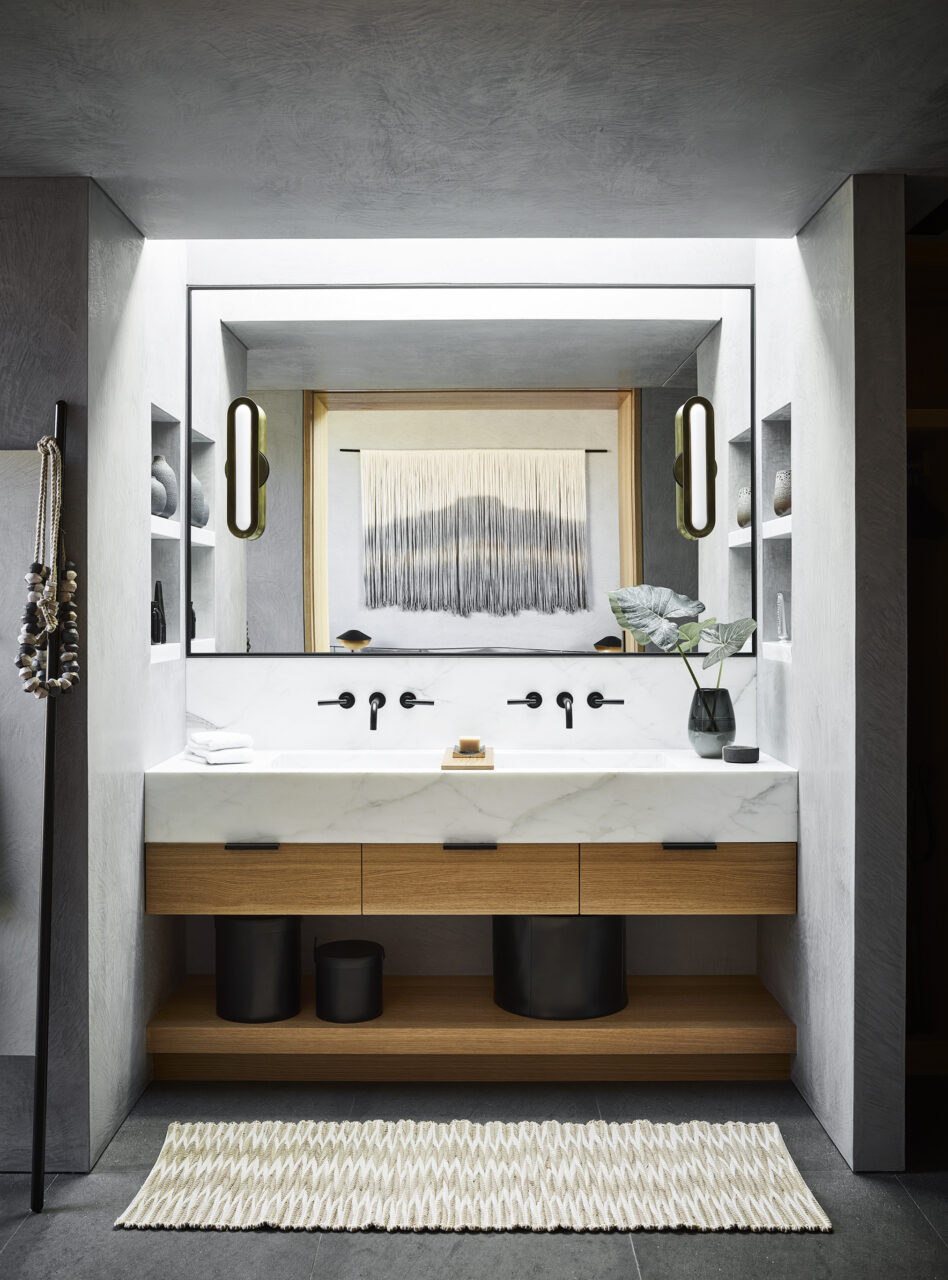 A walking tour through Kona’s history is easy with all the shops and restaurants around to visit places like Hulihee Palace. Once a summer vacation home for Hawaiian royalty and built in 1838, today this is a museum showcasing Victorian artifacts from the era of King Kalakaua and Queen Kapiolani. The Palace features beautiful koa wood furniture, ornaments and artifacts from Hawaii’s royal past. 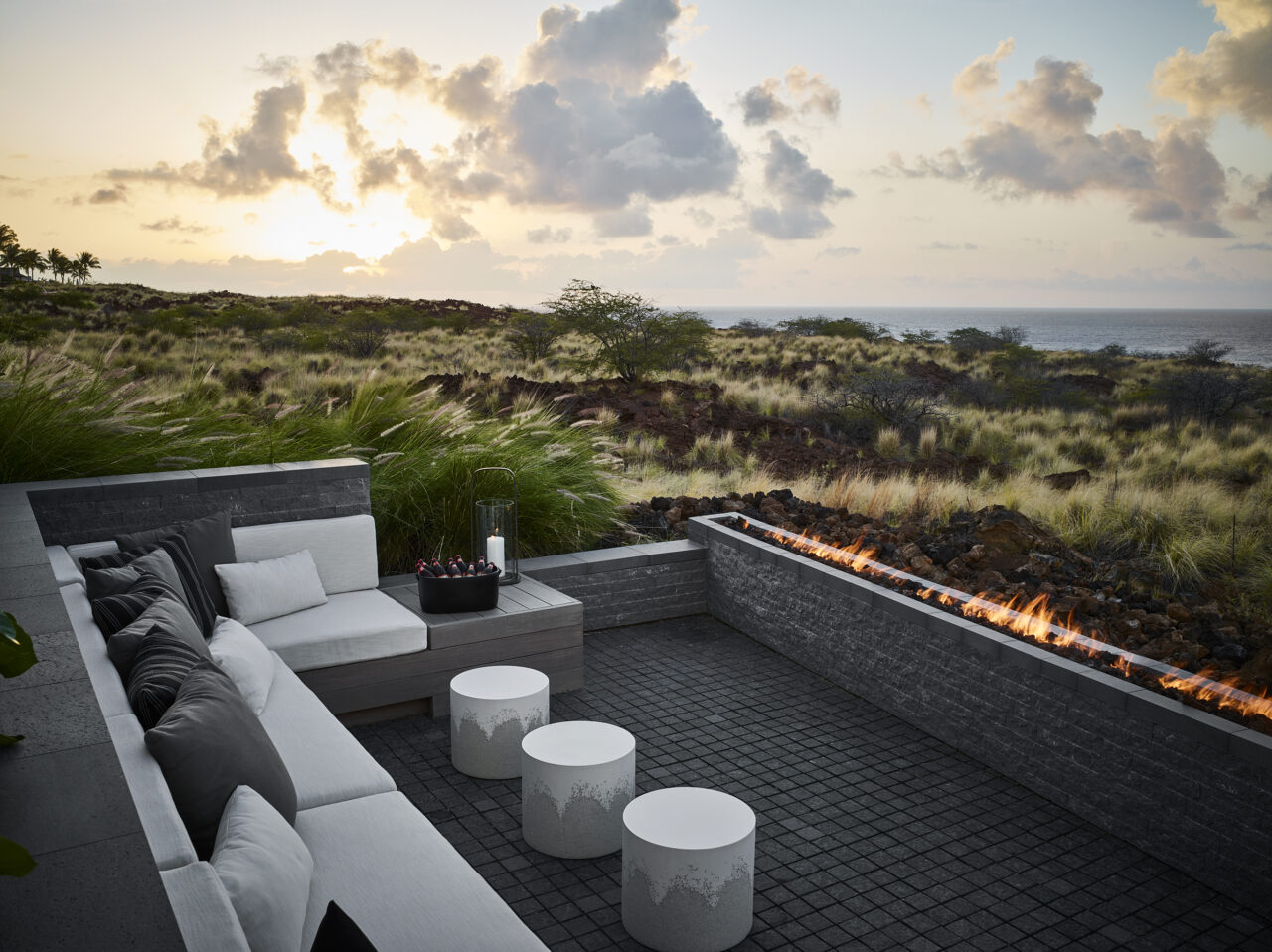 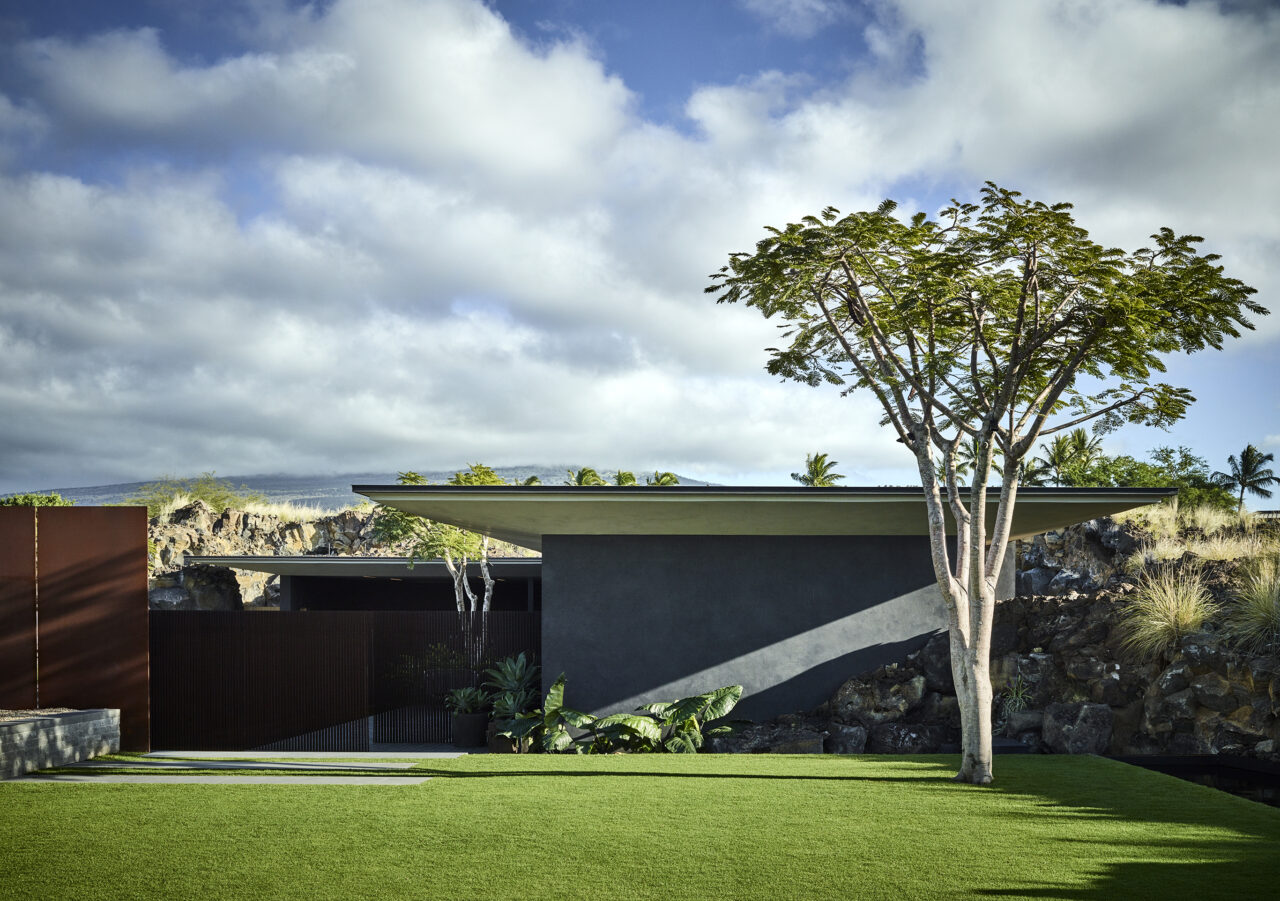 Other significant historic places include Kealakekua Bay to the south, where Captain James Cook first set foot on the island in 1778 and where he was eventually killed. South of Kealakekua Bay is Puuhonua o Honaunau National Historical Park, a well-restored Hawaiian ‘place of refuge’. North of Kailua-Kona is the Kaloko-Honokohau National Historic Park, a 470-hectare park that lets you explore early heiau (temples), fishponds and petroglyphs.

One of Kona’s most memorable experiences is going on a manta ray boat tour to scuba or snorkel with these gentle, graceful sea creatures. Kona is also famous for its deep-sea fishing and on land, don’t forget to travel to the cooler upland slopes of town like Holualoa, where you can sample the distinctive flavors of 100% Kona coffee.