Forever Chasing Rainbows? An Intricate Richness Eases Us into a Composition of Nuanced Emotions That Buzzes Brightly and Beckons 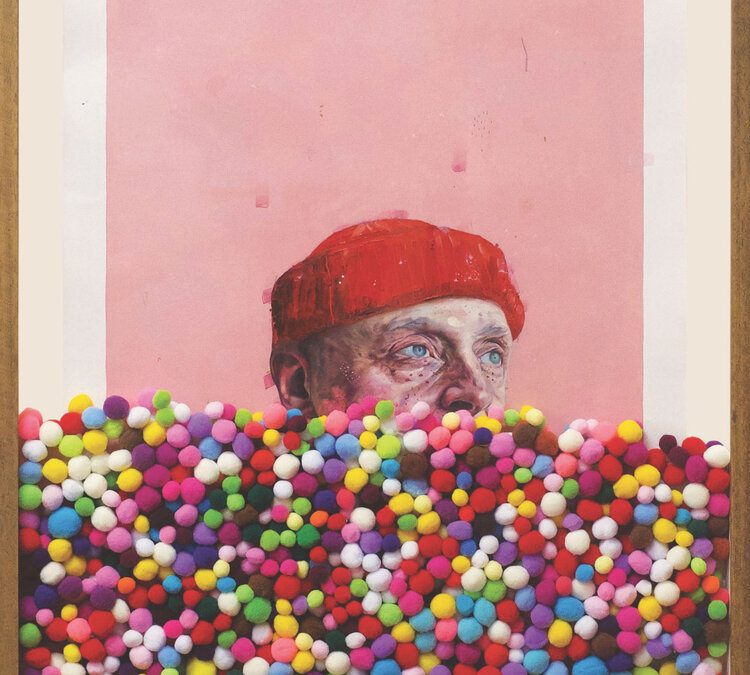 In the wake of a recent return from a three-and-a-half-year sabbatical stopover in Mexico where Christiaan Conradie travelled with the wild and determined intention of learning Spanish there and surfing its Pacific paradise, we’re swaddled back into that familiar mystery and humbling aperture where wondering about life’s spontaneity persuades us that it is its own true artist, and we are repeatedly at the mercy of it being lived on its own explicit terms – despite, or on account of, our original intentions.

Not only does the 37-year old, self-taught South African painter speak Spanish superbly, but he returned to Cape Town married to a beautiful Mexican academic and both are about to become parents *cue the applause for life being an artist in its own right*. 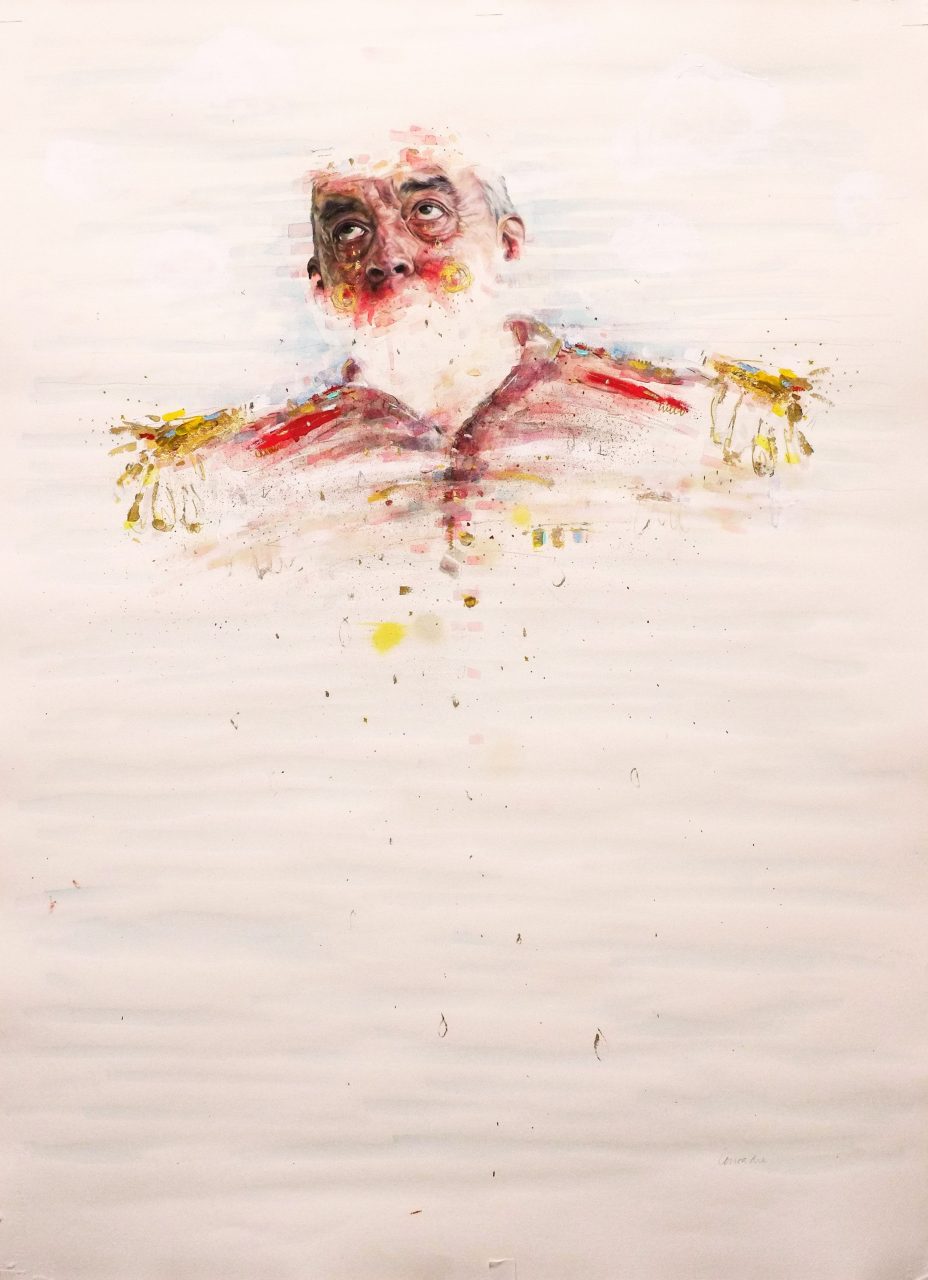 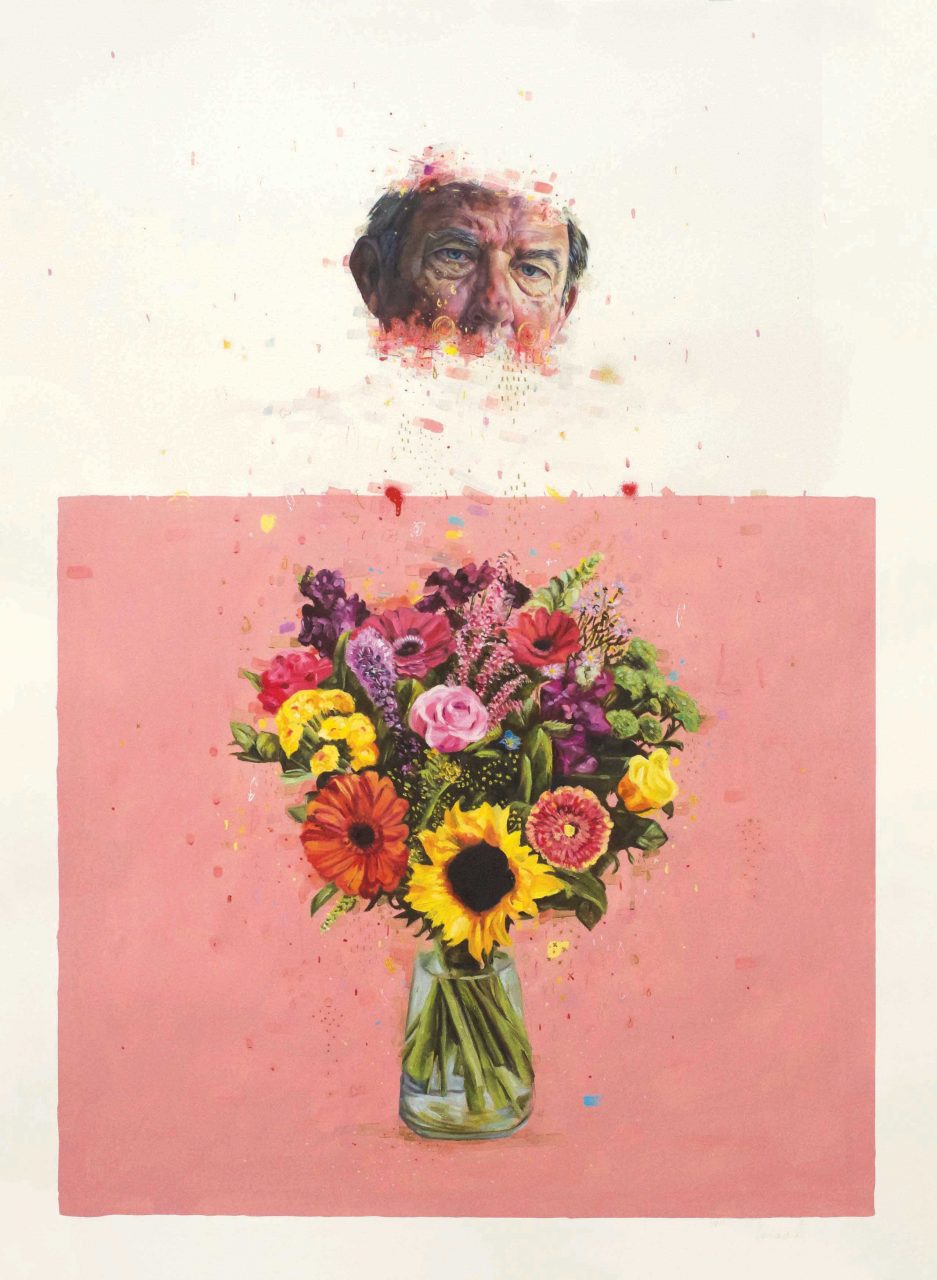 As a result of his extended expedition in the Latin American playground, he’s worked on a series of artworks that draw inspiration from the harsh confrontation of the different realities he witnessed in the country. Mexico captured his imagination aesthetically as much as it did emotionally. A new space came to life, both floral and bloody, both spiritual and down-to-earth. Conradie’s proposal aims at finding a new meaning in the symbols, fragments and sensations of his Mexican stay, while intending to adapt them into his work. Thanks to a spontaneous, seamless integration of this land of Aztecs and Mayans, mescal and agave, temples, ruins and deep magic spirituality into his art, Conradie provides us with powerful, brand new aesthetics and spaces. 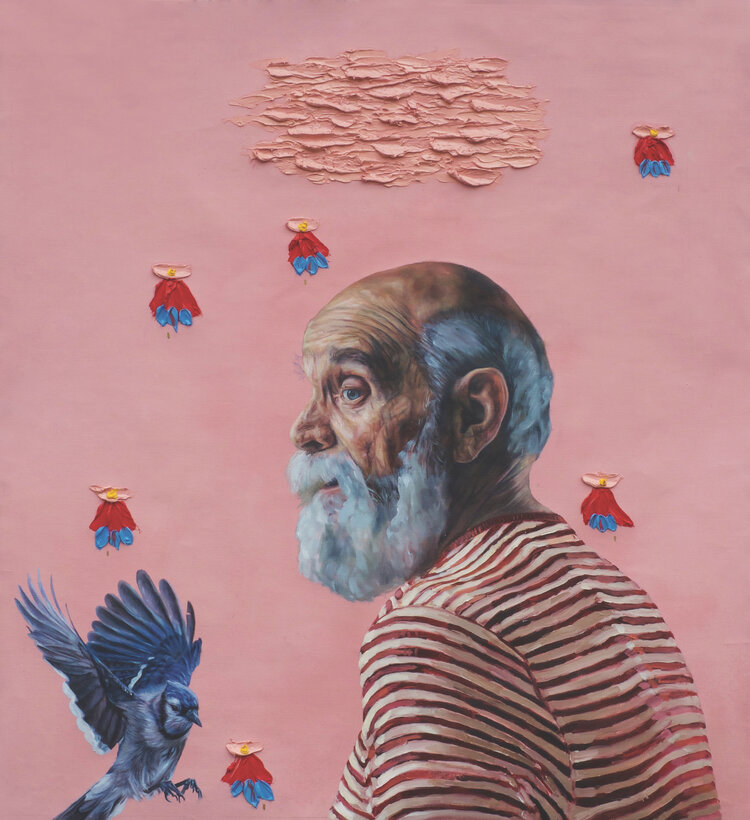 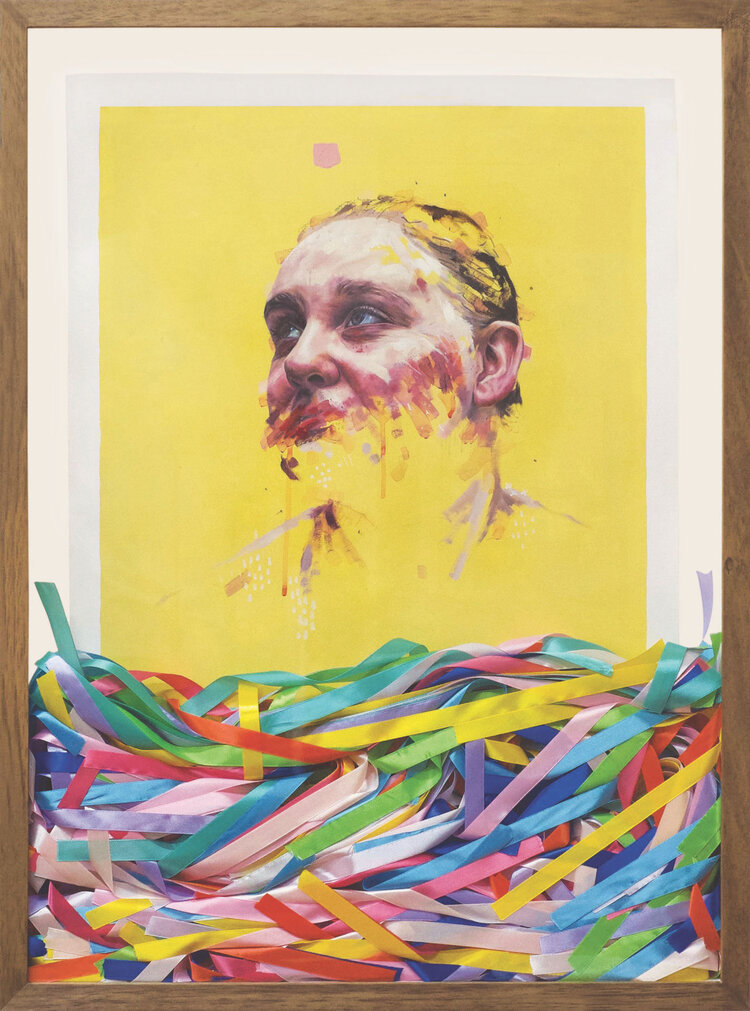 The artist paints in isolation, meaning he works in his own dimension and space: there is only one Conradie. Not being someone to seek external approval, he says: ‘I certainly appreciate positive reactions to my work, but I don’t necessarily get a big kick out of praise. And, I’m not swayed by insult or slander. I’ve always made work in isolation. While in the creative process, I’ve never considered what another person will think of what I’m doing. That’s what I mean when I say I paint alone, I create alone.

‘I must share that one of my school teachers, Andrew Putter, had an indelible influence on me; as well as a facilitator I learnt with during a brief life drawing class, Julia Teale.’ Christiaan became a full-time artist in 2010 and admits to experiencing breakthroughs using three-dimensional elements, yet he allows himself to explore slowly, so as to get as much as he can out of every phase. Any three-dimensional elements are part of the painting, but artworks remain ‘paintings’ with the paint medium being paramount.

In 2013, Christiaan’s work was sought by a curator from a gallery in Paris and their professional relationship developed over time travelling to fairs to exhibit his work and Christiaan considers himself fortunate to still work with this contact today. 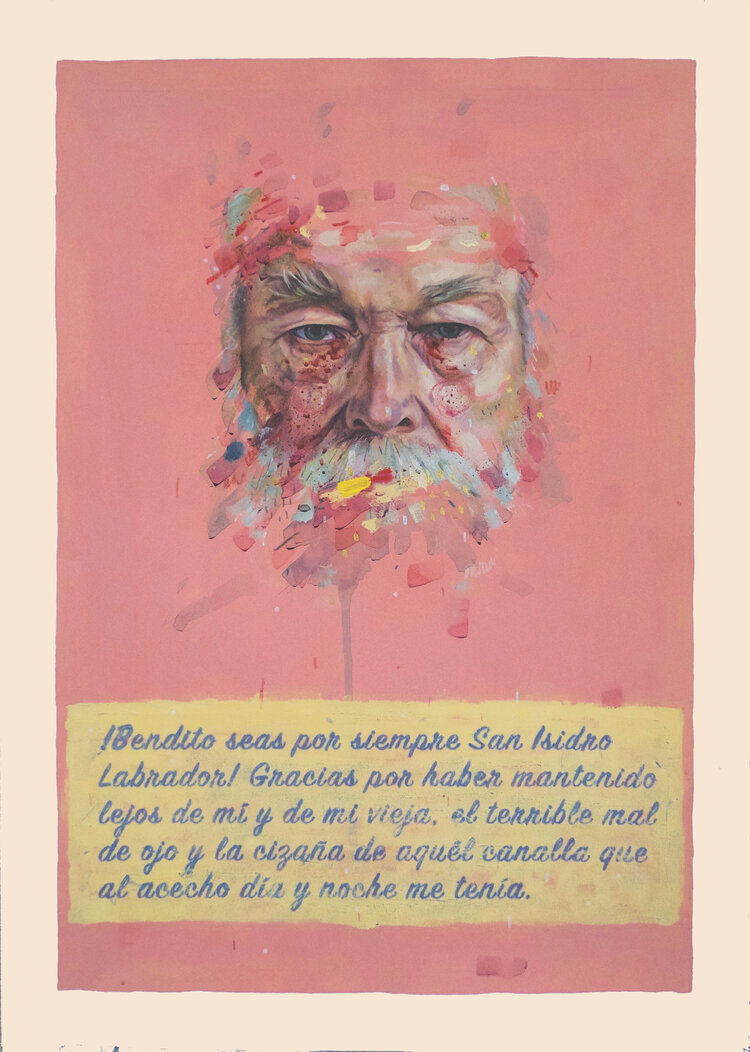 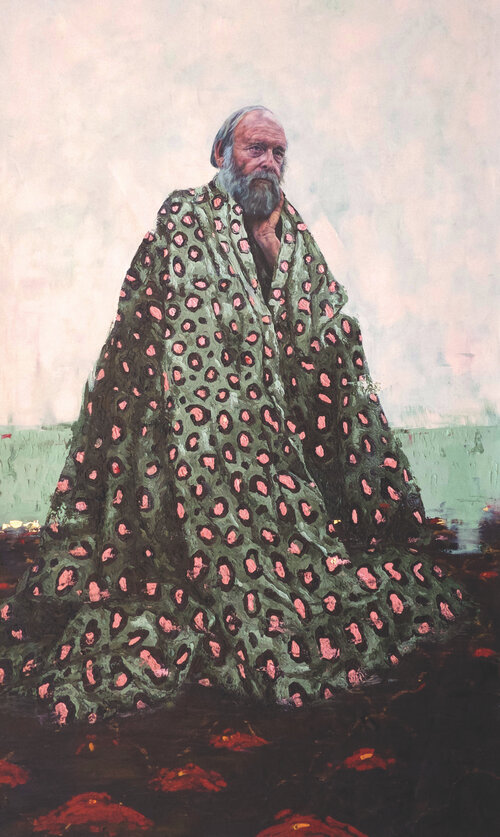 Composed of contrasting elements that sit in one coherent window, at times a state of discomfort or ambivalent emotional engagement is elicited. This capacity for contrasting themes in artworks to coexist so naturally nods to the richness of the artwork’s experience. As an observer, I was led to question and then ultimately accept my own motivating reasons when pursuing truth under the themes of age and vitality, death and energy that these artworks provoked. I generally pursue themes and lean towards visuals that bypass neither pleasure nor metaphysical challenges, those that ultimately benefit and enrich us despite temporary discomfort; and that sometimes means enduring a complex range of emotions – a welcomed antithesis to an anaesthetised experience of life and art. Composed of these nuanced emotions and associations, we’re led to process connections between so many potential meanings.

Inspired by the loose, fast and dynamic brushstrokes of Rubens, he picks up on the carnal and Dionysian exuberance of human bodies, turning paint into an ode to anatomy. Like Rembrandt, he isolates living bodies to better capture them, and creates a disruption with his time. By doing so, he depicts a transfigured, almost overly alive human body and an intimate space of reflection within our complex world. 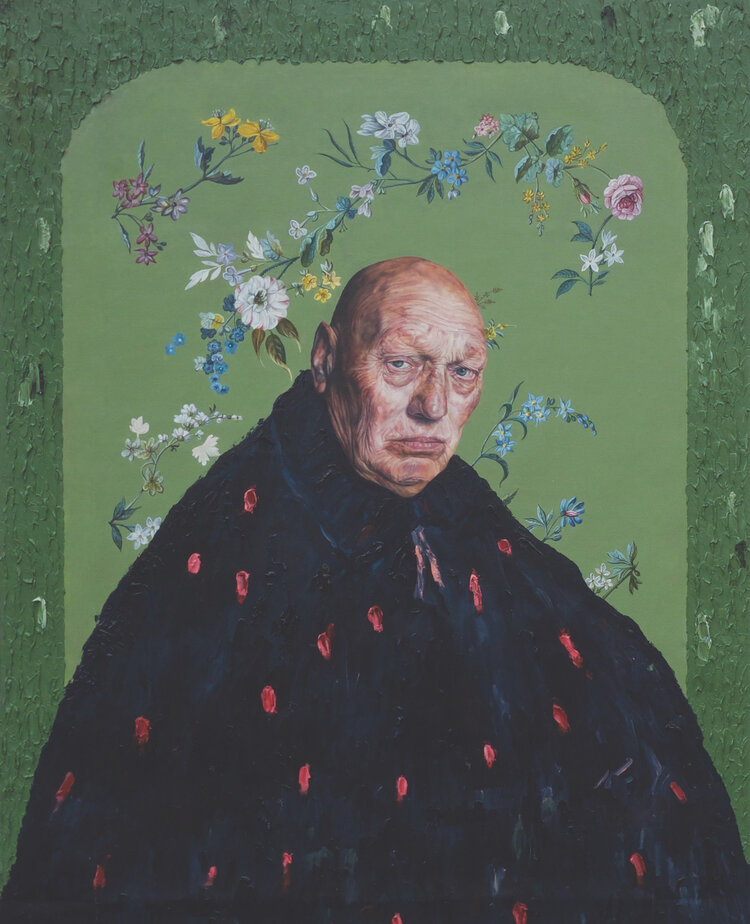 Conradie dedicates extreme patience and precision into crafting his works and invites us to examine his human characters and to relish in his rational, measured technical intentions. He paints these figures in silent and immovable spaces, calling for reflection. Impacting, hyper-realistic figures appear as dismembered, incomplete, textured and sensitively rendered. The artist points to the limits and weaknesses of the human body. Time is ‘felt’: it weighs. While the painted bodies, skin and objects highlight the weight of time, time comes to life through colours and textures.

With clear views on what he wants to achieve, he doesn’t rest until he finds the materials needed to awaken the preferred emotions and will use oil, watercolour, objects and lights among other materials as devices that allow him to transit between two worlds: the rational and the intuitive. His subjects are surrounded by unique, peculiar aesthetics. The paint breaks free from the linear and rational world through its own plasticity, textures and uncertain forms, as well as through its irregularities and intensity. 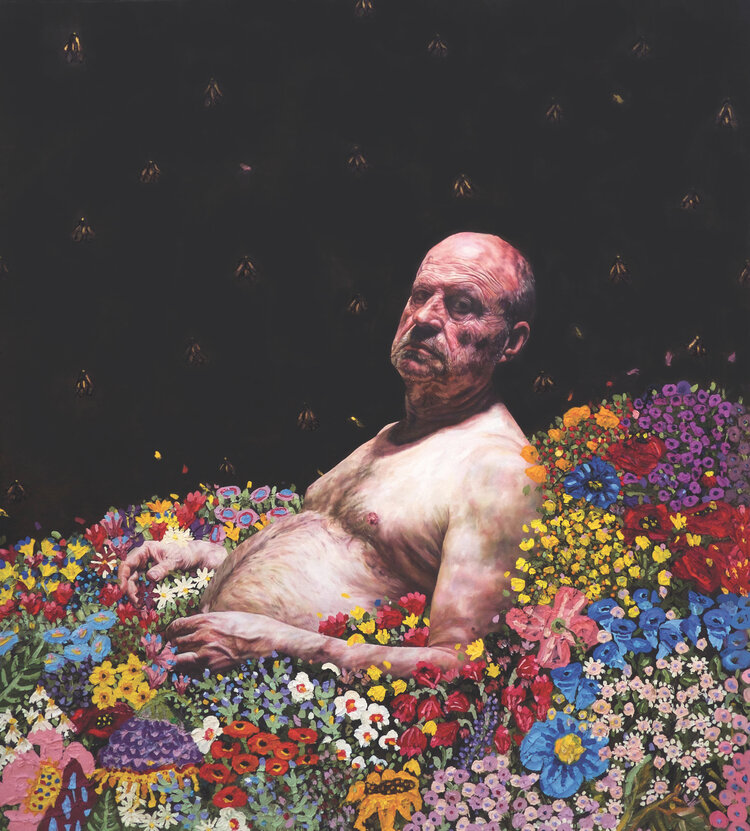 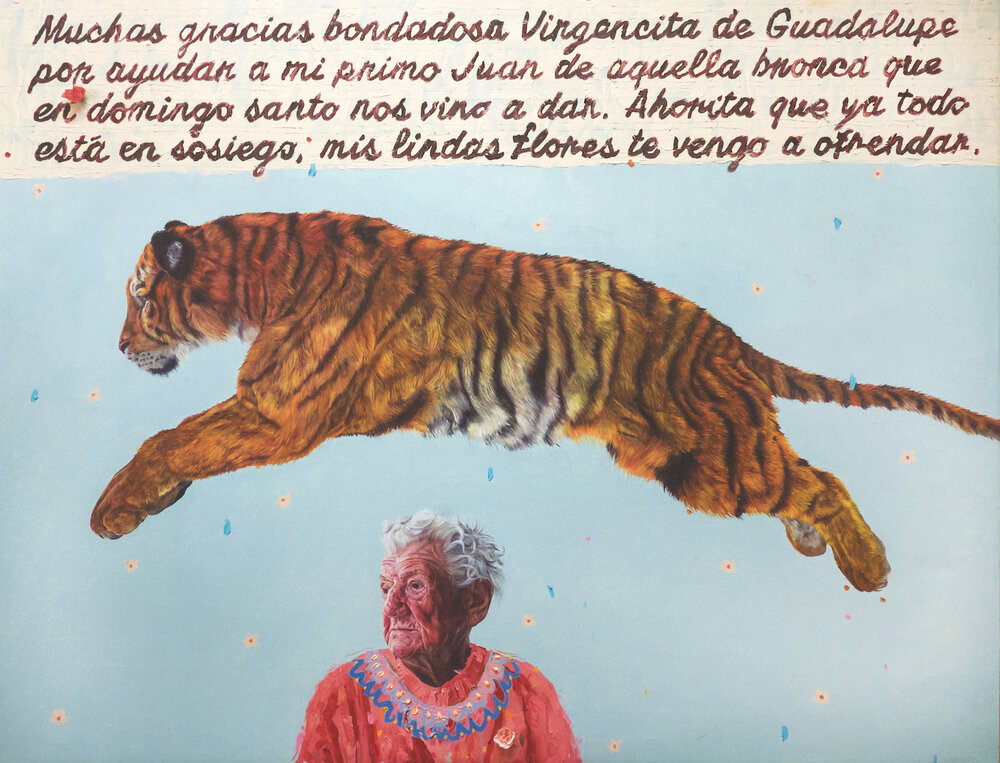 Christiaan uses folkloric components, references to serenity and violence, order and chaos, rationality and insanity, hope and despair; and this play yields a deep sense of vitality. Dichotomous spaces are the essence of his works. This is where I found my relief: in the freedom inherent in dichotomy and the multiple reflections of myself available to me at different times when viewing these works.

While moving through what may appear to be the threat of a mortal channel during the relentless quest to find the eternal rainbow, we are privileged to transcend via a wise smirk and glassy eye, via a placid frown, via experience, colour, conflict and depth and surrender with a smile to the triumphant faces of symbolic loss and of symbolic gain, the faces of play and of pleasure. 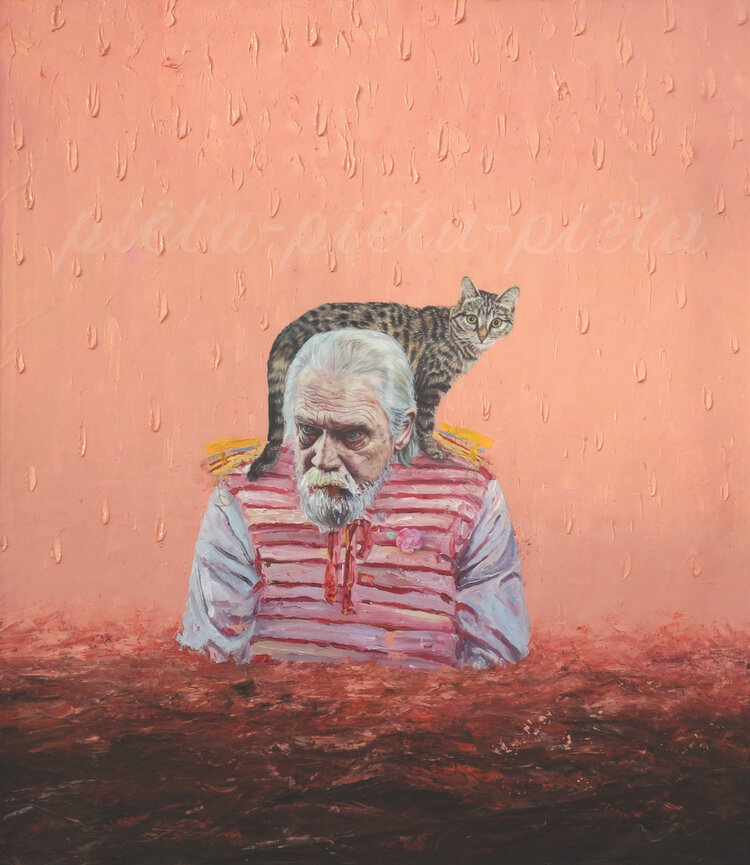 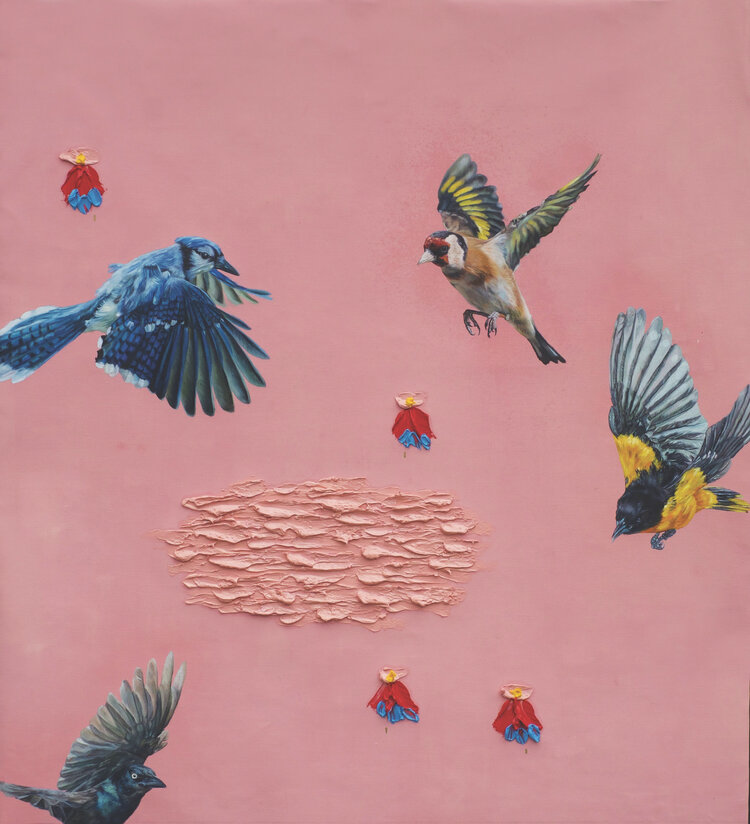 Ashraf Jamal wrote an engaging piece for the Art Times that explores the array of abstract impacts Christiaan Conradie’s work submits us to. This with a lens borrowed from an all-embracing understanding of the worlds of art and philosophy among his own meditative impressions about the calibre and potential healing effects the works carry. Says Christiaan, ‘I’m lucky that Ashraf Jamal is intrigued by my work and committed to writing a book with me. The idea behind the book’s purpose is to contextualise my collections by providing avenues of the meanings behind them and to allow appreciators to indulge in deeper contemplation, accompanied.’

Christiaan Conradie’s solo exhibition of latest works will be held at the 131 A Gallery in Cape Town, South Africa from the 29th of April until the 8th of June 2021. Online access to the exhibition is also available via this link.