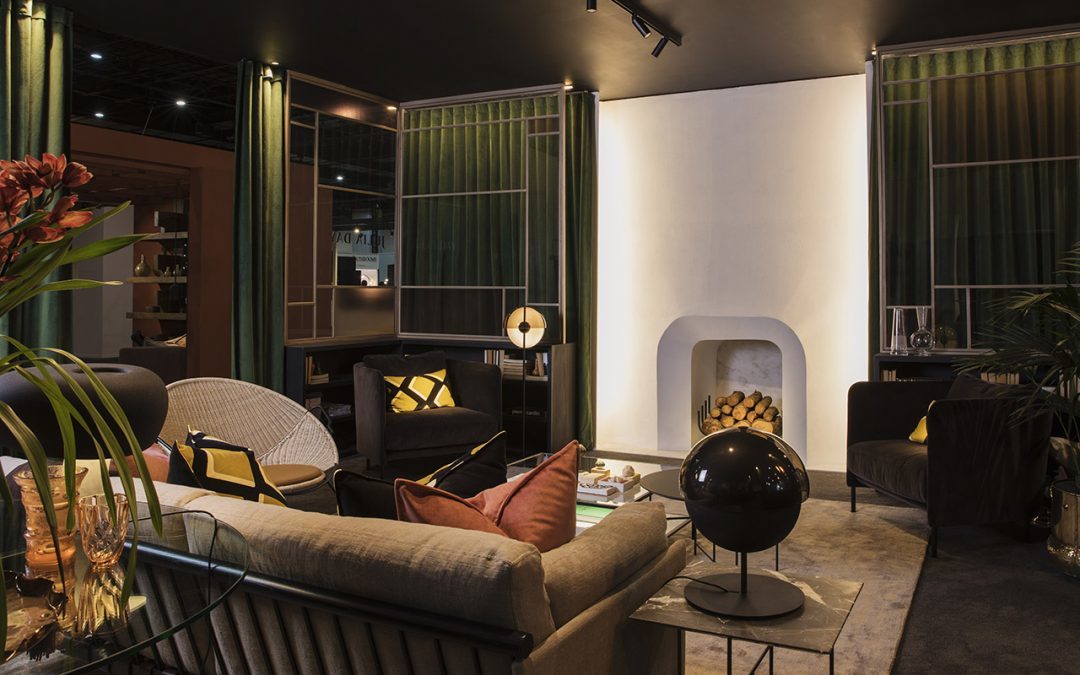 Teaming up with industry experts, Julia Day managed to create a luxurious lounge that cocooned visitors – a space so convincing you’d never know it was temporary.

The stand was a fully realised interior quietly emanating the kind of understated luxury that the interior architect and designer is known for. Fittingly titled In-Residence, Day styled the lounge as if it were her own home. “If you want people to imagine they’re in a real space, you have to go the whole way,” she insists. 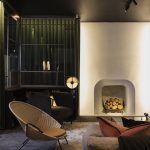 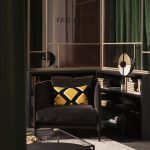 In an ode to design harmony, her lounge provided a serene platform for the renowned brands that it hosted and a platform to showcase the exceptional work of the master craftsmen she collaborated with.

Riaz Aziz, director and owner, started T&R Design in 2015 with a team of specialist and experienced artisans. Specialising in bespoke cabinetry and shop fitting, as well as offering the full gamut of building services, Riaz has spent 25 years honing his craft. Since 2015 T&R Design has signed up and fitted retail stores of international brands as well as the elite local brands, including Hugo Boss, Hackett, Weylandts and Police Clothing. 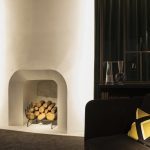 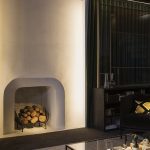 Their contribution to the Julia Day stand was to manufacture a once-off fireplace in white with Julia Day’s intricate design elements. Working closely with Day and her team, they managed to produce the marine ply crafted fireplace within a five-week period.

They also realised Day’s oak cabinetry design that was placed under the steel window frames – these were coated with a charcoal mono-coat finish to compliment the soft furnishing within the space Julia Day envisioned. Other elements completed were the flooring (substrate) and the ceiling. 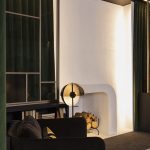 An alchemist in the steel forging field, Sven Magnussen of Pazz Design is first and foremost a problem solver. ‘People who have the biggest headaches come to me,’ he says. He began 23 years ago as a design engineer for Centurion gate motors, before doing the steelwork for architects like Johan Slee and Jo van Rooyen, which earned him stripes for nothing less than utter perfection. Currently, Magnussen is best known for his Manhattan style windows, as seen at Julia Day’s stand.

For In-Residence, Magnussen created the shell, which included the floor structure and roof. He also manufactured Manhattan loft style screens, as per Day’s detailed drawings and design. 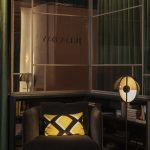 With the screens taking the load of a nine-metre span, there were no vertical posts in sight. Cleverly offset, these screens were not only a decorative feature but performed structurally too, allowing the ceiling to cantilever all the way around.

Marc Machtelinkx masters the use of lighting to bring architecture and interiors to life. He opened ELDC in 2001, having emigrated from Belgium with a decade of prior experience in lighting. He took Julia Day’s concept and curated the lighting to enrich it. ‘He has integrated his design into the overall concept and read the mood,’ adds the Day. 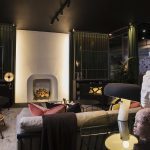 ‘Here we tried to go as minimalist as possible but added one or two eye-catchers,’ says Machtelinckx. His objective was to enhance Julia Day’s design and colour scheme. With the versatility of the Delta Light magnetic track, the design duo was able to highlight certain parts of the room and create depth by working with light and shadow.

The glass pendants and the feature pendant were also from Delta Light, from their ‘Reflections’ range, which was launched at Euroluce in Milan last month. The table and floor standing lamp are called Theia and are from a Spanish company called Marset. The Greek Goddess Theia is the mother of the sun, the moon and the dawn. By merely turning the shade, this fitting can create a direct lighting effect, i.e. the sun, or an indirect lighting effect as the moon. Because this was a living room setting, the designers thought it useful to add some lighting control to it. 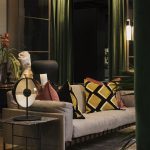 Operating from Pietermaritzburg, carpet manufacturing is the core of Belgotex’s business. Their extensive product portfolio also includes vinyls and artificial grass. Their focus remains on their innovation, quality and sustainable manufacturing within the flooring industry. ‘Belgotex believes in the design and creativity fraternity within South Africa and the continent at large,’ adds Edward Colle, CEO of Belgotex. 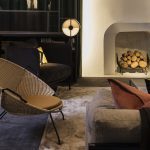 Dave Keever noted the calming effect the Belgotex Softology brings to In-Residence. The carpet was fitted by KBAC, a company formed by a merger of Kevin Bates Flooring and Albert Carpets. This year, they celebrate their 50th anniversary.

Liz Mitchell and her partner Steven Kahanovitz opened The Rug Store three years ago. For In-Residence, Julia Day selected a 100% viscose rug from The Rug Store’s Chelsea range, chosen for its beautiful sheen, the illusion of movement and soft texture. The champagne colour, which is one of the most popular options, coordinated perfectly with the furniture and mink carpet from Belgotex. 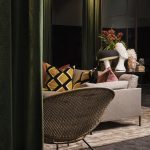 Petra Kriek Interiors is a leading curtain and blind workroom in Linden, Gauteng, is wholly trusted by top local and international decorators and designers, including Julia Day, who selected them for In-Residence. 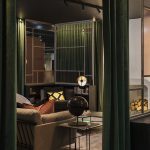 The curtains they produced added softness, warmth and comfort to the lounge setting, contributing to the cocoon effect that Julia Day envisioned. They presented as a wave, also known as ripple curtains, in a luxurious plush green velvet supplied by Warwick Fabrics SA. The result was an elegant contemporary style, yet simple and creates the look of a continuous wave when closed.

Working in close collaboration with Julia Day, Marina Walsh’s sculptures brought an authentic and unique contrast to the high-quality finishes and furniture that distinguished Day’s stand. 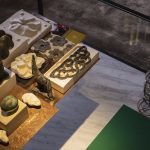 ‘We were trying to bring in a raw realness, something that’s not branded. It was an exploration of textures and colours,’ says Marina Walsh, a Johannesburg based sculptor. Day included pieces that had been a source of inspiration in Walsh’s personal studio. Although these pieces were never intended to be displayed, Day noted the synergy.

The puzzle collection that was placed on the table is referred to as a ‘cabinet of curiosities.’ Walsh had been working on these elements for years and sees them as a story open for interpretation. 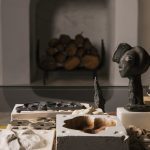 The Wish Collection’s accessories were included in Julia Day’s stand. The brands were well aligned in terms of understated luxury and quality that they both represent. The chocolate brown cashmere Frette throw added to the comforting cocoon ambience that the Julia Day stand strived for. Frette was founded in Italy in 1860 and is the number one global linen brand, supplying luxury linen to celebrity homes, 5-star hotels and super yachts. 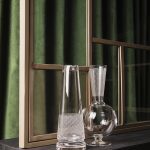 A water carafe and wine carafe from Christofle’s Contemporary Collection ware placed on the bookshelf. Christofle, a French brand that commenced in 1830, specialises in the finest, crockery, cutlery, vases, silverware and glassware.

Gregory Mark Landscapes brought the interior space to life with the addition of a Kentia palm in an upcycled antique brass planter. He noted that the Kentia palm not only blends seamlessly with the interior concept of Julia Day’s lounge, but would thrive long term due to its low light preference. The brass planter adds to the luxury feel of the space. 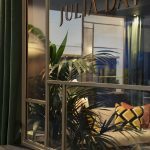 On the table setting, Gregory Mark sourced a cymbidium orchid that would pick up and highlight the accents of the room without being overpowering.