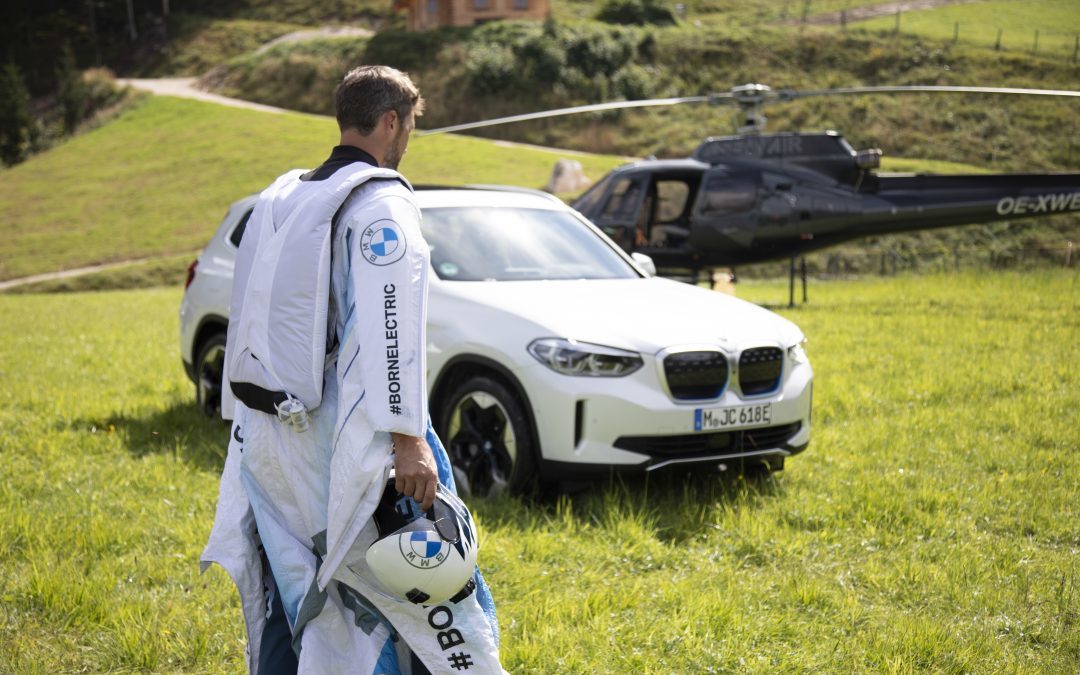 Through a cooperation with BMW i and Designworks, Austrian professional base jumper and skydiver Peter Salzmann fulfils the dream of flying in a most innovative way. The electric drive and newly designed wingsuit increase speed and flying time.

Upon activation, Salzmann explains, the pilot experiences immediate acceleration, allowing them to fly at speeds of more than 300km/h. For the maiden flight with the Electrified Wingsuit by BMW i Salzmann was flown by helicopter together with two other wingsuit pilots over the mountain tops of his Austrian homeland. Directly after the jump from an altitude of 3,000 metres, all three flew in formation in the direction of a mountain massif. 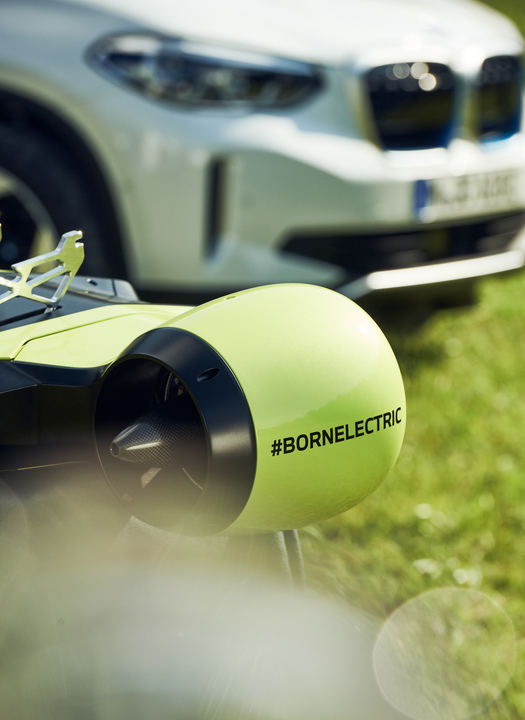 With the aid of the electric drive, Salzmann accelerated faster than his colleagues and was able to fly across the peak in steep flight. After flying a further curve, he met up with the other two pilots who had flown in glide flight around the mountain. The three wingsuit pilots finally opened their parachutes and landed at the agreed destination. 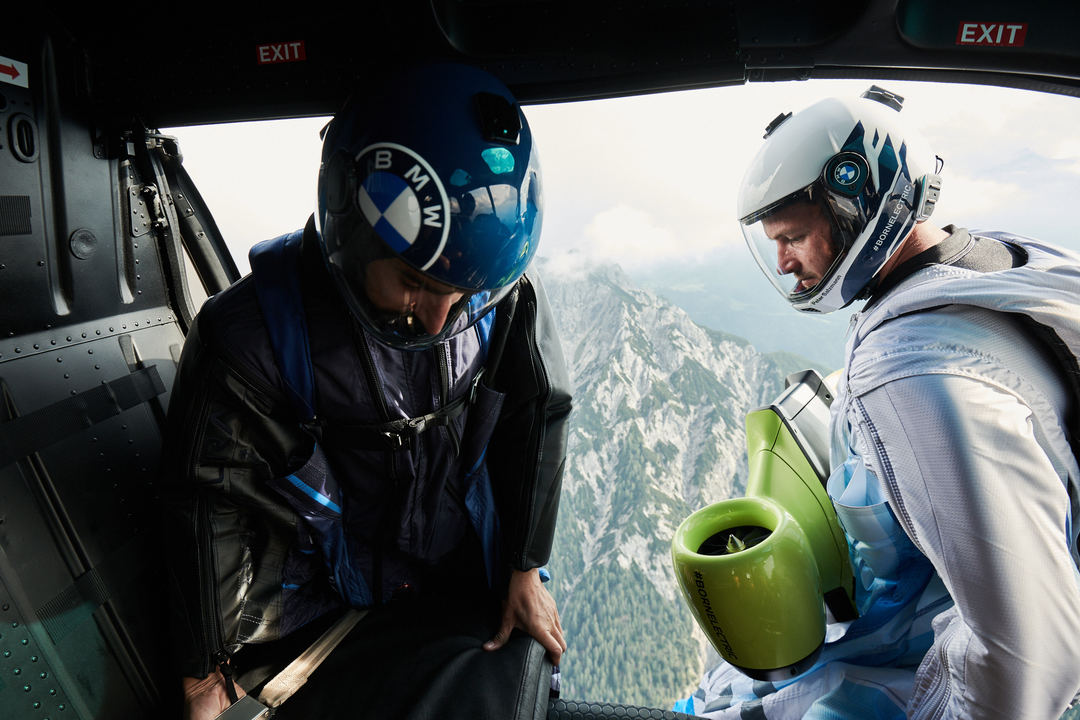 Electric mobility by BMW i is conquering the third dimension. Within the framework of the #NEXTGen 2020, the BMW Group will present the first electric drive system for a wingsuit with which the centuries-old dream of flying can be realised in a completely novel way. The innovative drive module and the likewise entirely newly designed wingsuit were developed in a cooperation between BMW i, Designworks and the professional wingsuit pilot Peter Salzmann from Austria. The fly unit of the Electrified Wingsuit by BMW i comprises two encased carbon propellers, so-called impellers, each delivering a power output of 7.5 W, a speed of around 25,000rpm and a total output of 15kW, which is available for approximately 5 minutes.

The result is an extremely powerful, compact and light drive and energy storage package for a unique flying experience with the Electrified Wingsuit by BMW i. 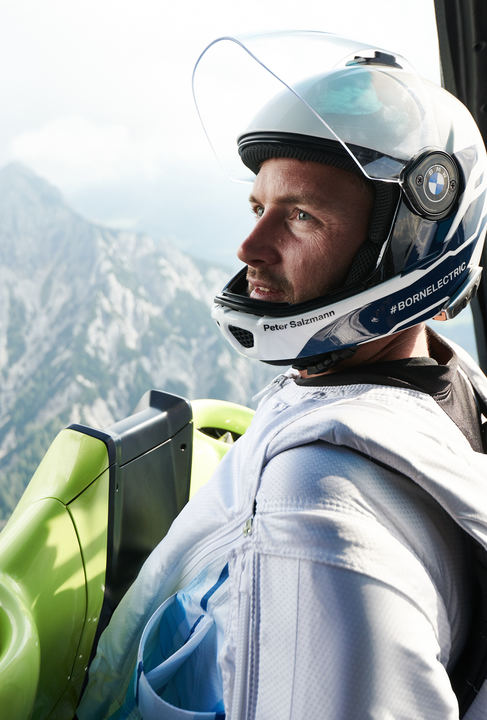 Salzmann’s maiden flight with the Electrified Wingsuit by BMW i was visually captured in an elaborately staged video documentation. The spectacular film, which will be seen for the first time in the run-up to the #NEXTGen 2020, shows impressively how BMW eDrive technology is able to make a lasting change to the individual mobility experience – not only on the road.

At the #NEXTGen 2020, the BMW Group will be showing in a variety of ways how the company is pressing ahead with the change in the global automotive sector. Initiatives and commitments will be presented, in which a close exchange with pacesetters from other sectors lead to new perspectives. In addition, the BMW Group will present the latest new products as well as innovative technological developments and vehicle concepts for the future of individual mobility. 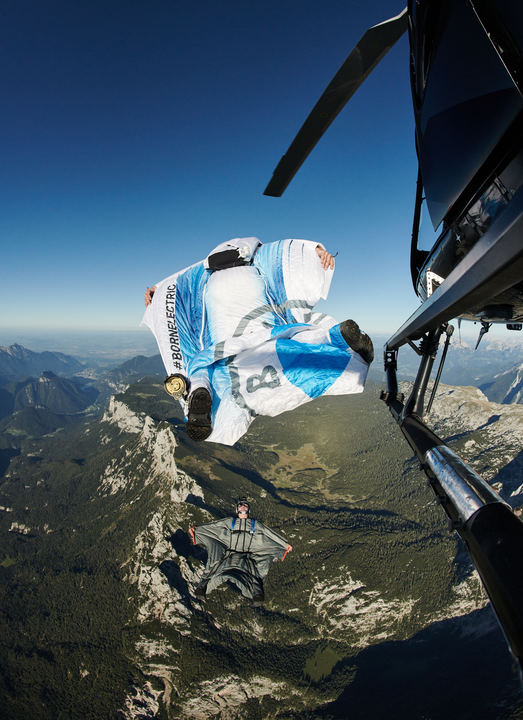 The main focus is on the technological field of electric mobility, in which the BMW Group with its development and production know-how and the largest choice of electrically powered drive systems is one of the world’s leading suppliers. Since the market launch of the all-electric BMW i3 (combined fuel consumption: 0.0 l/100km; combined power consumption: 13.1kWh/100km; combined CO2 emissions: 0g/km) in 2013, the components comprising electric motor, power electronics, charging technology and high-voltage batteries have undergone continued further development. The new BMW iX3 (combined fuel consumption: 0.0 l/100km; combined power consumption: 17.8 – 17.5kWh/100 km; combined CO2 emissions: 0g/km), features the meanwhile fifth generation of BMW eDrive technology, which is characterised by optimised energy efficiency and power density, as well as an exceptionally compact design.

The BMW Group subsidiary has strongly influenced the BMW i brand’s design from the outset, applying its creative capabilities not only in the automotive sector, but also on behalf of numerous international clients from other branches of industry. 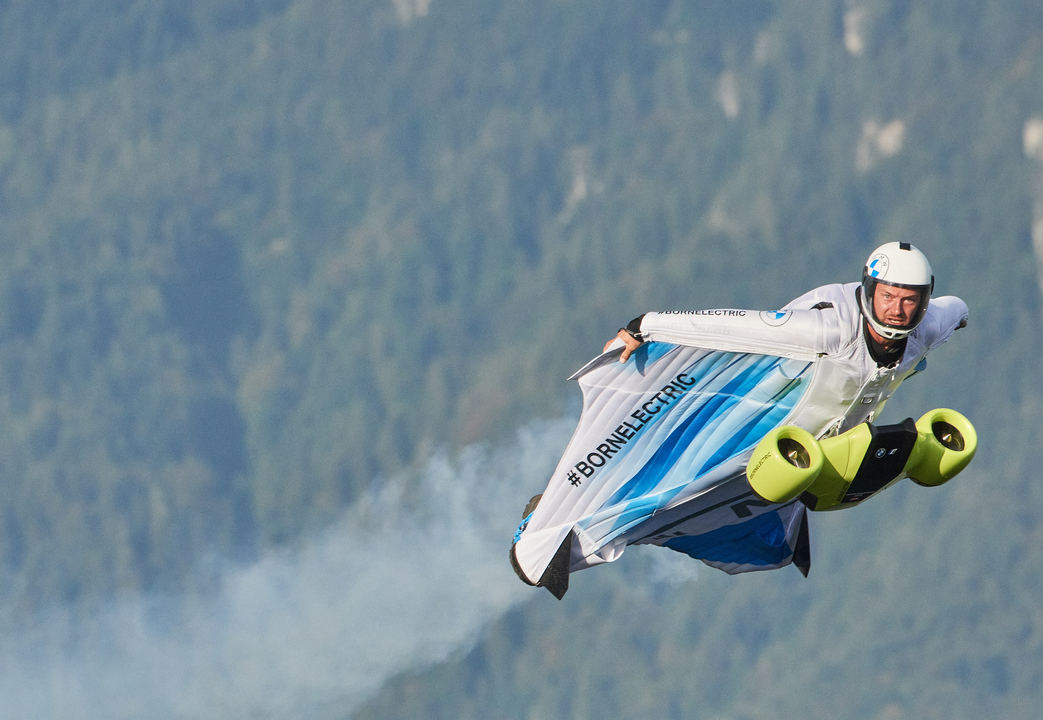 Around 3 years passed from the idea of a wingsuit flight with electric extra boost to the premiere in the Austrian alps. During this time, the air sports pioneer Peter Salzmann and his partners at BMW i and Designworks worked jointly on the details of the suit and the drive system. The electric twin-propeller drive system including an energy storage unit were perfectly integrated into the front of the wing suit. The tests in the wind tunnel at the BMW Group Aerodynamics Testing Centre in Munich were a significant part of the development programme for the project. 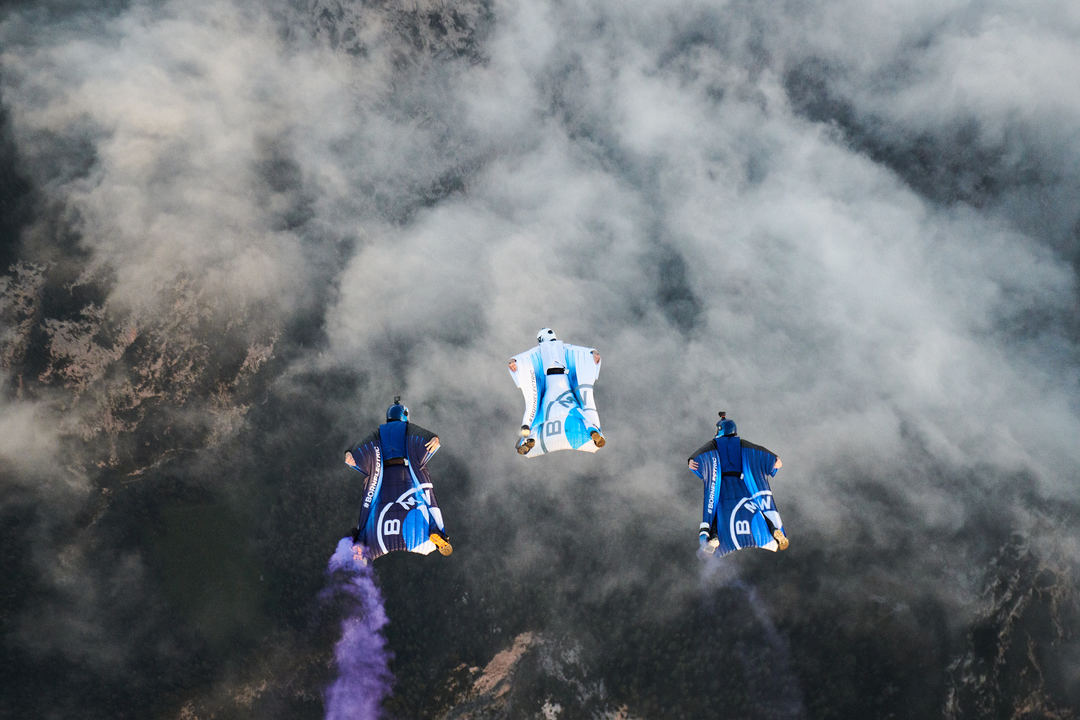 The project Electrified Wingsuit by BMW i was triggered by Peter Salzmann’s aspiration to raise wingsuit sport to a new level. The 33-year-old Austrian is a skydiving instructor and has meanwhile also made base jumping and skydiving his profession. In addition to skydiving training and wingsuit flying, his repertoire includes film stunts and show appearances. When jumping from cliffs or out of an aircraft, Salzmann uses the textile layer stretched between the arms and legs of his wingsuit as a paraglider that allows him to generate a horizontal flight movement from the fall velocity and the airflow. With each metre of descent, up to three metres of horizontal flight can be achieved. Wingsuit skydivers can reach speeds of more than 100km/h. 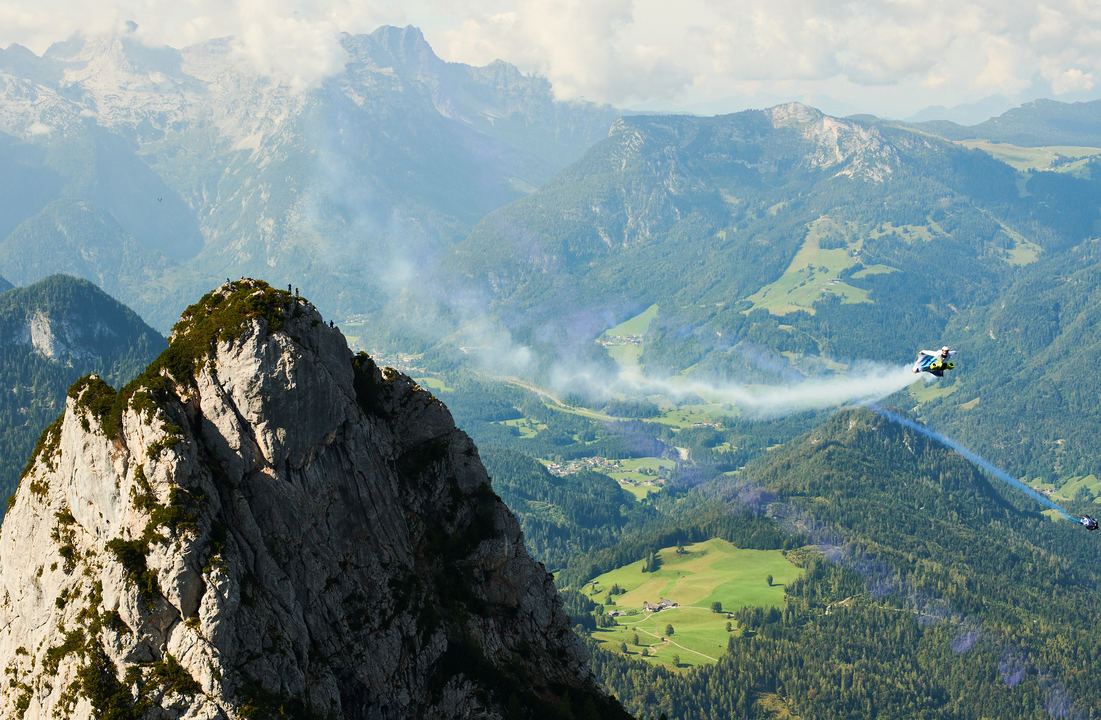 The aim of the electric drive system is to increase the performance of the wingsuit in order to achieve a better constant glide flight, thus allowing longer distances to be covered. 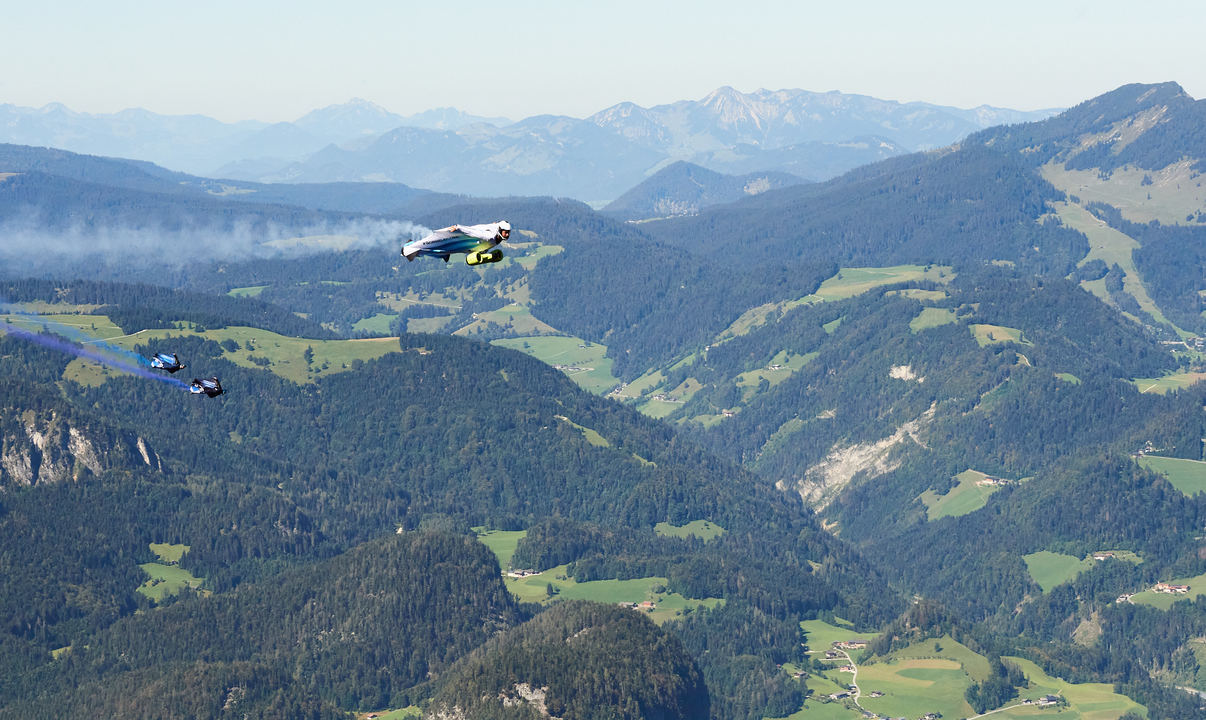 Following the successful premiere, Peter Salzmann and the experts at BMW i and Designworks continued their development work on the world’s first electrically powered wingsuit. The Austrian is firmly convinced that electric drive technology will shape the future, not only on the road but also in the air. To him, the project Electrified Wingsuit by BMW i demonstrates perfectly which previously undreamt-of possibilities can become reality with the help of electric mobility.

Fuel consumption, CO2 emission figures, power consumption and electric range were measured using the methods required according to Regulation VO (EC) 2007/715 as amended. The figures are calculated using a vehicle fitted with basic equipment in Germany, the ranges stated take into account differences in selected wheel and tyre sizes as well as the optional equipment. They may change during configuration. 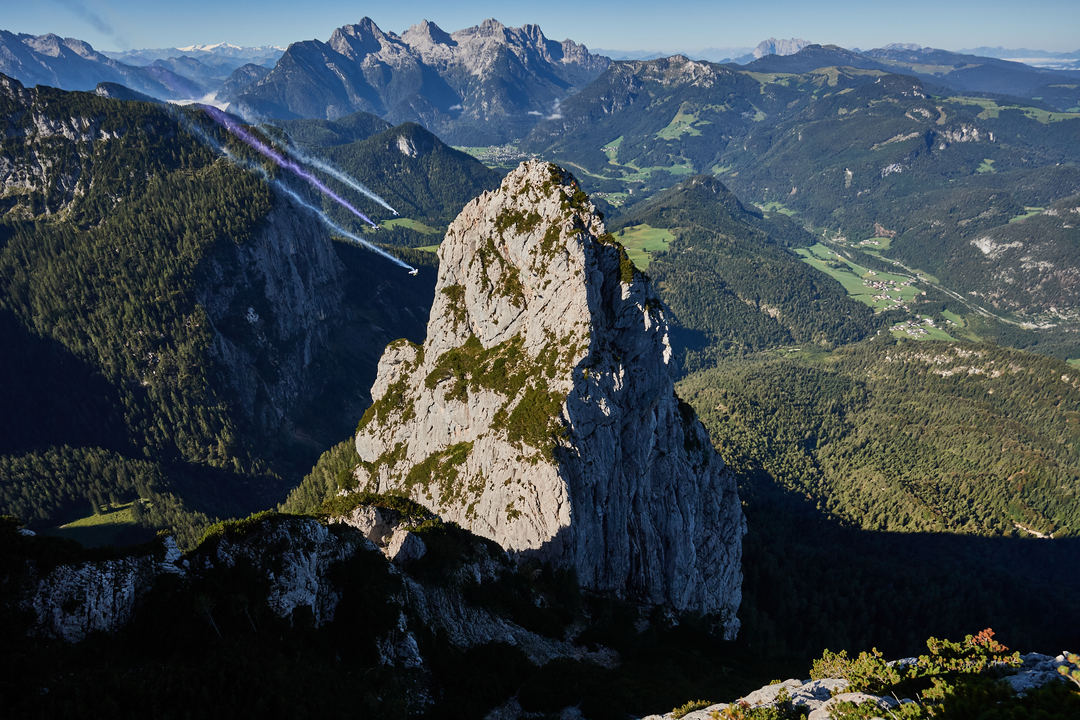 The figures have already been calculated based on the new WLTP test cycle and adapted to NEDC for comparison purposes. In these vehicles, different figures than those published here may apply for the assessment of taxes and other vehicle-related duties which are (also) based on CO2 emissions.

With its four brands BMW, MINI, Rolls-Royce and BMW Motorrad, the BMW Group is the world’s leading premium manufacturer of automobiles and motorcycles and also provides premium financial and mobility services. The BMW Group production network comprises 31 production and assembly facilities in 15 countries; the company has a global sales network in more than 140 countries.

The success of the BMW Group has always been based on long-term thinking and responsible action. The company has therefore established ecological and social sustainability throughout the value chain, comprehensive product responsibility and a clear commitment to conserving resources as an integral part of its strategy.