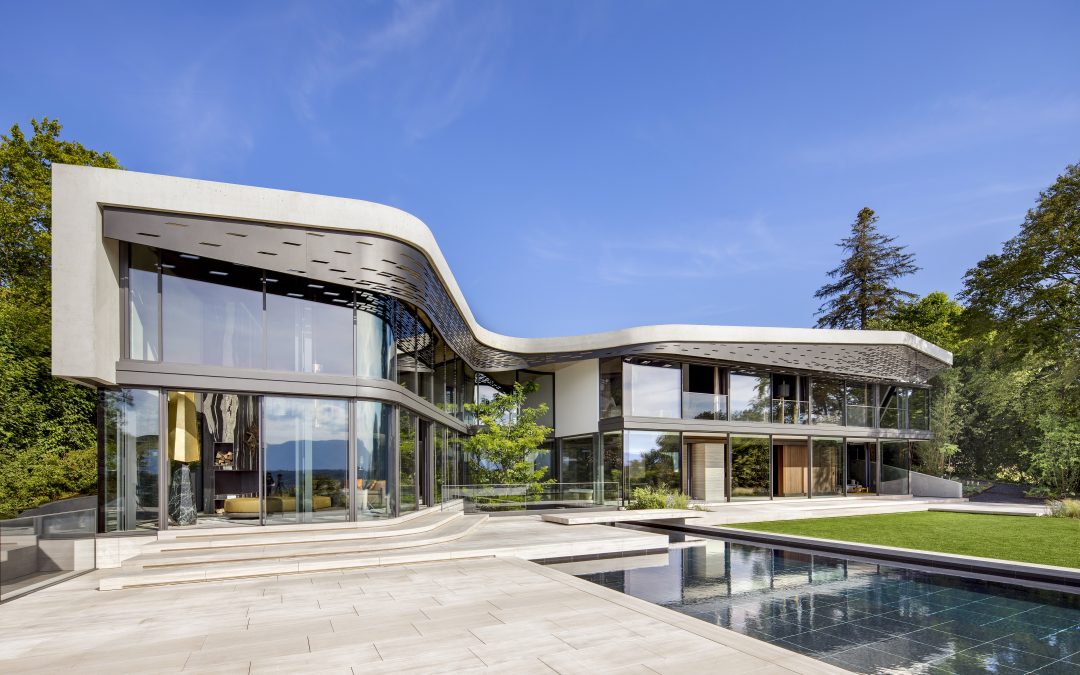 By at the the same time blending in and standing out this project testifies to a rare dexterity and achieves a statement-making tribute to both its spectacular lakeside setting and to the many hands that made it. Just as its alpine setting has been formed by many forces over time, Villa Courbe is an intuitively shaped residence, iteratively by many hands – from sun and topography to brief and local zoning regulations. Seen from the water, the house appears almost at one with the wooded hills that rise gently out of the lake and yet very different to the traditional suburbia that surrounds it. The concept responds to the earlier topography and drives the design to contrast with the neighbouring houses that appeared only after the glaciers and ice had done their work. 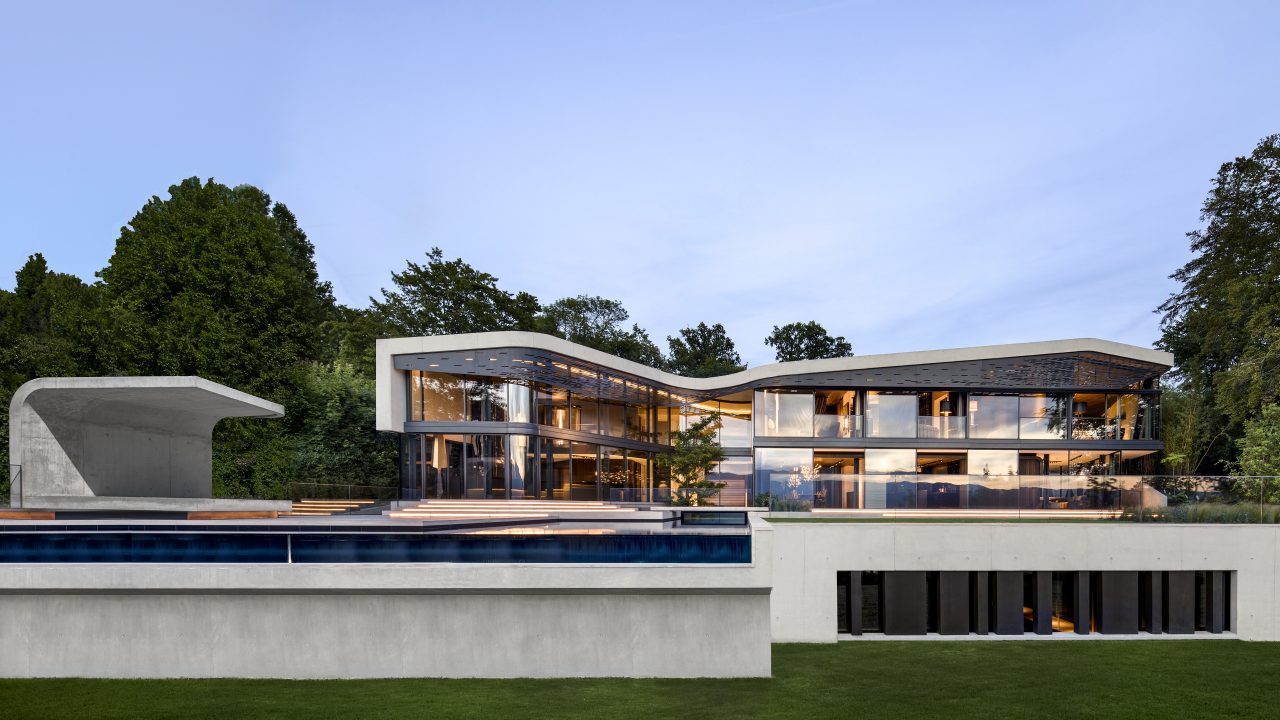 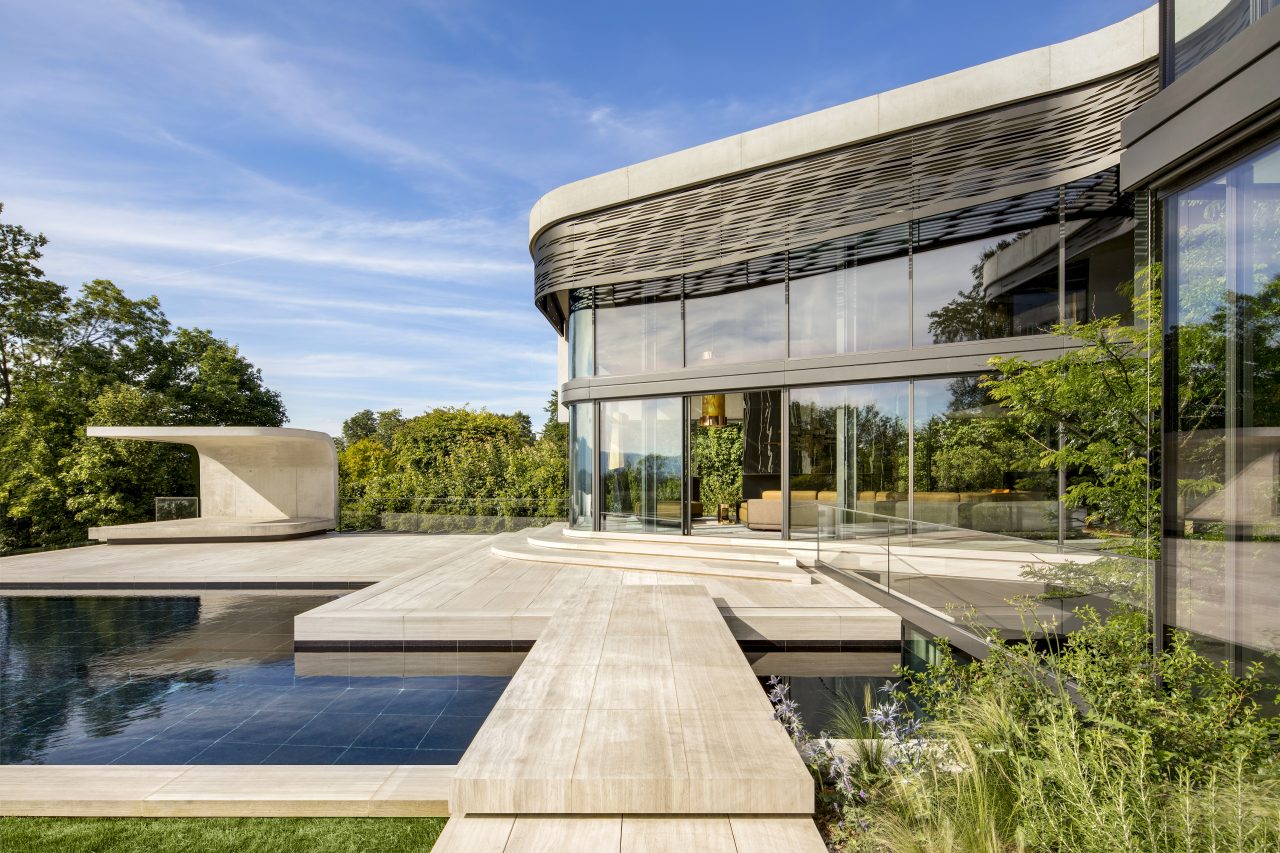 Entering the property from the street, the design negotiates the lakeside slope in a series of full width ‘slices’ that contours across the wedge-shaped site. The first of these is a triple-storey light scoop that houses a gallery space and creates a threshold to the more private parts of the house beyond. Responding to a critical requirement of the brief, guests can circulate vertically down to a top-lit basement art space which opens up into an entertainment area. Functionally separated in the “slice” closest to the lake, the principle living rooms are on the ground floor – a sequence of dining, kitchen and family rooms are sheltered below an upper storey housing the bedrooms, whilst a double-height living room noses towards the lake, creating shelter from the cold north wind. 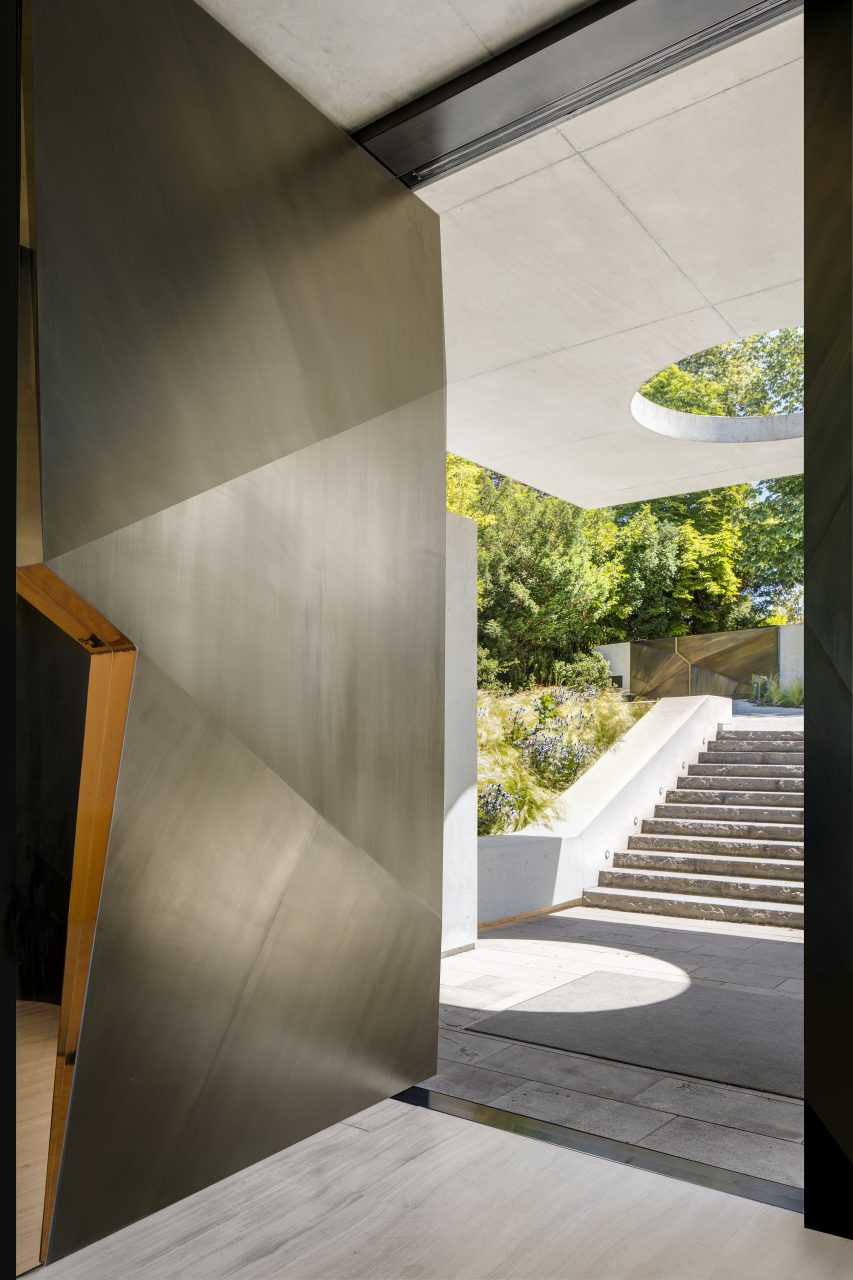 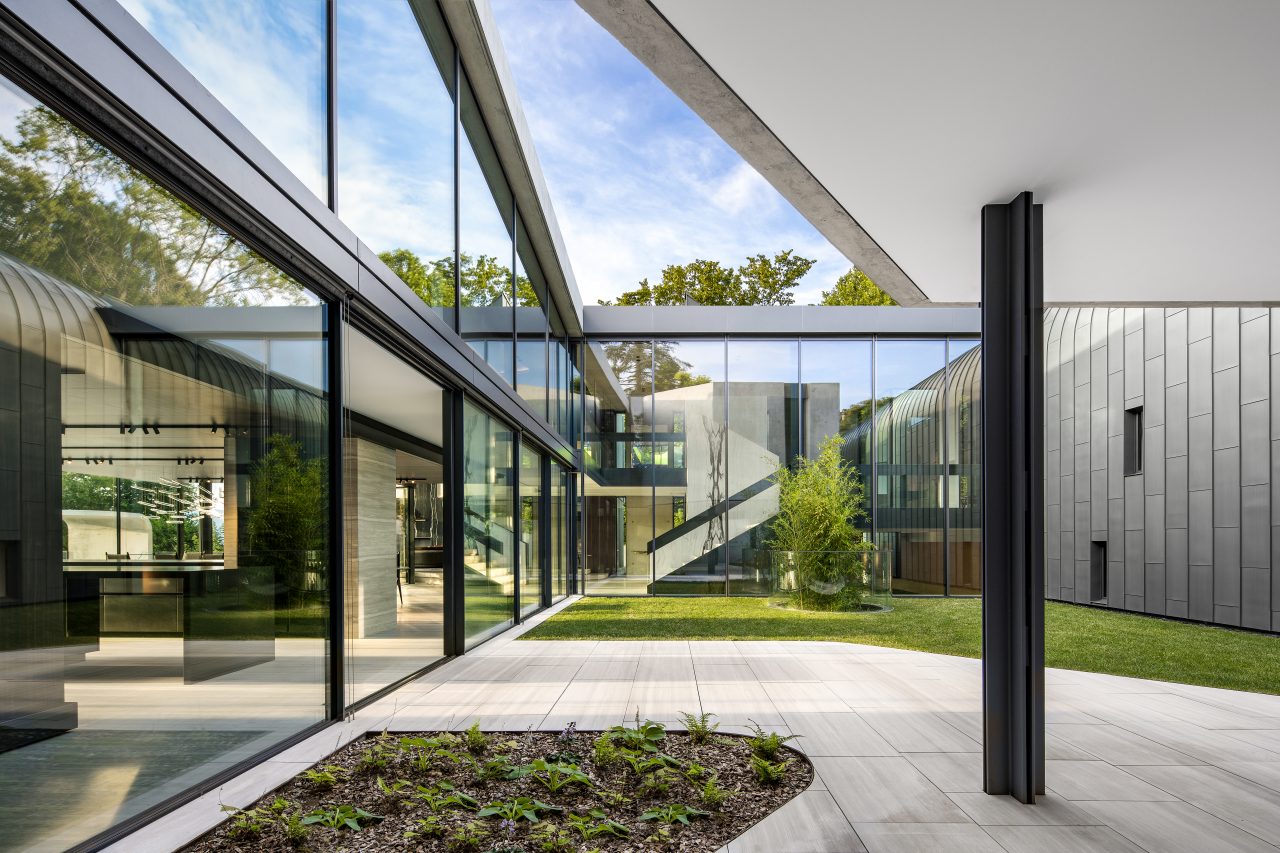 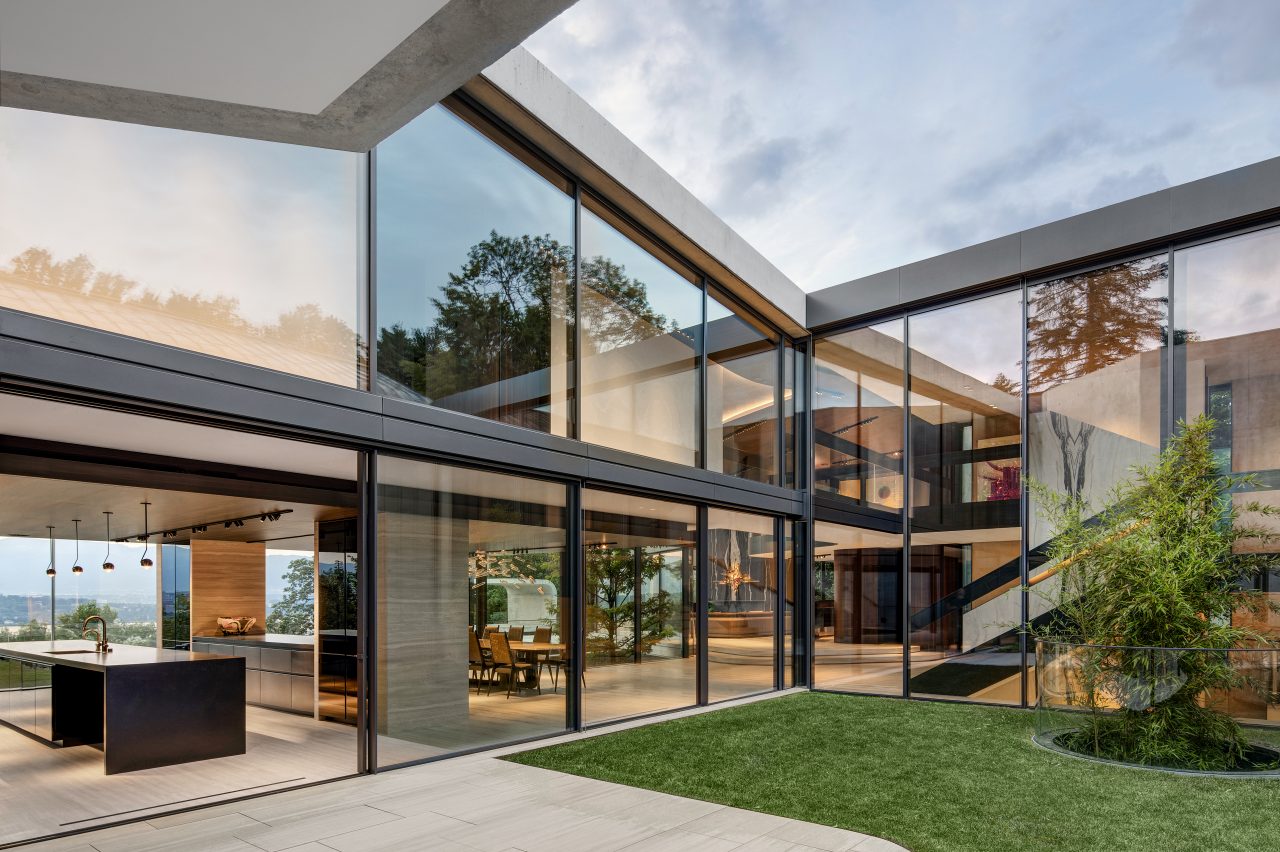 Entry is on a mid-level below a suspended canopy that further parts the slices into two wings and, in doing so, opens up a view across the lake to the mountains beyond. Swooping down between these wings, a sculptural planted roof both echoes a distinctive fold in the distant alpine skyline and responds to prescriptions in the local zoning scheme. 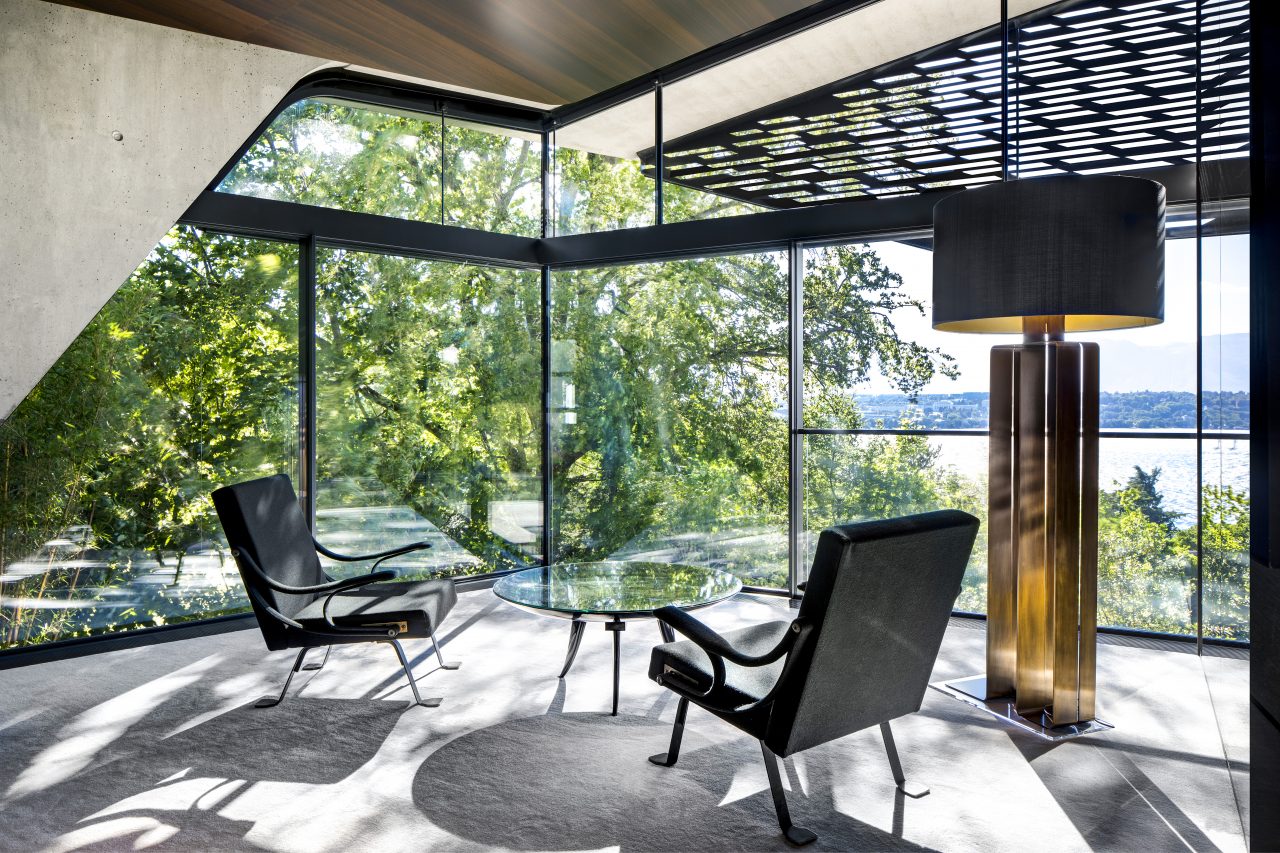 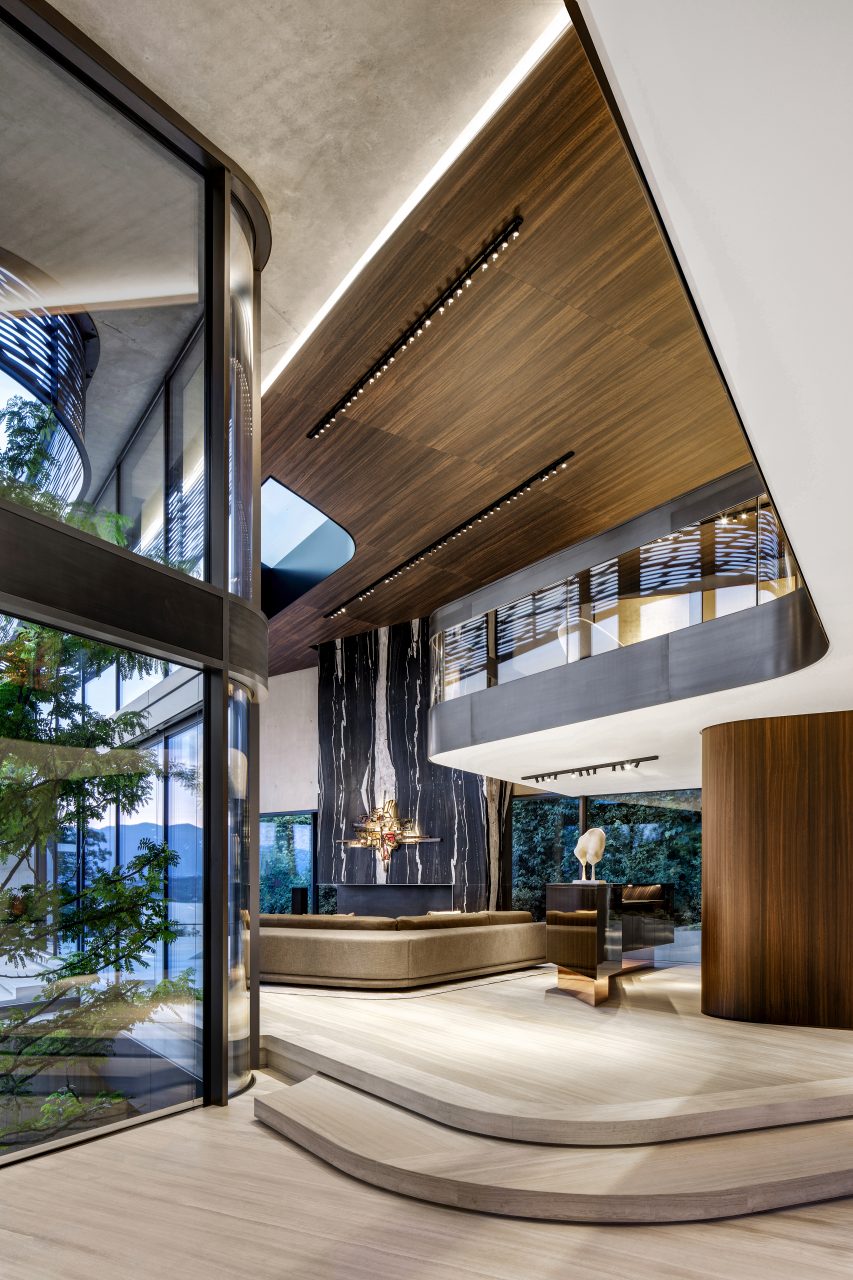 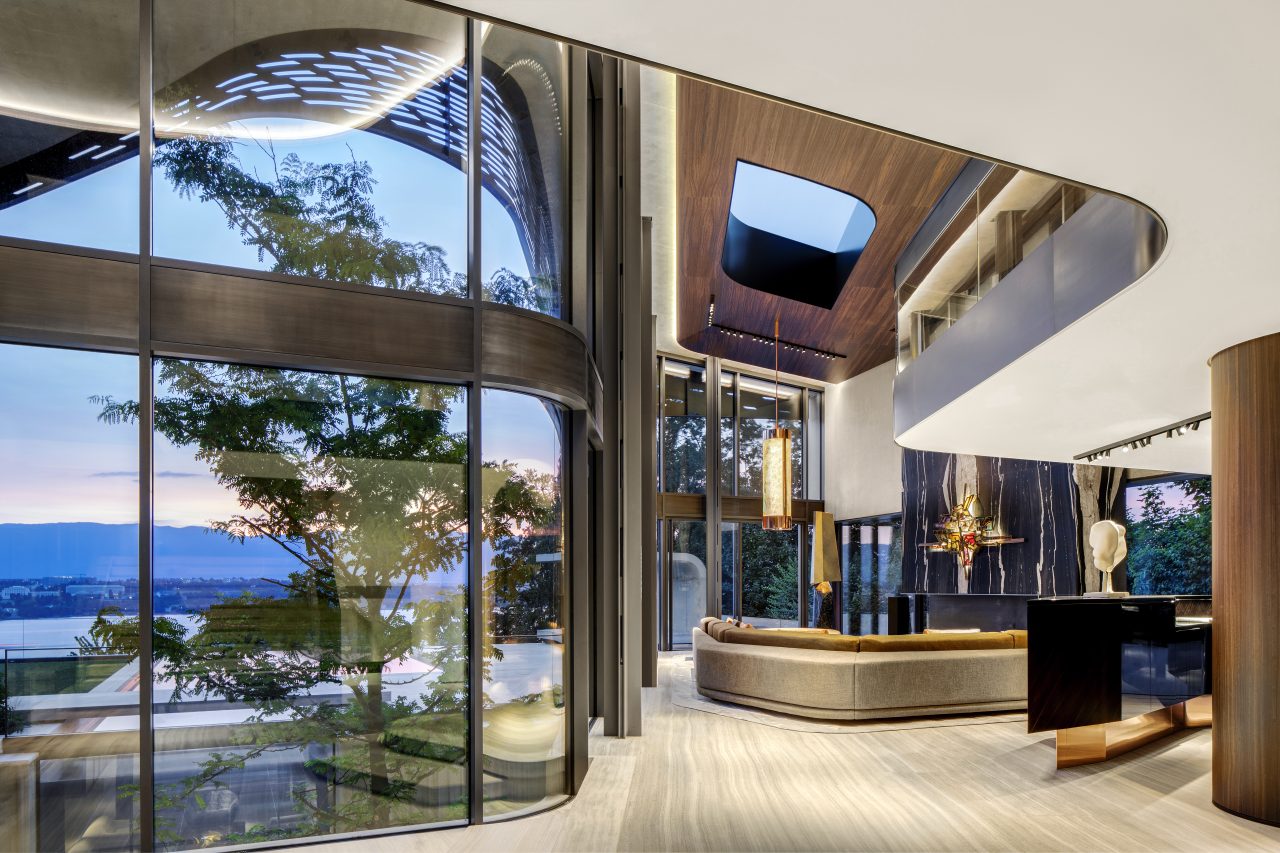 As fundamental as the sharp peaks and soft hills that characterise the views from the plot, sunlight, that precious commodity on the 46th parallel (a circle of latitude that is 46 degrees north of the Earth’s equatorial plane crossing Europe, Asia, the Pacific Ocean, North America, and the Atlantic Ocean), is the other guiding hand which shapes the spaces and sculpts the forms. The site responds to its north-west orientation, and every effort was made to bring south light into the house. Carving the programme into parallel ‘slices’ exposes two south elevations. 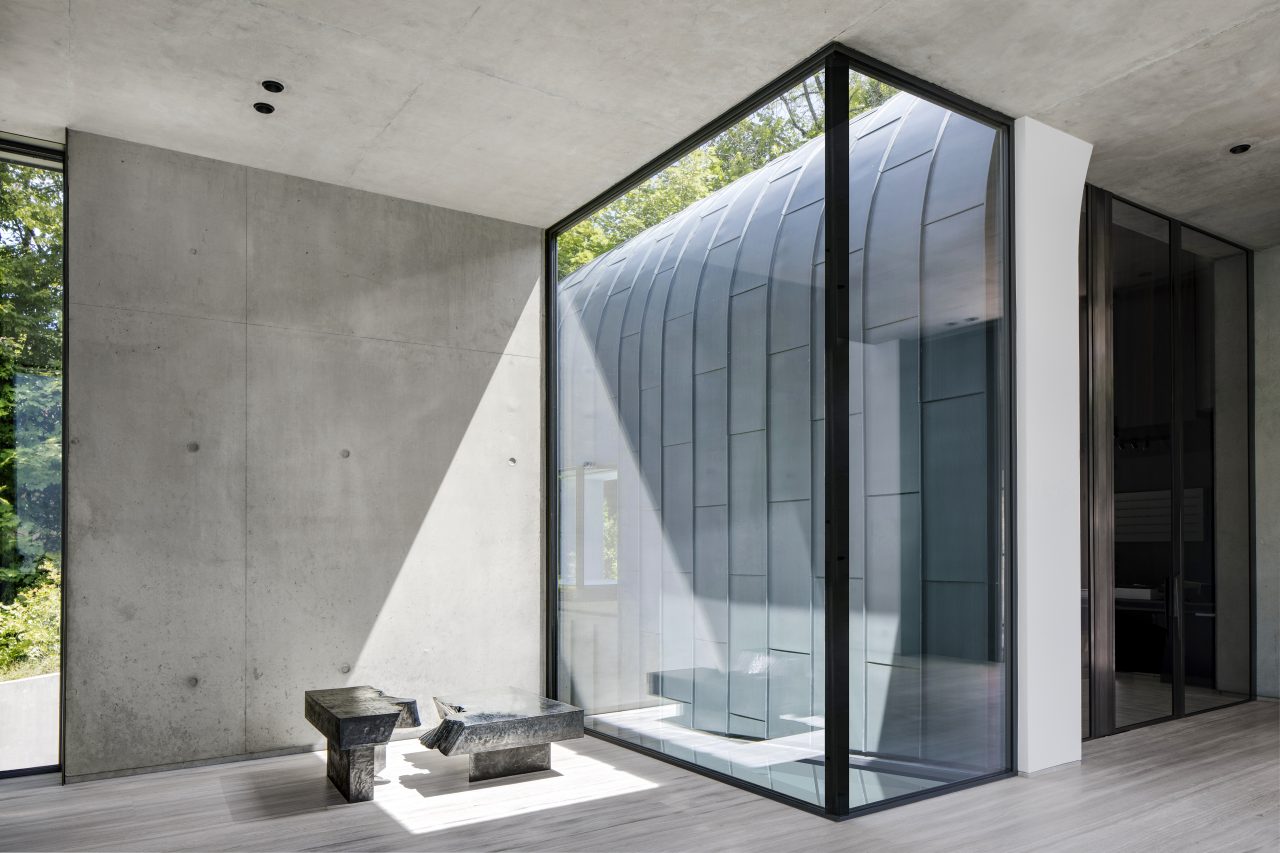 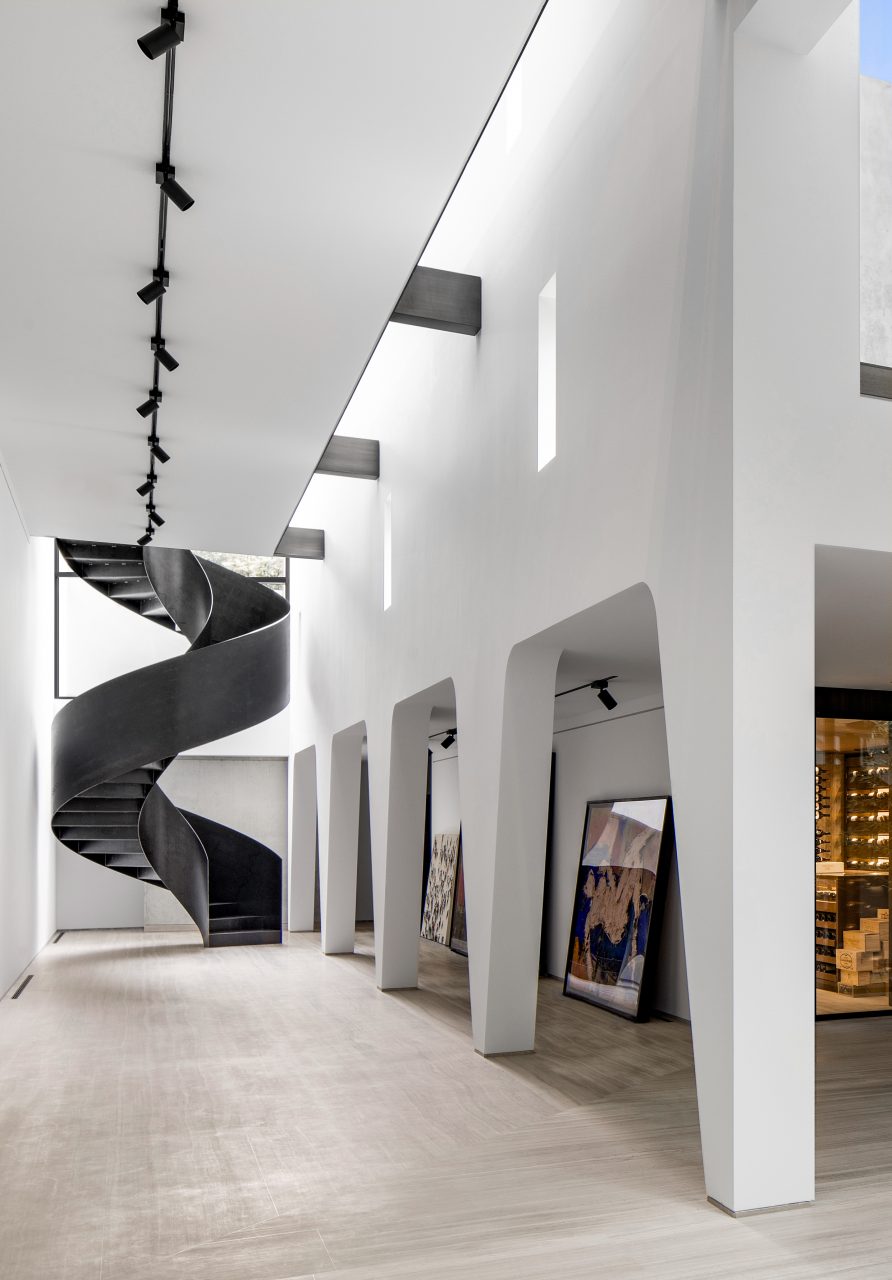 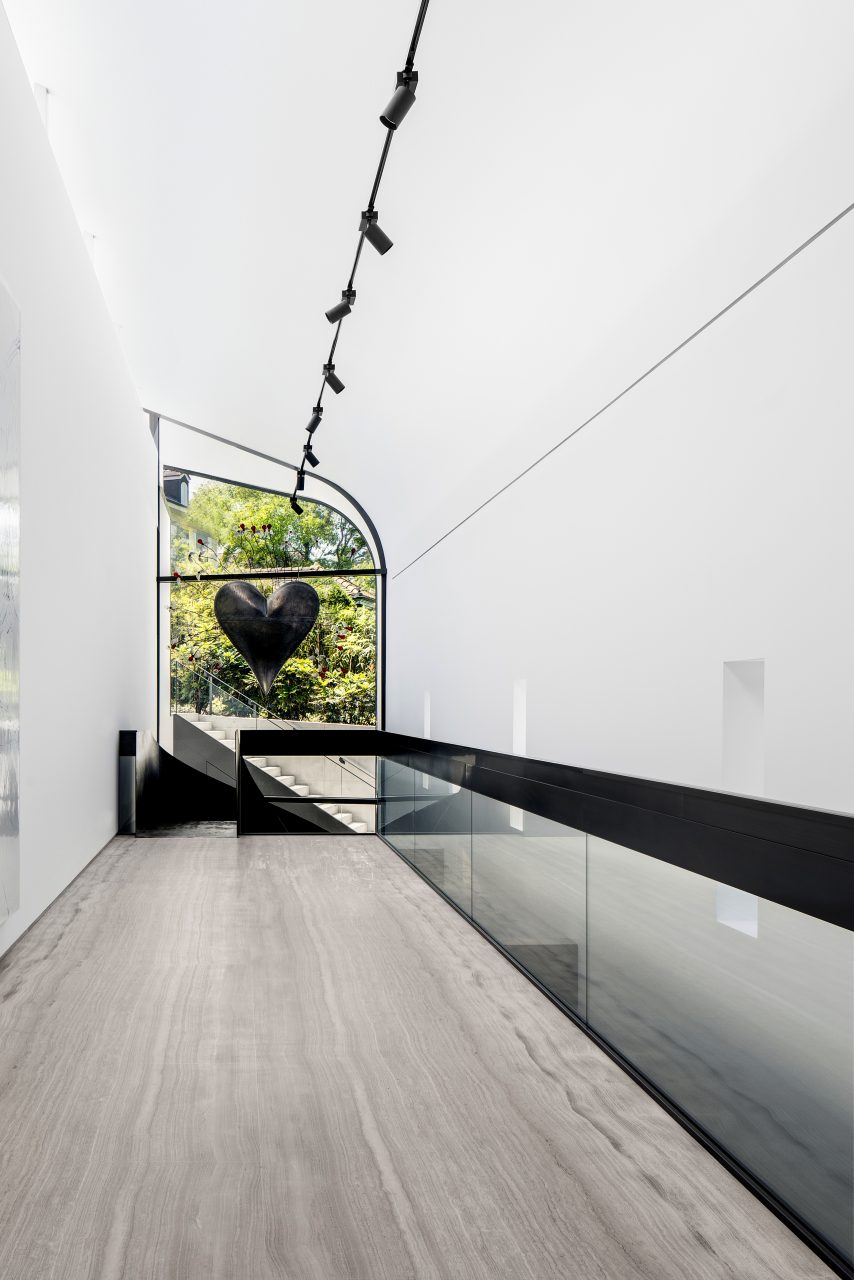 The first of these – at the entrance – is largely closed up with zinc cladding to provide privacy, but high-level clerestory windows scoop art-friendly light deep into the basement gallery. The fissure between the slices creates a generous and private south-facing courtyard in the centre of the plan and this, in turn, has a lightwell cored out into the basement below. The roof is punctured with strategically placed skylights whilst the impact of the summer sun is moderated by a laser-cut aluminium shading screen that follows the curves of the roof and plan and provides a datum for glazing and window treatment. The pool is also used as a sort of lightbox with a glass wall bouncing light into the basement. The result is a series of luminous spaces characterised by varying types of light – from soft art-friendly illumination that filters down the basement gallery to the generous daylighting that suffuses the principle living spaces. 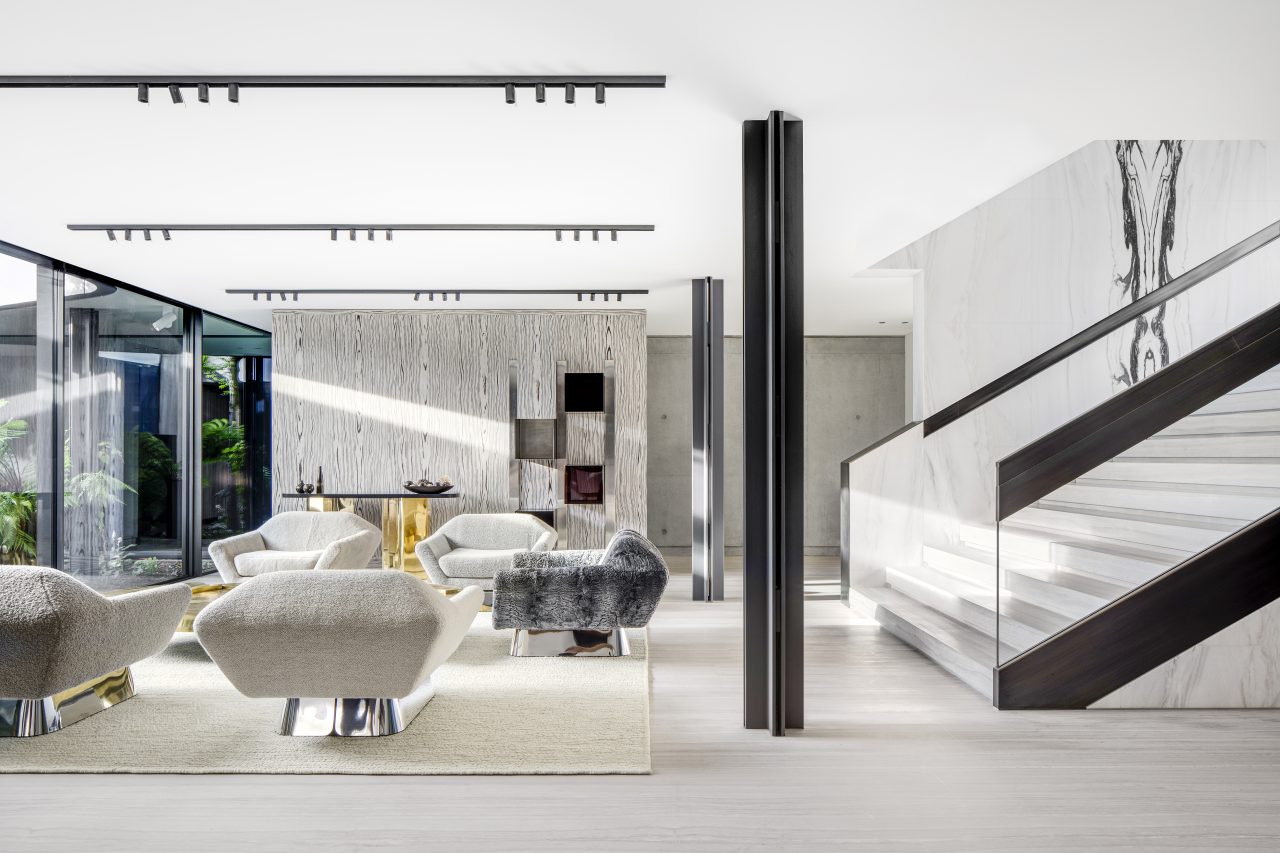 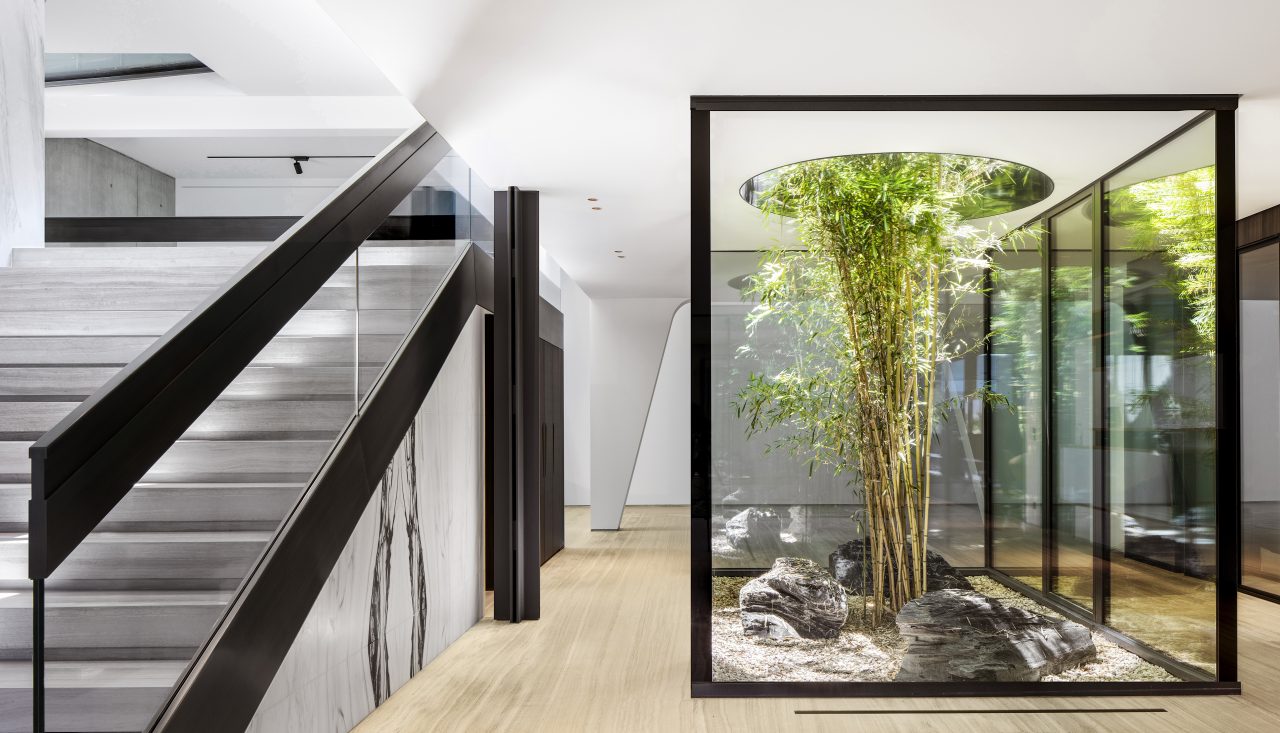 Materials were chosen to respond to these bright spaces. Zinc-clad on the outside, the entrance appears robust and opaque; whilst within the deep light scoop, the basement areas are lined with white walls and ceilings. In the main living spaces, rich timber ceilings and natural stone walls combine to add warmth and texture. Black marble shot through with white veins, and limestone layered in horizontal bands, echo snow-clad peaks and sedimentary rocks, whilst front door and gates open up in Bond-like copper-clad clockwork. Concrete is also used in a variety of ways – from heavy board-formed panels in the entrance hall, to the monolithic curve of the pool cabana, to the curtain-like walls of the basement pool and spa which were cast using a proprietary elastic mould system. Triple glazing (some of it curved), solar water heating, geothermal heat pumps and an insulated, planted roof combine unobtrusively to raise the performance of the house to a level suited to its environment. 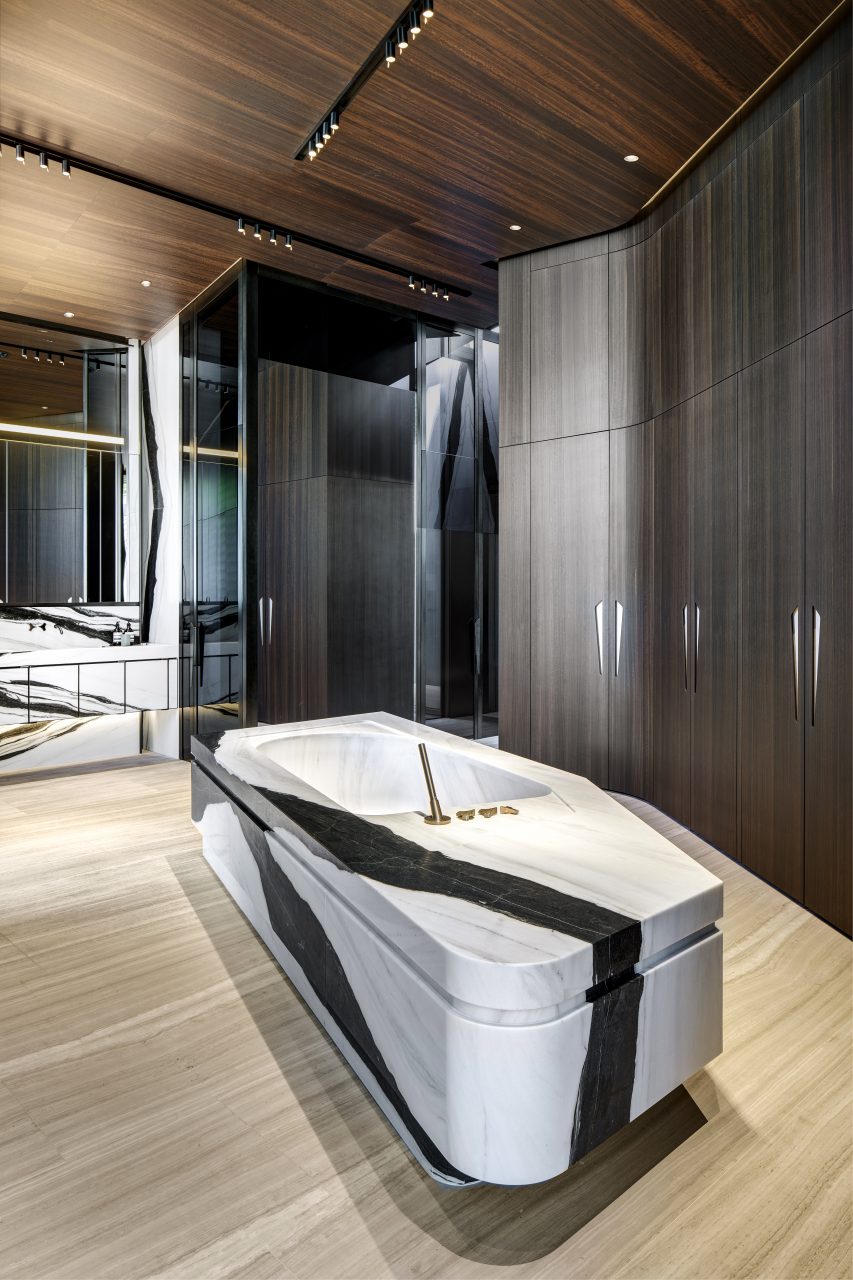 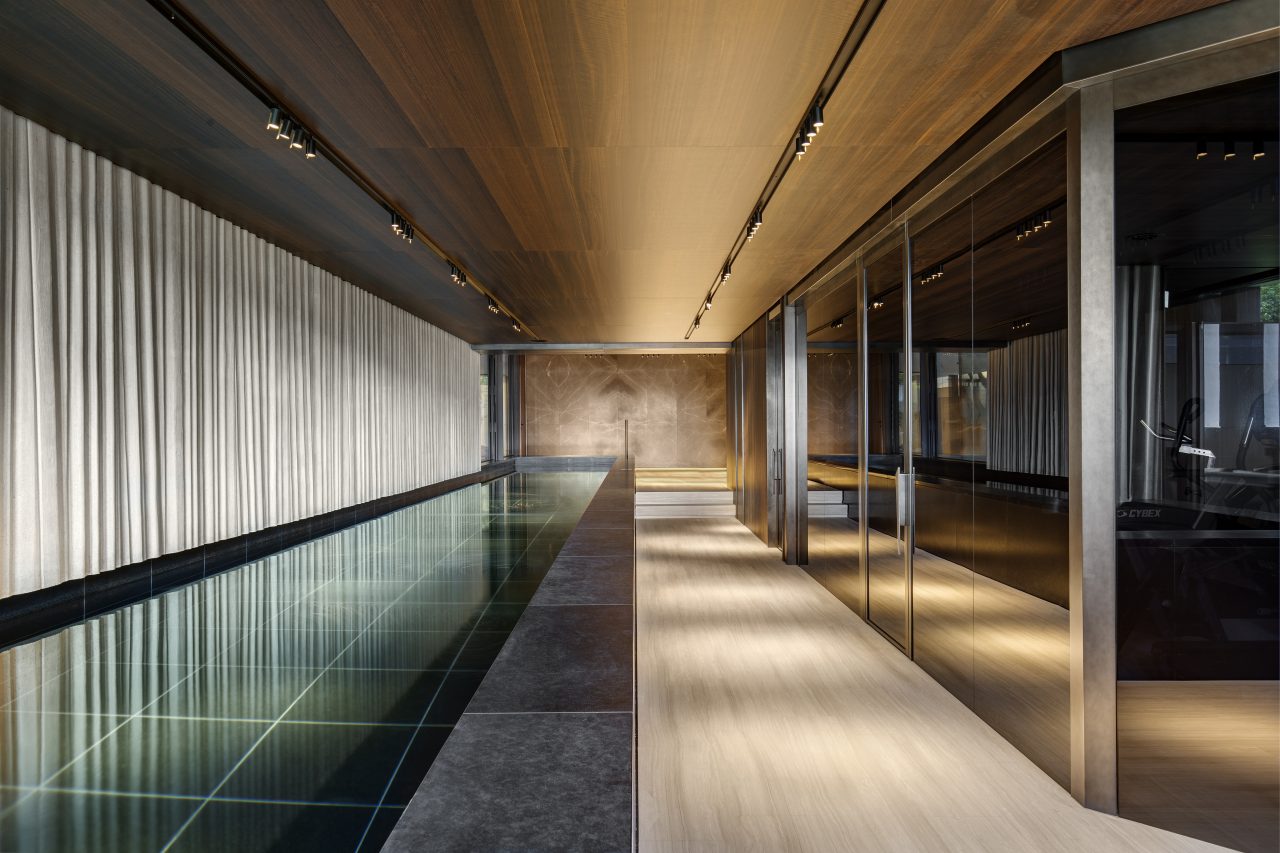