Fishermen, Beach and Iron Kite Houses on the Cape Coast Inform the Lightness of this 2007 Holiday Home

This holiday home, featured in habitat magazine more than a dozen years back, is located on a subdivision from the front garden of the established house on the upper side. Interpreting the local vernacular resulted in barn-shaped buildings as the most appropriate response to the site. An upper ‘barn’ extends from an existing garage with a lower ‘barn’ forming a protected courtyard between. These long buildings step down the slope with the sea-facing ‘barn’ slightly elevated above the ground to provide a measure of privacy. 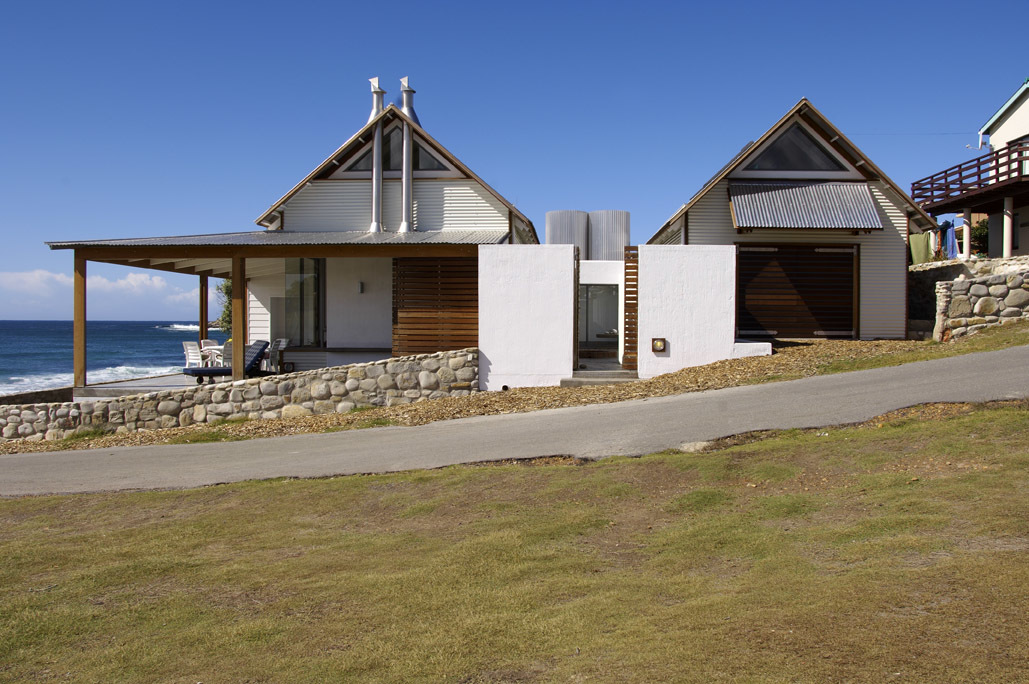 The existing low stone perimeter wall and garage were incorporated into the design of the new structure. Corrugated building materials provide a modern recognition with local corrugated iron structures. They further serve to lighten the placement of the building on the ground, while the corrugations break the reflectivity of the walls; roofs will eventually tarnish and weather to a dull grey.

The architect recalls: ‘The clients lived in Johannesburg and the site is in a highly visible position on the main village green, next to the slipway and is virtually on the beach; there were obvious concerns about the lack of privacy and the noise. One of them wanted a house next to the sea. A prerequisite was an element of privacy and for her being able to see the ocean whilst cooking. The other wanted a wind-free area in which to barbecue, yet also be able to see the sea. The house had to accommodate three growing children and be able to provide them with a ‘teen pad’ in which to relax and socialise, even in bad weather; grandparents would visit from time to time. The client is a perfectionist yet hates housework and the design of the house had to accommodate this fact.The existing structure was utilised successfully i.e. the garage was altered to incorporate a playroom in its roof space.’ 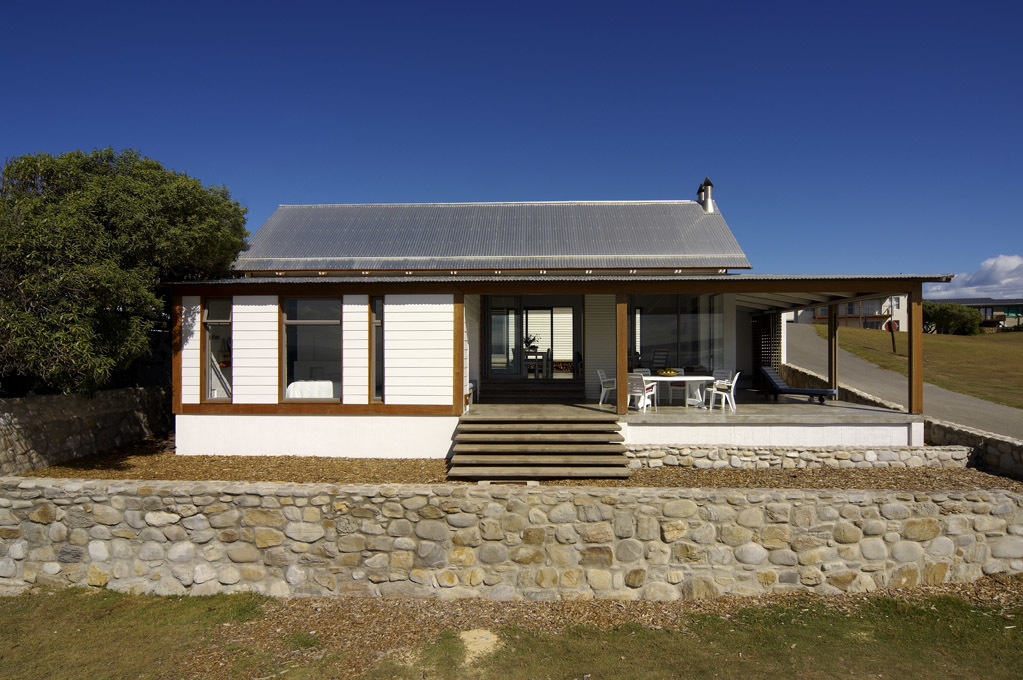 The architects had a responsibility to design a house that was appropriate to the area and sensitive to its surroundings. A careful study of the local vernacular – houses of the fishermen, the lagoon houses of Stilbaai and the older houses at Cape Infanta – was undertaken. Due to the orientation of the site, the privacy issues and the strong prevailing winds, a courtyard house was the best option. 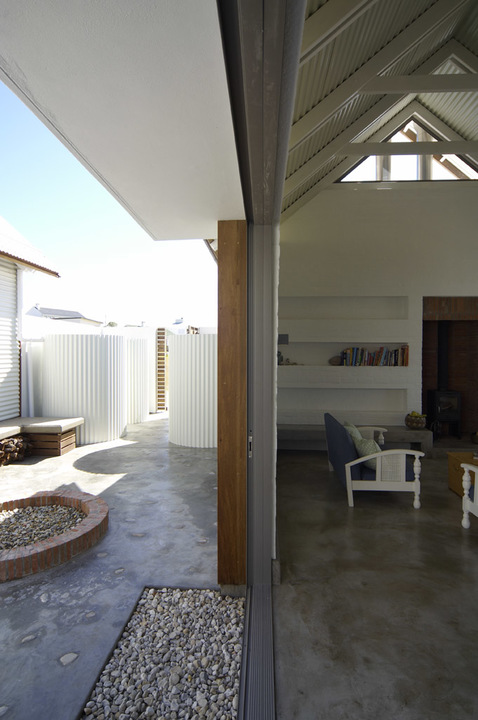 The architects travelled extensively measuring and studying the fishermen’s houses of the Cape’s coast, in particular the regional architecture and the beach houses of Stilbaai. Correct in their scale and climatic response, these houses form a delicate grouping along the river mouth. The local corrugated iron kite houses, imported to the area by the first missionaries, also informed the design. 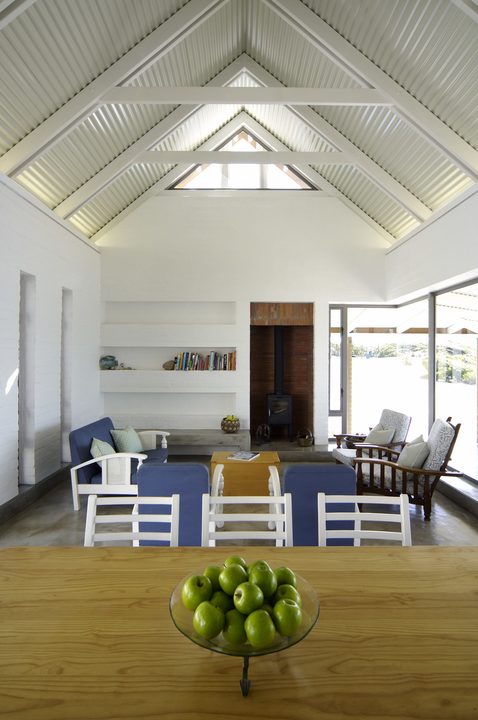 Water provision was a crucial consideration. Rather than hiding the rainwater tanks, these have become a celebrated feature both on top of the linking structure and in the central courtyard. The final plan was a natural solution to the problems and incorporated the existing building on the site, to form the upper side of the courtyard. 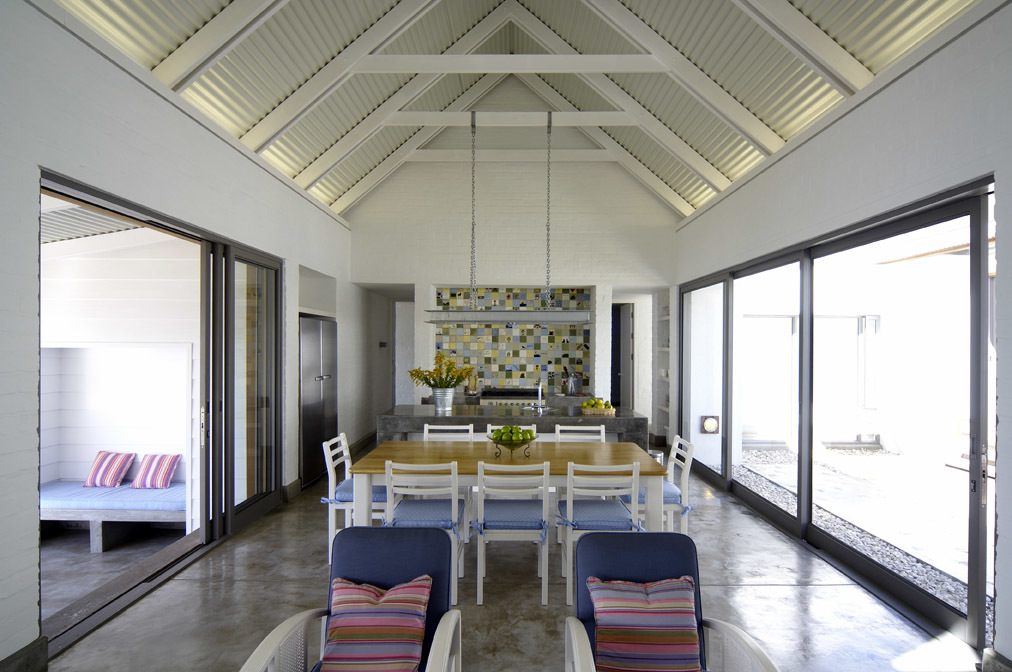 Designed as two pavilions linked in the middle, the structure has a sunny, wind-protected courtyard incorporating two existing trees (later lost) at its centre. The front pavilion is reminiscent of the local vernacular with a simple double pitched roof for the main living areas of the house and a verandah and bedroom.

The two pavilions are linked by a flat-roof breezeway and two children’s bedrooms, which open onto the courtyard. During windy days the courtyard doors are opened to provide a sheltered area and above this area of flat roof are two water tanks.

A veranda is wrapped around the house to obtain the best possible overview of the Breede River mouth, set at 45 degrees from the corner of the plot. This veranda is elevated above the road level and its combination of height and sliding shutters provides privacy when necessary. The lounge / dining area is one large open-plan space with feature roof trusses. Here, a combination of sliding doors and shutters opens the area up to the view, from the internal courtyard to the sea, as desired by the clients. The main bedroom also has magnificent vistas of the ocean. 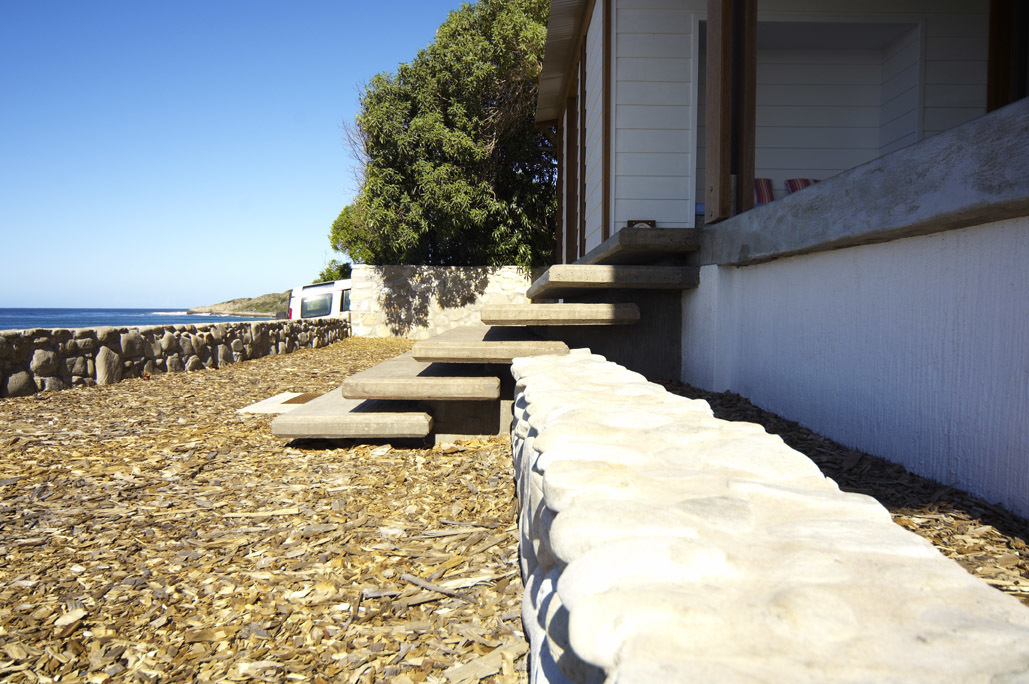 Says the architect: ‘Traditional proportioning systems were employed, whilst rendering and detailing the house in a contemporary way using modern materials. However, the technology used had to be simple as the house is located far from any major centre, the bulk of the building materials were obtained from the local farmers co-op. Examples are the balustrades, hooks and cat ladders, made by the builder using 12mm galvanised rod simply bent on a jig.

‘The entire project ran smoothly from start to finish and the house was within budget and finished ahead of time. The success here lies in a vital synergy: a visionary client and an accomplished builder with a good aesthetic eye, plus an ex- tremely competent and talented professional team.’

A wrap-around balcony features movable sliding screens providing privacy when required. These screens further serve to break the thrust of the wind and successfully render the front veranda, usable on windy days. 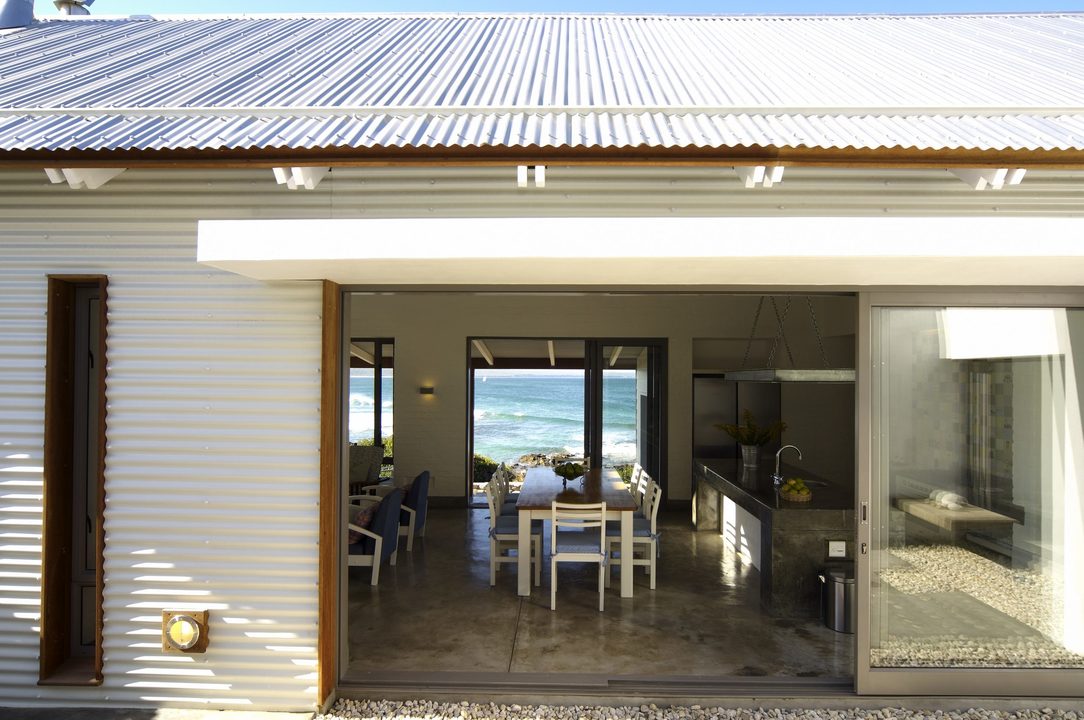 Michele Sandilands translated the local vernacular into simple rectilinear buildings with lean-to additions and finished them in the tones of beach and sea. Problems became features, like the lack of water in this region, which dictated the collection of rainwater and its storage, revealed as an integral part of the design.

Her personal prerequisite – as with all her projects – was to create structures that ‘rest lightly on the ground’. She adds: ‘We want our houses to weather well with time and not be noticeable for extravagance or ostentation, but rather for beauty in the detail, a gentleness of touch and an appropriateness of form.’