Rewiring Neural Pathways & Investigating the Experiential Nature of the Mystical, the Knowable, & Unknowable 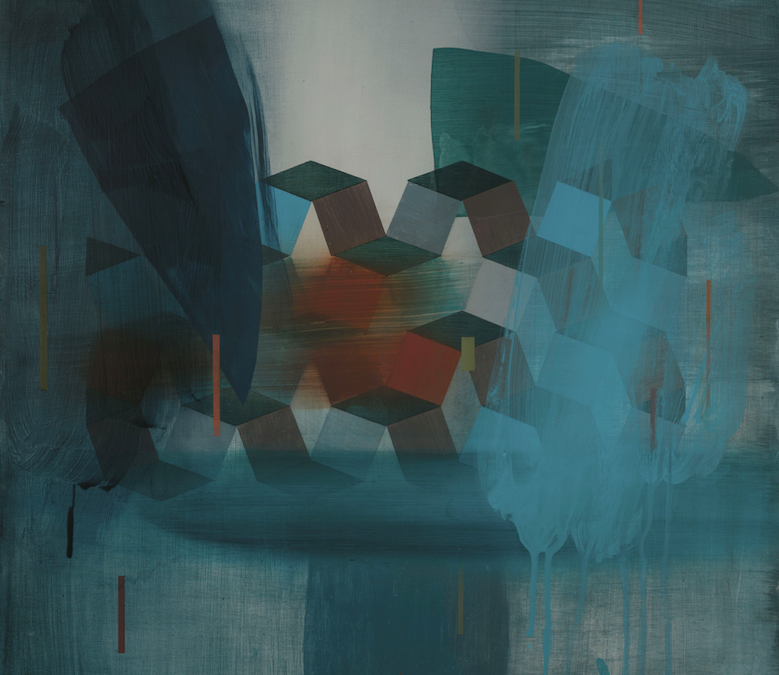 Nicholas Hales is a contemporary artist living in Cape Town, South Africa who works across a number of disciplines, including painting, drawing and video/film. He says: ‘When I was 28, I got a chronic illness and I started to meditate for no other reason as I thought it might help with my health. That led to the discovery of an infinite internal landscape, which I could explore. This has fuelled much of my work since.’

About his recent series of works titled Alchemy, the artist explains: ‘Alchemy is traditionally known as the attempt to purify, mature, and perfect certain ‘base metals’ into ‘noble metals’, particularly gold. A lesser-known alchemy was an internal alchemy, where the individual would undergo certain practices to bring about a change or evolution in one’s consciousness.

‘Meditation and ‘mindfulness’ are now part of the contemporary zeitgeist. No longer the domain of spiritual, mystical, or religious traditions, you can find the meditation and ‘mindfulness’ niche across several Apps for greater wellbeing and happiness. From CEOs to sportsmen and even military personnel, many are using these practices to reach peak performance or high functional efficiency in their professions. 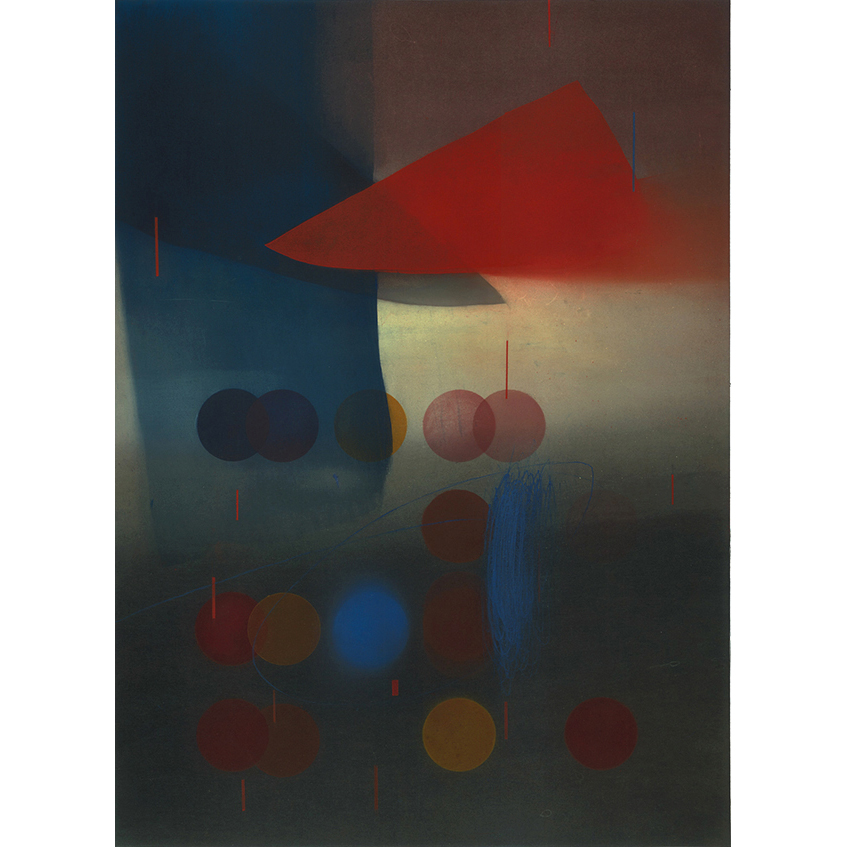 ‘Neuroscience research on long-term meditators has shown that brain function can be permanently changed. An ‘alchemy’ occurs in the brain with the rewiring of neural pathways, giving rise to the term, neuroplasticity.

‘For some researchers, meditation’s impact on health and performance was important, but even more intriguing was the role these practices played in cultivating enduring qualities, such as selflessness, equanimity, and impartial compassion.’ (Delehanty, 2017) 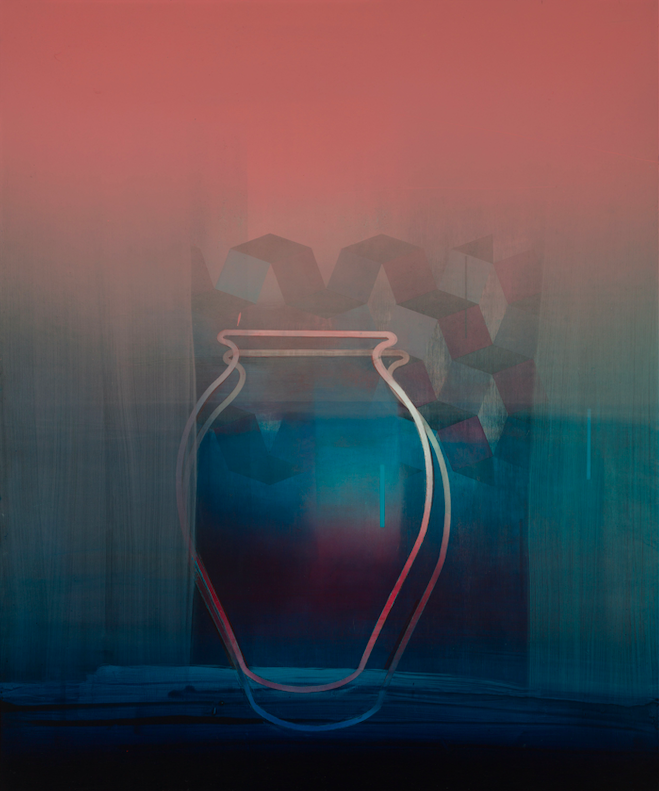 ‘These meditation and mindfulness practices found in contemporary culture originally came from both Eastern and Western mystical traditions that practiced an ‘inner alchemy’.

‘Since the West’s academic interest and research into meditation and particularly the long-term positive changes within brain function, what was once termed ‘inner alchemy’ is now understood within scientific thought. However, ‘stilling’ of the mind is only one part of inner alchemy.

‘The recurring grid-like pattern in these works is a visual metaphor for either a repeated focus on the breath in meditation or Japa meditation when one repeats a mantra (either a word or phrase). This focused type of meditation is the process by which the alchemical container is created and sealed, while simultaneously causing the dissolving of the ‘personal self’. 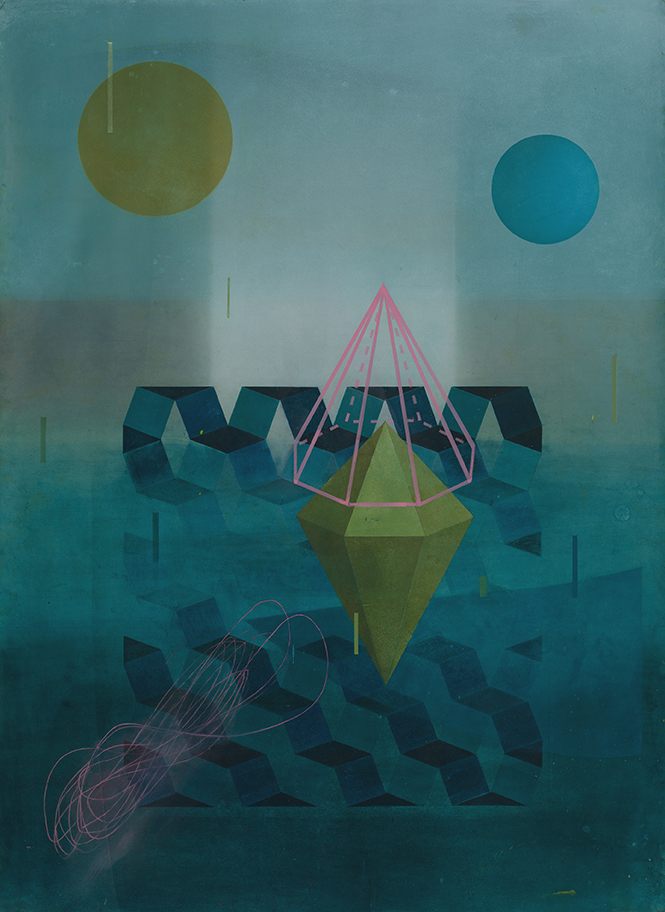 ‘The aspects of ‘light’ or illumination reference the psychological process as one’s mind stills, suppressed experiences begin to rise and are brought into the ‘light’, felt and integrated. Light and illumination also reference the mystical experience of these aspects within a meditative or contemplative practice.’

habitat: What was your first painting or artwork and what inspired it?

Nicholas Hales: When I was about six years old, we had to paint a picture of Father Christmas at school. When we all put our works up on the wall, I thought my painting was the perfect, happy, cheerful Father Christmas. That was the first time I realised I had the ability to make art.

NH: I’m a bit of a nine to fiver. I take it like any other normal job. I find I’m at my most creative and energised in the mornings. So, I try to take advantage of that. The final few weeks before a show mean late nights and working weekends to get everything finished. I listen to pod casts or music when I paint, but sometimes I prefer silence. 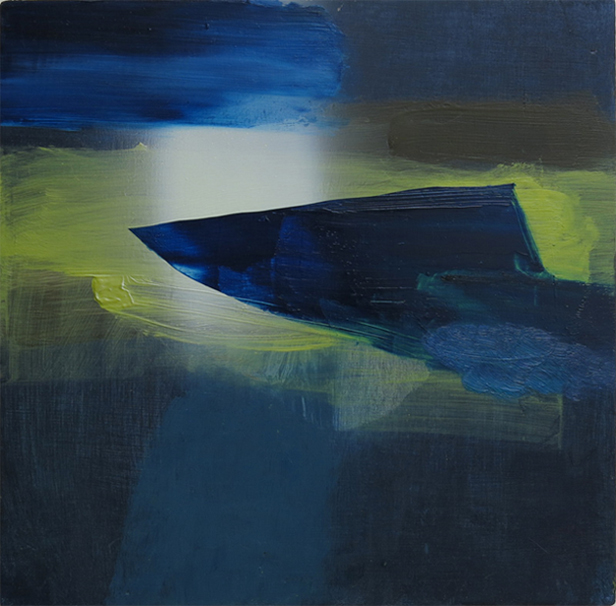 h: Influences on your decision to become an artist?

NH: I studied Graphic design at University of Cape Town, but I would do quite large paintings for my illustration work. I was basically learning to paint. Both my lecturers were painters and were happy to let me work on quite large scale. Once I finished studying, I spent some time working as a graphic designer in London. I wasn’t happy not painting. When I returned to SA, I started to freelance as a graphic designer to give me the time to paint. I had my first solo show in 1999.

h: Where do you go or what do you do to find peace of mind?

NH: I meditate and like to spend time in nature.

h: What are your greatest concerns during these times from a global / local / political or economic and evolutionary perspective?

NH: I’m fairly optimistic. We’re going through very tumultuous times, but I think this has to do with an accelerated evolution in our collective consciousness. The old ‘energies’ trying to remain, while new ‘energies’ and paradigms are pushing through. Change can feel difficult and make us feel vulnerable, but I think we will pull through. The environment is the most obvious concern. I think there is just enough of a thrust and commitment to resolve this crisis, and I hope commitment will only increase.

h: Your impression of the country you live in, the city…the people?

NH: I live in Cape Town. Cape Town has a good balance of incredible natural beauty, and the city is big enough to have enough cultural diversity to make it interesting. It’s also a very creative city and anytime of the year you can get to see really good art. The disparity between rich and poor is still a massive problem in Cape Town and South Africa. Until this is resolved we are not going thrive as a city or nation. The energy crisis we are having is a concern as it seems to be symptomatic of deeper issues. 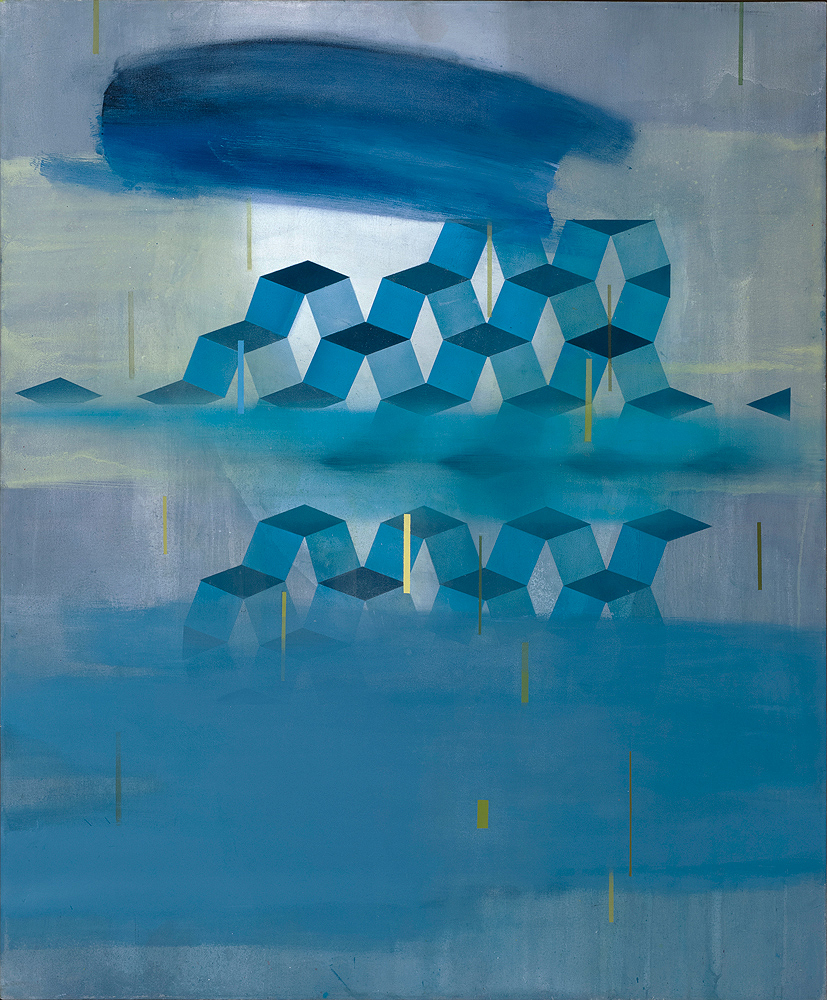 h: How long do you spend on a project?

NH: I never have much of a problem coming up with work to make. Something always wants to express itself or be communicated. I usually make many sketches before I’ll start an artwork. It can take a while before I find a sketch I want to take further. The eventual artwork can be quite similar or very different from the initial sketch. The work takes as long as needed. I’ll finish in a few weeks or a month. Other times I get it to 3/4 finished, and then I let it sit. Often only finishing it when I have a show coming up – or suddenly I know what it needs and how to finish it off. I’m not a fan of rushing.

h: What has been your favourite artwork or project and why and where is it now?

NH: I have two works that I would say are my favourites. One I did for my second solo show in Cape Town at the AVA, gallery in 2002. The other one is, ‘Illumination and arrow headno.1’, from my latest show. The one from the AVA was bought by a woman from Texas, USA. The other one is with 99 Loop Gallery. It isn’t sold yet, and I’ll be happy if it doesn’t so I can keep it for myself. Both represented exactly what I wanted to say and have a mysterious quality to them. They were easy works. No big struggles and both provided their moment where I had to take a risk and the risk worked well in an unexpected way.

h: Art’s impact? When has its purpose been fulfilled in your experience?

NH: Art for me is a form of communication. The artist has something they want to say. Sometimes people respond immediately to what an artist communicates, other times it can take many years or only after their death for people to finally find what they were communicating as interesting and worthy. Other times only a small group of people respond to the work. I think it’s the artist’s job to communicate what is true for them. Then their work is done. I think the only ‘truth’ in art, is in the making of the art. 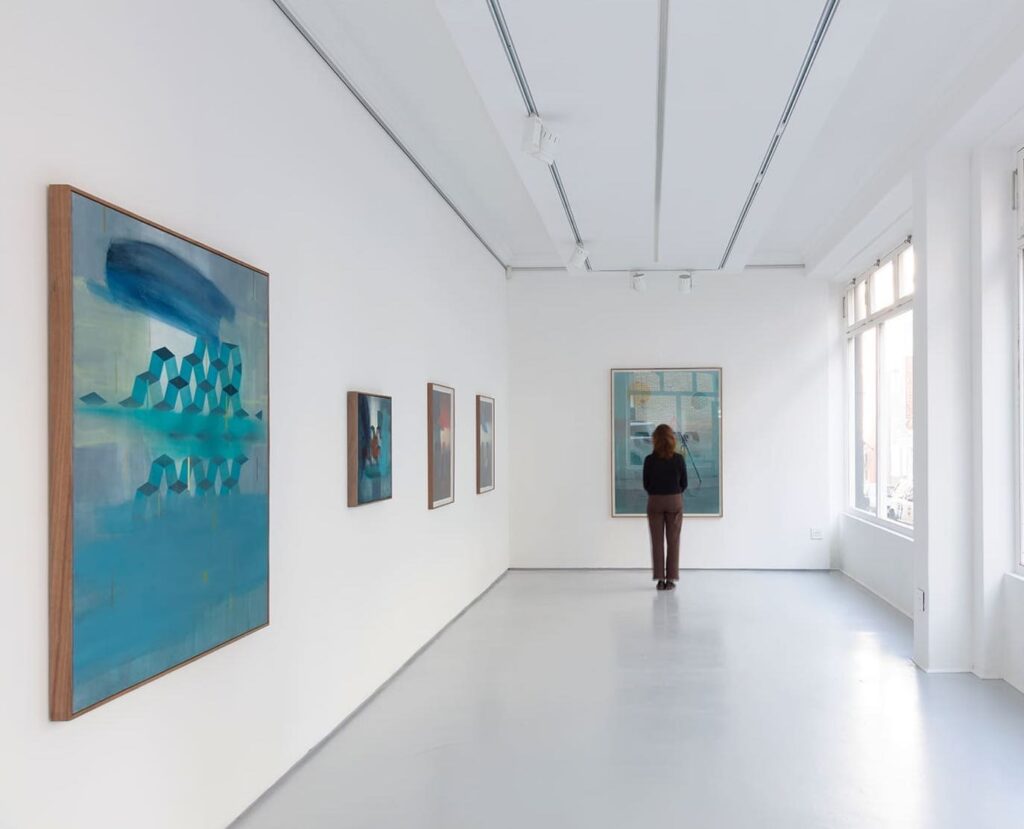 h: What are your passions and hobbies? And do you feel it / they enrich your practice and love affair with art? What way?

NH: When I was 28, I got a chronic illness and I started to meditate for no other reason as I thought it might help with my health. That led to the discovery of an infinite internal landscape, which I could explore. This has fuelled much of my work since.

h: What’s your ideal reaction from an audience?

NH: That they respond, connect to or are moved in some way by the work.

Award won for his work include a Scholarship award for an art residence, at L’Air Arts, Paris, France in 2019, and a Merit winner, ‘What is life exhibition?’ at the South African National Museum, Cape Town, 2002. 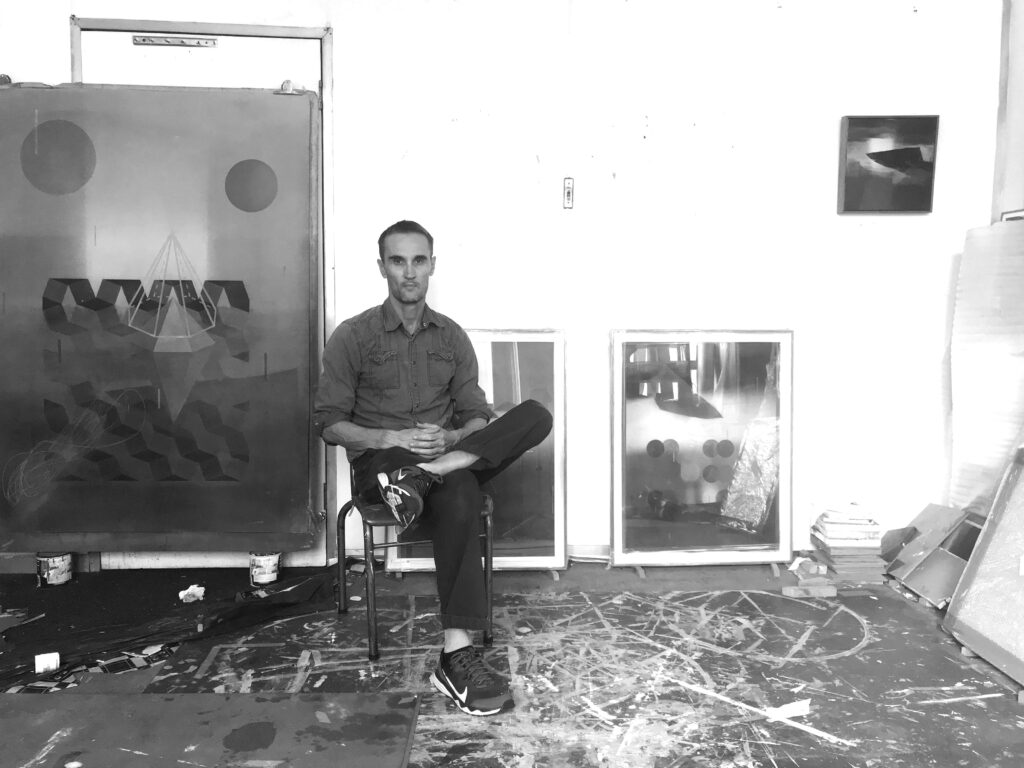