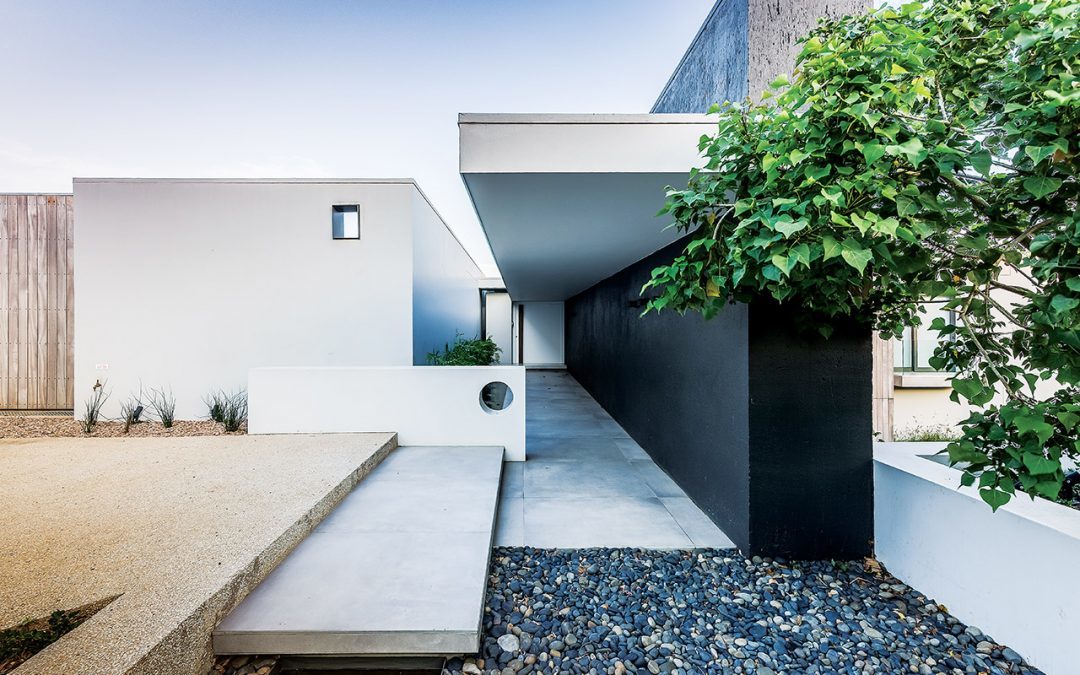 ‘Every great architect is – necessarily – a great poet. He must be a great, original interpreter of his time, his day, his age.’ So, what are the characteristics most appreciated about modern architecture? 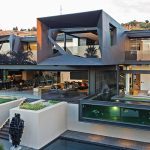 Adrian Maserow of Adrian Maserow Architects: ‘Openness, spatial layering and transparency, clarity of purpose, and refinement through simplicity. The complexity of life can best be refined through an insightful attempt at achieving an ultimate non-complication: architecture that reflects an incisiveness in its holistic resolution is best resolved through its simplicity of composition.

‘When we work within a narrative that attempts to get close to the core issues at hand in design, we attempt to embrace a philosophy that defines the moment we are in. Not necessarily burdened by stylistic imperatives, but through meaningful processes of design, which are bound by the zeitgeist and how we understand the age in which we live.’ 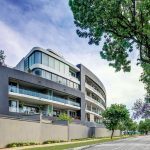 ‘In the 1930s when modern architecture was first identified it was also called the International Style. An appropriate term as it reflects the usability and ease of application that the modern movement has provided,’ so says Dion Walters of Bomax Architects.

‘The common appreciation of modernism is the simplicity of a structure and lack of ornamentation. This was defined by the use of structural steel-reinforced concrete, which resulted in the construction of thin slabs, allowing more glass and light into buildings. Further enhanced by creating open plans with less partitions, it offered more flexibility internally and is a building concept we continue to refine today.’ 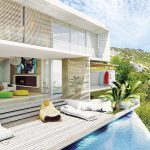 Louise van der Walt of Louise O Architects adds: ‘There is an increasing appreciation of buildings that enhance lifestyles; work in synchronicity with nature; and make use of materials for their lifecycle properties. There is greater understanding that important practical aspects of a brief can be transformed into beautiful creative opportunities.’

‘Technological development has enabled more functional optimisation in building systems and materials, echoing Le Corbusier’s ‘machine for living’. Enclosing elements (external walls) of a building perform to moderate climate and more. We see themes of light and shading, for example, of the seminal Arab World Institute in Paris (Jean Nouvel) in camera-like apertures with moderate sound, light and also a cultural comment on transparency and inward and outward states of being,’ so says Jenny Mills of Cape Town-based Jenny Mills Architects.

Louis Henry Sullivan (1856-1924) was one of the ‘recognised trinity of American architecture’; the maxim ‘form follows function’ is attributed to him. So, ideally the purpose is the essence of the design. This is a principle which suggests that the function is a key objective and drives the overall form of the structure. It indicates that the built space is the result of the intended meaning behind its creation; its raison d’être.

Architect Hugo Hamity of Hugo Hamity Architects agrees: ‘A key factor is the simplicity of form. The functional grace with which the spaces are arranged and interact with each other and the user. Elements that define simplicity are a rational approach to design and the functional use of materials. All design decisions are made based on the function that they serve.’ 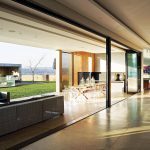 Simplicity is an interesting principle that engenders a natural fondness towards modernist buildings. Simple can often reflect sophistication, which is evident in attire, art and architecture. Simplicity is seldom boring, and this is a key factor in what modern architecture emphasises. Most examples illustrate rectangular shapes and strong lines, very evident in horizontal and vertical elements. It favours such linearity over the decorative, or curvilinear geometry; although the superbly innovative works of Iraqi / British architect – the late Zaha Hadid – contradict this generalisation. 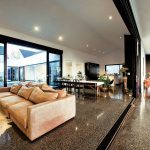 Ben Kotlowitz of KMMA adds: ‘There needs to be distinction between ‘simple’ and ‘simplicity’; one indicates almost a lack of certain valuable attributes, while the other is a more sweeping term that encompasses a quality often hard to achieve in practice. Some designers overlook their designs and add all sorts of fripperies, which actually detract from the power of a really beautiful, well designed object or structure, reducing the simplicity significantly. The more complex work of Zaha Hadid and her partners still relies on the ultimate beauty of the form created to inspire the onlooker.’ 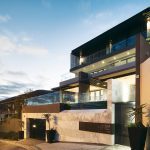 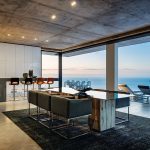 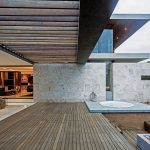 ‘The best is simplicity in design with abstract composition,’ says Donovan Gottsmann of Gottsmann Architects. ‘Other characteristics are the unambiguous relationship between interior and exterior spaces. A celebration of both the simplicity of the structure together with the purity of its context, whether it be a concrete building amidst the city lights or a timber pavilion in a forest of trees.

‘Simplicity involves reducing the core element of the design to that which is functional, that which is honest and that which is refined. It is the art of creating a design which seems effortless by nature. Simplicity in process, may be a somewhat complex arrangement of parts to create something which seems simple by nature. It is not pretentious, but rather refined and actually sophisticated in its development.’ 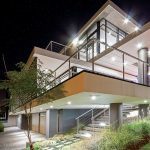 ‘This modernist mantra has morphed today into a design philosophy which uses the ‘least to gain the most!’ Minimalism essentially reflects this aesthetically, although it may not be delivered deploying the minimum means to gain this effect architecturally. Ultimately, functional responses using the sparest means will deliver the most honest reflection of this philosophy,’ says George Elphick of Elphick Proome Architects. 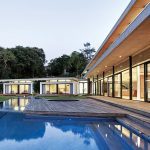 Nico van der Meulen of Nico van der Meulen Architects expands: ‘In best case scenarios this is often reflected in a minimalist approach to a structure and space; the form defined by no excessive ornamentation, rather the bare minimum driven by function and aesthetics in parallel. Minimal, clutter-free buildings promote an atmosphere of ease and tranquillity, a stress-free environment, which is very much au fait with 2019 lifestyle.

‘Mies van der Rohe’s philosophy prompted the requirement of rapid construction and economy, which called for openness, proportion, reflection, materiality and structure to be the main spatial and aesthetic drivers that ultimately developed into the principles of modern design. Mies’ Barcelona Pavilion illustrates this clearly, where openness and continuous space are both magnified and extended through mirror image reflections seen on marble. Less actually becomes more in this instance.’ 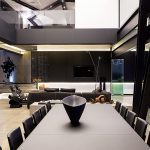 ‘Less is more is appealing to me for the buildings and spaces of the present and future, because it can become the natural backdrop or space to be decorated with furniture and art by and of the inhabitant. He makes the building his in this way and is not fighting a decorative style in the building shell. Because of our rapid pace of life and the mobility to alter the décor of our homes as fashion trends change with greater regularity, a neutral simplicity forms the perfect container for this to happen,’ says architect Kevin Lloyd of Kevin Lloyd Architects. 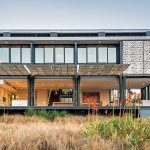 Nick Plewman of Nicholas Plewman Architects summarises the attributes of Modernism and simplicity in 2019 architecture: ‘The clear link between form, function and material and the paring away of extraneous elements should lead to building honesty and integrity. These are values that become more desirable, the less they are apparent in other public discourses.

‘A good modern building might be sophisticated and even complex, but it should have only one big idea or, at worst, combine a minimum number of ideas. The use of clear, bold materials (with an emphasis favouring less rather than more) often follow the precision of the principal design idea. 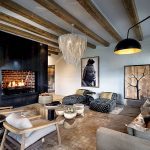 ‘The reason less is more is that it is either a more honest response to form following function with the materials at hand (in the case of traditional, vernacular and necessity-based structures). Or, (in the case of affluent buildings beset by an abundance of choice) it is a well-considered process of selection in search for the essential, often driven by respect for context and environment. If successful it will reflect and evoke a key, but often subliminal value in that context.’