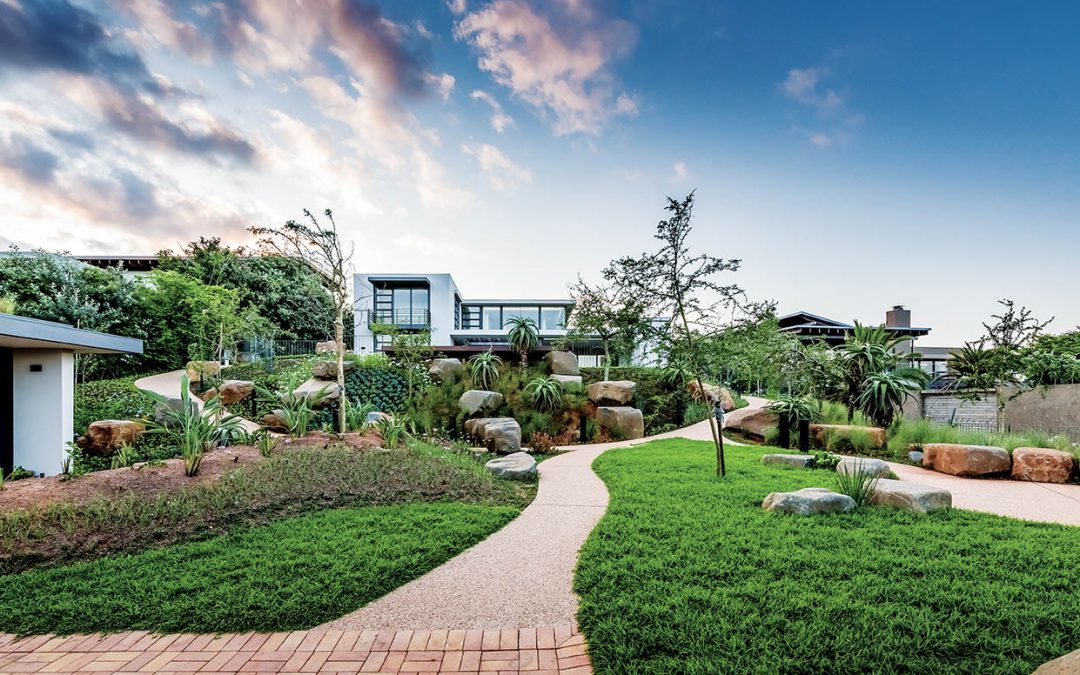 Originally coastal forest before being used by the colonial settlers for sugarcane farming, the land was slightly terraced by the developer and divided up into plots of around 1 000 square metres. This fairly small estate – with some 160 homes marketed as an environmentally sensitive development – adheres to contemporary architectural guidelines. 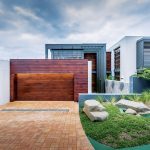 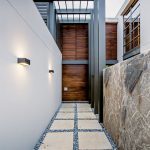 The 2 345-square metre site is moderately sloped in two directions. Views of the ocean extend to the east over neighbouring properties and to the coastal forest in front. To the north are rolling hills still under sugarcane and riverine forest. 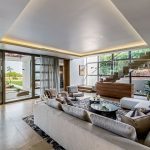 Says architect Kevin Lloyd, ‘The house was a very personally driven brief to include spatial interiors, maximising the views and overall property size; light, sun, and ventilation were to be uncompromising requirements. Estate living and modern property developments are challenged by reduced size, and often, that difficult to achieve privacy required in a very upmarket home.

‘Prerequisites were privacy and space, hence the sheltered courtyards and one with a suburban garden, lawns and substantial trees and shrubs. The architecture had to comply with the guidelines of the estate, with its requirement for natural materials: tones of grey, natural concrete and the use of hardwood. This together with the rectilinear forms and strong horizontal emphasis.

‘Thus, a view of the ocean required that the guidelines define the extent of the envelope of the building. The height restriction is parallel to the existing natural ground level following the slopes, which affects the footprint of a reasonably sized home. This meant that the ground floor was stepped to enable the house to comply.

‘The built structure was conceived to flow out into the garden and courtyards, and yet also able to be divided internally, so that private areas could facilitate individual interests. Existing furniture and artworks from the family’s previous home are pieces of substantial size and quality, which were to be included in the new home. The rooms were consequently upsized to accommodate these. 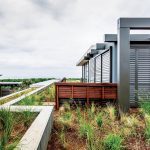 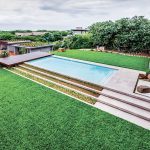 ‘The house is a series of spaces, which are revealed slowly and invitingly from public to private zones, the pool forms part of this and is a feature which, as well as being an axial element, assists in stretching the eye towards the sea and horizon beyond. It has a stepped garden on the long side, which is an extension of the internal stairs and floor levels, thus increasing the link between house and garden. 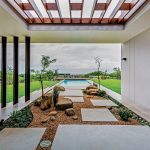 ‘The open-plan living space reveals four distinctive aspects. A double volume south-facing shop front that backs onto a floating timber staircase tumbling down from the first floor. The entrance is a space defined in part by a stone-sheet clad freestanding wall, which also acts as a screen for the west-facing private sunken study courtyard.’ 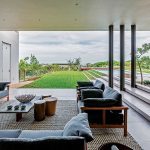 The interior designer continued the stone-sheet cladding within the interior where bathrooms, showers and feature walls appear as thick stone slabs. Cabinetry in stained wood was designed to complement the timber flooring and internal solid doors. A timber detailed screen in Wedgu at the entrance assists in defining this key space. 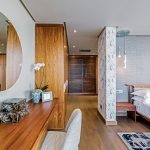 Polished concrete that includes selected white stone in a grey concrete mix was used to pave areas that extend the inside to the outside. These were spaced apart and use particularly sourced and sorted smooth pebbles to achieve a harmonious colour match. 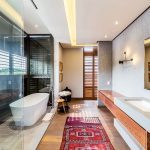 Kevin Lloyd: ‘The success of such projects ideally requires a team which, from the outset, is involved in concept discussions so that the design proceeds seamlessly to completion. Here, both architects and interior designer followed this course successfully.’