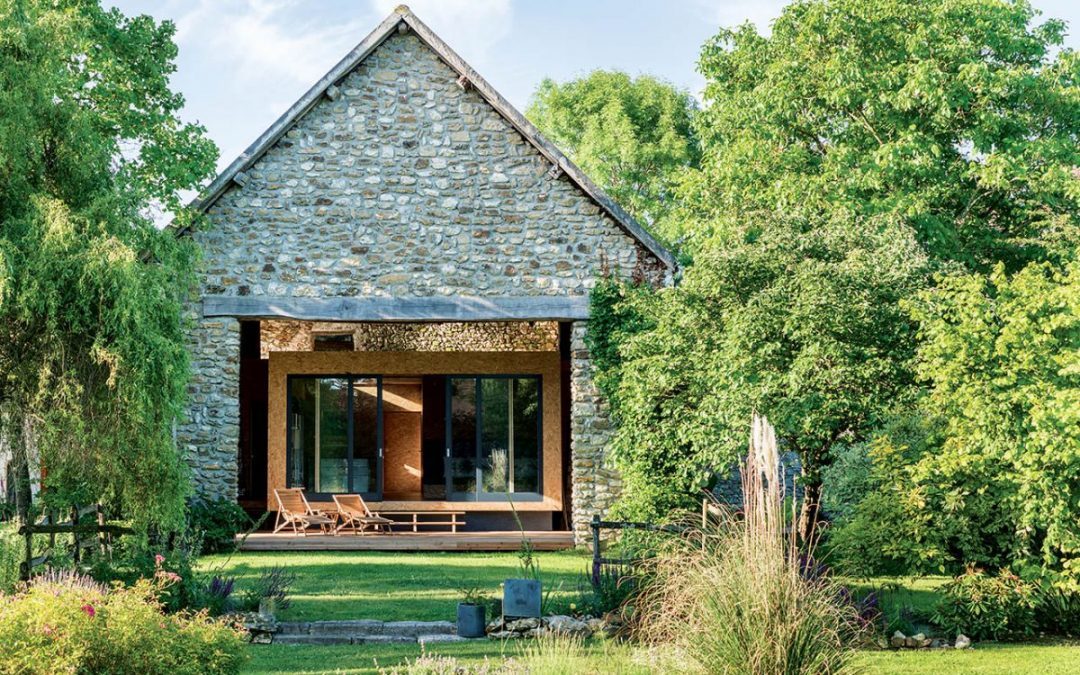 The brief given by the client to the architect / designer was specific: he wished to use this appealing old structure as a guesthouse. Says architect Delphine Waïss: ‘The client had this large property with a number of outbuildings and he chose to use one of them – the largest – for conversion into a guest cottage. Prerequisites were that it should have two bedrooms, and he asked that only local contractors be used in its renovation and reconstruction. 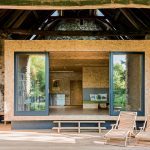 ‘Happily, the client gave me a free hand for the project, albeit with a limited budget.’

Old European country buildings often suffer from poor insulation and rising damp. What were the specific problems in this case?

Delphine Waïss: ‘First we had to renovate and reinforce the basic structure because it was in quite a dilapidated condition. Secondly, we needed to install electricity and water, basic provisions that didn’t exist. The next step was to introduce natural light into the centre of the house and create a view onto the garden. 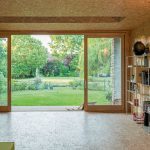 Architect Delphine Waïss created this cabin out of OSB (oriented strand board), which was used for the entire shell, plus door and window frames.

‘In the middle of this old farm building there was a structural wall with one passage, 90cm wide, that we had to retain. So we designed a new layout with the day rooms (kitchen / living room, toilet and bathroom) on one side of the wall and the night rooms (two bedrooms) on the other side. For the construction of what is essentially a wooden cabin, we had to build without using a crane and this was to have an impact on the planning going forward.’ 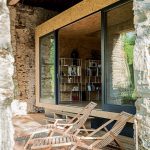 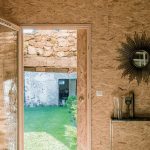 There were certain natural inspirations within this tranquil country location that had an influence on the materials selected for the build. Says Ms Waïss: ‘We wanted to employ wood – like that used for a garden hut – to match up with and complement the existing ancient stone walling. For me, it was important to see the wood both inside and out. The overall concept was to create a simple, modern form for the cabin – like a cube suspended within this old existing farm building. But we wanted to retain the shape and look of the appealing original structure from the exterior.’ 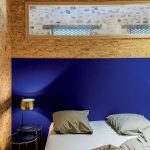 Felt is used as headboard cladding in the bedrooms and around the built-in sofa. The OSB was sourced from a local mill. 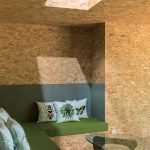 Felt is used as headboard cladding in the bedrooms and around the built-in sofa. The OSB was sourced from a local mill.

A special feature of this construction is the use of OSB (oriented strand board) for the entire internal shell. Made from Canadian Maple and similar timbers, OSB – also known as flakeboard – is a type of engineered lumber similar to particle board, formed by adding adhesives and then compressing layers of wood strands (flakes) in specific orientations. This boarding has a rough and smooth side, the rough surface being suitable for a finishing plaster, such as Rhinolite, and is used as such in the US for timber frame homes.