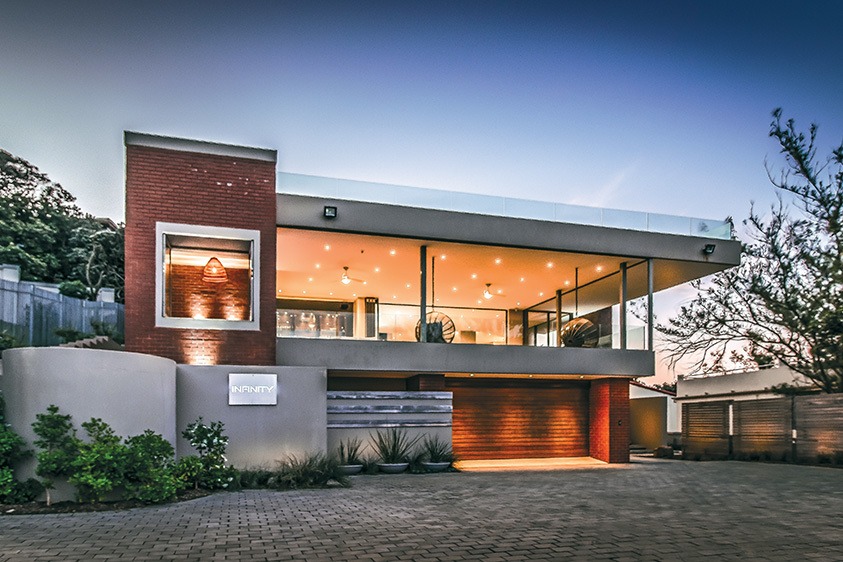 This site was originally two adjoining properties with an existing old house requiring attention on the one half. It was due for demolition and a new house planned to be built over both properties. However, the financial feasibility revealed that this was not viable in terms of the return on investment of building a superior holiday home on the lower KZN South Coast. Consequently, the original home was renovated and the architect then proceeded to design a new holiday home on the remaining site of 1 240 square metres; the house size is 495 square metres. 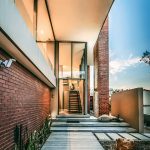 The red brick material and finish was chosen for its maintenance characteristic, while the texture and colour add to the dominance of the forms on which it was used. 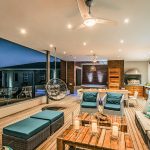 There is a seamless integration between the décor and the physical structure of the home.

Plus factors on the site were a rolling lawn with wild banana plants, milkwoods and other indigenous shrubs and bushes at the rear. The architect’s brief was to maximise the view opportunities towards the ocean and the main swimming beach. They say: ‘The house name is Infinity, thus intimating the desired
end result.

‘We were asked to place the house as high as possible on the site in order to obtain the best ocean views, and yet take cognisance of privacy required for the living and sleeping spaces. Another consideration was the local prevailing winds and rain with respect to covered and outdoor living areas. Yet other requirements were a lawn area for children to play and for boats, cars, beach buggies etc. to park and turn. Living spaces were to be as large as possible and were to incorporate multifunctions and seaside lifestyle. 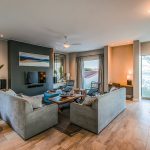 The fresh contemporary scheme unifies the open plan areas in tones of greys, blues and greens reflecting the moody hues of the ocean, juxtaposed with natural wood and textures. 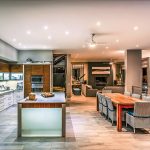 They created a calm and harmonious balance which allows for a comfortable, inviting feel that is not over decorated. 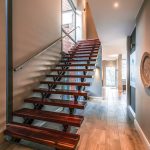 The two floating staircases are both in double volume voids to counterpoint the strong horizontal planes.

‘Our task was to design a family home where friends and relatives spend holidays together and one which would facilitate teenage children. Thus, the home had to be as maintenance free as possible due to the severe corrosion experienced along the coast with holiday homes and their periodic occupation. Requirements were specific as far as materials: face brick, aluminium roof sheeting and aluminium windows and doors. Security, both when occupied and when uninhabited, was a consideration as petty crime does occur in the area.

‘The first task was to remain within the existing local bylaws regarding the new environmental act that states that developments adjacent to the beach / shore must remain within the height restriction controls on a steep site.’ 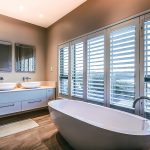 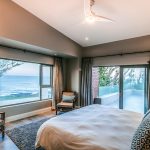 There are four bedrooms with main and guest en suite and walk-in dressing room – the other two sharing a bathroom.

How did the architects approach this exacting brief?

Kevin Lloyd: ‘We had several meetings with the client, both at their home upcountry, on site and with the extended family, to understand their lifestyle and holiday requirements. The site was examined for views, vegetation, privacy and the regulations as to distance from the high water mark, building restriction and ground slope; this determined the driveway positioning and the floor levels that could be achieved.