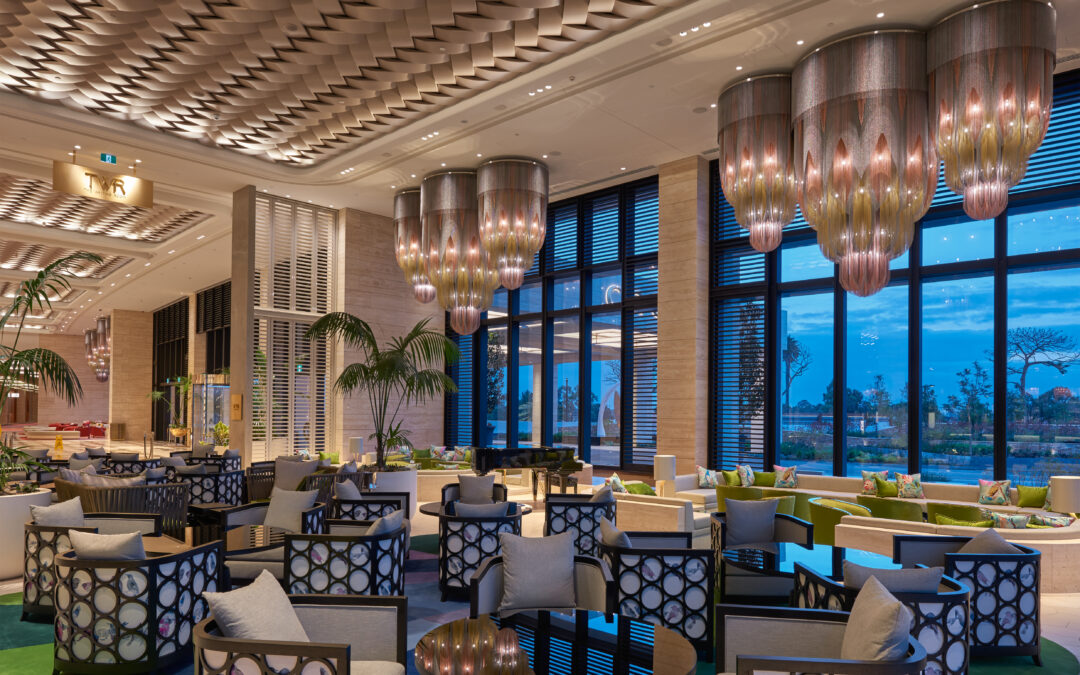 They appear to float from the ceiling, like jellyfish softly illuminating the space, enhancing the relaxed sophistication of spaces such as the culinary jewel of the landmark cultural building on the Swiss shores of Lake Lucerne. The adaptable and versatile construction method used by willowlamp’s company founder Adam Hoets means big creative scope and results in an exceptional range of intricate lighting masterpieces: chandeliers to lamps and pendants, and standard works to bespoke creations. 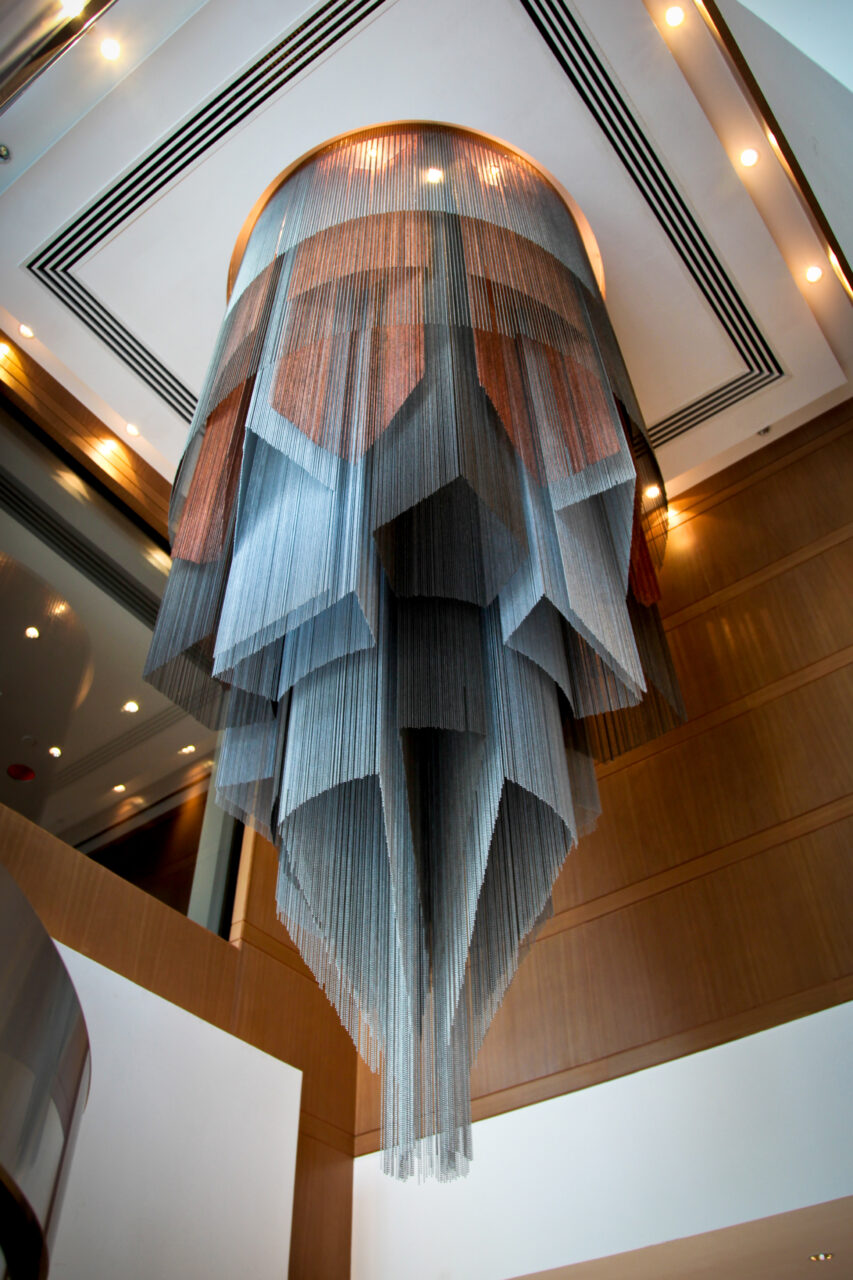 willowlamp designs hang in a variety of prestigious establishments including: The Marriott Hotel in North Carolina; The Lucide Restaurant and The Plu Restaurant and Lounge in Switzerland; Mena House Hotel in Cairo; the Melia and Landmark Hotels in London; Ritz-Carlton Hotels in Dubai and Chicago; Switzerland’s Seerose Resort & Spa; the Liwa Executive Suites and the Shangri-La Hotel in Abu Dhabi; the Clarion Post Hotel in Sweden; The George Hotel in Lagos; Angama Mara Lodge in Kenya and Morocco’s Four Seasons Hotel. 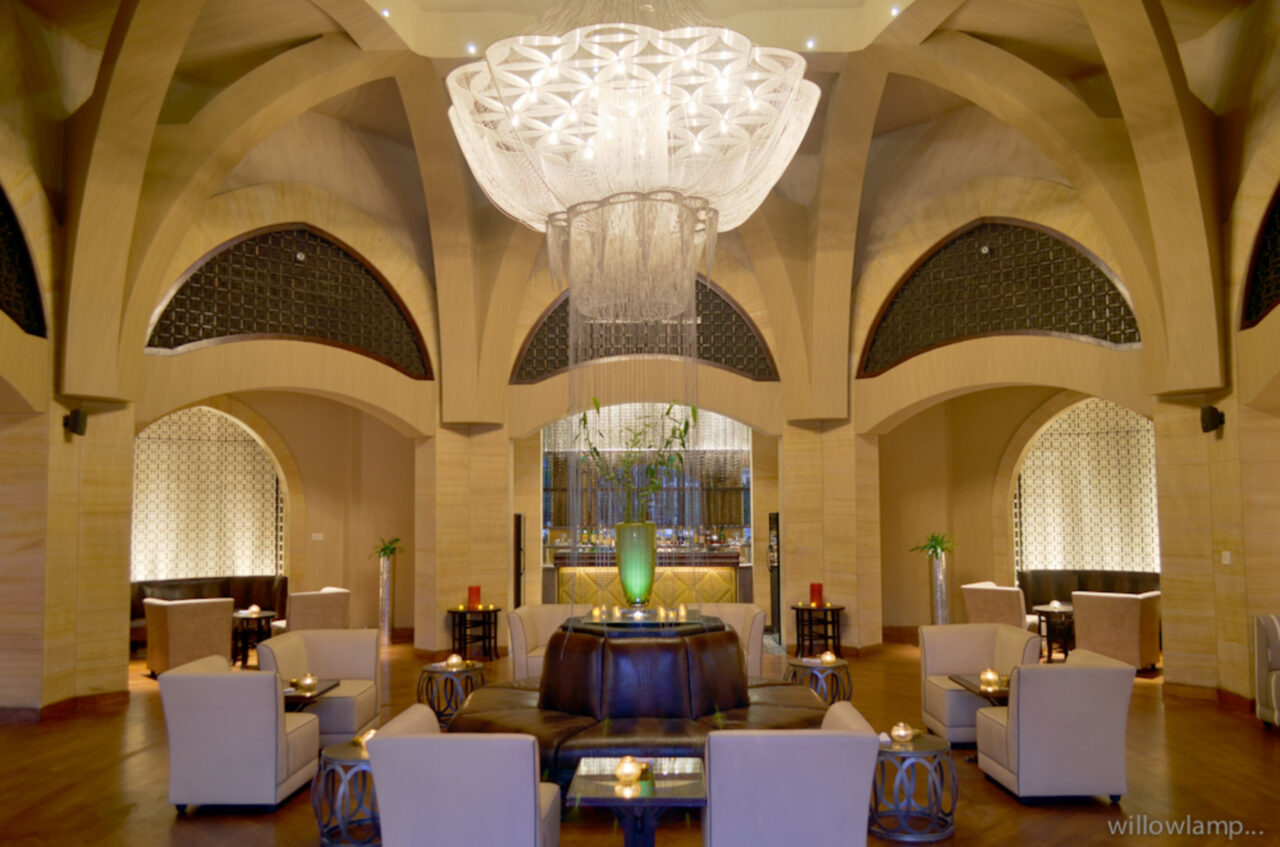 Examples also hang in many private luxury residences. In 2020, the brand branched out from the signature pendant and statement chandeliers into new territory and introduced a range of wall-mounted designs. These facilitate a design dynamic between directional lighting, artworks and objets d’art and allow smaller scale projects to embrace avant-garde possibilities. 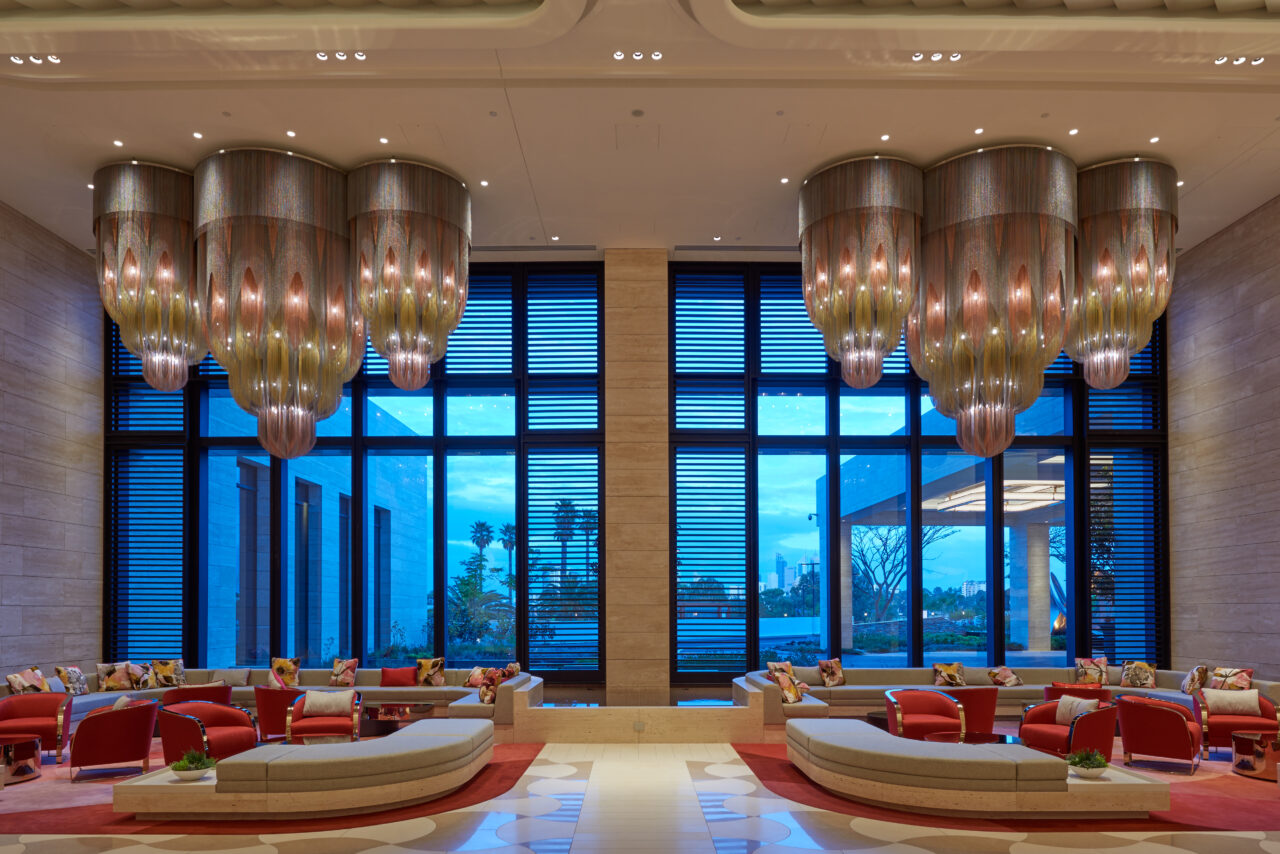 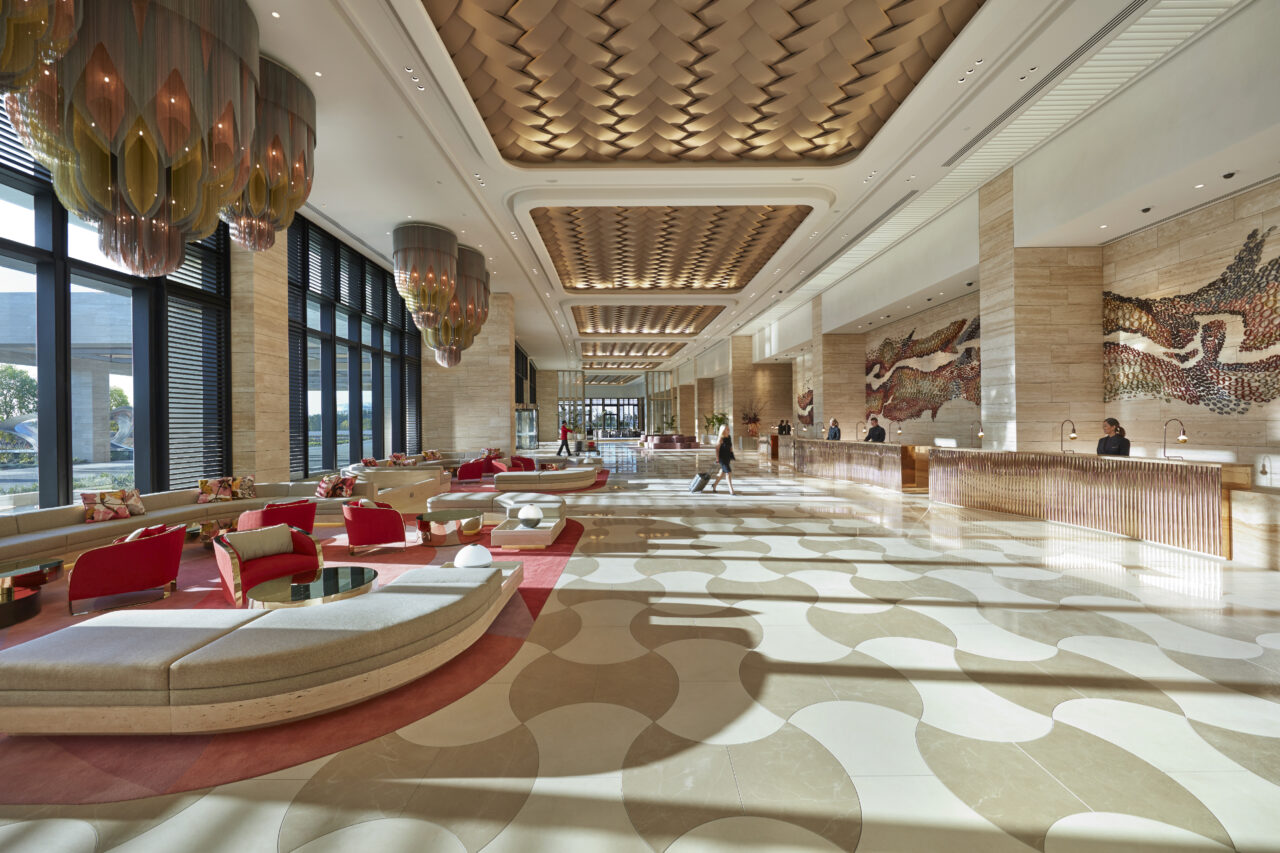 Adam uses a unique method that involves fixing ball chains to laser-cut steel frames. A tiny notch in the metal frame creates a chain curtain that is totally free from fasteners. The company’s most ambitious and challenging project to date was the installation of a set of four three-tonne chandeliers at the Crown Towers Hotel in Perth, Australia, which opened in December 2016. Three years in the making, the project has become one of willowlamp’s proudest accomplishments. In May 2017, the project was awarded second place in the category of Best Use of Decorative Lighting in a Hotel Project at the International D’Arc Awards (Decorative). 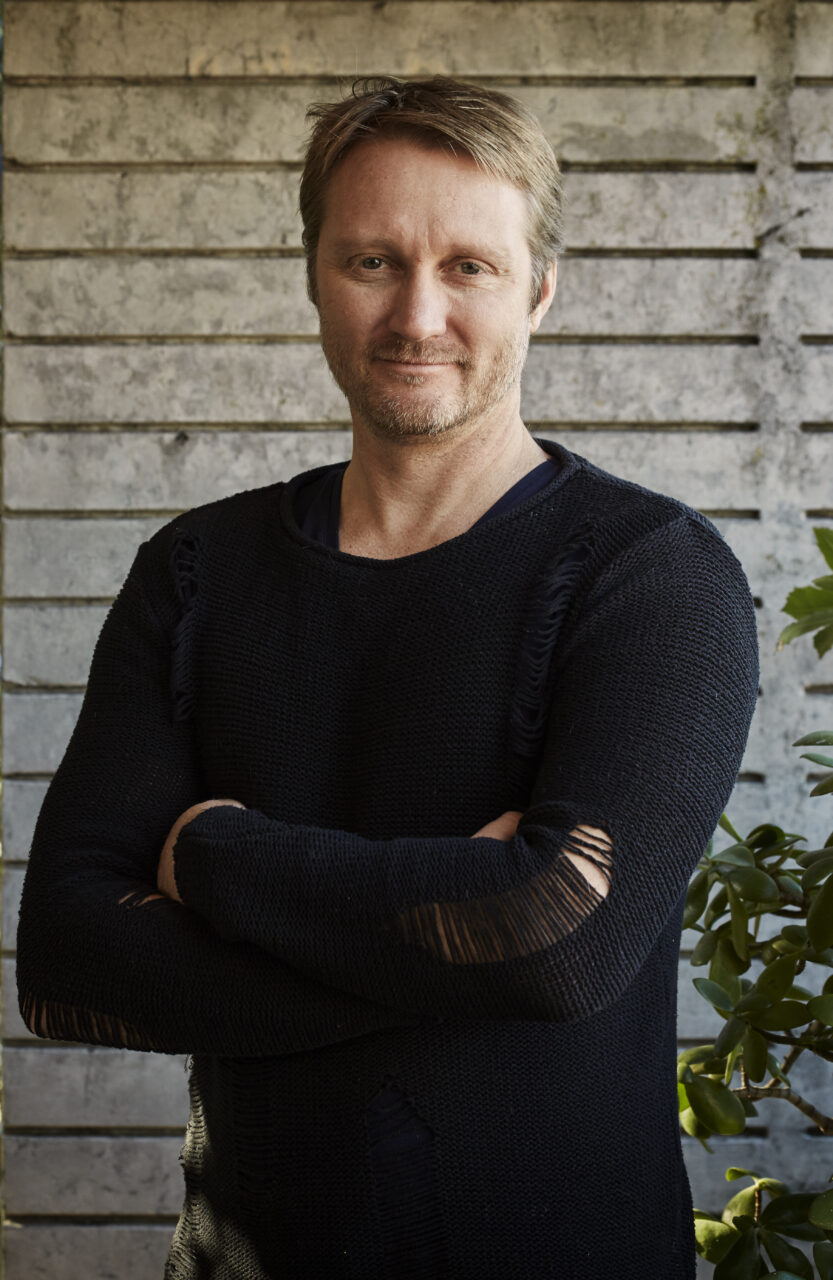 ‘My journey began as an architect, which has been invaluable in shaping my ‘design’ mind,’ says Adam. He owes his creative impulses to an innate predilection for art in various forms, and to the environment in which he grew up. Not only was he surrounded by a host of artists, craftsmen and intellectuals, but his home included a pottery studio, workshop and forest garden where he was able to exercise the boundaries of his own skills.

Lighting up the Shores of a Swiss City’s Lake

The KKL Luzern is close to the historic heart of the Swiss city. This architecturally renowned building is also famous for an acoustically superior concert hall, high-profile music concerts, its conferencing and upmarket events.

The building was designed by famed French architect Jean Nouvel. One of the leading architects of our time, the Pritzker Prize-winning Nouvel is known for designing museums, convention centres, concert halls, prestigious office buildings and residential buildings across the globe. 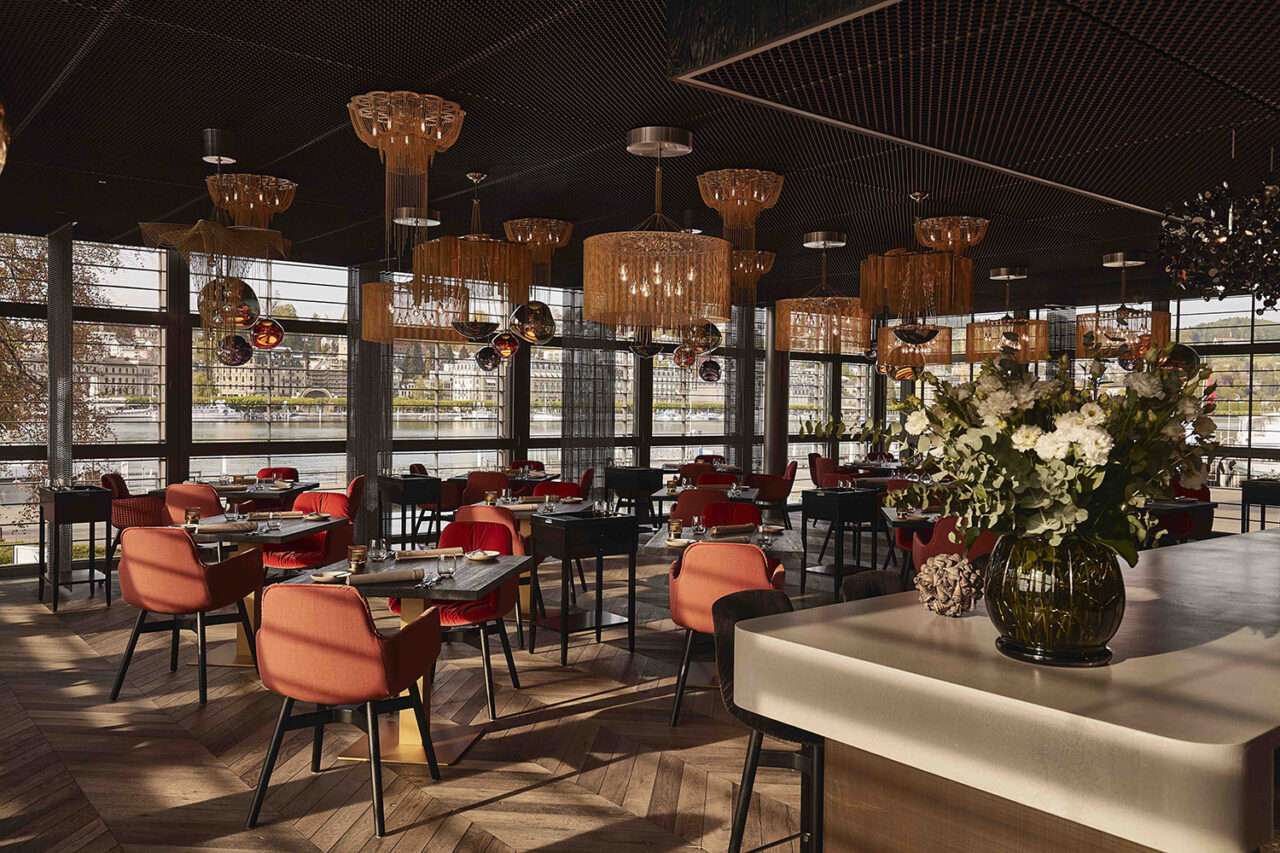 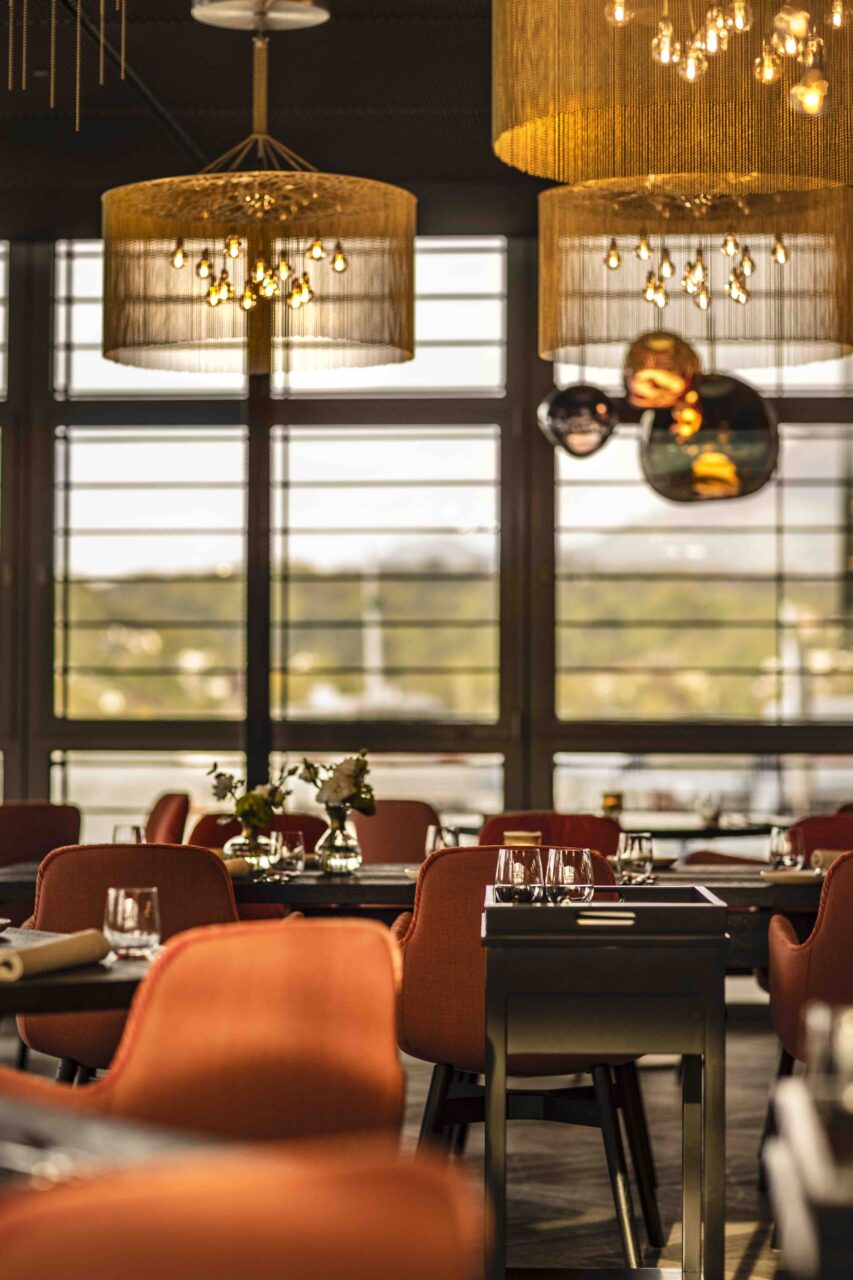 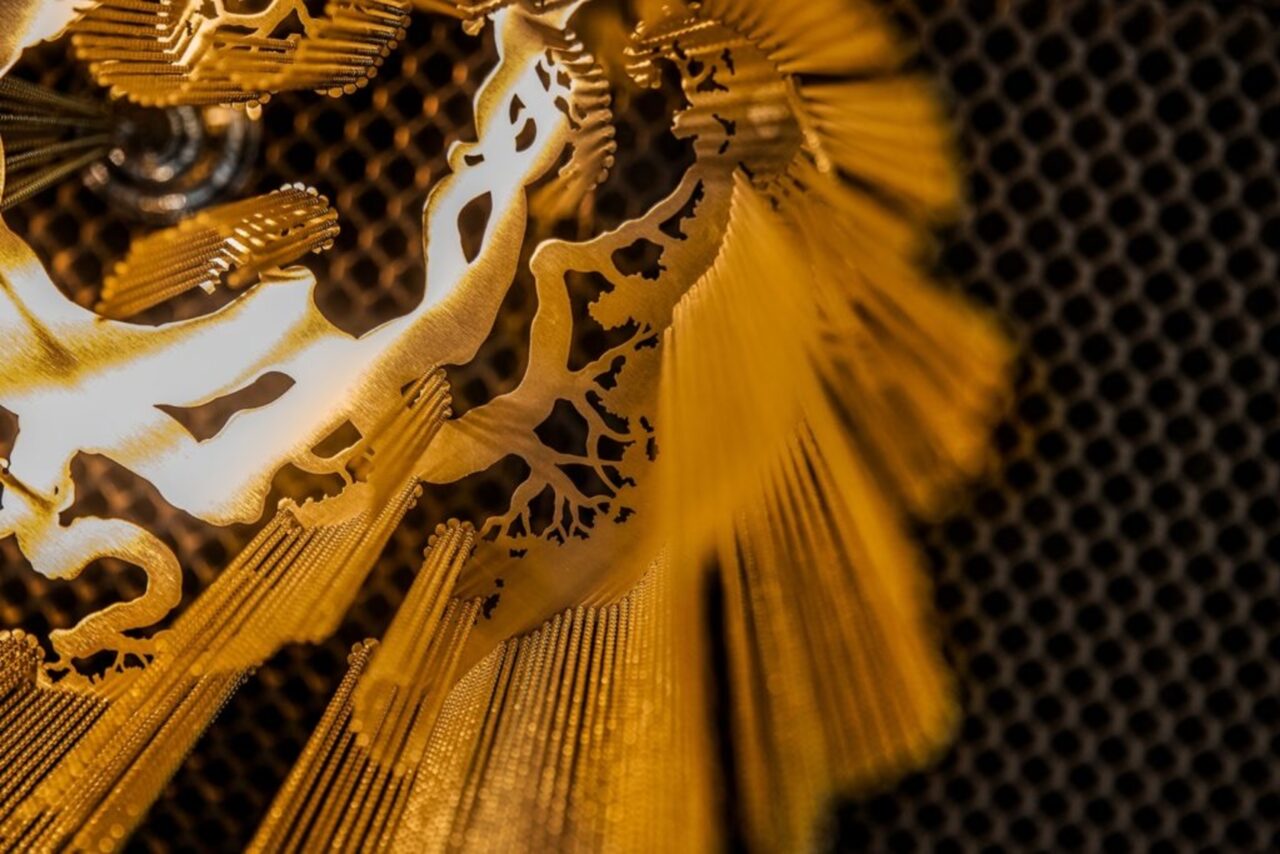 An undeniable talking point of the newly renovated Lucide restaurant is the sea of willowlamps that washes gentle light throughout the venue. Atelier West commissioned willowlamp to create a multitude of chandeliers for Lucide.

A variety of gently cascading fixtures such as the Faraway Tree, Flower of Life, Fuschia and Ngoma Drum,were commissioned for the project.

Flower of Life, willowlamp’s iconic award-winning design, is based on the sacred geometry known as the `flower of life`. This elegant and intricate multi-level chandelier is evocative of a classic 1920`s style. 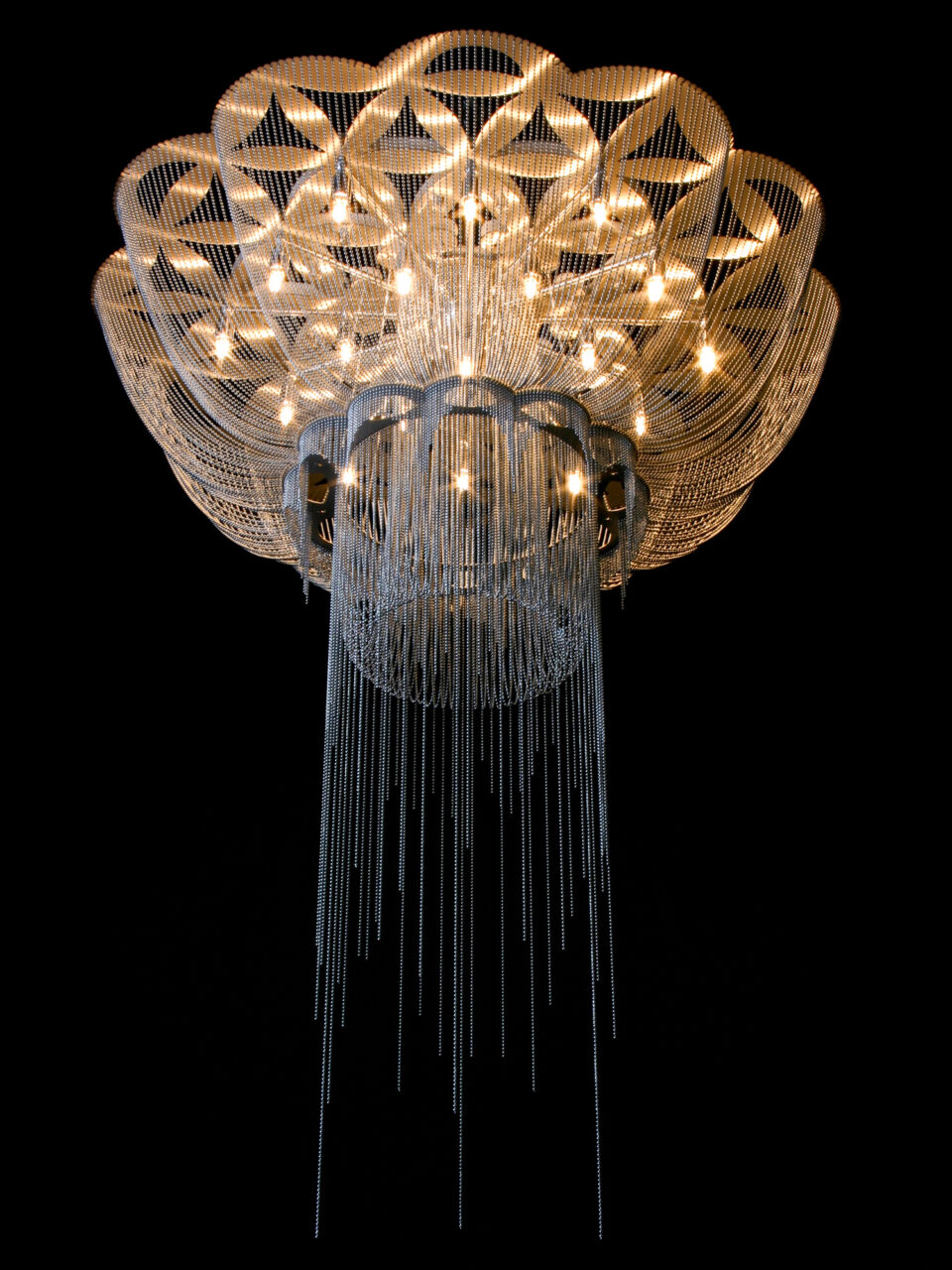 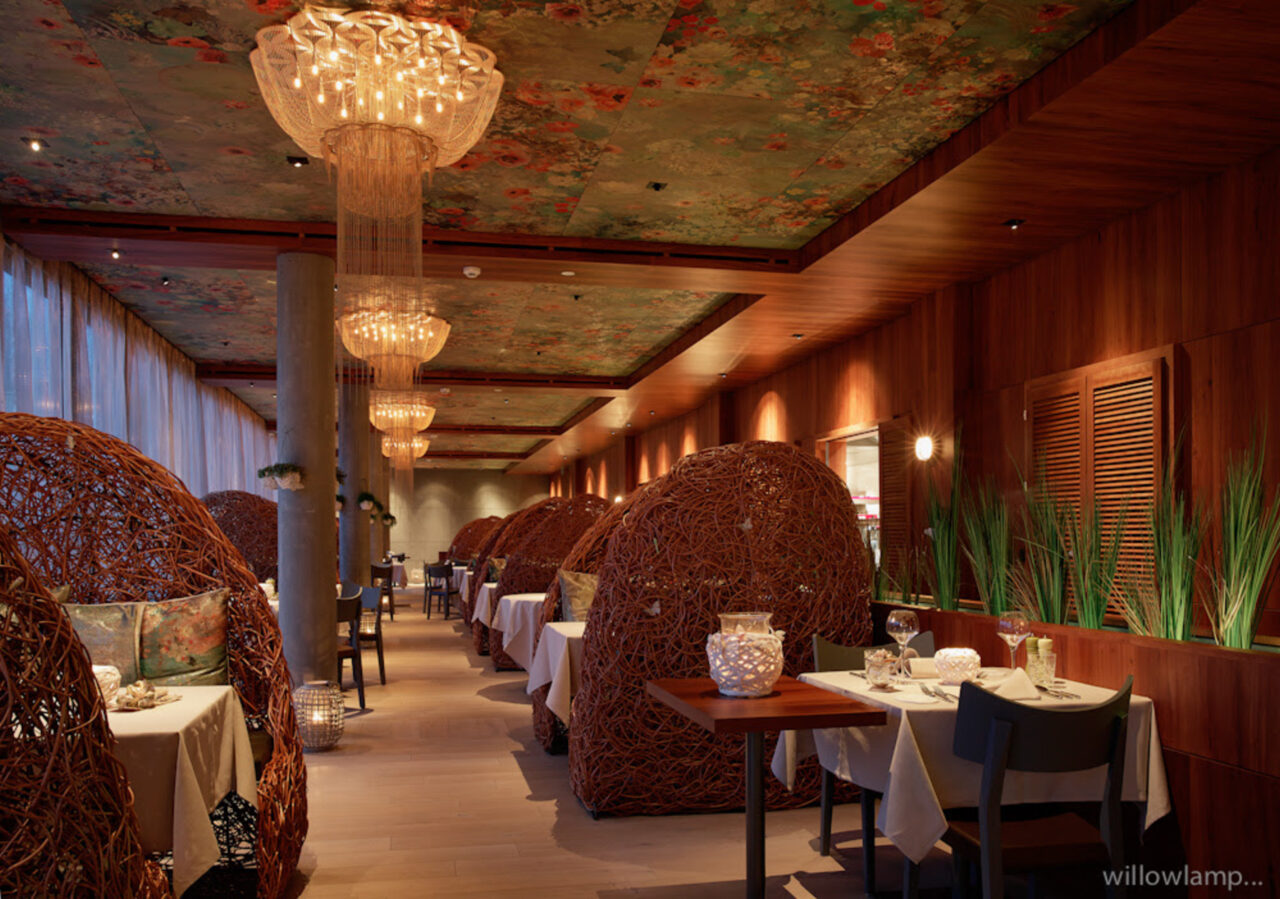 The Faraway Tree is an organic `tree-shaped` chandelier inspired by graphic representations of trees on architectural drawings. It is illuminated by a concealed light source within a suspended up-lighter dish.

The Fuschia’s design is based on the form of dangling Fuschia flowers with the metal ‘petals’ bowing under the weight of the chain. It’s illuminated by a suspended, spiraling arrangement of Pyrex glass balls.

The Ngoma Drum is a cylindrical, drum-shaped chandelier with a support frame inspired by Venetian wrought-iron design. 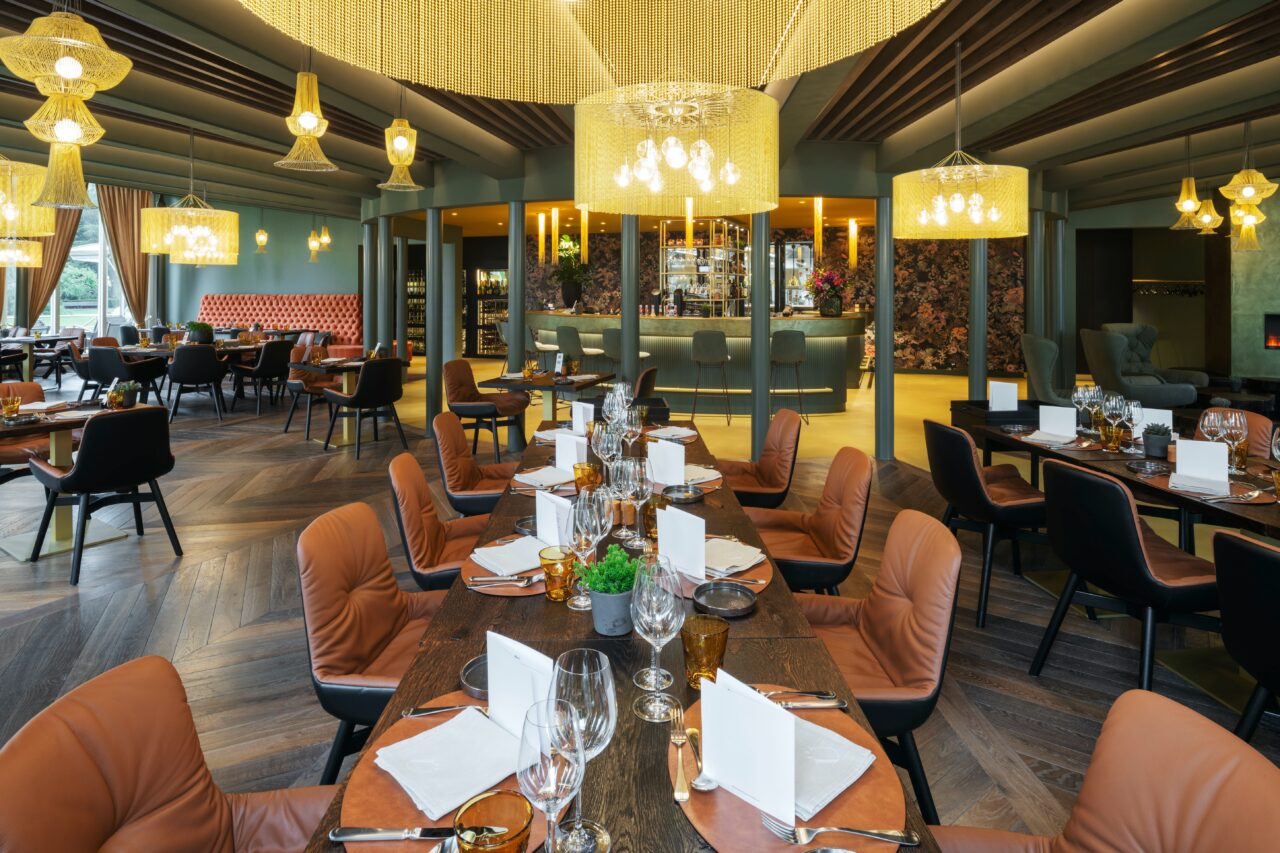 Requiring an impressive 26 cubic metres of space just to hang it, and weighing over a tonne, willowlamp’s new custom chandelier will certainly be a conversation-starter once it has made its way from Cape Town, South Africa across the Atlantic, to its final destination in North Carolina, USA.

willowlamp was commissioned to create this unique statement piece for the new high-end Marriott Hotel currently being completed in Charlotte. Thanks to the chandelier’s girth alone – and never mind its spectacular beauty –  the one-off behemoth is sure to be a talking point when this leading hospitality destination is completed. The 21-storey, 381-room flagship hotel is expected to open this year (2021). The JW Marriott is Charlotte’s first Marriott hotel in this luxury tier.

It is composed of cascading tiers of metallic ball chain. But this piece is not circular like its Mandala predecessor. Instead, it’s a long, narrow ellipse shape. ‘Sort of a squashed Mandala!’ Adam says. This makes the design far more complex and technical to achieve. The chain lengths can’t just be repeated shapes, they have to all be worked out to fit the stretched proportions. To further complicate matters, the chandelier has upper and lower tiers of chain and was almost too big to manufacture on willowlamp’s premises!

The extreme size and weight meant a number of design innovations were needed to bring the Marriot design to life. The extruded shapes in chain curtains had to be broken up into separate panels. Each panel was then individually mounted to a ceiling frame and fitted together like a jigsaw puzzle. ‘It’s the only way to install a piece such as this: the combined weight is one tonne!’

Once installed, the piece will be illuminated by no more than 31 LED lamps. These hang on suspended cables that are hidden within each of the extruded geometrical chain curtain shapes.

It’s a shining example – pun intended – of what happens when technical triumphs combine with exquisite form and is sure to lend verve to the establishment.

The willowlamp team shows no signs of slowing down in their production of modern light fixtures that double as works of art. These are easily identifiable by the signature use of steel plate and ball chains. Adam understands how these materials allow for the creation of an endless variety of forms, with each piece being more spectacular than the last. Foreshadowing the monumental quality of his work’s direction, he admits: ‘The work I am doing now is becoming all-out architectural in scale!’ 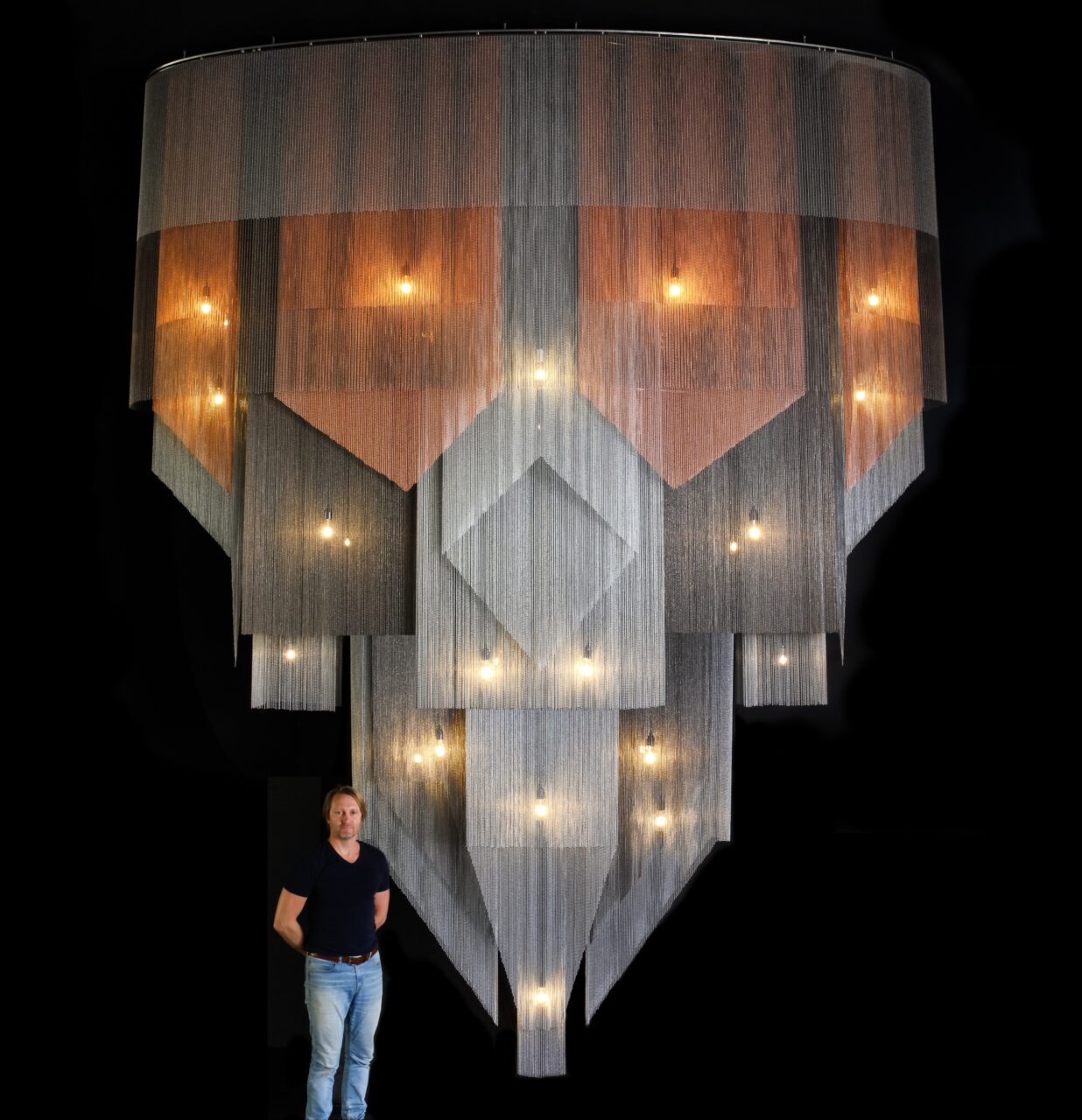