Jeremy Franklin was born in Port Elizabeth, Eastern Cape, South Africa in 1968. He recalls, ‘My family liked to get out and visit friends and places of interest all over the country, including game reserves and farms in remote country districts.’

‘As a child and young adult growing up in South Africa, we all experienced great changes. The country seemed quiet and peaceful, but veiled in a cloak of oppression. You could walk in the suburbs on a Sunday and it was so quiet, a surreal kind of silence. This was a strange environment for me because everything seemed normal and peaceful, yet l came to realise that the people of the country were living under the oppressive laws of apartheid. 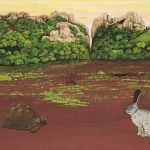 ‘When changes started happening there was great jubilation and celebration, as well as chaos and violence. This was disturbing for all of us coming from a peaceful and relatively quiet life. Many white men were conscripted to fight in the countries surrounding South Africa, as well as within the borders, and were being sent on patrols in and around the townships and made to guard various government institutions.

‘We lived in a time when the bubble burst. South Africa went through a period of bloody chaos that was to reverberate for decades to come; a time of schizophrenic juxtaposition. On one side there was quiet suburbia and rolling countryside, on the other sectioned-off areas in townships and villages. Hidden behind hills and mountains chaos reigned. Thugs and gangsters ruled the townships and were worshipped as heroes by the oppressed people.