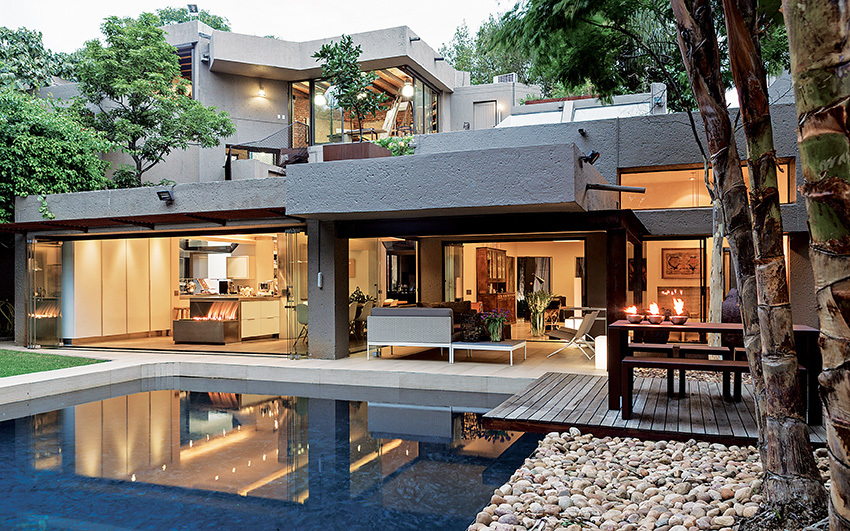 Architect Nico van der Meulen designed this residence for his family in a leafy Johannesburg suburb in the mid-eighties. He had just inaugurated his practice and worked from his home, opting to specialise from the outset in the design of upmarket, contemporary residences. This was an early example. 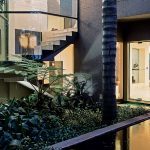 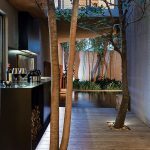 Considering the period in which this contemporary build was conceived, the perfect execution of indoor / outdoor lifestyle is exemplary.

He recalls: ‘It was a verdant, vacant stand of 1 850 square metres, with an old pool and a big white stinkwood tree. The pool and tree were to remain, and the house was to slope, following the contours as there is a fall of land of one level from east to west across the site. The final built structure measured 720 square metres.

‘I’ve always believed in passive design and positioned the house facing 15 degrees east of north, with 66cm thick, north facing walls to firstly create mass to store heat, and secondly, effective sun control. Clay tiles were used over the concrete roofs to create insulation and protect the waterproofing against the Highveld sun. 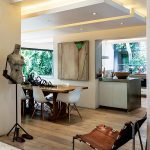 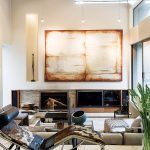 ‘What I envisaged from the outset was a four-bedroom home in a contemporary style and open plan with as much glass as possible and gardens everywhere. All interior areas were to open to the landscape or balconies. And provision had to be made for a home office, with a design studio, plus a studio for my wife who is an artist.’ 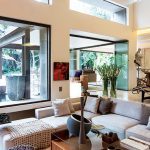 Nico van der Meulen incorporated five atria into the design with an existing deciduous tree retained in one atrium to act as an umbrella over the house; a large water feature to assist with cooling in summer was added. In another atrium, a fast-growing indigenous palm tree was planted, with ground covers to act as a further natural cooling agent, and black bamboo screens in two of the other atria. The atria also serves as part of the security; doors here can be left open on hot summer nights to cool the house naturally.

The open-plan living area incorporates a double volume family room with a water feature leading onto the lanai and an oversized pool. The architect adds: ‘The kitchen was designed as part of the living area and opens up – along with the dining area – to the garden and pool. Wall-to-wall folding doors and a large east-facing window are shaded in the summer by the deciduous tree. 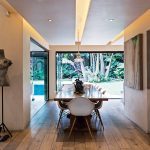 By using several folding stacking doors, the kitchen, dining and family room become a large, open verandah; with the south side of the dining room directly accessing the central atrium.

Nico van der Meulen adds: ‘Much of the glass detailing used had never before been attempted. The original concept was influenced by the work of the Mexican architect Luis Barragan, and originally the house was painted white with cerise and aquamarine focal areas, these being typically Mexican influences. 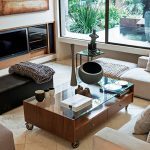 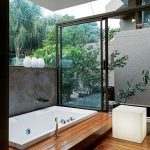 ‘Yet, over the years the built structure became more and more adapted to the South African Highveld, with a micro-climate created by the trees, black bamboo screens and colours that pick up the terrain around the house. The water feature is used as part of the micro-climate: Situated right next to the house, it acts as natural air conditioning when the doors are opened, cooling the breezes that blow through the interior.

‘In the late eighties, most people could not visualise an abstract design such as this, but it clearly illustrated that there were options other than tiled-roof bungalows. Many new ideas were tested here. 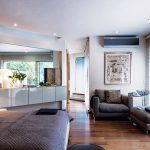 ‘At the time, my focus was to create something unique that would convince clients that this type of home was possible, and also illustrate the use of passive design to reduce the energy consumption. And to allow light into a residential build in various different ways and generally create a more interesting result.’