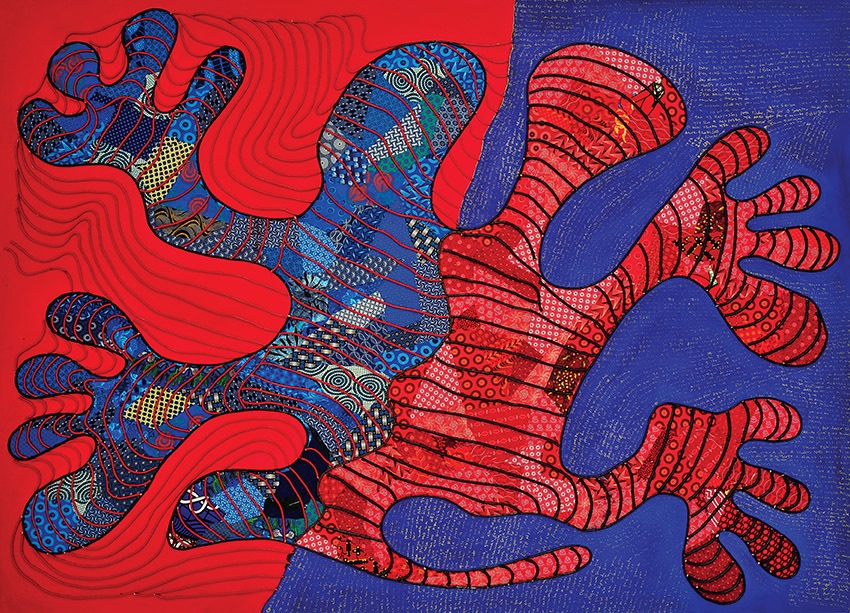 Lizette Chirrime combines textiles and found objects in her symbolic abstract works, which draw inspiration from her journeys and dreams. Her work has featured in several exhibitions, and she has participated in Nando’s Artist Society, Nando’s Chicken Run, and the Creative Block programme managed by Yellowwoods Art. Her first solo exhibition was in Mozambique at the Association of Photography in Maputo.

Originally from Mozambique, she has lived in South Africa since 2005. She recalls: ‘I came to South Africa to find a space, a bigger space, because in Mozambique as an artist you don’t have big spaces. There’s lots of artists, but not much space; and there’s a lot of struggle. So when I had my first solo in Mozambique, which was successful, people enjoyed it and I gained exposure in the media, but I didn’t manage to sell. I then realised that I can take my tools anywhere and find a space to work as an artist’. 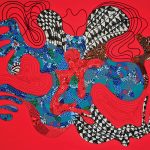 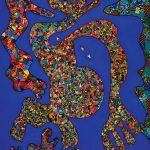 What was the pull that drew her to Cape Town?

She says: ‘I felt it was just right, although I had never been there before. Being in Mozambique, having experienced much hardship – beginning with my childhood – I decided that I needed to go somewhere where I could start from the beginning.

‘I had the opportunity to go either to the U.K, Portugal or Spain, because I have family and contacts in those countries. But it didn’t feel right. Firstly it was too far and, because I’m a single mother it was too complicated. Each time I thought of Cape Town it evoked positive energy so I decided to follow my instinct. When I arrived in 2005, I walked everywhere with photographs of my work, I knocked on gallery doors – and it wasn’t easy.

‘Eventually I met a priest and he took me to Greatmore Studios. They liked my work and they found funding for me to do a residency programme for three months; this was when the doors began to open for my art.’ 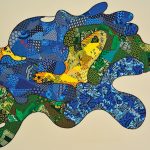 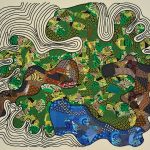 The origins of Lizette Chirrime’s artmaking in Mozambique began in her home where she would ‘decorate’ and make things; subsequently she started to recycle material – cow hide, hessian sacks and bags used for coffee and beans. With these she fashioned tapestries, incorporating multimedia objects. She enjoyed this work, but realised that these materials may not last long. This is when she started to slowly transform her work and eventually discovered her quilting technique.

In terms of subject matter a recurring motif has been hands and feet, which was evident from the beginning.

She adds: ‘For me hands always symbolise stop. This was something I was unable to say to people from childhood. I always would attract those that rejected me, treating me in a way that I didn’t feel comfortable with. So for me hands were ‘stop’. I think it was my sub-conscious soul telling them to stop until I learned to speak up. And the feet are movement, a calling for me to go somewhere, to do things, to not stay in one place. I always believed that you learn and enrich your soul by moving from one place to another. 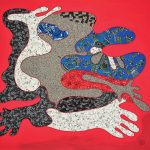 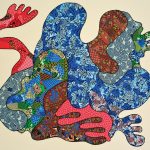 ‘I have evolved into a spiritual person and I seek spirituality. I see life as an open book that I could just read through and follow, and I learn from people and my experiences. The spirits that manifest in my work are from dreams. My work is a process of dressing these spirits, bringing them to life and giving them form, because when I draw them they don’t even make sense.