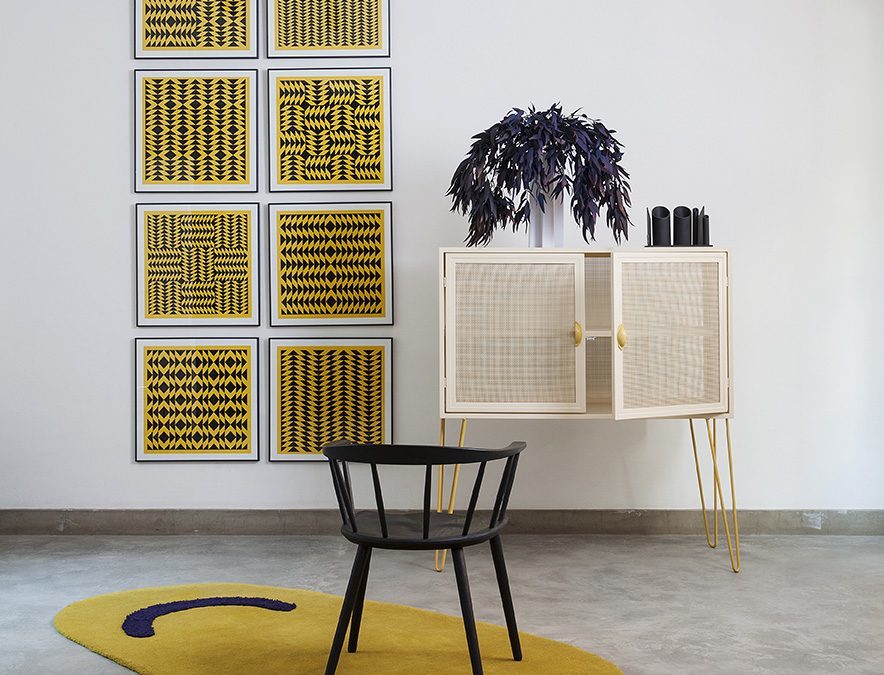 With large-scale public artworks located anywhere from Azerbaijan to Brighton, the internationally recognised and locally celebrated street artist, r1. is set to be 100% Design South Africa’s first-ever Feature Artist of the Year for 2019. This Johannesburg-based visionary is known for striking and vibrant artworks that are showcased in and around a city’s built environment. He refers to his pieces as ‘urban interventions’ that generate dialogue and serve as a means of engagement with the general public. 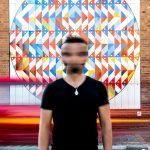 r1. uses a combination of found materials and repurposed objects to create interactive art pieces that change the city’s streets. His work embraces a dynamic sense of geometry and the unexpected use of reclaimed wood, street signs, barrier tape and other unusual materials. These astonishing pieces grace the corners of buildings, fences, abandoned buildings, high-rise walls… anywhere, really.

He honed his signature style on the streets of London and Brighton, first catching the attention of the publilc around 2011. Having left his mark on the UK landscape, he returned to Johannesburg to pave a new pathway of opportunity, envisioning the City of Gold as a fresh canvas. 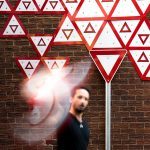 Since his return to South Africa he has created a repertoire of temporary works and third party-funded permanent projects such as Hidden Trophy, an installation made of reflective chevron street signs, a 20-metre piece on the façade of August House in Doornfontein, and Brothers in Benches – a series of mobile seats upcycled from used wooden pallets that was part of a residency programme in Maboneng.

The nature of r1.’s work prompted the curators of 100% Design South Africa – Laurence Brick and Cathy O’Clery of Platform Creative Agency – to recognise that its boldness would be a catalyst for a fresh and exciting direction for the show itself and the interior design industry at large. 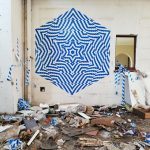 Not only have new, smaller-scale pieces (that would sit well in any interior) been born out of the collaboration between r1. and 100% Design South Africa so far, but r1.’s recognisable style also features prominently in the visual campaign for the 2019 event, set to take place from 7 to 11 August 2019, alongside Decorex Joburg at the Gallagher Convention Centre. All of the new works will be on show as part of a specially dedicated exhibition at 100% Design South Africa, where r1. will be on hand to meet the trade and interact with visitors.

‘r1. is a creative force whose bold artworks breathe life back into our surroundings. His thought-provoking optical fields capture the eyes and refuse to let go,’ says Laurence Brick, the Creative Director of 100% Design South Africa. 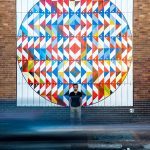 ‘We are confident that interior designers, decorators, architects and members of the public will be as inspired as we are and that r1.’s presentation will spark the genesis of a host of new interior murals, wallpapers and product collaborations – which is the intention,’ Brick continues.

100% Design South Africa is the number-one platform for sourcing high-end contemporary design products and brands on the continent. Guests can look forward to a variety of product, surface, furniture and interior designers in a line-up of rising stars and established stalwarts.

Having won the AAXO ROAR Award for Best Trade & Consumer Exhibition (under 6 000 sqm) in both 2016 and 2017, the 6th installation of 100% Design South Africa will expose both the trade and traders to sophisticated business opportunities where they can build new networks and relationships. 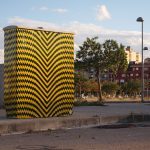 As part of the stable of award-winning Reed Exhibitions – the world’s leading event organiser with over 500 events in 30 countries, including premium design fairs like Maison & Objet in Paris, Wohnen and Interieur in Austria and Design Tokyo – 100% Design South Africa benefits from an international standard of production and global renown.