The Elegant Allure of Giant Liquorice Allsorts-Looking Comfort in Style 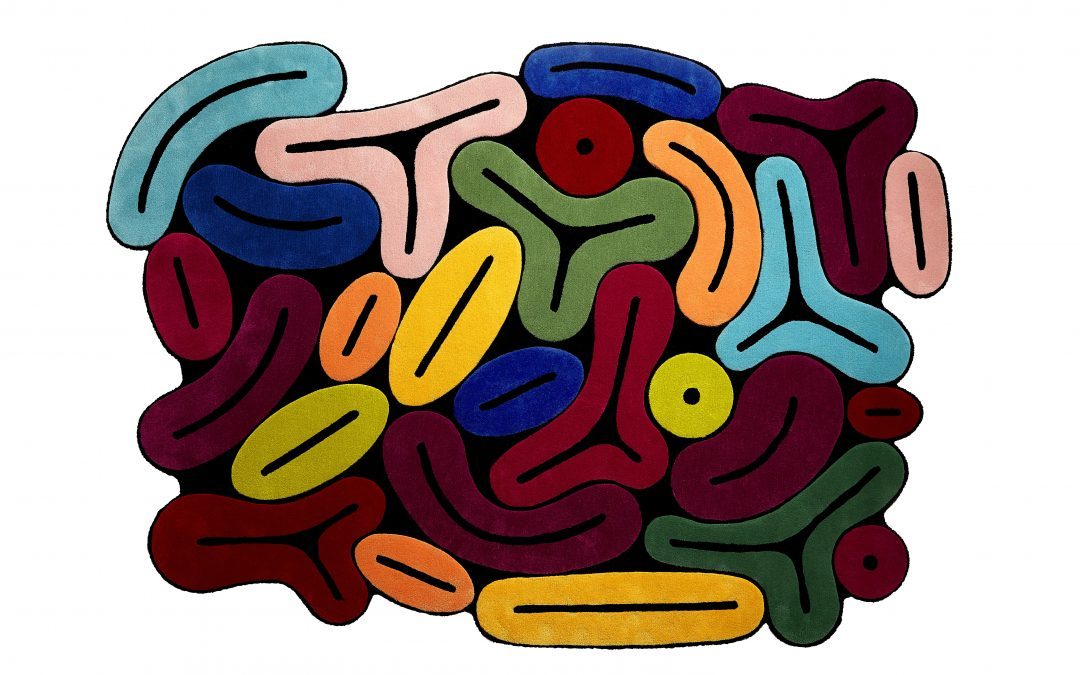 Roche Bobois is the story of two families, the Roches and the Chouchans, predestined to meet. In 1950, Jacques Roche purchased the old Alexandre Dumas Theater on Rue de Lyon and built two stores. His sons, Philippe and François, joined the company and together established the company’s development strategy. They began to distribute the very best contemporary furniture, which was heavily inspired by Bauhaus designers, such as Minvielle, Steiner and Airbourne, and equally inspired by renowned designers such as Pierre Paulin and Marc Berthier. At this time, the Chouchans were selling furniture in Paris on Boulevard Sébastopol at Au Beau Bois (which later became Bobois). 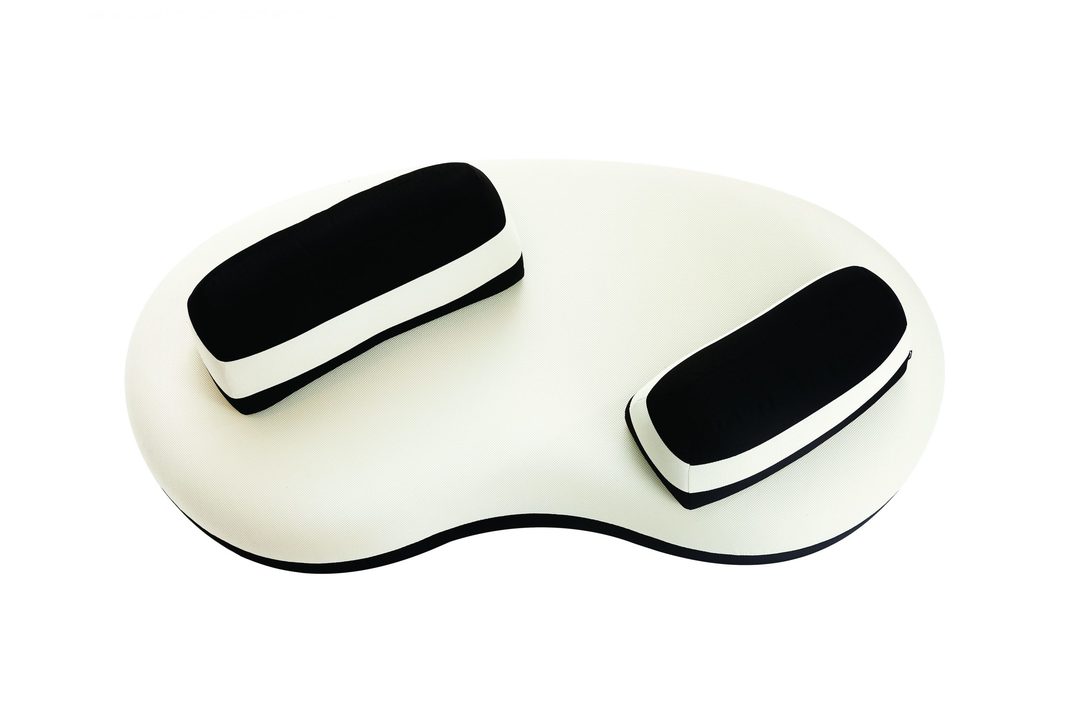 In celebration of the 60th anniversary of Roche Bobois, the French manufacturer decided to continue their dialogue with Joana Vasconcelos by asking her to design a line of seating and decorative accessories for the flagship collection of the year.
Maintaining the point of view of an artist rather than a designer, Vasconcelos took on the challenge of designing pieces intended to interact with a wider audience. By transposing her themes and questioning to everyday objects, she adapts her vision of the world to the organisation of living spaces.

For this collaboration, the manufacturer’s first intention was to give voice to a contemporary artist who is touching yet surprising, and to offer her to work with an unusual medium of expression: the functional object. Lastly and above all, the goal was to offer their clients ‘the chance to bring home a piece of a dream: a creative, flamboyant and delightful collection, an optimistic and quirky version of French art de vivre, as transcended by the eye of Joana Vasconcelos,’ says Nicolas Roche. 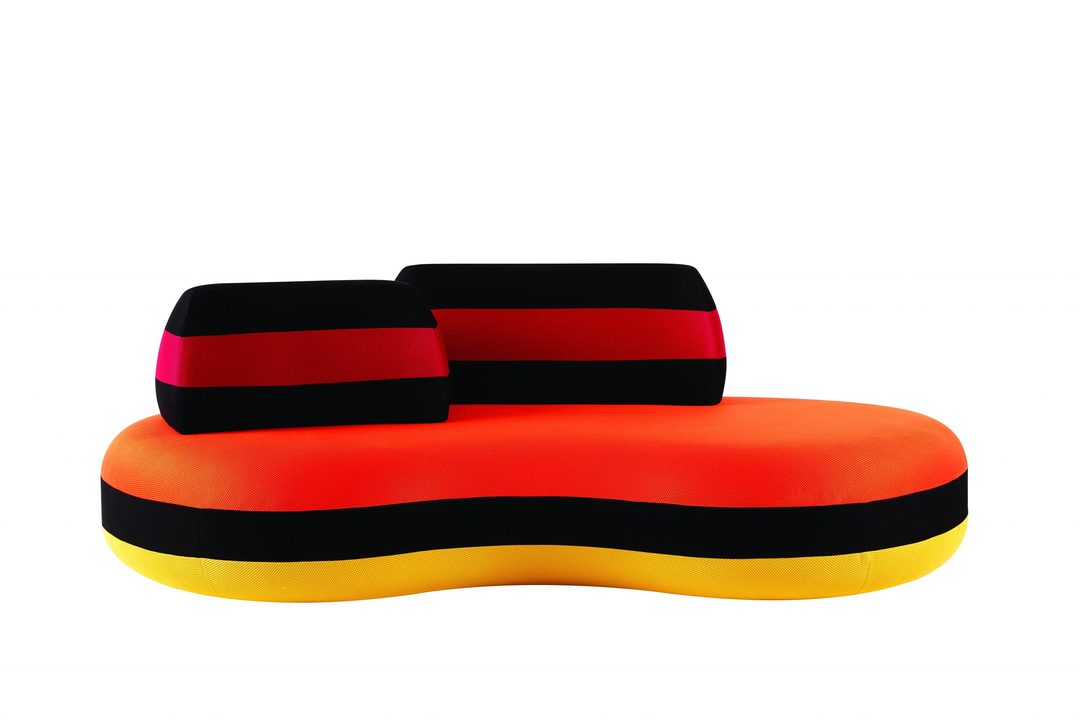 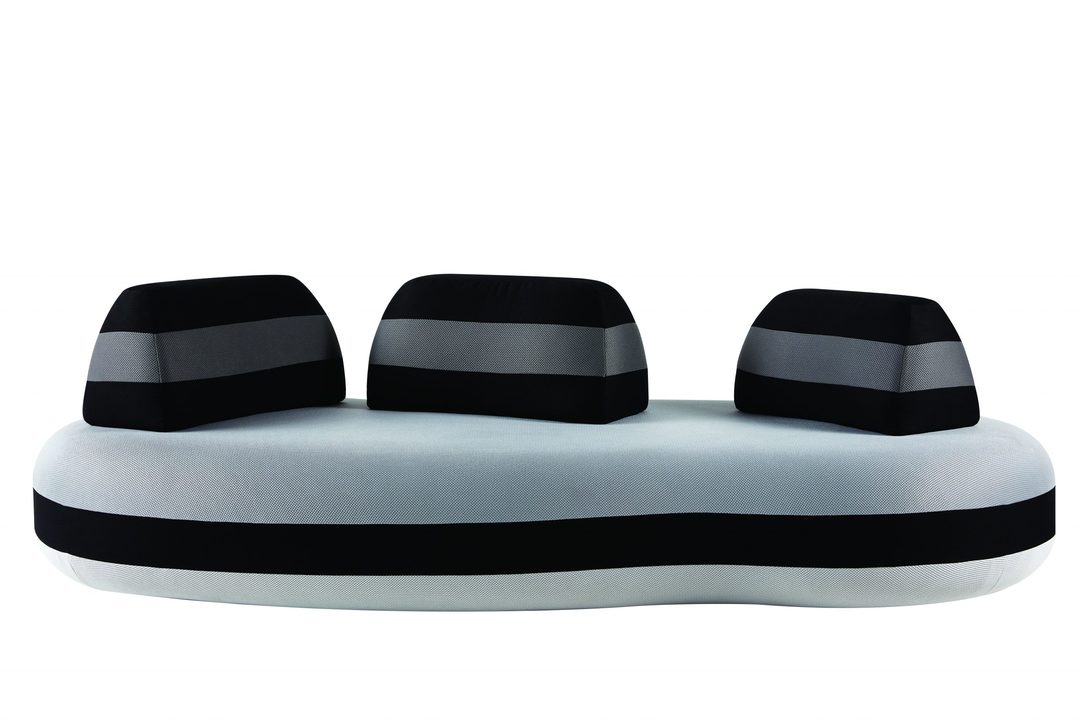 A series with fluid, organic and generous shapes that can be composed and combined according to one’s wishes. The colours reflect Vasconcelos’s optimism and creativity: direct, fresh, tart and deep shades are united yet outlined by the black stripes. The backs are mobile and independent, allowing free form for each sofa. Personal solutions for either sitting or lying down are able to be designed with freedom. 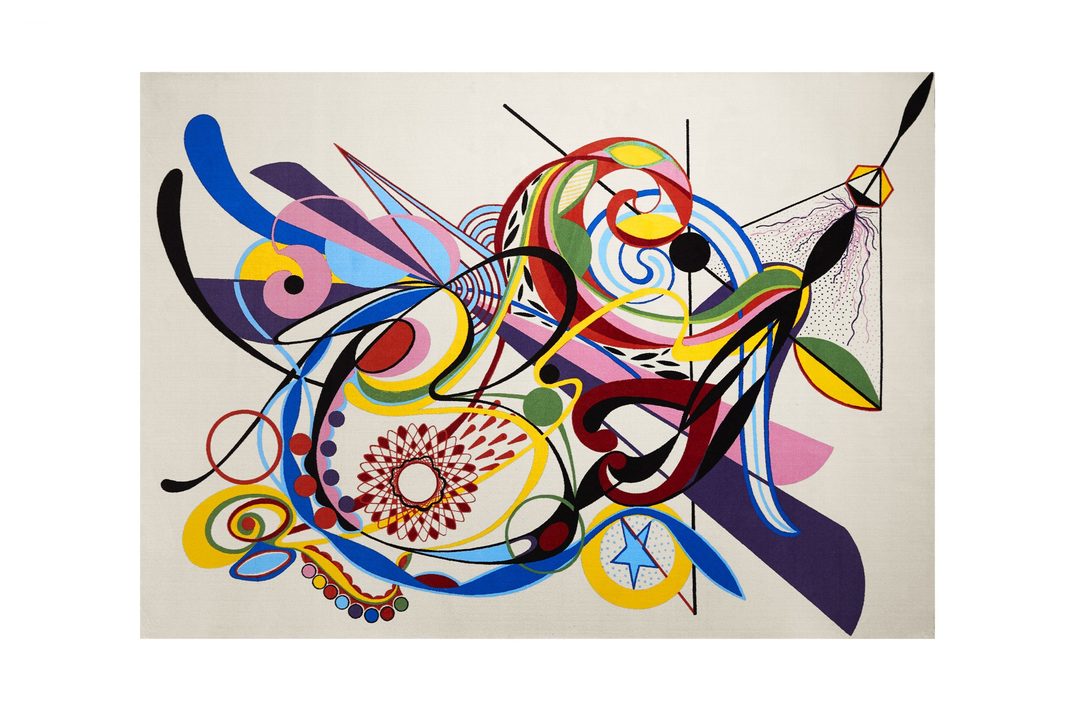 Four rug designs complete the collection. Three of them include original drawings by Joana Vasconcelos, reproduced in flamboyant hues by printing process: two rectangular renderings with a black or light background, and a circular design.

The fourth design is tufted and embodies certain codes of the artist’s artworks: organic, colourful and captivating shapes create an original form, their relief is brought to life by varying thicknesses contrasting against the black background. 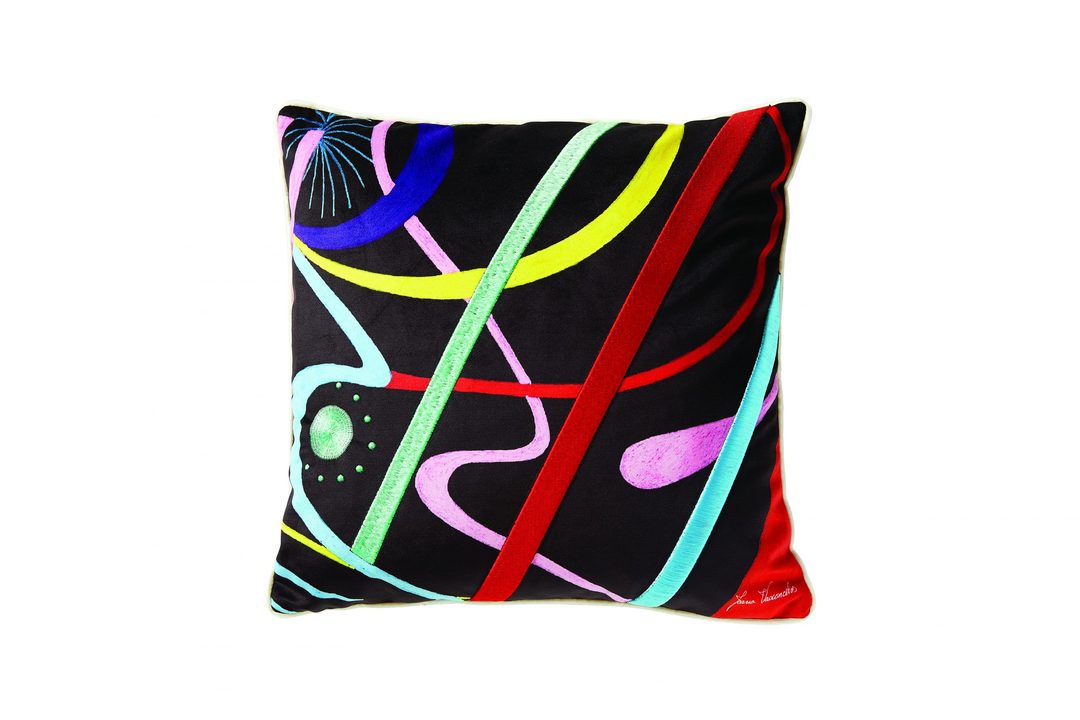 The collection of cushions includes patterns from the artist’s original designs, printed and embroidered, with white or black backgrounds. Each available in three sizes, for a total of six different designs, this collection reflects the fantasy and chromatic exuberance emblematic to Joana Vasconcelos’ work. 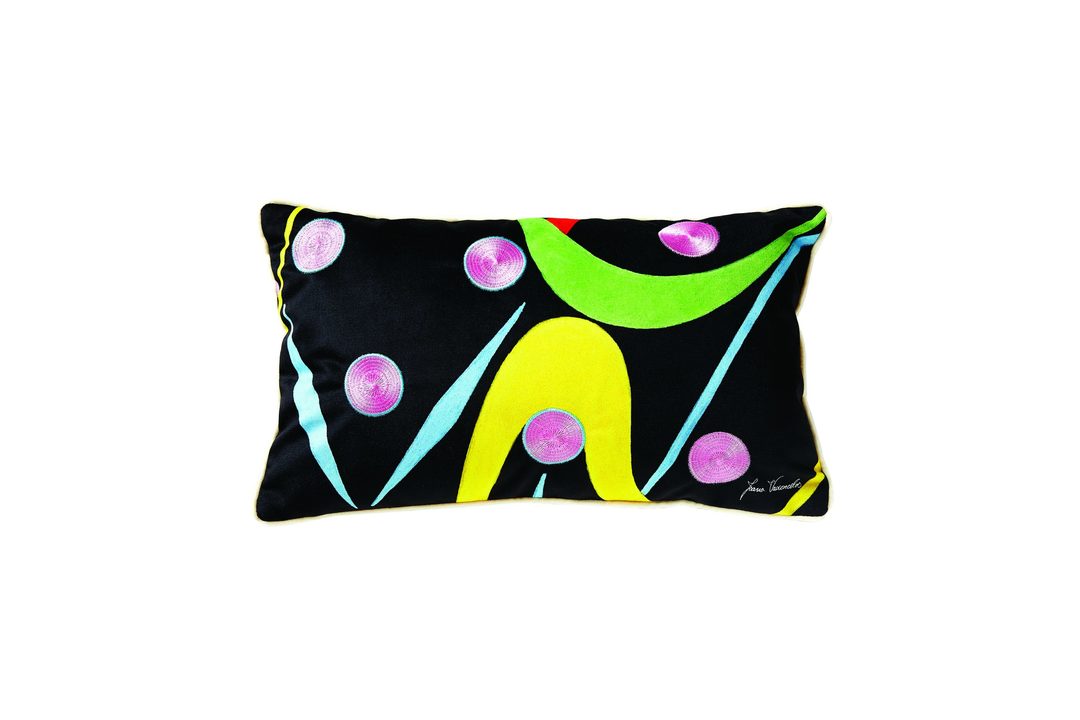 Says Joana Vasconcelos: ‘When I look at these pieces with their curves and winding lines, I see a series of shapes meant for interiors. I wanted to call on the end user’s creativity, I wanted them to feel free to compose with the modules and the choice of colours. I designed these pieces with the hope that people would make them theirs, play with them, while preserving the importance of comfort, and a sense of flavour and joie de vivre.’ 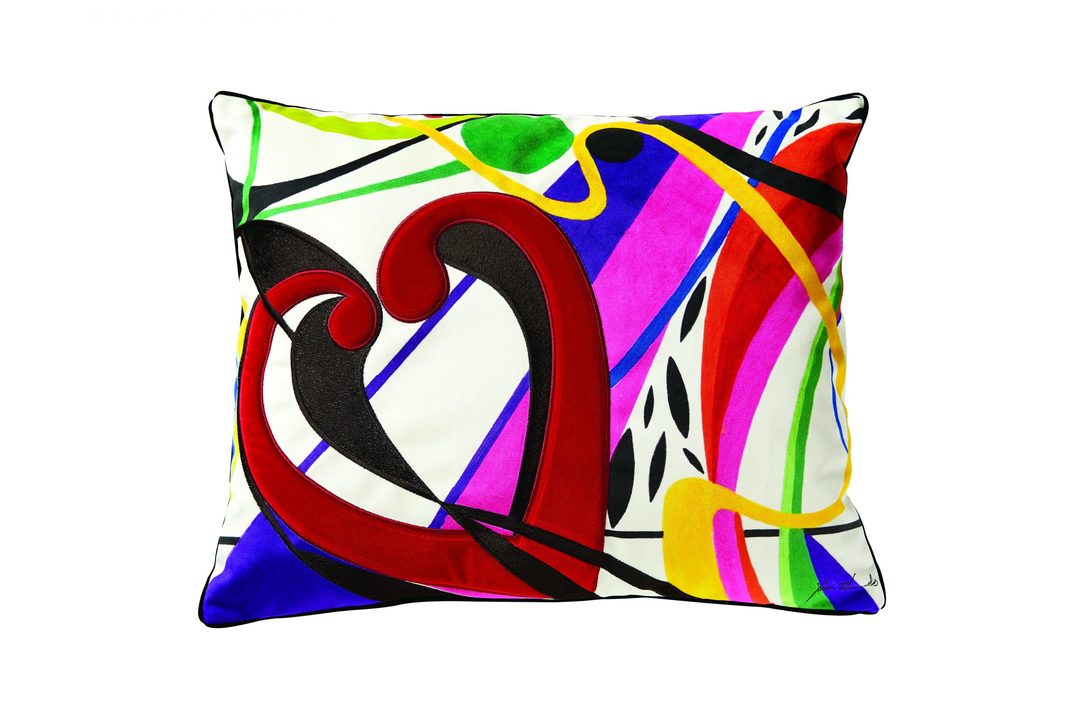