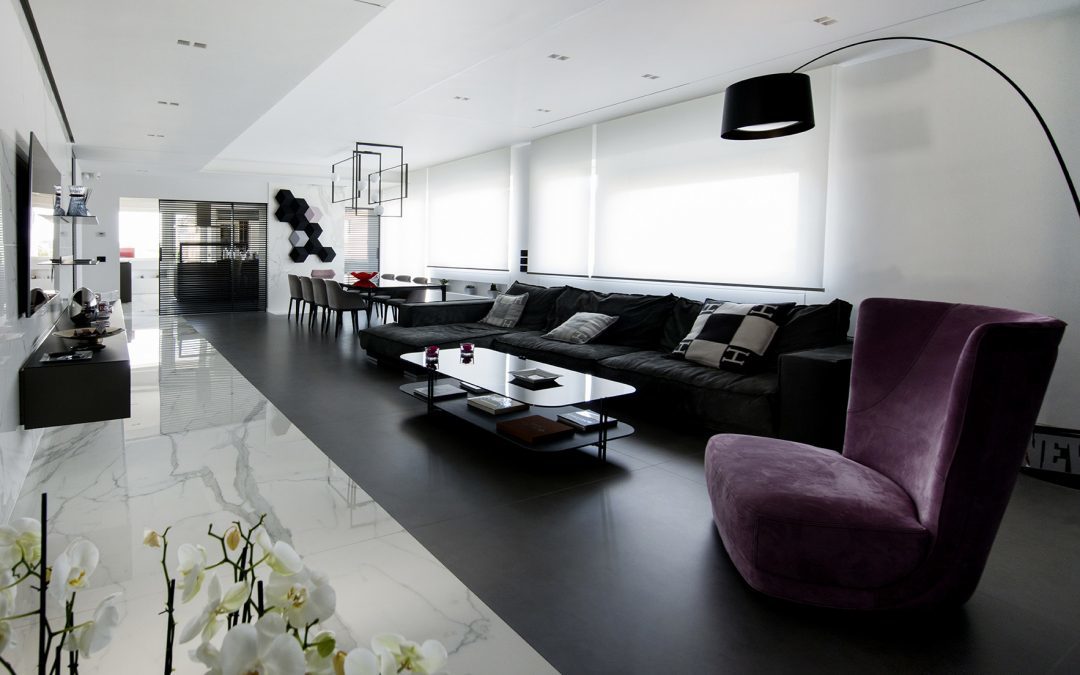 When leading architects Roberto Bassignani and Stefano De Vecchis were asked to create a design concept for a sixth-floor apartment in central Rome, Il Fascino Dell’Eleganza, the client had a highly specific, overall vision.

Principally, they wanted to create a home with a distinctive and original aesthetic. The space would simultaneously pay homage to the city’s classical architecture but also reference the clean lines and monochrome colours of contemporary design. Yet, bringing a natural look into the space was also a high priority for the client. Despite this being a bustling city centre, they wanted to feel as if they were surrounded by the natural world.

They adopted a holistic approach, with the intention of every aspect of the build embodying their philosophy. This meant the materials used in the construction would need to be 100% natural whilst also reflecting the client’s idiosyncratic requirements.

For the architects, it was the start of a fascinating design journey which would ultimately lead them to specify Neolith for all the project’s surfacing requirements.

Everything specified had a ‘wow factor’, impressing the client while also offering long-term value. There was no room for gratuitousness, as the brief had a strict caveat from the outset, expecting a visually striking but low maintenance interior.

Marble had initially been considered as it’s both natural stone and synonymous with the architecture of the local area. Its relative expense, however, particularly for the scale of the project, and low resistance to wear and tear ruled it out.

Bassignani and De Vecchis consulted stone specialist Domus Marmi Srl, who introduced them to Neolith, a market-leading brand of Sintered Stone. As the architects explain, ‘When we first saw Neolith, we were immediately drawn to the finesse of the detailing. It really looked like authentic Carrara and Nero Marquina marble. We immediately overcame our initial challenge of finding a high resistance, marmoreal-effect surface.

‘Furthermore, the composition of the stone is 100% natural and its performance qualities are unrivalled. It perfectly balances style and substance. As such, it became the number one choice for the apartment’s surfaces.’

From that point on, the desire to use Neolith throughout the whole space heavily influenced what would become the final concept. Looking to incorporate a modern twist, the architects developed the idea of contrast and stripped the design right back to create a minimalist look. 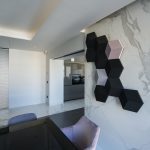 The colour scheme was an important consideration. ‘We worked with the clients each step of the way,’ the architects explain, ‘taking them to Domus Marmi’s depot to choose appropriate colours to match their taste. They were captivated when they saw the full slabs and also impressed with Neolith’s CLASSTONE range, particularly the true-to-life veining found in the Estatuario patterned surfaces.’

The interior was planned on a grand scale, with the dimensions of traditional Italian palazzo apartments in mind. Bassignani and De Vecchis worked closely with fabricator Rocco Contaldo of Artistic Posa Srl to deliver rooms which were spacious and airy, allowing for the maximum amount of natural daylight to flood into the interior.

Neolith’s distinctive Estatuario Polished in 6mm was chosen for the expansive living room and, subsequently, for the floor and wall cladding in every room throughout the residence. 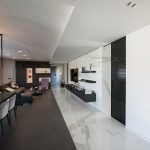 The brilliant white of the slabs, shot through with extraordinary grey veining, gave the interior an original, distinctive look. The architects were drawn to two different formats, Estatuario E01 and Estatuario E04 as they particularly appreciated the striations on each of these patterns. However, this choice was to present a daunting task to the fabricator as construction began.

Contaldo and his team worked painstakingly and meticulously, aiming to match the various, incongruous veins between formats to guarantee a seamless flow of the stone’s striations.

According to Bassignani and De Vecchis, ‘The beauty of working with Neolith is that it has an unrivalled degree of flexibility and, through careful cutting and shaping, we guaranteed the desired effect of organic continuity of the veining.’

To deliver the essential elements of contrast and offset the polished Estatuario, dark grey Pietra di Piombo was chosen. With a soft, silky finish it created points of differentiation when placed in tandem with the white, marble-effect surface.

Furthermore, lighter Pietra di Luna Silk was chosen for the balcony, complementing the other colours used for the flooring while establishing a distinction between indoor and outdoor areas.

For each of the property’s three bathrooms, the client wanted a trio of individual looks, which would each evoke the overall feel of the rest of the apartment. 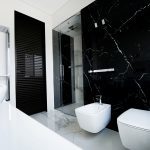 For the master bathroom, the client’s decision to specify Nero Marquina Polished as the principle surfacing material was immediate. Entranced by the shine of the slab, the rich depth of colour and glossy smoothness of the finish, they envisioned it as the antithesis of the dominant Estatuario, and as such the perfect pattern to offer a surreal, monochromatic contrast.

Tobacco brown Pulpis Polished was used for the guest bathroom. Its gentle, warm tones create a refined and sophisticated look, fostering a relaxing atmosphere. Say the architects, ‘When you enter this space, it’s like stepping into a work of art. Every single element has been designed with Neolith in mind.’

Finally, the last bathroom, intended for children, was envisaged with a low-impact palette in mind. Pietra di Luna Silk and Lava were chosen to create a cleaner, more homogenous space. A completely different environment to the rest of the property, it further added to the overall concept of colour contrasts. 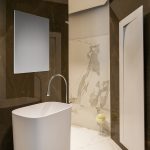 Summing up, Bassignani and De Vecchis comment, ‘As you can see, the finished space is more Pardi than Panini, but it maintains a playful reference to the rich heritage of the apartment’s setting. We regard Il Fascino Dell’Eleganza as one of our finest works, perfectly showcasing our collaborative approach and how we bring the client in at each step of the design and construction journey. Entering this apartment is to be immersed in a mesmerising mélange of art, classicism and modernity.’

They continue, ‘We could not have achieved such a singular and imaginative look without Neolith. Both Domus Marmi and the Neolith team were incredibly helpful throughout the process and their input helped us achieve a brilliant result.’