Neolith® – The Secret Ingredient for a Modern Kitchen 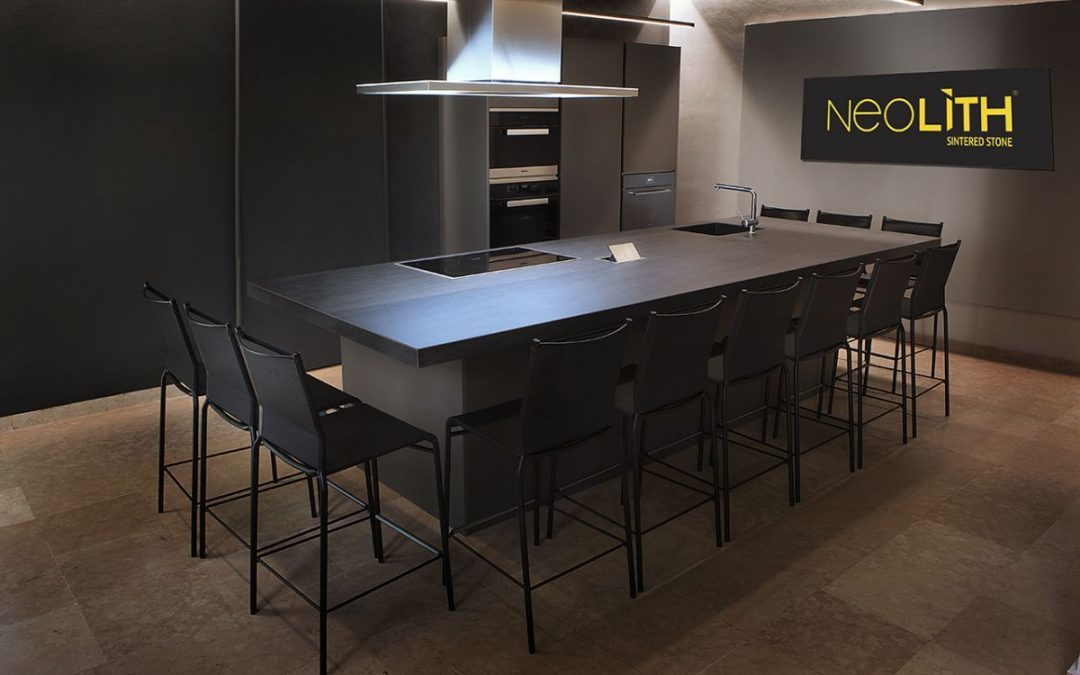 Some children dream of being astronauts, explorers or artists. From a young age, Jean Pierre Pastor knew he wanted to be a chef. Inspired by his mother’s great cooking, he cultivated a passion for food early in life and ultimately realised his dream: opening his first restaurant in 2000, La Fata Bema.

Pastor opened his latest destination, Meltemi, in Northern Italy in early 2016. Named after and inspired by the northern winds of the Aegean Sea, there he sets himself apart from the local competition by offering a menu comprised strictly of seafood dishes. A contrast to traditional cuisine of Parma, which is very meat and dairy heavy, his playfully unusual offering has been welcomed in the area.

Pastor’s appetite for quality cuisine, however, is not restricted to cooking. Shortly after opening Meltemi, he expanded it to include a cooking school, to provide a creative space where the public can participate in his passion. Pastor describes: “The cooking school is for people who wish to learn. It’s not for professionals, but for people who want to have a good time cooking, trying out and discovering.” 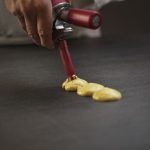 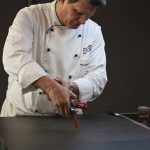 From the outside, Meltemi blends into its surroundings. It is a historic building in a very old city. Just across the road, the medieval Palazzo Tirelli boasts a fifteenth-century brick façade. Pastor, however, opted for a more contemporary kitchen, in contrast with the surrounding architecture.

Alongside the benefits of up-to-date appliances, Neolith worktops deliver a range of advantages for both experienced and beginner cooks. From slicing and dicing to plating and presenting, the Sintered Stone is at once chopping board, trivet and backdrop.

Pastor explains: “We have chosen Neolith because the surface is easy to clean and very hygienic. It doesn’t stain, it doesn’t scratch and we can put hot pans on it. The product doesn’t change, so we know it will look as attractive no matter how many dishes are prepared on it.” 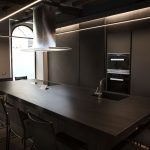 Dishes in the dark

While the kitchen is typically the realm of chefs, this cookery school is for everyone. As a space that has new people constantly coming into it, including novices, a relaxing and attractive décor

in which visitors feel comfortable to learn and make mistakes was crucial. While many professional kitchens opt for a mixture of the traditional steel and white, Pastor has cultivated a warm, dark atmosphere, achieving a more tranquil ambience.

Neutral walls and deep grey cupboards are complemented by understated lighting while a metallic, illuminated extractor fan makes a dramatic statement, drawing attention to the large kitchen island in the centre of the room. 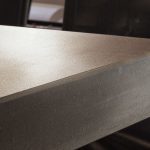 To complement the existing décor, Pastor chose dusky Neolith Basalt Black for the cookery school’s substantial worktop. In line with the current trend for inkier tones, the fine-grained igneous pattern has an enduring appeal that will see the culinary space adapt seamlessly to changing fashions and tastes.