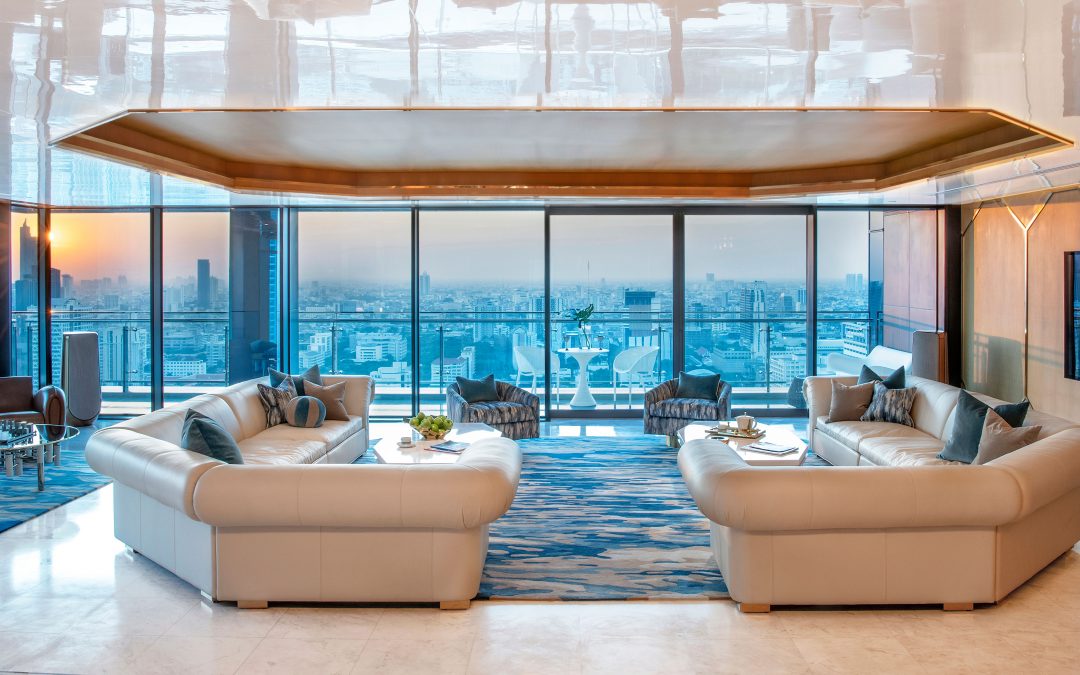 Standing next to the iconic St Regis hotel located on the prominent Rajadamri Road in the commercial district and heart of the city of Bangkok, this luxury penthouse features stellar views of the city skyline and ultra-polished fixtures and details. The pad was recently awarded Best Apartment Design & Best Bathroom Design (Thailand), by the International Property Awards 2020, which makes sense as the idea of ‘craftsmanship’ has been woven into many of its details. 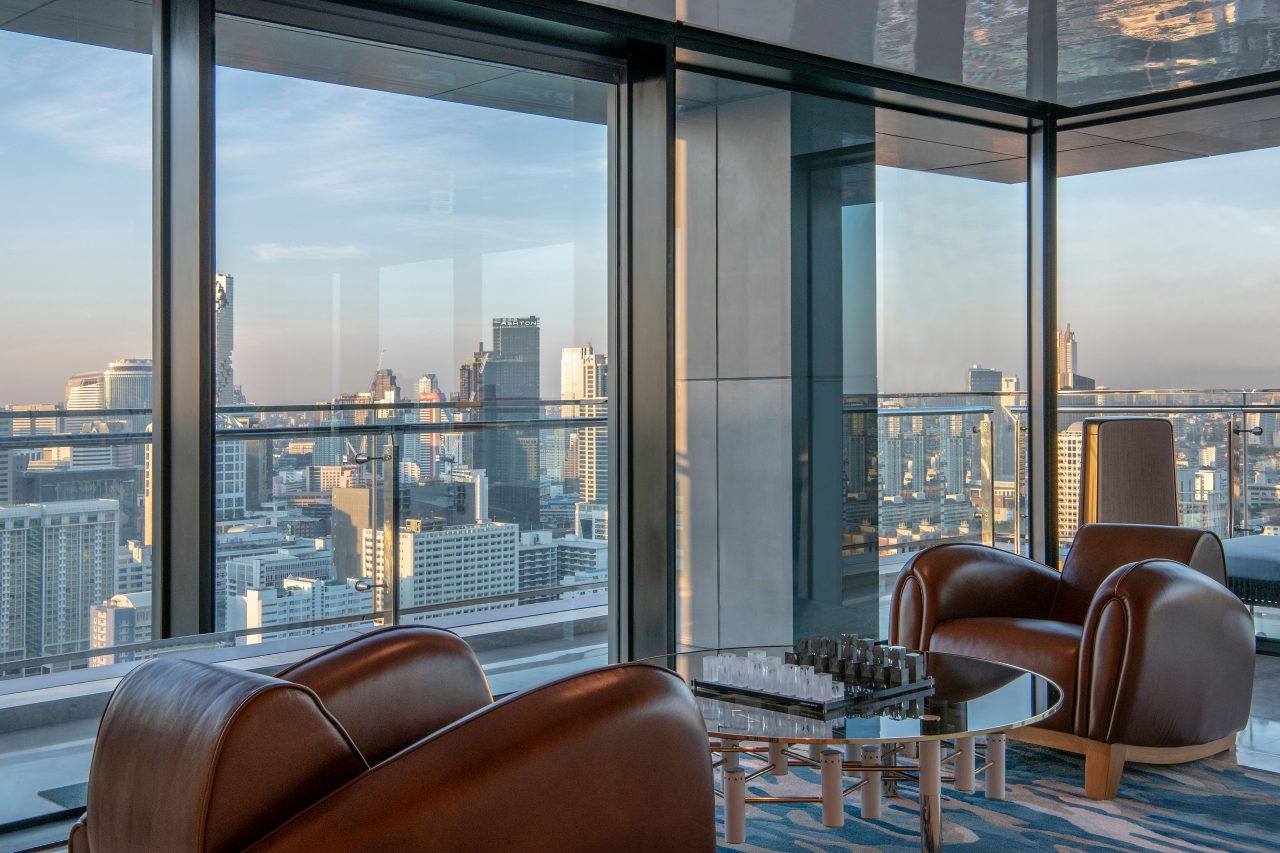 Since World War II, Bangkok has grown with unprecedented rapidity, which caused problems with transportation, communication, housing, water supply, drainage, and pollution. Tourism rose in importance during the Vietnam War, when the city became a popular destination for U.S. military personnel. Those responsible for modernising the metropolis are coping with complexed problems which may suggest the appropriateness of its official emblem: the God Indra seated atop a sacred white elephant, the four tusks of which denote its celestial status and its ability to accomplish the impossible.

It is the only cosmopolitan city in a country of small towns and villages and is Thailand’s cultural and commercial centre. The inner city has become more institutional and commercial and the outer city more residential and industrial. Walled Buddhist temples and monasteries called wats, often sumptuously ornamented, serve as focal points for religious, cultural, and commercial life. There are more than 300 wats or temples, representing classic examples of Thai architecture. Most are enclosed by walls. Many wats have leased a portion of their grounds for residential or commercial use. 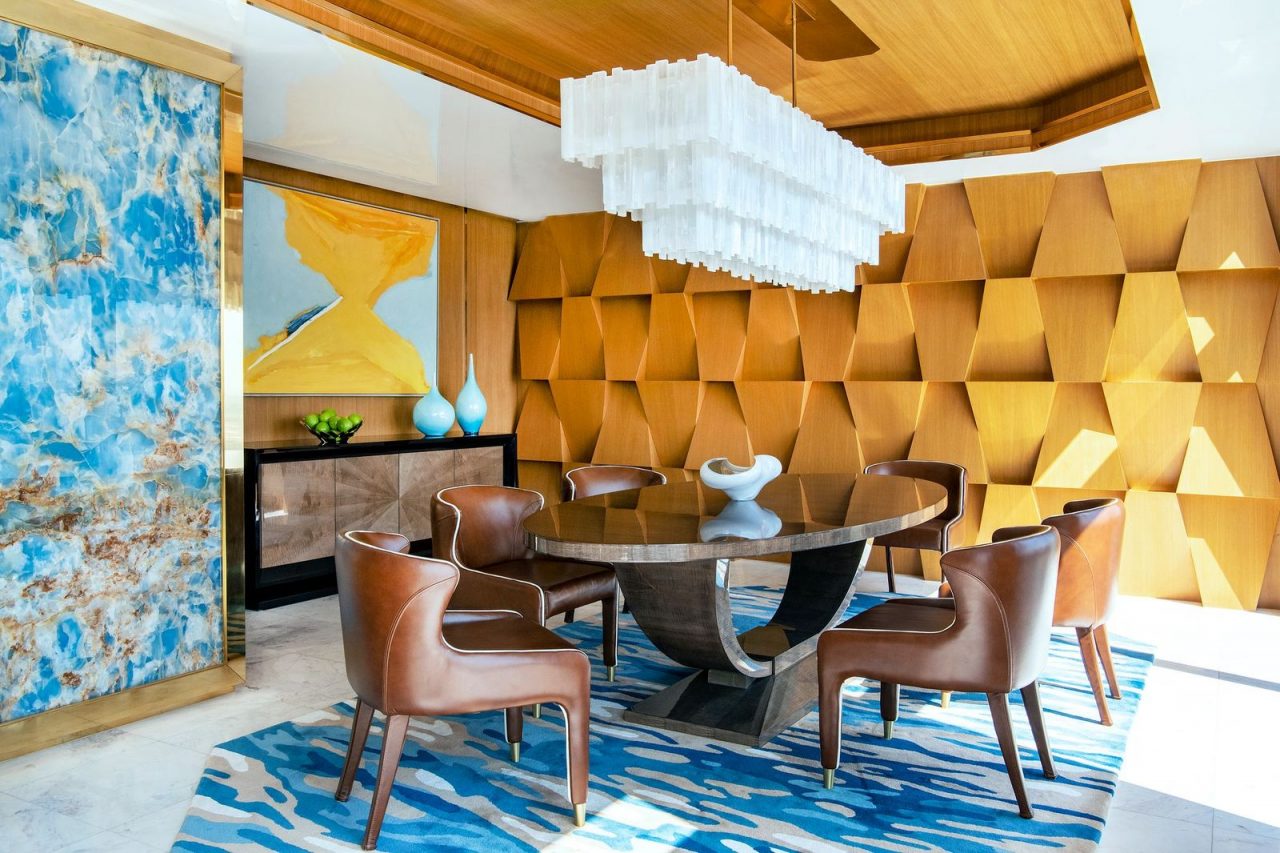 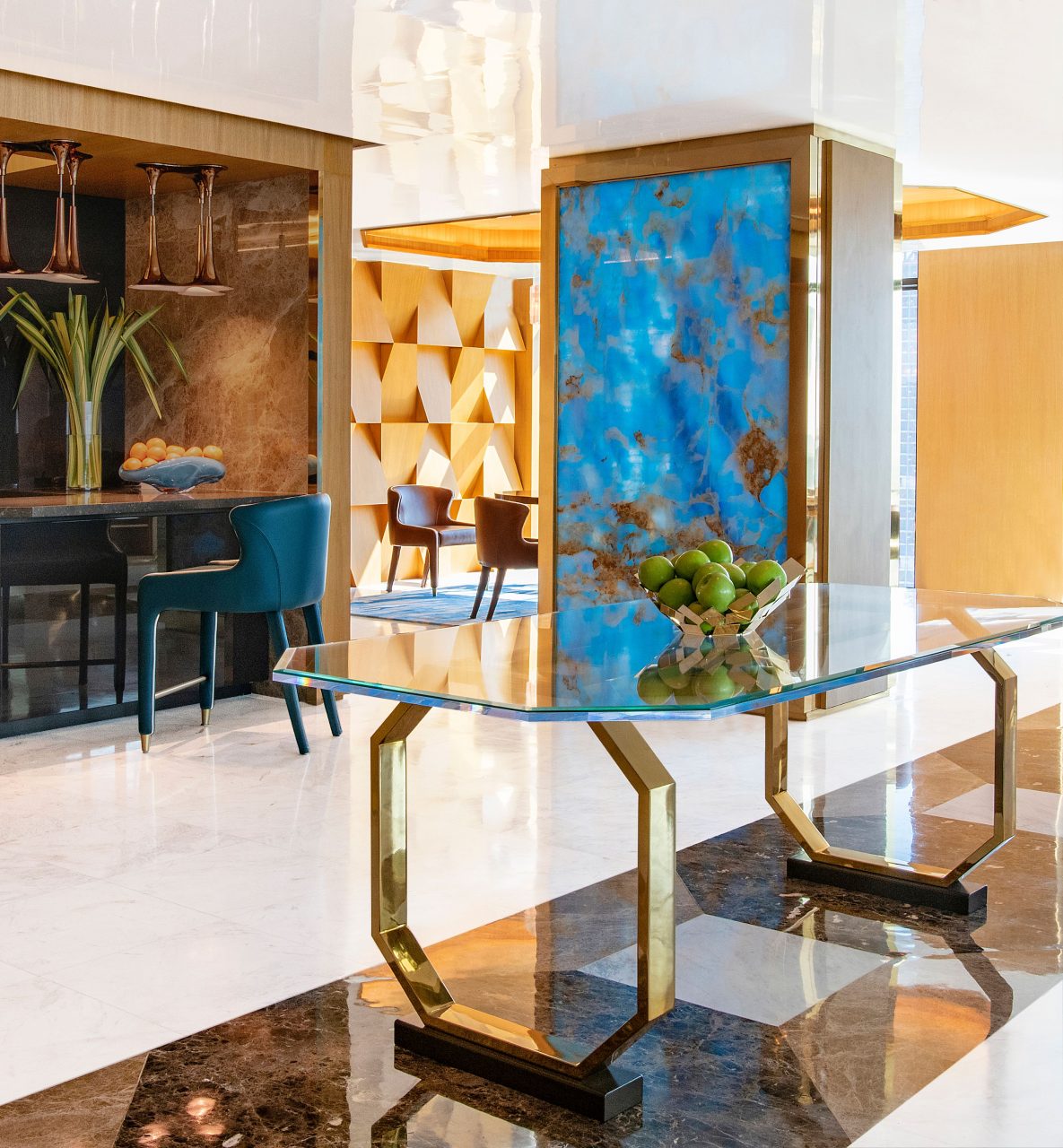 Founded by Nikki Hunt, Design Intervention is a multidisciplinary studio based in Singapore that’s famous for its meticulously bespoke projects. Says Nikki: ‘We do not have a house style. Our portfolio is as diverse as our clients are. We believe that good design improves quality of life, affects mood and invokes a sense of well-being. Our mission is to enhance the lives of our clients by creating homes that are uniquely tailored to their lifestyle, aspirations and personalities.’ The team of 24 is made up of 12 different nationalities – each bringing their own unique experience to the Design Intervention team.

Nikki was born in the UK and studied Economics at the London School of Economics before moving to Asia in 1990. She lived in Hong Kong and Jakarta, Indonesia before settling in Singapore. Andrea Savage is an Australian national who studied design in London and who joined the company as partner in 2010.

Design Intervention has been listed six times in Interior Design Review’s list of the world’s 100 top designers; landing a position on the list is sought after by international firms, and Design Intervention is the only Southeast Asian studio to have earned a spot on it. With a belief that good design begins with empathy, Design Intervention invests vast amounts of time developing an in-depth understanding of the client and in assessing the sites. Using an approach that is as psychological as it is creative, the sense of contentment and well-being within each living environment is a high priority for the firm.

The owner of the penthouse featured here is a single lad in his 30s who dreamt of having a refined bachelor pad with all the accessories of a contemporary Hollywood set. He invited Nikki Hunt, founder of the award-winning studio Design Intervention, to conceive a home space with supreme finishes that enhance the stunning available views. The result, a skyline with magnificent 270-degree vistas of Bangkok.

It was completely tailored to the taste and needs of this special client. ‘The client didn’t want to walk in and see items that he had seen in other homes, so much of what we included was specially designed for him,’ explains Nikki Hunt. The apartment’s colour palette mostly features earthy tones, paired with the subtle use of blue to allude to the sensation that the penthouse is perched and floating among the clouds. 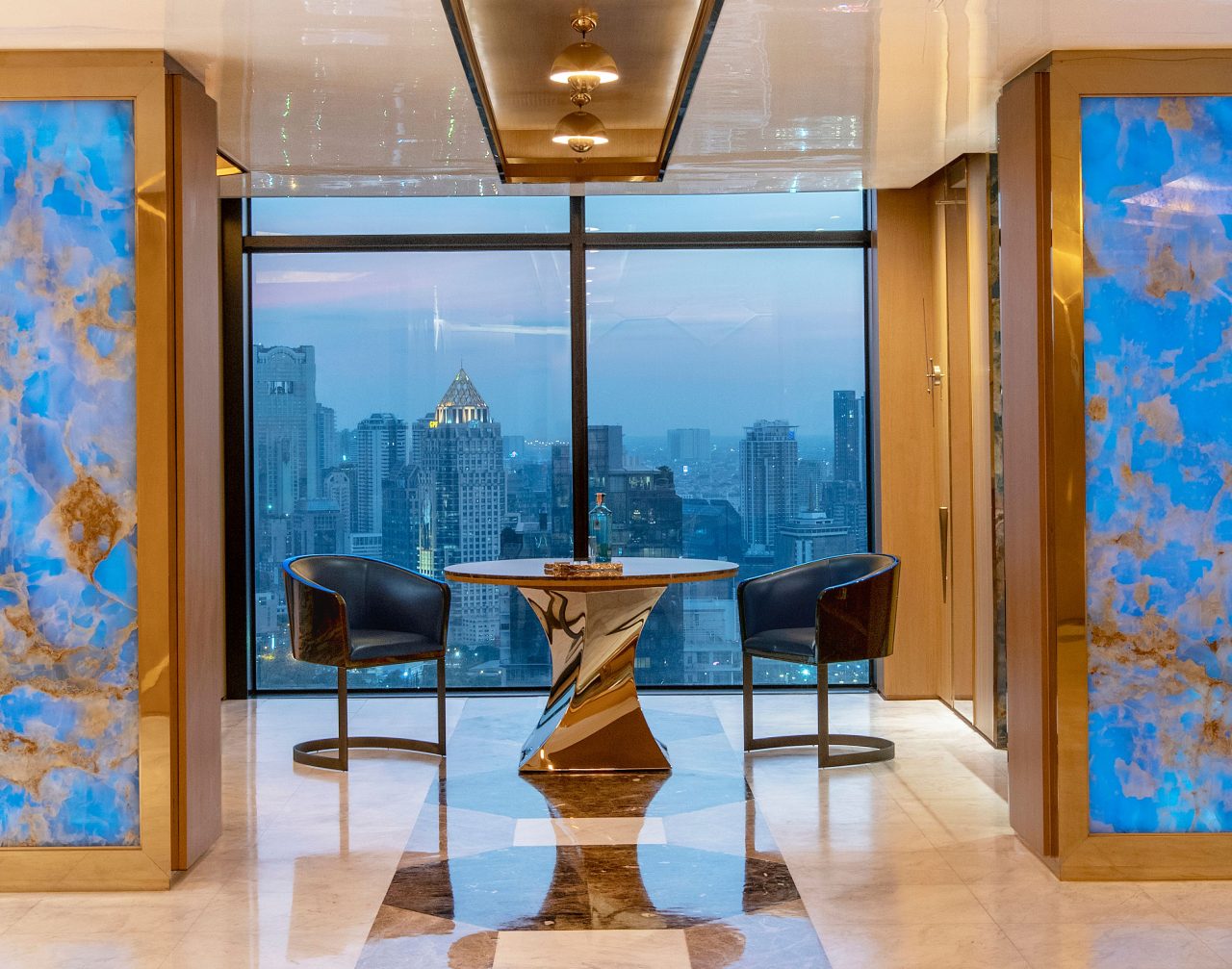 The Konstantin centre table was a natural fit for the custom armchair whose design was inspired by the Bugatti Type 57, one of the client’s favourite cars. Inspired by the iconic Ike lighting design, the elegant feel of the mid-century centre table follows as if born of the savviest of impulses to balance. Featuring a structure made entirely in gold plated brass, Konstantin also features beautiful glossy lacquered details that can be customised further. 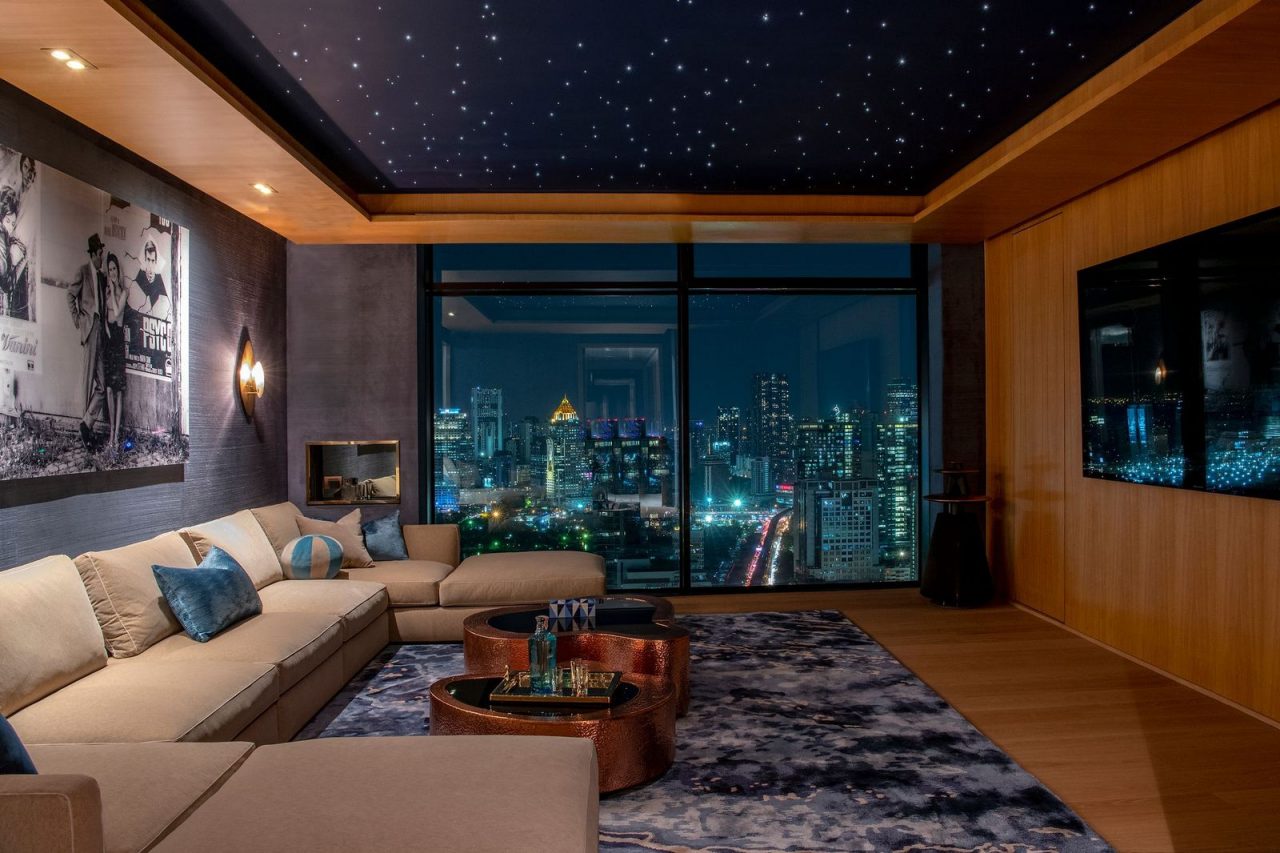 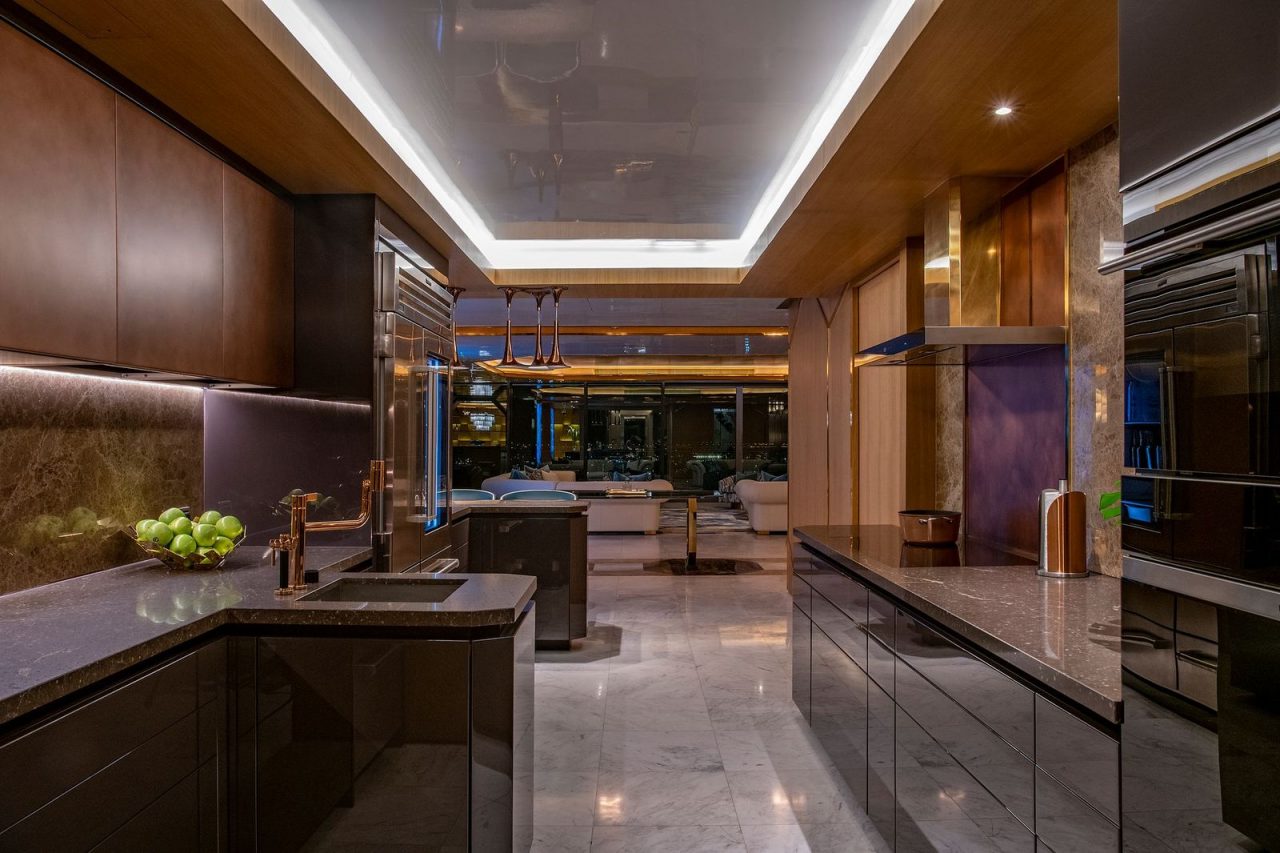 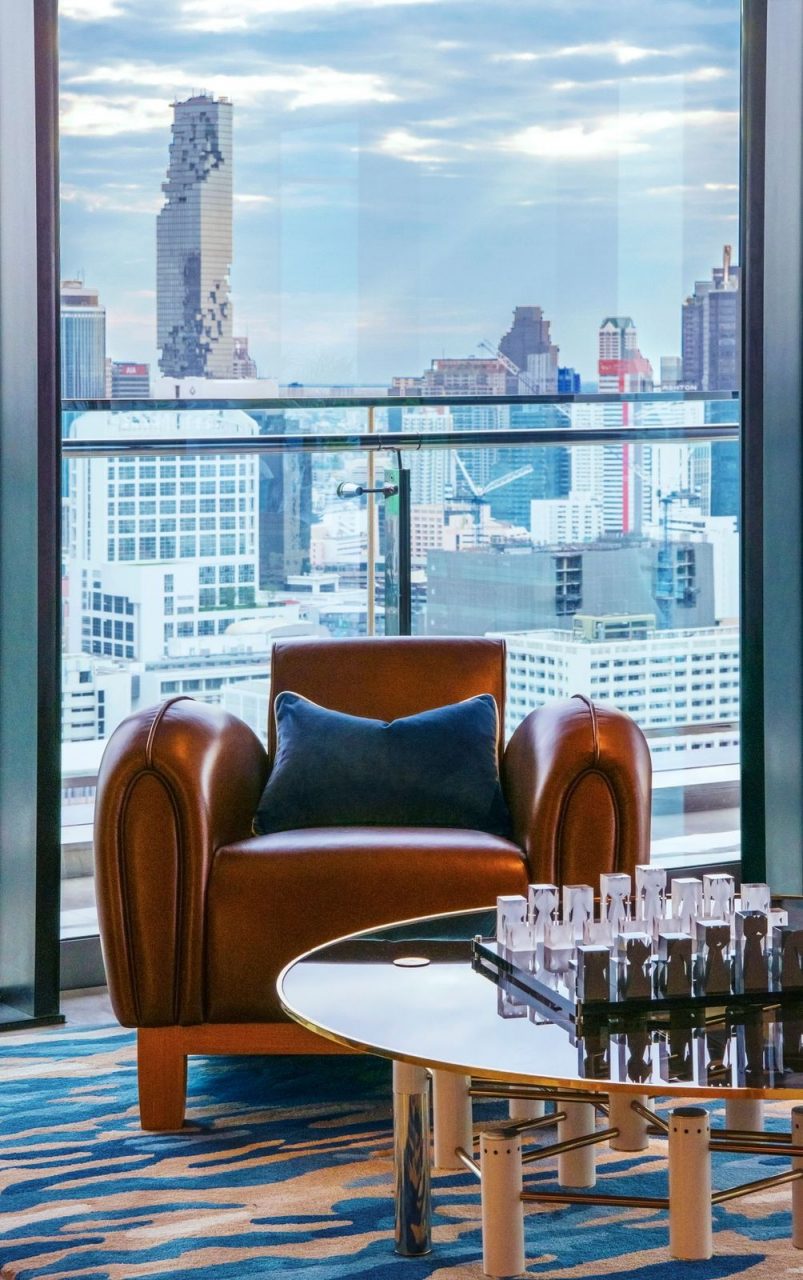 A turn to texture and layers add warmth and atmosphere. All spaces here feature statement pieces. ‘Bespoke design is certainly a hallmark of what we do. With international brand names so easily available, originality has become the new luxury, and bespoke furnishings can give a unique signature to a home,’ adds Nikki. Many of the furnishings – including the sofas in the living room, the dining chairs, as well as the console in the entryway – are custom-made, designed and manufactured by Design Intervention and other international brands such as Essential Home. 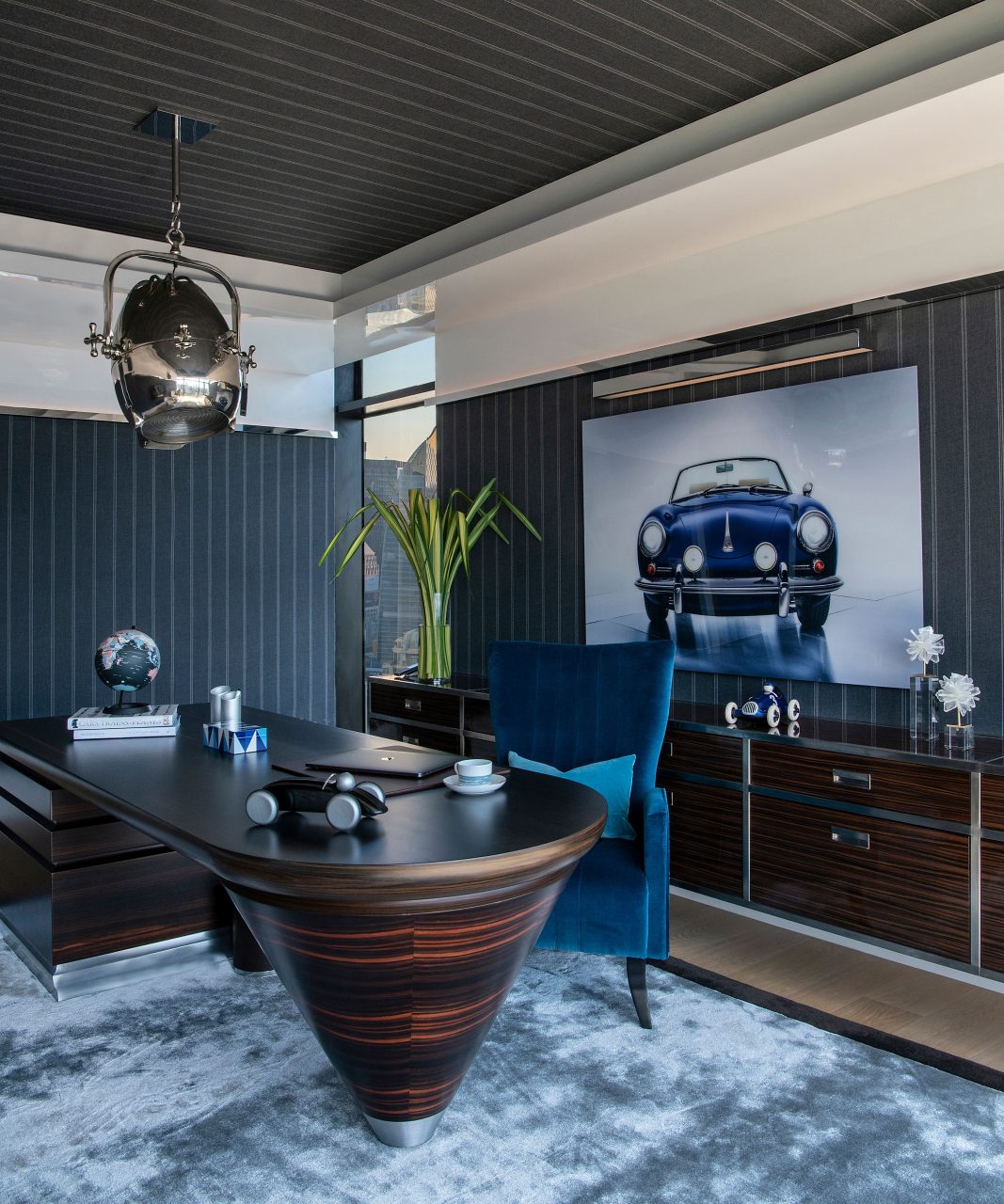 According to one interpretation, the name Bangkok derived from a name that dates to the time before the city was built – the village or district (bang) of wild plums (makok). The Thai call their capital Krung Thep, which is the first part of its mellifluous and lengthy official name meaning: the ‘City of Gods, the Great City, the Residence of the Emerald Buddha, the Impregnable City (of Ayutthaya) of God Indra, the Grand Capital of the World Endowed with Nine Precious Gems, the Happy City Abounding in Enormous Royal Palaces Which Resemble the Heavenly Abode Wherein Dwell the Reincarnated Gods, a City Given by Indra and Built by Vishnukarm’.  The abbreviated name Krung Thep is often translated as ‘City of Angels’. 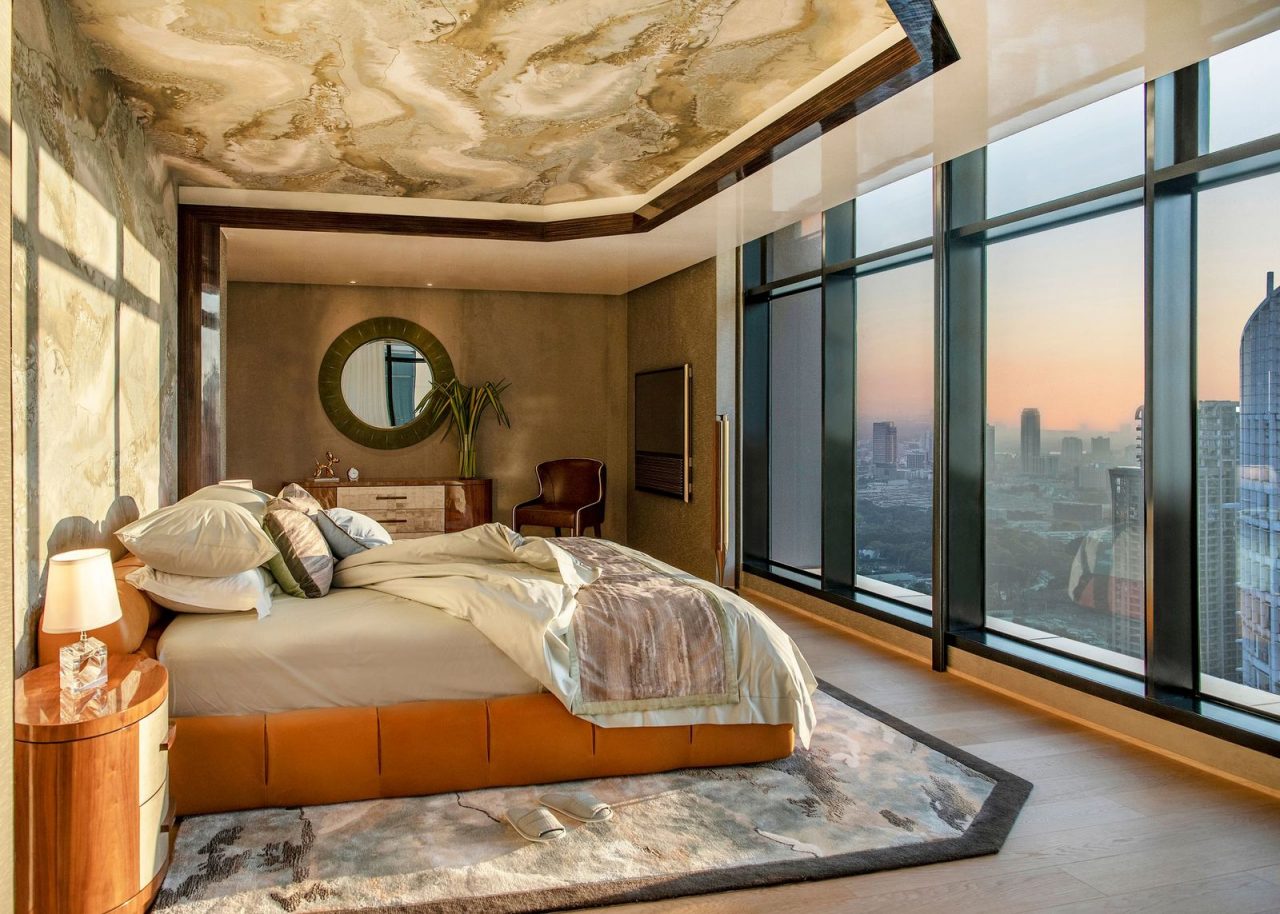 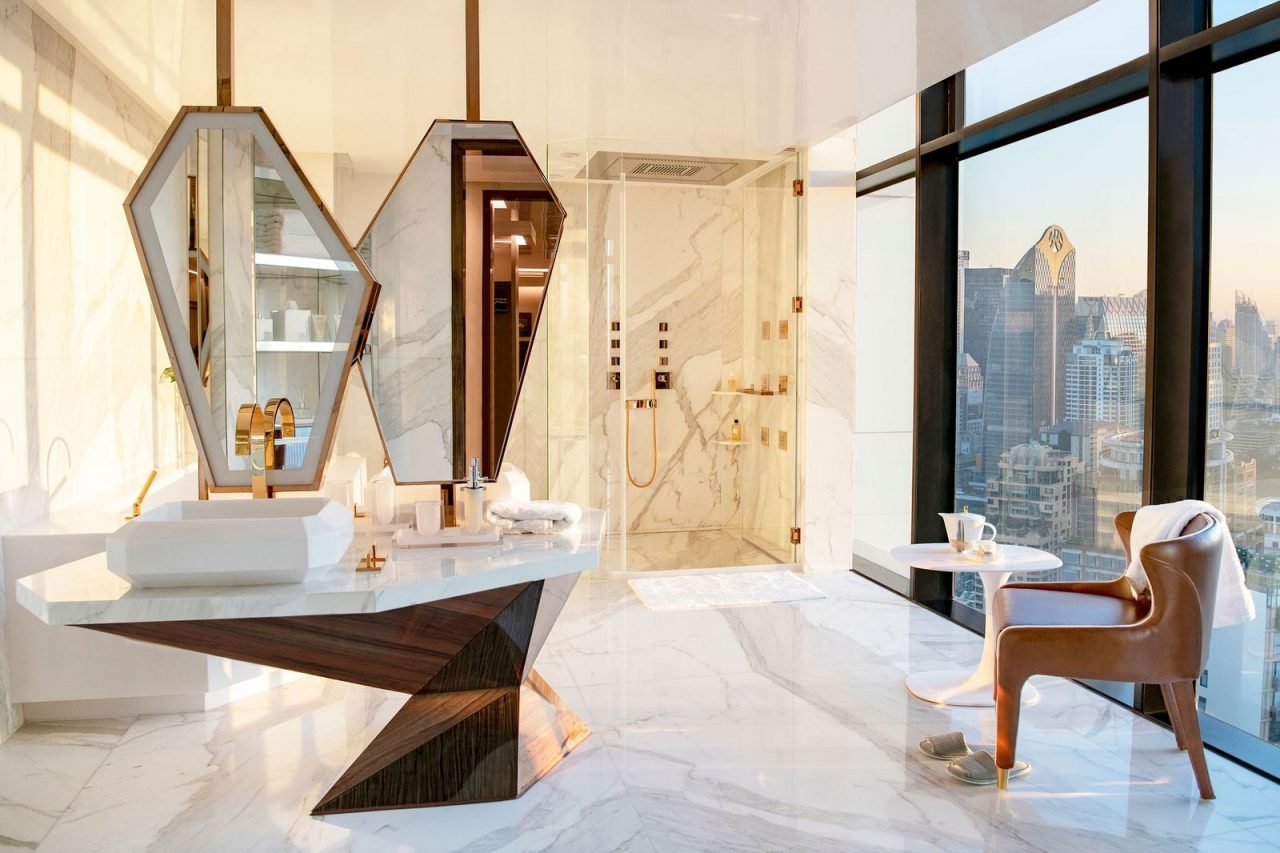 The city continues its role as one of Asia’s most important tourist, financial, and commercial centres. Its uniquely Thai character, while perhaps diminishing, provides a stirring backdrop for Bangkok’s cosmopolitan image.