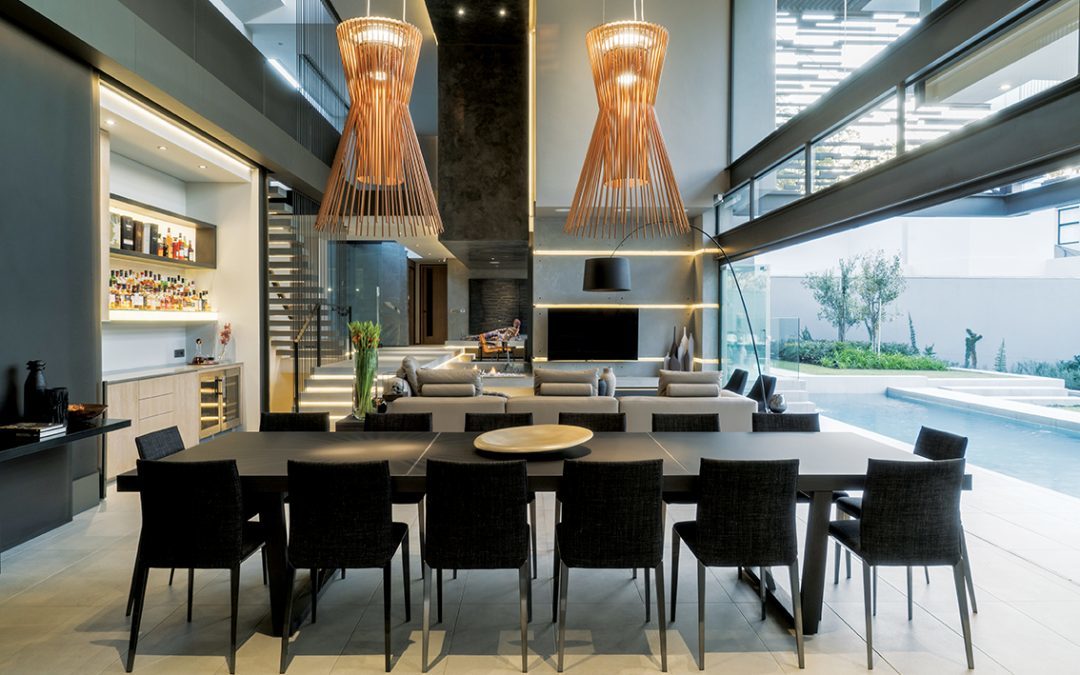 This light-filled, unique and eco-friendly home is situated in the verdant suburb of Inanda with views of the Sandton skyline to the north. The style of architecture is best described as contemporary industrial and combines stark elements with warmer finishes within. A synergy that succeeds in imparting a homely ambiance overall. The land was a vacant portion of a sub-division of the Inanda Polo Club and the stand size is just over 1 500 square metres, with the undercover built structure being 940 square metres. 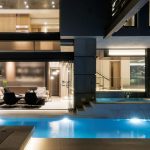 The lanai and brise soleil on the north side cantilevers unsupported by columns, partially over the pool. It consists of: seating area, dining area and bar / barbeque, seamlessly connected with the living spaces and kitchen. 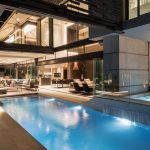 It consists of: seating area, dining area and bar / barbeque, seamlessly connected with the living spaces and kitchen.

Says architect Rudolph van der Meulen: ‘The brief from our clients requested a four bedroom house, that would be designed in such a way that they would be able to get the best views of the Sandton skyline and enjoy northern views towards Waterfall City. Other prerequisites were to take full advantage of the Gauteng climate and capitalise on the eco energy technology that’s rapidly expanding in South Africa. 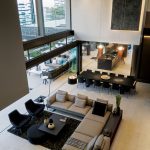 The double volume metallic bronze pendants from Foscarini were installed to bring a sense of scale to the dining area. 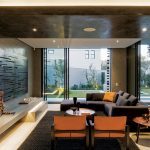 The contemporary interior was inspired by the architecture, creating a seamless flow between interior and exterior.

‘From the outset, we focused on traditional climate control measures – like sun control – beginning with simply orientating the house north and screening off west and east sun. On this basis, we designed the floor plan to complement a seamless indoor / outdoor lifestyle; taking into account the family needs, daily rituals and most importantly a focus on the views. This was enhanced by a high-tech geothermal heating and cooling system that services domestic hot water supply, air-conditioning, underfloor heating and the swimming pool heating. This system was seamlessly integrated with the pump room hidden in the basement. Lastly, the entire roof was clad with photovoltaic solar panels that assist with lighting and the electrical footprint of the house. 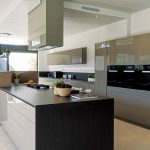 The kitchen and built-in cupboards were manufactured by Dada and Porro respectively, and imported from Italy. 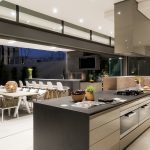 ‘A notable challenge was the engineering aspect of the building. The lanai / brise soleil on the north side cantilevers out 18 metres by 6 metres partially over the pool, and is unsupported by columns. This – a feat in itself – required clever engineering to support the structure from the top down, rather than from the ground up.

‘It’s important to note that although the spa, pool and water feature are three separate bodies of water, the effect we wanted to create was one interconnected system with each flowing into the next.’ 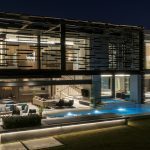 Due to the close proximity of the neighbouring stands, the aim here was to employ a unique approach to privacy. This was done by re-interpreting the use of I-beams with tubular steel cladding to create a screen around the house. Each section of the façade is a different size and pattern, according to how much privacy or view was required. The floating cantilevered I-beam structure supporting the square tubing screens challenged engineering principles. In order to achieve an impression of weightlessness the architects turned the steel façade into a gravity-defying, sculptural adornment, which also supports the concrete roof over the lanai. 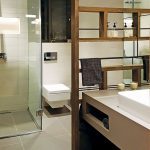 Custom-made horizontal timber screens finished in a lime-wash are used to good effect in both bedroom and bathroom. 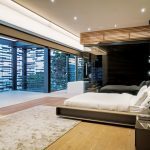 In the main suite, emphasis was placed on finishes with an abundance of acid-etched glass doors and back painted glass wall panels. Tom Dixon Etch pendants throw shadows across the room, adding to the overall effect. 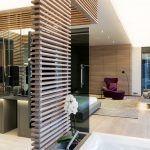 The main ensuite can be concealed by sliding smoked glass screens.