The New Audi A7 Sportback: The Sporty Face of the Luxury Class 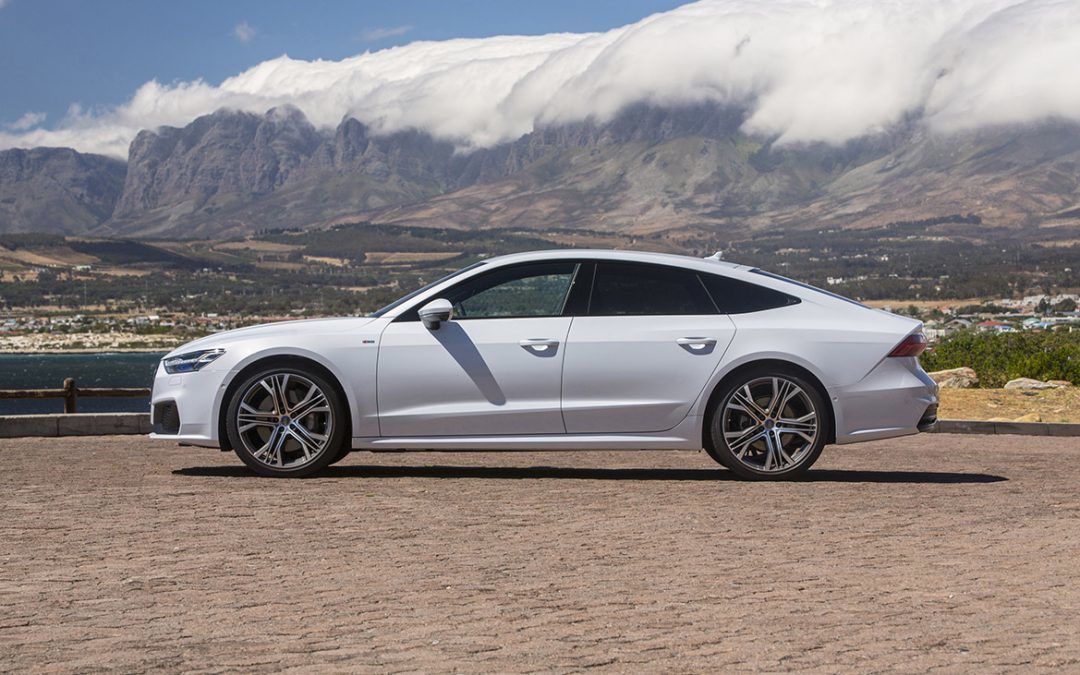 The A7 Sportback represents the new Audi design language to a great extent and delivers on the design promise made by the prologue studies. The four-door coupé sets standards in the luxury sedan class when it comes to progressiveness. It embodies a new style of Gran Turismo, with dynamic lines, digitalization, a sporty driving experience and a versatile space concept.

Dynamics at their most beautiful: the exterior design

The exterior of the A7 Sportback is a true expression of Audi’s new design cues. With large surfaces, sharp edges and taut, athletic lines, the A7 signals dynamics and progressiveness from every perspective.

Up front, the Singleframe grille, the narrow headlights, the boldly contoured air inlets and the flat front end convey at a glance the sportiness of the Gran Turismo. The headlights come standard in the HD Matrix LED version with dynamic turn signals and light design. 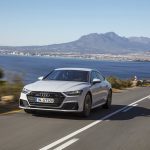 The Audi A7 Sportback is an athletic sculpture with a long engine hood, long wheelbase and short overhangs. Pronounced contours emphasize the wheels, which measure up to 21 inches in diameter, and reference Audi’s quattro genes. These genes determine the proportions of the vehicle’s body. The silhouette is defined by the dynamic roofline, which drops sharply toward the rear. Four figures delineate the sporty character of the large coupé: It is 4,969 millimetres long, has a wheelbase of 2,926 millimetres and is 1,908 millimetres wide, but stands only 1,422 millimetres high.

As with the previous model, the rear end is tapered like that of a yacht. The long luggage compartment lid terminates in a pronounced, curved lip from which an integrated spoiler extends automatically at 120 km/h. A flat light strip – a design feature common to all of Audi’s top models (as seen on the Audi Q8) – joins the rear lights, whose tail lights are made up of 13 vertical segments. When the doors are unlocked and again when they are locked, fast-moving light animations play in the rear lights and in the headlights, highlighting the big coupé’s dynamics while standing still. The progressive exterior design of the new Audi A7 Sportback is largely devoid of chrome. The paint range offers a choice of 15 colours, eight of which are new.

The optional S line exterior package further hones the look, with modifications to the radiator grille and the front air inlets, the sills and the front and rear diffusers. They are trimmed in gloss black and more strongly sculpted.

The interior fuses design and technology in a unique way. The interior of the new Audi A7 Sportback dazzles with its futuristic lounge atmosphere. With a large panoramic glass sunroof as standard, the interior lounge of the A7 brightens up. Its reduced, clean design language is based in a one-of-a-kind balance of tension and coolness. The horizontal lines and sleek instrument panel provide for a feeling of airy spaciousness. The centre console is oriented toward the driver, underscoring the Gran Turismo’s sporty character. Four key values characterize the interior concept: progressiveness, sportiness, intuitiveness and sophistication.

All colours, upholstery materials and inlays underscore the new aesthetic in the vehicle. Standard seats are available in Milano leather with an upgrade to a Sport seat or a S Sport seat that comes fitted with the sophisticated Valcona leather or the S embossing as part of the S line Sports package.The standard contour ambient lighting package traces the contours and subtly highlights the space in 30 different colours.

The 10.1-inch upper display (in combination with MMI navigation plus) is tilted toward the driver. With its black panel optics and framed in a graphite grey aluminium clasp, it almost disappears into the dashboard when switched off. The body supporting the clasp is itself a geometric sculpture. The display’s user interface appears as soon as the car is opened. In keeping with the interior design, the look is reduced and succinct.

The 4-zone comfort automatic air-conditioning system is another standard feature on the Audi A7 Sportback. The deluxe automatic air conditioning ensures optimum temperatures with a simultaneous increase in the feeling of space and fresh air. A defroster nozzle for windscreen and side mirrors is also included.

The new Audi A7 systematically continues Audi’s digitalization strategy of the Q8. The interior architecture melds seamlessly with Audi’s new MMI touch response operating concept. It replaces the rotary pushbutton and the conventional buttons and controls of the previous model with two large, high-resolution touch displays. 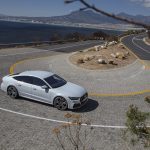 The driver controls the infotainment system from the upper display. Mounted on the asymmetric console of the centre tunnel, the 8.6-inch lower display provides access to the climate control system, comfort functions and text input. Drivers can rest their wrist on the automatic transmission’s wide selector lever knob.

Audi offers an optional head-up display that projects important information onto the windshield. MMI navigation plus also includes the Audi virtual cockpit with a 12.3-inch display as standard.

The MMI touch response operating concept features haptic and acoustic feedback and is as intuitive to use as a smartphone. Users hear and feel a click as confirmation when their finger triggers a function. With its logical and flat menu structure, the system allows fast access to the various vehicle functions, and it can also be personalized thanks to configurable and movable “favourites” buttons.

The optional voice control in the new A7 Sportback makes operation even more convenient. With MMI navigation plus, the natural speech dialogue system processes questions and commands with information stored on-board. 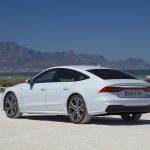 The new A7 Sportback comes standard with the MMI radio plus and MMI navigation plus with MMI touch response. The standard Audi phone box offers inductive charging for driver convenience and the Audi smartphone interface (also standard on the vehicle), allows for easy connectivity to Apple Car play and Android Auto. The Bang & Olufsen Premium Sound System is a standard feature on the new A7 and delivers fascinating 3D sound to the interior of the cabin. 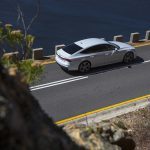 Handling and long-distance comfort: the chassis

The new A7 further extends its synthesis of sportiness and comfort. The optional dynamic-all-wheel steering, the new electronic chassis program (ECP) – the central controller for the chassis – and the updated air suspension make it even more agile, nimble and comfortable. The A7 is thus the perfect Gran Turismo: dynamic and agile on twisty country roads, yet comfortable on long highway stretches.

Many aspects of the front and rear axles have been developed from scratch. The standard progressive steering, whose generally sporty ratio becomes even more direct the further the steering wheel is turned, features a new concept for intensive road feedback. Mounted behind large wheels with improved rolling comfort are aluminium fixed-calliper brakes with discs up to 400 millimetres in diameter. Customers can choose between four suspension setups: a conventional steel spring suspension, the sport suspension that lowers ride height by 10 millimetres, electronically controlled damping and the self-levelling adaptive air suspension. 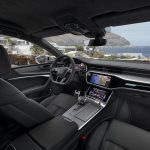 The top chassis-related innovation is dynamic-all-wheel steering. It combines direct, sporty steering response with unshakable stability, resolving the conflict of aims between agility and comfort. The steering ratio varies as a function of speed between 9.5:1 and 16.5:1 by means of active steering interventions at the front and rear axle. At the front axle, strain wave gearing is used to superimpose these in response to the driver’s steering input. At the rear axle, a spindle drive turns the wheels by as much as 5 degrees. At low speed, they steer counter to the front wheels to further increase the agility of the big coupé when parking or driving in urban traffic, for example. This reduces the turning circle at full lock by 1.1 metres. At 60 km/h and above, the rear axle steers in the same direction to increase straight-line stability and facilitate lane changes.

The driver can use the Audi drive select system to activate different ride profiles featuring a more pronounced difference between comfort and sportiness than in the previous model.

A powerful 3.0-litre turbocharged V6 engine with 250 kW supplies effortless cruising and overtaking power in the A7 Sportback. A standard 48V mild-hybrid system provides greater comfort and efficiency. It also helps to keep fuel thirst down to 6.8 litre / 100 km corresponding to CO₂ emissions of 154 grams. This new mild hybrid system (MHEV) uses a 48-volt primary electrical system. A belt alternator starter (BAS) works together with a lithium-ion battery and achieves a recuperation performance of up to 12 kW when braking. At speeds between 55 and 160 km/h, the four-door coupé can coast in freewheeling mode with the engine deactivated and then restarted comfortably via the BAS. 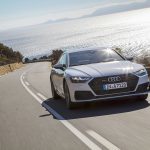 The start-stop function has been significantly expanded and now activates at 22 km/h. In combination with the standard front camera, the engine is restarted predictively while at a standstill as soon as vehicle ahead begins to move. The four-door coupé sprints from 0 to 100 km/h in 5.3 seconds and is paired with a seven-speed S tronic. Its quattro drivetrain uses the efficient ultra-technology that activates rear-wheel drive as needed.

The body concept: Coupé, Sedan and Avant in one

The A7 Sportback combines the best of all worlds and is a dynamic all-around talent for business and recreation. It offers the design of a coupé, the spaciousness of a sedan and the variability of an Avant. The interior concept of the A7 Sportback impresses with more space and more comfortable seating – and that despite having a dynamic roofline. Compared with the previous model, interior length has increased 21 millimetres, resulting in more rear knee room. Rear passengers also enjoy more head room. The loading width has also increased compared with the previous model and now measures 1,050 millimetres. 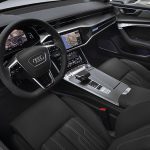 Despite the markedly dynamic lines, the luggage compartment has a base capacity of 535 litres. This increases to 1,390 litres with the rear seats folded down. The luggage compartment has been optimized so that two golf bags now fit horizontally – in addition to the optional spare tire. The optional sensor-controlled rear hatch opens and closes automatically in response to a foot motion.

The new Audi A7 55 TFSI Sportback quattro S tronic is priced at R 1,250,000 and comes standard with the 5 year / 100 000km Audi Freeway plan, inclusive of all taxes. The new vehicle is currently available for sale at all Audi Dealerships around South Africa. The S7 Sportback will be included into the range in quarter one next year, followed by the high performance model, the Audi RS7 Sportback to be launched in the second half of 2020.