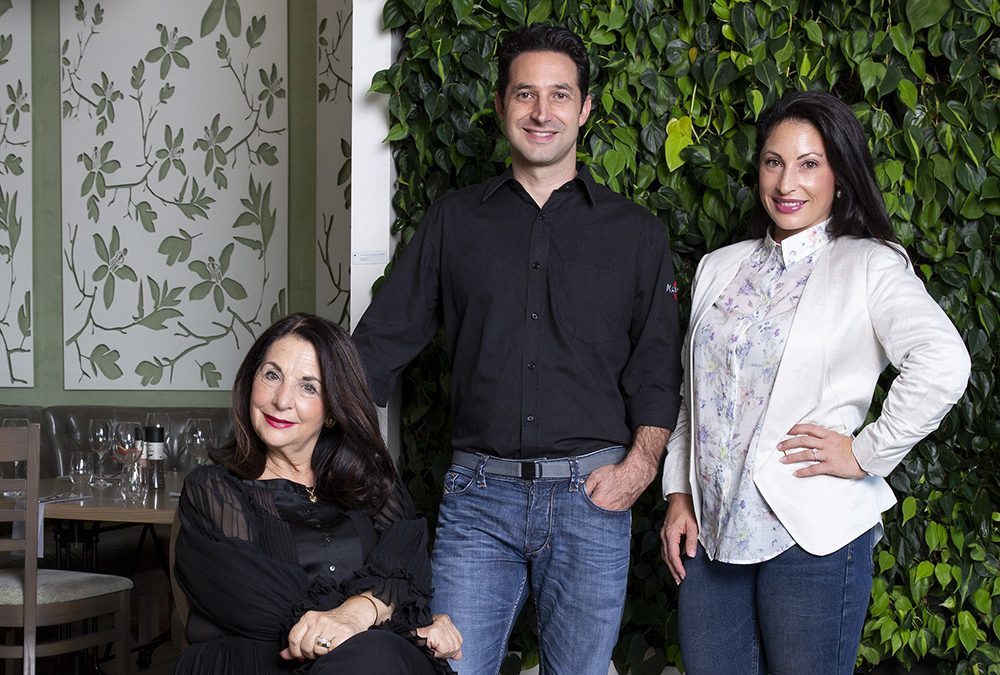 The story of Café del Sol is the story of a family. Jamie Oliver may have had to travel the length and breadth of Italy to discover the culinary wisdom of Italy’s legendary Nonnas, but Chiara and Ryan Viljoen grew up with a real Bresciana Nonna in their kitchen, cooking northern Italian cuisine for the family, served religiously at midday and 6pm.

“She spoke only Italian and cooked only traditional recipes,” says Chiara. “But she would teach anyone who asked… lasagne, panzerotti, ravioli. Her recipes were famous.”

Chiara and Ryan grew up at her knee, as well as spending time with their Genovese Nonna almost every weekend, eating frittata and pesto pasta as an afternoon snack with tea. Immersed in traditional Italian culinary culture, Chiara and Ryan had a front row seat from the very beginning with both Nonnas, while their mother, Luciana Treccani, continued the legacy and kept the recipes alive among the steaming pots and sizzling pans. “Entertaining was always central to our lives,” says Chiara, recalling the gatherings at her family home, and how the roles they have now were forged – Luciana in the kitchen, Chiara orchestrating the event and setting table, and Ryan putting on music, and later, selecting wine.

“People used to say – open a restaurant so we don’t have to wait to be invited,” says Chiara. And even before the family launched Café del Sol (now Café del Sol Classico) in Olivedale 12 years ago, she recalls, “People would bring dishes for my Nonna, and later Mamma Lucia, to fill and take home.” Cooking, serving and hospitality were central to family life. “The first ingredient in any dish is love.”

Café del Sol Classico, Chiara explains, was conceptualised as a reincarnation of Mamma Luciana’s kitchen, creating nourishment for body, mind and soul. It wasn’t, however, a straightforward trattoria. Rather, the family invented a new-age inflection of traditional Italian hospitality. “We really wanted a concept that would inspire people and touch their hearts through the food,” says Chiara. The focus was still on the experience of dining together, but the desire to nourish and nurture found its way into a philosophy defined as much by a sense of abundance and wellbeing as food and flavour. “Life happens in the present moment,” says Chiara. “Dining is one of those experiences. Savour the moment; savour the food.”

True to Luciana’s Italian heritage, Café del Sol Classico served traditional Italian food with refinement and flair – taking Nonna’s culinary traditions and giving them a contemporary spin that satisfied diners’ desire for comfort and nostalgia as much as something to awaken and inspire their palates. The simple, unpretentious elegance of the décor, the uplifting quotes adoring walls, floors and napkins, dovetailed with a desire to create “food for body, mind and soul”. The focus on fresh, seasonal ingredients and honest simplicity at the heart of Italian cooking crystallised perfectly with the impulse to nourish and sustain body and soul.

Café del Sol’s legendary pastas became culinary landmarks – even the simple Napolitana with basil is the stuff of legend. Nonna’s ragu, gnocchi, seafood risotto and stuffed calamari have remained staples on the menu since the very beginning. “We have some regulars who come in after years and still order the same dish,” says Chiara.

Popularity, loyalty and slew of Eat Out awards followed, and, in due course, a new incarnation.

If Café del Sol Classico is Nonna’s kitchen, then Café del Sol Botanico, which opened some years later in Bryanston, is Nonna’s dining room. Rather than repeat the formula the family had perfected in Olivedale, they reinterpreted it for a different audience and a new setting. Inspired by the juxtaposition of the Joburg’s urban forest and the Sandton Skyline on the horizon, Café del Sol Botanico once again drew on Luciana’s personality and interests. This time, her fascination with botanical knowledge, flowers and vegetables saw the Café del Sol spirit reinterpreted as an urban green space. Up sprang a lush conservatory in the city with botanical art adorning the wall, a vertical garden and a sense of freshness and vitality in the décor and ambience.

The menu carries across some of the Classico favourites, but on the whole lightens things up with southern Italian influences, which Chiara and Luciana studied at the Italian Culinary Institute in Calabria. Not only did they introduce contemporary flair in coloured pastas, for instance, but they also made use of the larger premises to add a pizza oven and to explore new dimensions of flavour, depth and technical ability with the addition of a Jospur oven and sous-vide.

Additional facilities like a chef’s table in a private room – fully kitted out with HD projector and whatever else you might need for business events or presentations – are another benefit of the additional space, and add a different to the potential of what Café del Sol Botanico can offer.

The addition of The Landmark Bar – a kind of night-time counterpart to the restaurant’s light, daytime ambience – brought a masculine urban edge and another remarkable dimension to the Café del Sol experience. The wine list, under Ryan’s direction, was awarded diamond status at the 2018 Diners Club Winelist Awards, and the sophisticated cocktail menu has placed The Landmark among just four WORLD CLASS™ bars in Johannesburg under the international rating system.

An abridged menu is also available at The Landmark, offering Aperitivo or even a pizza or light meal. “Italians don’t serve drinks without food,” says Ryan. “It’s just not done. There’s never one without the other.” So Café del Sol’s hospitality spills over into the adjacent space, which is the perfect venue at which to extend an evening at Café del Sol Botanico with a digestif or after-dinner drink.

In keeping with the urge to share, act with generosity and follow her passion, Chiara has recently resurrected the highly successful Flavour Academy by Café del Sol, a unique series of cooking classes that offer patrons and fans the opportunity to learn Café del Sol’s unique fusion of regional Italian recipes alongside Chiara and the team.

“We love to share our passion for Italian cuisine, and The Flavour Academy offers us a new avenue through which we can realise our purpose of touching people’s hearts through food,” says Chiara, reiterating the philosophy at the very heart of Café del Sol: “Love creates more.”

Café del Sol is open for lunch & dinner from Tuesday to Saturday and for lunch only on Sunday from 12h00 till close. Kitchen Hours: 12h00 to 15h00 & 18h00 to 21h30. Booking is essential. Booked tables are held for 20 minutes only, unless notified the table will be released for other patrons.