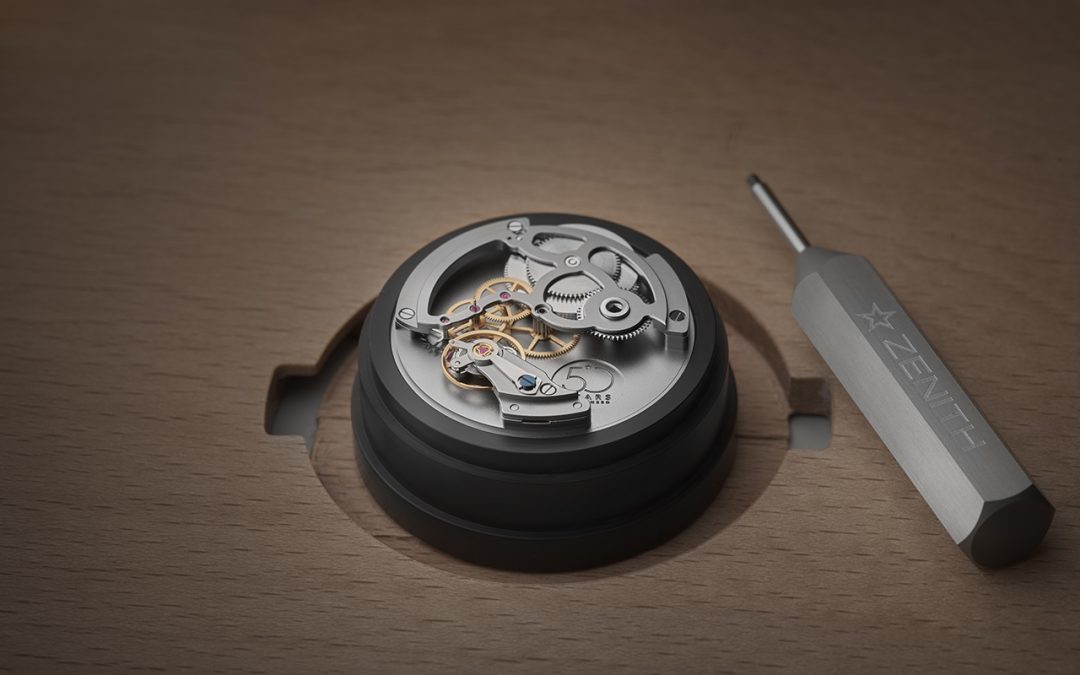 The legendary El Primero high-frequency chronograph celebrates half a century of avant-garde and precision. In tribute to its legendary destiny, Zenith is offering aficionados an anniversary boxed set containing three chronographs with emblematic tricolour counters. A reissue faithful to the first El Primero model of 1969; a Chronomaster El Primero with optimized movement; and a Defy El Primero 21 to 1/100th of a second: the 50-piece limited-edition trilogy ‘conjugates’ high frequency in several tenses.

Past, present and future. El Primero has been flowing through the veins of Zenith for 50 years. The history of this high-frequency star, born in 1969, continues today and tomorrow, with the iconic Chronomaster El Primero and the futuristic Defy. To celebrate the unique destiny of El Primero – the world’s first integrated and most accurate automatic chronograph –, Zenith invites you on a journey through time. The anniversary set contains three El Primero models retracing the technical and aesthetic evolution of this precision legend. Presented in a box mingling technology with tradition, this collector’s trio with ‘signature’ counters panders to every desire: vintage, classic or modern. Meanwhile, a still-empty fourth cushion sits ready to welcome the next achievement of Zenith in the universe of very high frequency: 1/1000th of a second! 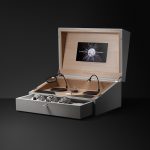 Since January 10th 1969, the date when the famous El Primero (‘the first’ in Spanish) chronograph was presented, Zenith has been brightly glowing in the firmament of high frequency. Continuously enriched with new technical and aesthetic advances, the undeniable icon of precision has been available for half a century in the Manufacture’s collections. Flashback to the late 1960s, marked by a horological revolution: the birth of the El Primero, the first ever automatic chronograph. Its innovative features – a rate of 36,000 vibrations per hour, integrated column-wheel construction, a central rotor mounted on ball bearings and over 50 hours of operating autonomy (a real feat for such a high frequency) – made it the most accurate chronograph in the world and the only one capable of measuring short times to 1/10th of a second. In addition to these revolutionary performances, El Primero established new visual codes, with a range of contrasting colours that enhanced the readability of the counters: light grey for seconds, blue for minutes and anthracite for hours. This combination would quickly become an emblem of the Maison. 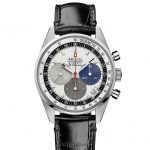 While El Primero has constantly evolved since its invention, inspiring new creations to the point of becoming an archetypal model prized by connoisseurs, Zenith had never yet offered a reissue faithful to the original model. This has now been done, since the anniversary boxed set, in a 50-piece limited edition, includes in its first compartment a perfect reiteration of the 1969 El Primero chronograph. A historical first that endows this vintage watch with a special aura and potent symbolism. The 38 mm steel case, curved glass with magnifying effect, tricolour counters, tachymeter scale, font, the shapes of the hands and hour-markers, as well as the leather strap: all the original codes are resolutely present. Likewise, the shape of the lugs and mushroom pushers are exactly reproduced on this pure “revival” watch. To give a new lease on life to the spirit and the original attributes of its illustrious predecessor, Zenith’s engineers and designers carried out a reverse engineering process: an authentic copy of the brand’s museum was entirely laser-scanned to restore each component. The only liberties that have been taken are the fact that the initially solid back now reveals the movement without hindrance and that the crown logo has been updated. As for the ‘engine’, it’s the current version of the El Primero column-wheel chronograph movement, beating at a rate of 36,000 vibrations per hour and delivering 1/10th of a second precision as well as a 50-hour power reserve. Like the original, it displays the hours, minutes and small seconds, chronograph, tachymeter and date functions, the latter appearing between 4 and 5 o’clock.

A direct descendant of El Primero, the Zenith Chronomaster is its most emblematic contemporary embodiment. A Chronomaster is recognisable at first sight. Its imposing stature, iconic design and high-frequency mechanism are embedded in the Manufacture’s DNA. Therefore, to celebrate the legendary model from which it originated, the second watch in the case is a Chronomaster, equipped with a new-generation El Primero engine and a new black ceramic bezel. Renamed El Primero 3600, its movement is presented in an optimised version, an update conducted in accordance with the architecture and proven performance of the legendary El Primero. This high-frequency calibre, beating at 36,000 vibrations per hour, achieves the feat of accurately measuring one tenth of a second and offering direct readings on the dial and bezel. In other words, the chronograph hand makes one dial turn in 10 seconds, indicating at each jump the tenth of a second on a scale graduated from 1 to 100. With this 2.0 version, the original construction of the El Primero chronograph, consisting of a column wheel and a lever-operated lateral clutch, is visually highlighted and redesigned to enhance its reliability and precision. The most obvious results are the integration of a stop-seconds device for time-setting and a power reserve increased to 60 hours. In addition to its maximised assets, the new Chronomaster has a sportier and more modern look than its contemporaries, featuring a 42 mm steel case topped by a graduated black ceramic bezel, a star-shaped oscillating weight and a rubber strap with contrasting stitching. 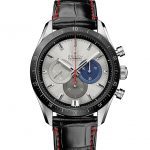 The last element of this trilogy, the Defy El Primero 21 chronograph, heralds the watchmaking of the future. A future that holds exceptional achievements in store, as suggested by the fourth cushion of the case, deliberately left empty to accommodate Zenith’s next feats in the field of extreme high frequency. But for now, it’s time for the present, with the Defy El Primero, the ultra-modern embodiment of the legendary El Primero. Beating inside its imposing 44 mm titanium case is a revolutionary mechanical movement. Oscillating at a frequency of 360,000 vibrations per hour (50 Hz), ten times higher than its predecessor, it measures and displays one hundredth of a second on a scale from 1 to 100. Its exclusive dynamic signature – the lightning-quick hand making a full turn of the dial in one second – reflects the exceptional precision and performance of this engine stemming from modern engineering with two independent “gearboxes” on board: one for the time and the other for the chronograph. Its skeleton dial features three solid counters in the original colours – the common denominator of this “tribute” edition – and its contemporary lines, formed by a large fluted crown, flat pushpieces and short lugs, merge seamlessly onto the wrist by means of a black rubber strap covered with black alligator leather.

Each issued in a 50-piece limited edition, the three El Primero anniversary watches, as well as the empty cushion designed to accommodate a future 1/1000th of a second chronograph, are presented in a boxed set that also symbolises Zenith’s evolution and future in the field of high frequency. Subtle nuances of grey, leather touches, contemporary woodwork: the presentation box combines watchmaking tradition with innovation in performance and precision. Adorned with the anniversary logo, the satin-brushed grey lid with built-in touch screen opens to reveal a reproduction of a miniature watchmaker’s workbench, complete with a watch mechanism on a rest, adjustable lighting system, magnifying glass and screwdriver. The screw-locked lower part of the box contains a drawer in which the three El Primero chronographs are nestled. In a nod to the past, the box contains an actual die of the chronograph’s coupling-wheel bridge (one of the emblematic components of the El Primero movement). This die is an invitation to purchasers to come and visit the Manufacture in Le Locle and to hand-stamp two coupling-wheel bridges. One will leave with the purchaser in his box, and the other, engraved with his name, will be placed as historical testimony on the entrance wall of the famous attic chosen by Charles Vermot, the Zenith watchmaker who – in the midst of the quartz crisis in the early 1970s – saved the elements essential to the production of the El Primero calibre from destruction by secretly keeping them in that same attic and thus enabled its renaissance in 1984. 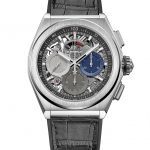 ZENITH: The Future of Swiss Watchmaking

Since 1865, Zenith has been guided by authenticity, daring and passion in pushing the boundaries of excellence, precision and innovation. Soon after its founding in Le Locle by visionary watchmaker Georges Favre-Jacot, Zenith gained recognition for the precision of its chronometers, with which it has won 2,333 chronometry prizes in just over a century and a half of existence: an absolute record. Famed for its legendary 1969 El Primero calibre enabling short-time measurements accurate to the nearest 1/10th of a second, the Manufacture has since developed over 600 movement variations. Today, Zenith offers new and fascinating vistas in time measurement, including 1/100th of a second timing with the Defy El Primero 21; and a whole new dimension in mechanical precision with the world’s most accurate watch, the 21st century Defy Lab. Energised by newly reinforced ties with a proud tradition of dynamic, avant-garde thinking, Zenith is writing its future… and the future of Swiss watchmaking.